Several years ago, Taylor’s Fladgate had what might be described as a eureka moment. Instead of using precious, ancient and irreplaceable pipes of Port into their 40-Year Old Blend for example, why not see if there is a niche market for limited launches of historical fortified wines? So, we witnessed releases such as the 1855 Scion and the 1863 Single Harvest Port. They were critically lauded and sold well, as their luxurious prices matching their luxurious, no expense spared packaging. Others quickly followed suit, for example, Graham’s Ne Oublié Tawny.

The latest addition is the 1896 Taylor’s Single Harvest, which differs from the aforementioned launches as it was born after the Douro Valley was ravaged by phylloxera, ergo, it is likely to have come from a mixture of surviving old vines and new plantings grafted onto American rootstock. It would have then been foot-trodden in granite lagare, 20% spirit from distilled Portuguese wines. Eighteen pipes of the 1896 were registered and set aside by shipper Wiese & Krohn, tended by generations of cellar masters, until the shipper and its reserves were acquired by Taylor’s Fladgate in 2013. The 1896 provides an intriguing comparison with regular Vintage Port, aged in bottle and undergoing micro-oxygenation, and a Tawny Port, that spends its entire life in wooden barrel. Throughout its 125 years, evaporating at an average of 2% per annum (incidentally, that figure is higher in the first years and lower as it ages) those original 18 pipes were racked until just two pipes of intensely concentrated Port remained, equivalent to around 1,700 bottles. 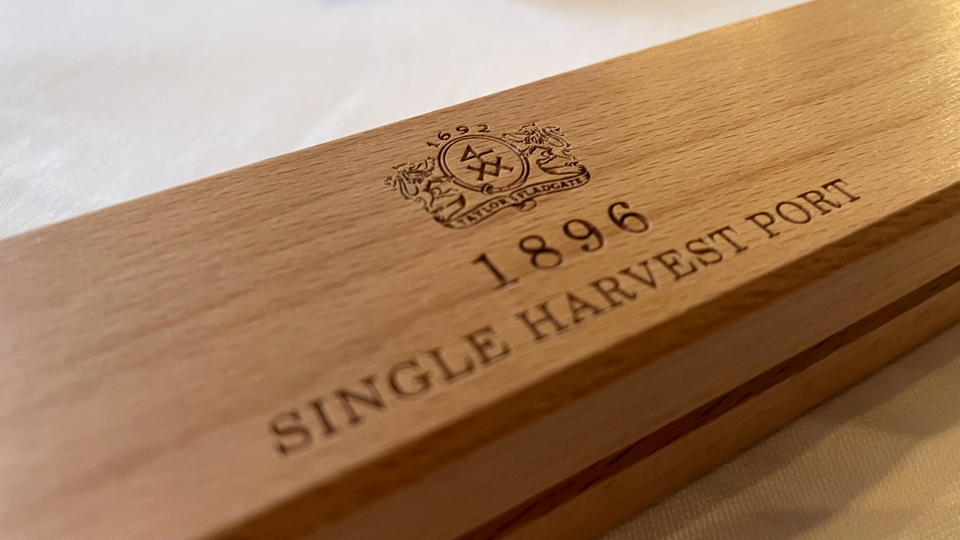 So, what does it taste like? It has a greenish, tawny rim, quite deep at its mahogany core more than you would expect for a Port of this age. The nose is quite arresting, does not hang about, delivering a cornucopia of aromas: grilled walnuts, espresso, smoke, antique bureau and dried fig, all extremely well defined. Monitoring this over three or four hours, it gains intensity, hints of liquorice and menthol joining the chorus line, just the right amount of volatility. The palate is medium-bodied, slightly viscous on the entry, very spicy with sweet honey and brown sugar notes, completely offset by the combination of natural and volatile acids. Despite its age, this is a fiery Port with extraordinary lingering notes of Japanese shiso leaf, fig jam, damson and stem ginger, clean and poised with that volatility kicking towards the finish. This has wonderful sweetness, with 218g/L residual sugar that counters any oxidation. At around £4,000 per bottle, it is not inexpensive. But you are paying to drink history, knowing that it will never be released again. Of course, this 1896 is ready to be drunk now, but such is its concentration and vigour, that it could be cellared if you insist on your fortified wine being at least 125 years old. 98
Tweet