It seems difficult to believe now given the current state of the market, but Sauternes was the most sought-after and most expensive Bordeaux at the turn of the 20th century. This Cellar Favorite hails from that era, testament to the greatness and unerring longevity of Sauternes...and it does not have to begin with the 25th letter of the alphabet. Château d’Arche might not be the best-known Sauternes, although it has aristocratic beginnings. The estate was founded by the Comte d’Arche in the 18th century. It was listed as a deuxième cru in the 1855 classification only because a division enforced by the Revolution had lessened its importance. At the time the proprietor was “Bastit-Saint-Martin” and all I can tell you that Comte d’Arche won a “diploma of honour” at the Milan International expo in 1906. For many years the château produced a Crème de Tête although I can only presume this was a selection from the choicest parcel in great vintages, and 1906 was a bona fide stupendous, if now forgotten, Sauternes vintage. I thank Mr. D for sharing this bottle.

The 1906 d'Arche Crème de Tête is quite simply one of the greatest Sauternes ever produced. It is up there with the pinnacle of d’Yquem, albeit cut from a different cloth. It is extraordinarily deep in colour, almost like an extremely old Tokaji, verging on black/deep brown even when poured into the glass. Don’t be perturbed by its appearance. It has an astonishing nose: intense aromas of fig syrup, rosewater, Seville orange marmalade, molasses and blood orange. The palate is supremely well balanced, with a perfect line of acidity. The intensity is off the scale. Perhaps its nearest comparison in my experience is the 1929 Yquem however, this is more Aszu-like and perhaps a little more caramelized. Viscous in texture and disarmingly pure, perfectly balanced with orange zest, quince, star anise, kirsch and Manuka honey, it can be said that this otherworldly d’Arche is not old but rather timeless. 99/Drink: 2018-2040 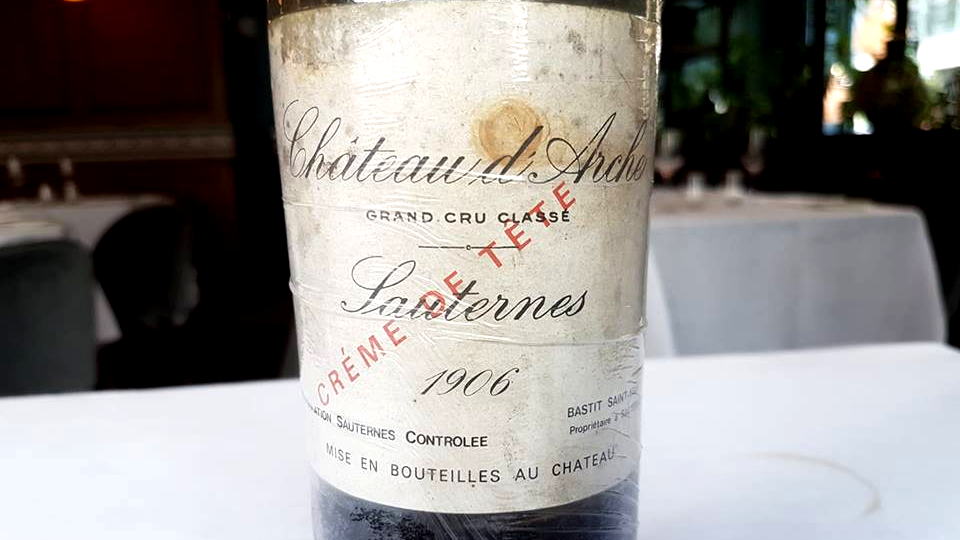