Perusing Michael Broadbent’s indispensable Vintage Wine tome, I marvel how he tasted multiple Bordeaux wines from practically every growing season since the early 19th century. Inspired by the late author, a couple of years ago I set myself the task of tasting a Bordeaux wine from every vintage in the 20th century. I’m not far off; just five short, and they are predictably poor prewar vintages that are hardly ever seen, namely 1901, 1903, 1910, 1915 and 1932. One that I thought I would never taste is 1931. There might have been a legendary Port at Quinta do Noval that year, but Bordeaux suffered a run of miserable growing seasons between 1930 and 1933. Quoting Yquem’s official and, I must say, extremely informative website apropos of 1931: “A year with fairly regular weather until late June, but that went off the rails from July to September, with heavy rains and glacially cold temperatures, vine diseases, and even hail on the 6th of August. The rain stopped on the 18th of September, but only a barrel’s worth of wine managed to reach 20° potential alcohol. Not a success, despite 39 days of intense work.” Not exactly positive, is it?

Add to that the backdrop of the Great Depression and the consequent evisceration of wine markets, and the 1931 d’Yquem was born at the wrong time. Even Broadbent suggested that it is a one-star wine “at best,” though that was still better than the previous year, when no Yquem was declared at all. Given all of that, you would think that any bottles should have been poured down the sink before the war. 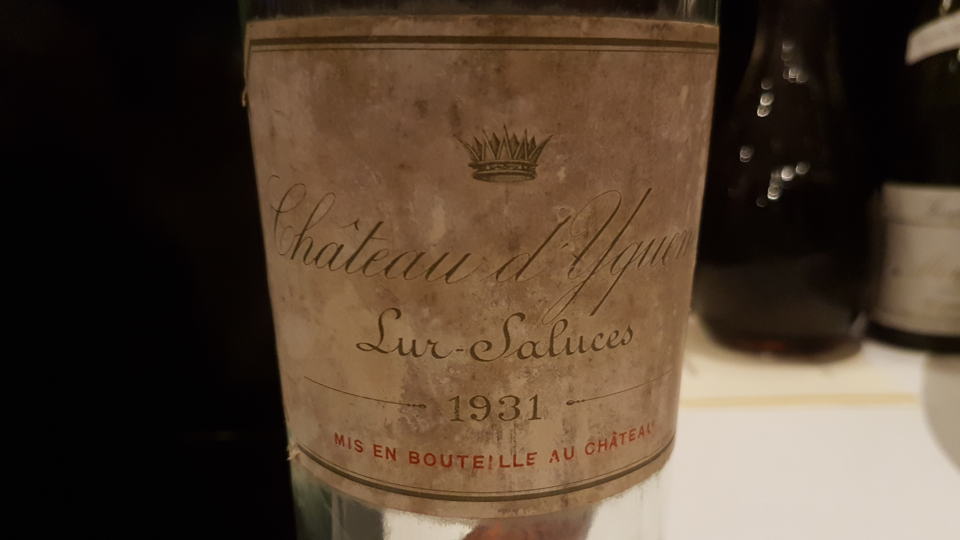 Well, no. Defying all the odds, this Sauternes provided much pleasure to a group of wine lovers, a fitting finale to a memorable Burgundy dinner. Not a success? I beg to differ. The 1931 d’Yquem, picked between September 22 and November 5, is burnished deep amber in color. Initially there is quite a pungent adhesive scent on the nose, chaperoned by a whiff of swimming pool, a trait often found on old Sauternes and particularly off-vintages. With continued aeration the 1931 reveals faint aromas of satsuma and stewed apricot, plus hints of white mushroom in the background. The palate is surprisingly lovely – well balanced with a fine bead of acidity. This is by no means a complex d’Yquem, and it is clearly short in persistence, yet it still offers enjoyment. There is no sign of gray rot, while the wine has retained satisfying freshness. While not the greatest d’Yquem by a long shot, the 1931 far exceeds expectations and deserves a salute. 90/Drink 2020-2028.