Over the last two decades I have visited practically all the major domaines in the Côte d’Or. There is one glaring and unforgivable omission: Ramonet. During Hospices weekend last November, I thought that finally I would at least shake hands with one of the family, when a friend, Mr. O, invited me to join him for the opening of a “special bottle” with Noël Ramonet. Unfortunately, I had a prearranged tasting that Saturday morning, so I was denied once again, but at least I was able to get down to Chassagne-Montrachet and taste the bottle at retail shop Caveau de Chassagne later that morning. 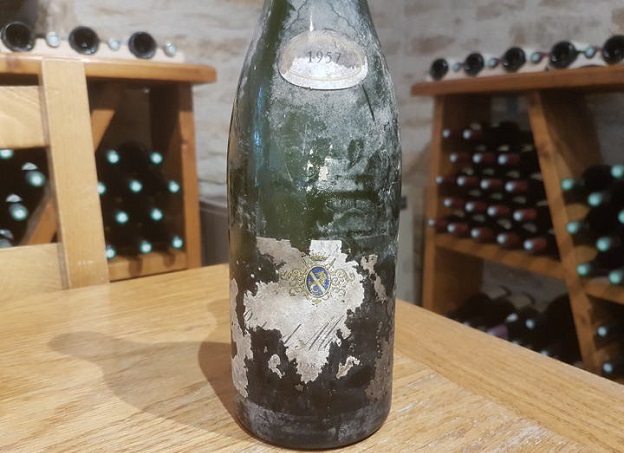 The 1957 Bâtard-Montrachet Grand Cru is easily the oldest bottle I have encountered from the domaine. This vintage was blighted by a severe late-spring frost that almost entirely decimated the Chardonnay crop. I discovered that it was also a significant vintage for Ramonet because it marks the first time that Pierre Ramonet’s brother Claude helped make the wine. Claude Ramonet is not as well-known as Pierre and his grandsons Noël and Jean-Claude. Claude never had any children and passed away in 1977. Presumably he worked alongside his brother, who ran the domaine up until 1984. The bottle was tatty in appearance, much of the label torn away over the years, though thankfully with sufficient information left intact to identify year and cuvée, along with Ramonet’s distinctive crest. First I noticed the wine’s refulgence. Yes, there was a slight burnished hue, but the glass seemed to glow. The bouquet remains vigorous, offering dried honey, marmalade and overripe satsumas, as well as traces of melted wax and lanolin. The palate does not disguise some oxidation, which began creeping into the nose during the 15–20 minutes I spent with the wine, touches of flor developing with time. There is impressive weight and concentration, and plenty of energy given the wine’s age. The finish is quite robust, nutty and overtly saline, though frayed by the passing years; it does not quite convey the class of the aromatics. Overall, this 62-year-old Bâtard-Montrachet defies the traumatic growing season of its birth and, decades later, manages to leave an indelible impression – a wine that has decayed but retains a firm foundation. 92/Drink 2020-2028.

My thanks to Mr. O for inviting me down to taste this rare bottle.