Though Grange is Penfolds’ most famous label, that has not always been the case. Back in the late Fifties and early Sixties, their St. Henri was more popular, probably due to its being more approachable and elegant, while Max Schubert’s Grange demanded cellaring. The name “St. Henri” dates from the 19th century. It debuted in the 1890s courtesy of Frenchman Léon Edmund Mazure, who introduced Australia’s first sparkling wines and incepted the St. Henri label, most likely in honor of his son and his wife, Henrietta. In its early days, winemaker John Davoren sourced fruit from the Auldana vineyard where Mazure had made his own “St. Henri,” but fruit also came from Magill, Morphett Vale, Modbury, Paracombe and Adelaide Hills and was blended with Cabernet Sauvignon from Kalimna. Until the early Sixties there was also a significant contribution of Mataro, a.k.a. Mourvèdre, though these vines fell victim to Adelaide’s urban sprawl. Unlike today, the wine contained stalks and was foot-trodden in open-ended hogsheads. This incredibly rare bottle was the first commercial release of St. Henri after winemaker Davoren began experimenting with the blend in 1953. It was served in Berlin as part of a “Rewards of Patience” vertical that included every vintage to the present, though curiously, when I delved back into the book, there is no mention of this vintage (I suspect the reference to the 1956 might be a typo). 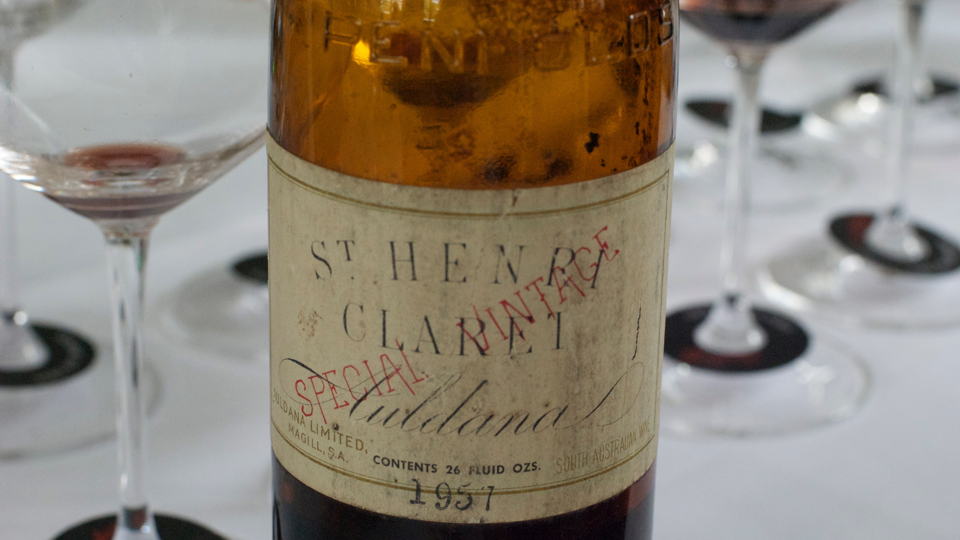 The 1957 Penfolds St. Henri Claret is the maiden commercial release of the wine renamed St. Henri Shiraz. It has a deep dark mahogany core with a tawny rim. Initially it appears excessively volatile, yet miraculously, returning to my glass after 20 minutes, I find that it has settled down to reveal a sedate but compelling nose of menthol, Chinese tea, rosewater and a touch of licorice. The palate is medium bodied, with crisp acidity on the entry. It feels degraded but fleshy in texture, revealing notes of orange peel, strawberry, cedar and leather toward a tapered finish that soon fades. Overall, this is a nuanced 1957 that understandably comes across a touch fatigued. But it is a beautifully balanced wine, and unquestionably one of great historical significance for the Australian wine industry. 89/Drink 2020-2020.