I have been fortunate to taste the legendary Château d’Yquem a number of times since the early 1980s but hadn’t had the opportunity to actually drink it in many years. That was until a generous friend brought a surprise bottle along to an indulgent Château Petrus vertical this fall, to be shared among a small group of wine lovers at the outstanding Peppercorn’s Grill in Hartford, Connecticut.

With the possible exception of the 1945 and 1928 Yquem, the 1967 is, by most people's reckoning, the benchmark Sauternes of the 20th century. This bottle more than lived up to that reputation. Deep gold in color, it offers up a dizzying array of scents ranging from singed orange peel, caramelized pear, apricot nectar, fig cake, honey, toffee and turbinado sugar, with flavors to follow. Its viscous texture completely envelops the palate and the finish, if one can reasonably even call it a “finish”, as the wine seems to go on forever. This hauntingly complex, powerful yet shockingly lively Sauternes could be served with all sorts of decadent desserts, but it really deserves to be appreciated by itself, especially since one never knows when another chance to experience it might come around again. 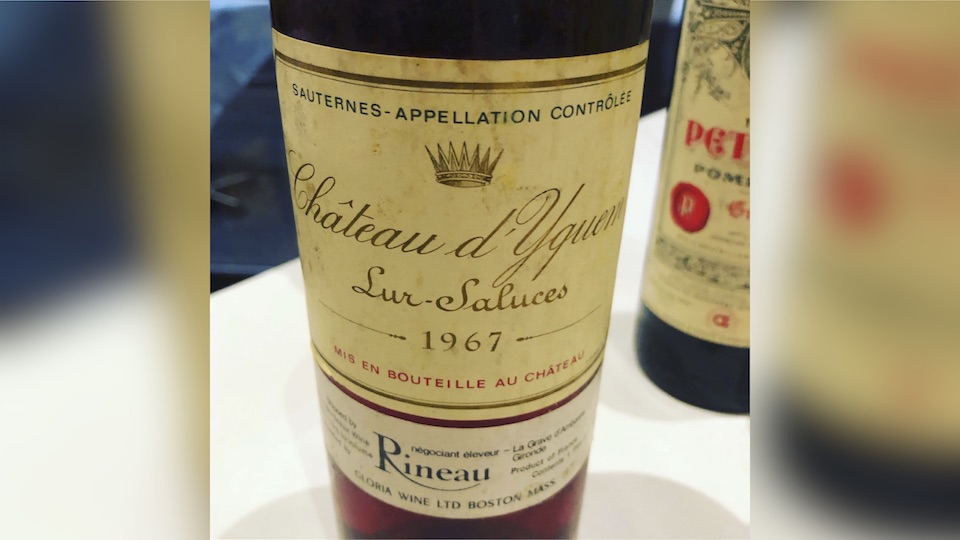 Such is the fame of this wine that it has single-handedly given the 1967 vintage in Sauternes and Barsac a huge reputation when, in fact, it was actually a pretty average year for the wines, overall. On top of that, almost all of the sweet wines from 1967 are past and even well past their prime at this stage. That’s emphatically not the case with this Yquem, which is one of the most spell-binding wines that I have had the chance to drink in years, even decades. There’s no question that, at 53 years of age, the 1967 is at or near peak, but well-stored bottles should easily be breathtaking for at least another two decades, perhaps longer. 99/Drink 2020-2040.