Last April I attended a tasting of bottled 2017s from Domaine Arnoux-Lachaux in the offices of their UK agents, Corney & Barrow. It was a welcome diversion from thinking about my impending heart surgery. Following the tasting, winemaker Charles Lachaux served a bottle blind and asked me to guess the vintage. It turned out to be my birth year. Lachaux told me that he had purloined the bottle from his family’s cellar for no other reasons than to share a lovely old wine and keep me chipper. Well, it did the trick, but it did more than that. I must confess that I never really warmed to Charles’s father’s wines. Pascal Lachaux often picked a bit late and rather over-egged his wines in the winery, especially in terms of new oak. Charles has taken the domaine in the opposite direction, guided and inspired by no less than Lalou Bize-Leroy. I had never tasted a bottle from the era of Charles’s grandfather, Robert Arnoux, whose passing in 1995 led to his son-in-law taking over. But this bottle revealed a connection between Robert Arnoux and Charles Lachaux’s approach to winemaking; it was far more elegant and refined than I would have imagined, even taking account of its age. 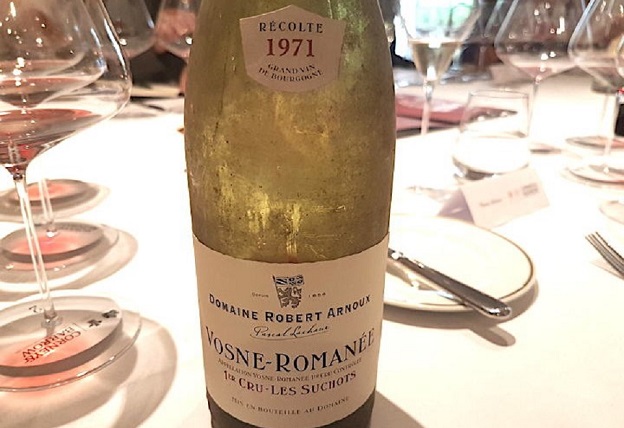 The 1971 Vosne-Romanée Les Suchots 1er Cru is clear in color with modest bricking. The heavenly bouquet is exquisitely defined, offering vestiges of red berry fruit intermingled with bay leaf, undergrowth, tea leaf and a hint of balsamic. The palate is not powerful and arguably lacks the substance of the very best Côtes de Nuits from this vintage, yet there remains a sense of energy and nervosité that is extremely appealing. Slightly tart in style, featuring a refreshing sour cherry note mixed with soy and seaweed on the finish. A delightful Les Suchots that continues to give pleasure. 93/Drink 2019-2029.