Though the bottle is still on the other side of the room on its way to the dining table, I instantly register that it is a) exceedingly rare and extraordinarily expensive and b) already open for serving. The thought that goes through my head is: “Is that really what I think it is?” On the journey home I invite my passengers and fellow guests to look up the price of the bottle that they glugged back. Their eyes nearly pop out of their heads. The 1975 Riesling Scharzhofberger Trockenbeerenauslese from Egon Müller was not encountered in the Mosel, but in rather Bordeaux. Müller had generously left the bottle as a parting gift, and the lucky recipient  decided to share it with a group of visitors. Later that night I enquire whether our host had been aware of its rarity, production hovering around a miniscule 30 to 40-litres and price that hovers in Romanée-Conti territory. Apparently he was. Momentarily relieved of its monetary worth, we could enjoy this Riesling for its sheer pleasure. 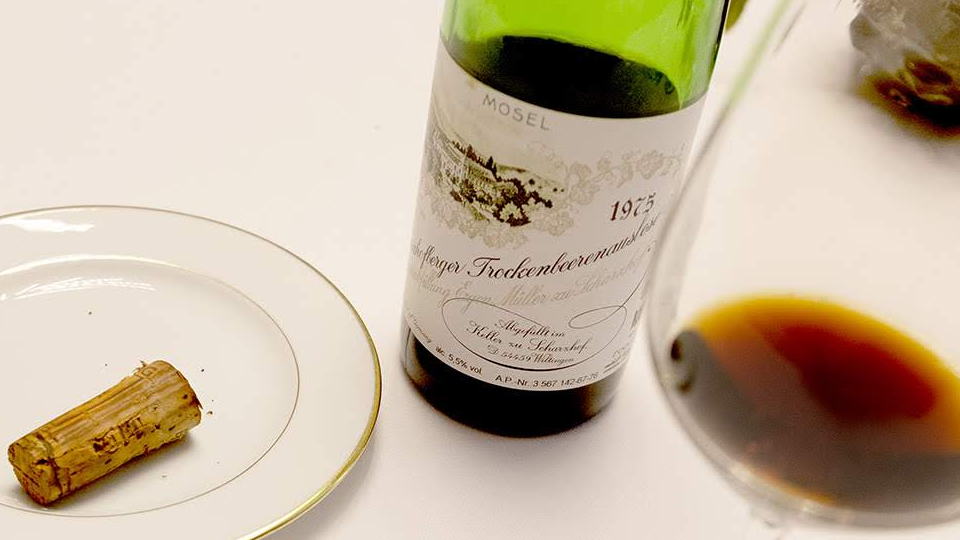 The 1975 is refulgent deep amber in color with a reddish/brick rim. I cannot recall Rieslings of this age so limpid in the glass. The bouquet wraps itself around your senses and renders you helpless by its charm: copious red plum, hoisin, honey, fig jam and hints of quince, all delivered with breath-taking delineation. The palate redefines the notion of balance and precision, the payload of residual sugar effortlessly offset by its razor-sharp acidity that lends it paradoxical weightlessness and drinkability. The aromatics translate across onto the palate, especially the fig and quince, wrapped up in a viscous rather than unctuous texture and an extraordinarily long finish that you can feel 60 seconds after the wine has departed. It might well be the greatest Riesling that I have ever consumed. It is a mind-boggling 44-year old TBA at the peak of its powers; a wine that floored an audience blissfully unaware of its value, but completely aware of its astonishing quality. 100/Drink 2019-2100.