Hungarian Aszu Essencia has long been one of my favorite wines of all, given that to consume the similarly named but much more expensive Essencia regularly, would require a bankroll comparable to the GNP of a small country. Both wines are typical of the prosciutto-shaped Tokaji region of north-east Hungary, and are made mainly from the Furmint grape variety (Hungarians take this wine and its region seriously, to the point that the country’s national anthem thanks God that Tokaj szőlővesszein nektárt csepegtettél ("into the vineyards of Tokaj you dripped sweet nectar").

Aszu wines are made by adding 25Kg. (55 pounds) hods (puttonyos, in Hungarian) filled with air-dried (or aszu, in Hungarian) grapes to a dry base wine made mostly with Furmint. The number of puttonyos added greatly increases the texture and sweetness of the final wine. A six puttonyos wine has roughly 150 g/L residual sugar; Aszu Essencia wines clock in at least at 180 g/L residual sugar but were usually much more sweet than that. The term “Aszu Essencia” was introduced as an official quality level by the Communist regime in the 1960s, but had been used on labels already centuries earlier (such as in the case of the “comet vintage” of 1811). Nevertheless, as consumers always confused Aszu Essencia with the even more expensive Essencia, legislators have decided to move away from the Aszu Essencia category (2009 vintage was the last in which it appears on labels). 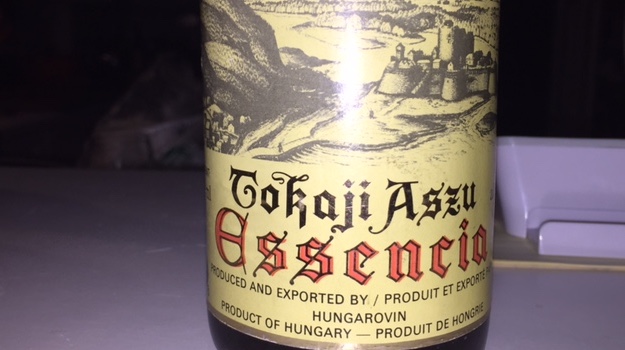 The 1976 Hungarovin Tokaji Aszu Essencia has a bright, dark golden-brick color and an absolutely mesmerizing, wonderfully complex nose of crystallized tropical fruits, caramel, date, raisin and orange marmalade, with rancio nuances. Firm acidity nicely frames the luscious white chocolate, caramel and date paste flavors on entry, but this turns progressively musty and almost bitter on the long finish. Clearly, noble rot wasn’t the only type of rot that hit the berries in 1976. Undoubtedly, triage in the Communist era at a state run wine estate was probably not what it should have been (I have had this wine numerous times over the last 20 years, and the musty note has always been there). Nevertheless, as the wine’s nose is memorable (95 points), I’ll be reasonable in my scoring. I’m not suggesting you buy this by the case, but should you come across a bottle, it does offer a lovely insight into a past long gone. 87/Drinking Window: 2016.
Tweet