The 1977 Cabernet Sauvignon Glen Ellen Vineyards from Chateau St. Jean is fabulous. Still deep, potent and massively structured, the 1977 is a real powerhouse. I can hardly imagine what it might have tasted like as a young wine! Dark fleshed fruit, iron, dried herbs, leather, spice and menthol give this virile, savory Cabernet myriad shades of dimension. At a spry 44 years of age, the 1977 retains considerable freshness and enough depth to drink well for many years to come. It is a fabulous example of this era of California and Sonoma Valley wine. Readers lucky enough to still own it are in for a treat. What a wine. 94/Drink 2021-2031.

Richard Arrowood made the 1977 during his distinguished tenure at Chateau St. Jean. He describes 1977 as a cool vintage with a long growing season. “Back in the day, it seems to me that the growing seasons were longer, and when the fruit reached physiological maturity, the brix levels were somewhat lower than what we still see today,” Arrowood told me recently. “If memory serves, that block [the west facing hillside across from the winery] always yielded wonderfully low pHs, high acids and proper sugar levels, from which I think it gave consistently outstanding results year in and year out. Mother Nature and [viticulturist] Phil [Coturri] gave us beautiful fruit and it was up to me to express its qualities or screw it up. Fortunately God protects fools and little children, and we were usually successful!” 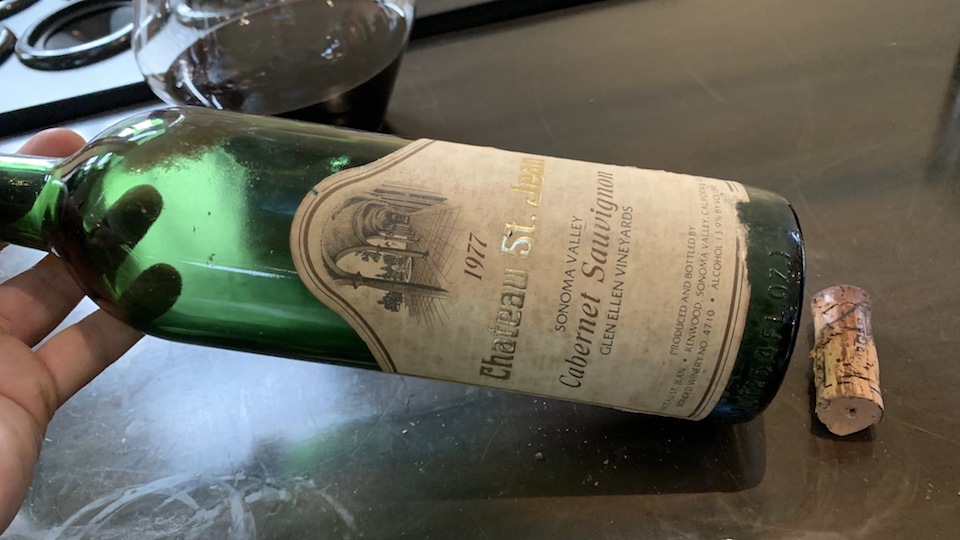 “When the fruit was received at the crush pad, we de-stemmed and crushed the fruit into stainless steel fermentation vessels as well as adding whole fruit without de-stemming to add a bit of additional fruit character through ‘carbonic maceration.’ Generally, we fermented our red fruit at lower temps (85F+/-) to preserve as much of the fruit character as possible, believing that you cannot develop fruit later if you don’t have it to begin with. Pumpovers were done several times per day until we reached negative brix. Free run was then drained off and the first pressing of the remaining pomace, at around 1/4 atmosphere pressure, was added back. The higher-pressure material was taken to another tank and combined with other press fractions and offered to be sold in bulk to other facilities. After several rackings over a period of 4 to 6 weeks the wine was transferred to oak barrels (80% French, 20% American) for aging (usually 22 to 25 months), new barrels comprising about 40%, with one racking prior to transferring to tank for final settling prior to bottling.”

“If memory serves me right, that Cabernet Sauvignon section served as the base wine of Chateau St. Jean’s Sonoma County blend as well as the individual vineyard designate. We were criticized at the time for making so many vineyard designated Cabernets and Chardonnays, yet after tasting, most of the wine critics felt that each one was indeed different with their own vineyard fingerprints.”

Needless to say, readers who own or can find the 1977 will enjoy more than a wine, as the 1977 represents a piece of history. Glen Ellen Vineyards, known today as Moon Mountain Vineyard, was founded in the late 1970s. The land is best described as a collection of well-exposed, terraced parcels on extremely rugged land on the eastern edge of the Moon Mountain District. Chalone acquired the property in 1980 and subsequently decided to launch a new wine brand. Wishing to avoid any conflict with the Benziger family and their Glen Ellen Winery, Chalone named their venture Carmenet. Chalone built a winery on site, rechristened the vineyard Moon Mountain Vineyard and stopped selling fruit to outside wineries. Moon Mountain Vineyard is now the home base for Repris, which is making distinctive hillside wines under the direction of owner Jim Momtazee and winemaker Erich Bradley.