Le Clos Joliette is a producer with an almost obsessive cult following. Whilst many might have never heard the name, I bet there are one or two readers going wobbly at the knees at the mere mention of this “unicorn” estate. I dislike that term. Yet Clos Joliette is certainly an enigma. There is a dearth of information on the internet and hardly any professional reviews, yet mature bottles are highly coveted and do not come cheap.

Le Clos Joliette is located in Jurançon: 1.8-hectares of Petit Manseng planted way back in 1929. The terroir is very special, and sits within a southeast-facing amphitheater in the foothills of the Pyrenees. The wine is matured in used oak for three or four years, apparently sourced from Château de Fargues in Sauternes. There are two cuvées, dry and sweet, and though it was not stated on the label, this must have been “Moelleux”. For many years Clos Joliette was owned by Parisian caviste Michel Renaud who sadly passed away in 2015. Since Renaud’s family did not want to continue tending the vineyard, it is difficult finding information whether a buyer was found. I hope so.

This mythical wine should not simply become part of history. I had only encountered a single bottle of 1970 before the 1978 Jurançon appeared at the end of a private dinner in Bordeaux. So what’s it like? Firstly the label... It is so simple yet evocative. No design company could dream of a label that evokes the depths of rustic France. It has a refulgent amber/golden hue. The nose that split the audience eliciting comments from: “That is unbelievable” to “I’ve never smelled anything like it” to “That is disgusting”. Me? I absolutely loved the show-stopping pungent scents of peaches and cream, mango, vanilla, marzipan and pralines mixed with candle wax and linseed oil. It knocks you sideways! The palate is slightly waxy in texture and continues to offer gorgeous over-ripe peach, apricot and pineapple notes intermingled with dried honey and a subtle rhubarb note on the finish. Whilst I can understand why some would dislike Le Clos Joliette, its singular aroma and taste make it so special and after 40-years, it seems to have lost none of its vigor. I cannot remember writing about such an enigmatic wine, but I guess that is part of its allure and fascination, and why faces light up on the rare occasion it appears. To the winemaker/owner whose name appears on the label, one Maurice Migne...merci. 95/Drink 2018-2032 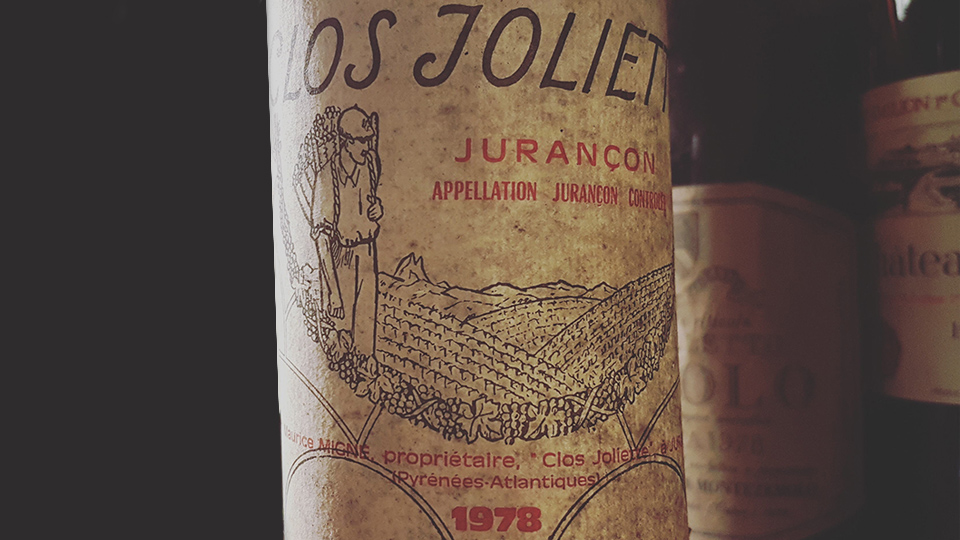