Here is a bottle rarely seen, if not quite as “unicorn” as the 2010 Bourgogne Blanc from Armand Rousseau that I reported on earlier this year. It was actually served as a freshener before a Christophe Roumier dinner – only in Hong Kong! The 1979 Perrières came with a Confrérie des Chevaliers du Tastevin neck label, the organization having approved this bottle back in 1981; the label perhaps provided a bit of extra marketing leverage and third-party validation, since this was before the domaine gained its global fame. Curiously, when I checked, there was no mention on the organization’s website. 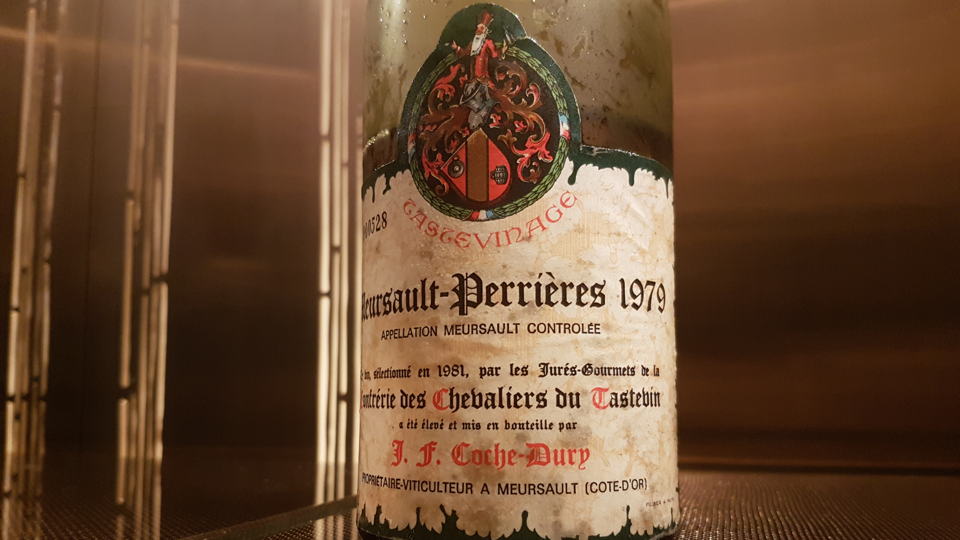 The 1979 Meursault Les Perrières 1er Cru has a burnished golden hue commensurate with its age. The bouquet is delightful, still fresh and well-defined, featuring dried honey, pralines, white flowers and just a suggestion of tinned apricot. Given the vintage, I am impressed by the stoniness of this Meursault, which articulates the vineyard with clarity. The palate may be showing its age and does not constitute the best Coche-Dury that I have tasted. Yet it is very refined and elegant in style, offering admirable salinity and orange pith and white peach toward the finish, plus a scintilla of nougat on the aftertaste. The 1979 does not boast the intellectual capacity of the very best Coche-Dury wines, but my word, it remains an absolute pleasure to drink! 93/Drink 2019-2030.