A lot of Condrieu is consumed in its youth. “It doesn’t really age,” remarked one friend. I recently tested the veracity of that statement when I joined a friend at Noble Rot restaurant, forewarning that I intended to serve a bottle completely blind without a clue how it would show. Personally, I have never drunk a Condrieu more than a decade old, but there is something thrilling about venturing into unchartered vinous waters.

Vernay is one of the most renowned Condrieu-based producers whose wines have become sought-after, especially their single vineyard bottlings such as the Chaillées de l’Enfer and Coteau de Vernon. Georges Vernay took over the estate in 1953 from his father Francis and remained in charge until 1996, putting Condrieu on the map. 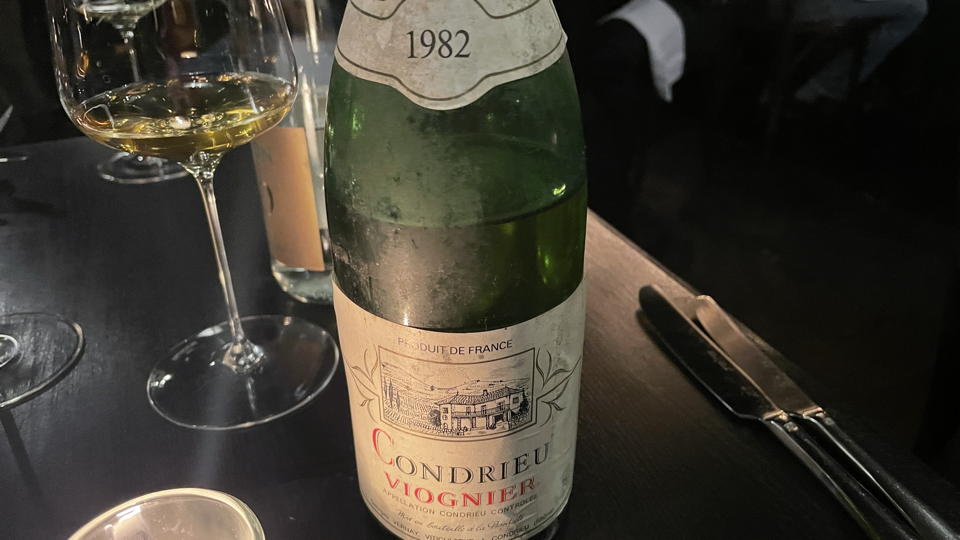 The 1982 Condrieu is clear and straw in colour. The nose changes a great deal over the course of an hour. Uncharacteristically muted for a Viognier at first, it then blossoms with wax resin, fennel, lemon thyme and subtle petrol aromas that renders it like a rich German Spätlese. That Germanic theme continues on the palate that has a conspicuous viscosity, implying that perhaps there was some botrytised fruit? Possible, as the wine purportedly lacked acidity on release according to John Livingstone-Learmonth. It has a lovely, quite sensual mouthfeel with notes of white peaches, apricot and just a light petrol note on the finish. It actually improves with aeration until you are smitten by its charms. The fact that after 40 years this Condrieu gives so much pleasure made me extremely happy. The fact that I had found it in a shop for just €20, even happier. 92/Drink 2022-2035.