This bottle of 1993 Nuits Saint-Georges Les Roncières 1er Cru was ‘magpied’ off a list in Beaune, one of the few bottles whose umbilical had not been cut within the last three years. I was tentative about suggesting it to friends over from the United States touring Burgundy because though I adore the vintage; it coincides with the notorious Guy Accad era. Accad’s controversial methods included extended maceration over several weeks and high doses of SO2, techniques that were subsequently traduced. At that time, companies returned their entire allocation of 1989s because of its questionable quality. Imagine that happening nowadays. 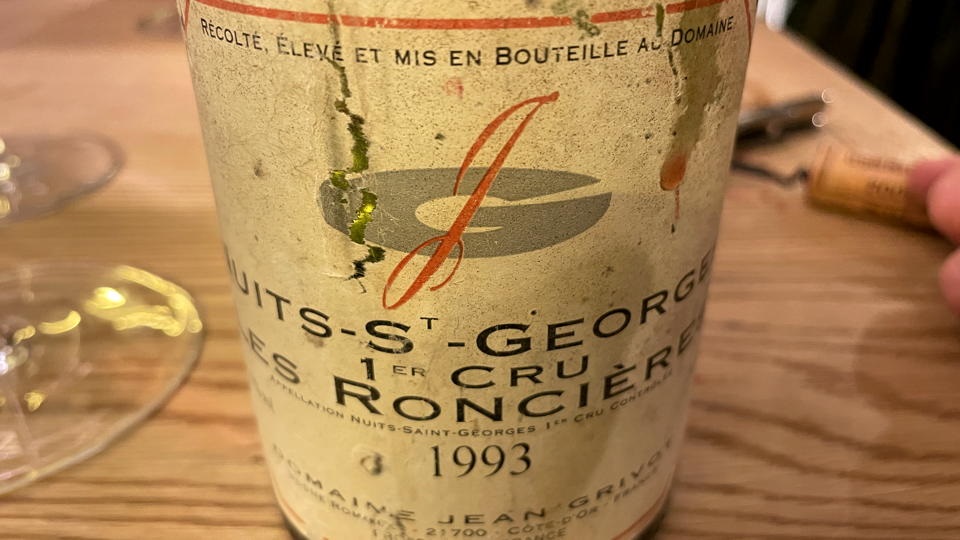 Our Nuits Saint-Georges was not decanted but poured directly from the bottle. Initially, it displays the traits of an Accad wine. It seems to lack flow. There is rigidity, as if an iron rod has been inserted to prevent pliancy. But here’s the thing. After 15-20 minutes, the Roncières begins loosening up. Fragrant blackberry and briary scents on the nose begin translating the transparency that is one of the signatures of this vintage. Nothing powerful, yet typical of a 1993 Côte de Nuits. Likewise, the palate softens and loses its inflexibility, the tannins become finer, almost lacelike, with disarming piquancy and ample freshness on the finish. Given it was listed for a price probably less than current vintages, the gamble had paid off. The lesson? Well, do approach this era from Grivot with caution, but afford any bottle time to breathe and don’t write it off – you could be pleasantly surprised. 91/Drink 2022-2032.