The best examples of Beaujolais can age effortlessly for decades. Beaujolais simply doesn’t get much better than those made by Morgon’s Jean Foillard, especially in a vintage as picture-perfect as 2005. Foillard assumed control of his family’s estate in 1980 and is among the region’s most esteemed vignerons. He farms his vines in the granite-rich Côte du Py climat of Morgon, perhaps the most highly regarded cru in all Beaujolais, with meticulous care. Foillard’s winemaking regimen is every bit as painstaking painstaking and dictates no chaptalization or filtering. In 2005 Foillard delivers big-time. 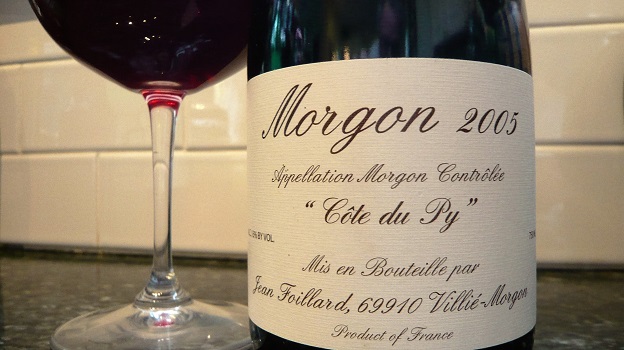 This bottle of the 2005 Morgon Côte du Py, pulled from a case that I bought on release in late 2006 or early 2007, displays a complex array of red and dark berry fruit, floral and spice qualities and an intense undercurrent of smoky minerality, which is typical of a great Morgon. It’s structured but giving, with the compelling interplay of power and finesse that defines a great wine. While it’s plenty delicious to drink by itself, a great Beaujolais like this one really shines with food. It doesn’t get much better than savoring a mature, or even almost mature (as is the case here) wine from Foillard alongside a classic like Coq au Vin (roasted chicken made with Beaujolais, of course) or simply a platter of charcuterie and mature cheeses. 93/Drinking window: 2015-2022.