It was at the 2010 Pinot Noir conference in Wellington where, in front of an ebullient, packed audience, I took the microphone and went off script. Presumably I was supposed to join in the rapturous reception for several New Zealand Pinot Noirs, selected and served blind as exemplars of their aging ability. In reality, these had merely survived, not evolved or flourished, and they certainly had not repaid anyone who cellared them. I was the party-pooper, the gadfly; I expected to be frog-marched out of the auditorium. Instead, my comments provoked a far more interesting and balanced discussion, since I was clearly not alone in my view. Before relinquishing the microphone, I did remark on wine number four, whatever that might have been. “Now that is a great example of mature Pinot Noir,” I announced. “That would rank alongside the greats of Burgundy.” Wine number four turned out to be from Felton Road. Quelle surprise.

Nine years later, on a balmy June evening, I was dining at a friend’s house when he suddenly popped inside to fetch a bottle given to him by a work colleague. I hoped it was nothing on discount at the supermarket. But obviously this colleague knew a thing or two about fermented grape juice, because it was the 2009 Cornish Point Pinot Noir from Felton Road. Result! 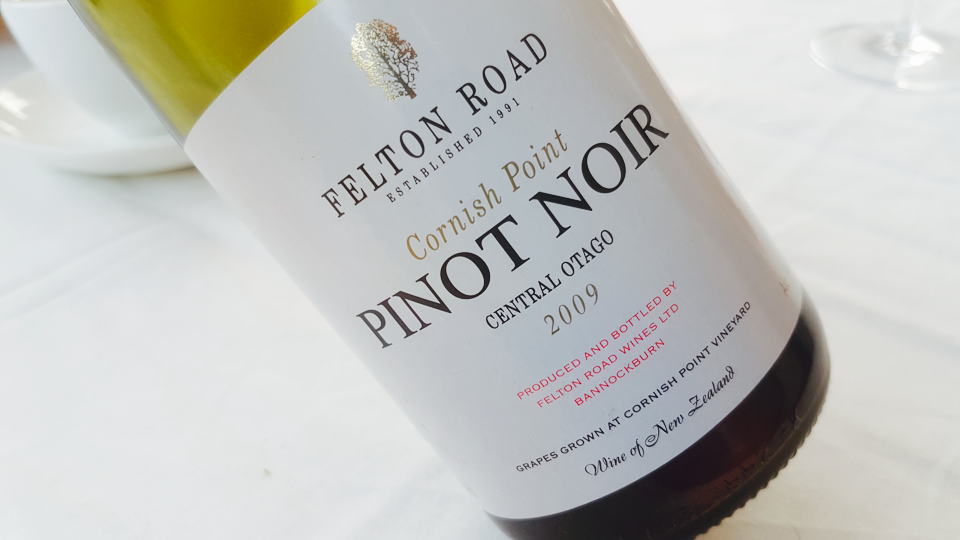 At 10 years of age, the 2009 shows only modest bricking. The wonderful bouquet is at that liminal point between primary and secondary aromas, offering scents of mulberry, hung game, wild fennel, sage and oregano. It evokes Provence more than Central Otago. The palate reminds me of a mature Chambolle-Musigny, meaty and bloody in character, generous and voluminous, with a sensual, slightly savory nuance. The 2009 is probably at its peak, although its freshness and substance suggest that well-cellared bottles will give another 10 years of drinking pleasure.

This bottle served as a reminder of how well Felton Road Pinot Noir can age, and it is not the only one. Back at that conference in 2010, I think they could have selected better examples. As New Zealand’s vines gain age and their roots deepen, I am sure we will see more and more mature Pinot Noirs from Central Otago, Martinborough, Nelson and so forth. But I don’t accept survivors. I want Pinot Noirs that evolve into something intellectual and complex, with both character and deliciousness – just like this Felton Road. 93/Drink 2019-2029.