Marcel Lapierre was a living legend in Beaujolais when he passed away at the age of sixty, in October 2010, just after harvest. Such was his renown that his obituary was published in the New York Times as well as in major newspapers across the globe. Lapierre will always be known for being the leader of a loose-knit group of Beaujolais producers who, in the early 1980s, bucked the industrial, hyper-commercial mentality that had settled in the region. Following the lead of négociant, wine scientist and writer Jules Chauvet, Lapierre began making his wines from organically farmed vineyards, with minimal intervention in the cellar, meaning no added chemicals and little to no sulfur, and then bottling without filtration. While this is common around the world now, such practices were nothing short of revolutionary at the time.

Today the Lapierre domaine is under the highly capable watch of Marcel’s widow, Marie, and his children, Camille and Mathieu. The wines are as good as ever. Two-thousand nine was the last vintage bottled in Marcel’s lifetime, and in most cases, it has turned out to be a magical vintage indeed. It was a hot growing season, so the fruit was ripe, but acidity and tannin levels were healthy as well. The best wines, like those from Lapierre, have the structure to age effortlessly. 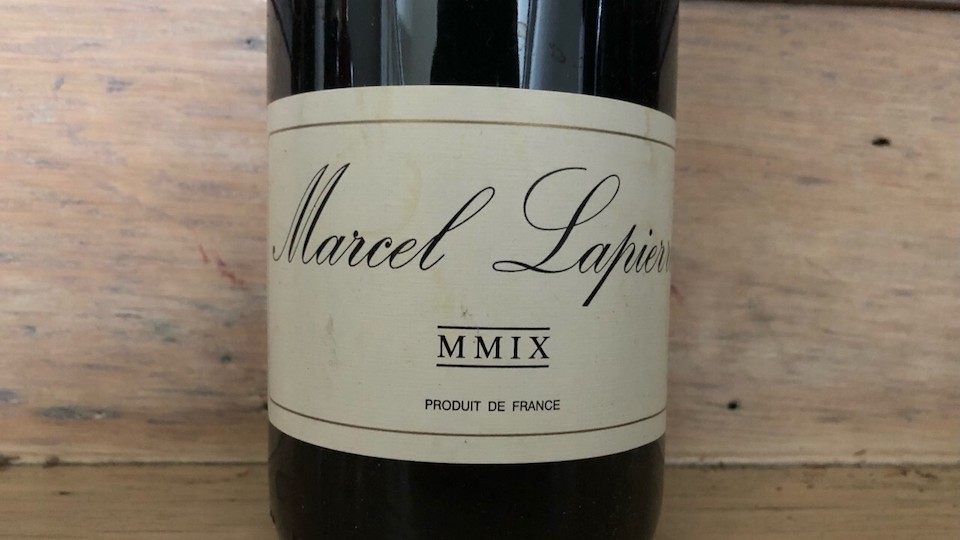 Two-thousand nine was the first vintage for Lapierre’s Cuvée Marcel, a bottling that has become one of the most sought-after wines in Beaujolais. Sourced from century-old (and older) vines, mostly in the famed Côte du Py lieu-dit, it is made with the intent to age; although, its abundant fruit often makes it highly enjoyable soon after release. While the 2009 is utterly gorgeous now, it has years of positive evolution ahead. Still deep in color, it offers up a highly complex bouquet of sappy red and blue fruits candied flowers, baking spices and a hint of botanical herbs. A thread of minerality runs through the wine, adding support and focus, not to mention a sense of freshness to intense, spice-laced black raspberry, cherry, blueberry and fruitcake flavors. Gently gripping tannins have folded smoothly into the fruit and add framework to a striking long, juicy, and sharply defined finish, making this a joy to drink now. So, enjoy it guild-free now, or hold onto it for another decade or so. When you pop it, give thanks to Marcel Lapierre and his family’s devotion to turning Beaujolais around. 95/Drink 2021-2030.