Whenever I visit Domaine de la Romanée-Conti, I often spy a half-a-dozen barrels stencilled “Les Petits Monts”. I have never asked about their fate or which producer they might be sold to, though I have a hunch. I presumed that Domaine de la Romanée-Conti would never bottle it themselves, if only to maintain their 100% Grand Cru portfolio. Perhaps their stance softened with the intermittent and successful release of their Cuvée Duvault-Blochet, either commercially released via agents or sometimes secreted out to restaurants. That is a policy that I applaud – supporting customers whilst avoiding rampant speculation on the secondary market.

Then, the 2018 vintage saw the inaugural release of the Vosne-Romanée Les Petits Monts. It comes from a 0.41-hectare parcel, not the only Premier Cru in the domaine’s possession as they own 0.11-hectares in Au-Dessus des Malconsorts and 0.08-hectares in Les Gaudichots. The Les Petits-Monts equates to six-barrels, or more precisely according to the label, 1,747 bottles in this vintage at least. One assumes that it undergoes exactly the same vineyard husbandry and élevage as their Grand Crus. Like many, I first spotted it on social media. It becomes a bit like hunting for Willy Wonka’s golden ticket. Bertrand de Villaine told me where I might find a bottle, though a wine writing colleague had the same idea and guzzled it himself, a treacherous act that shall never be forgiven. Later, dining in Saint-Émilion with Antonio, I spotted another on a list, but we were both in abstemious moods since we had a zillion primeur samples to taste at the crack of dawn. 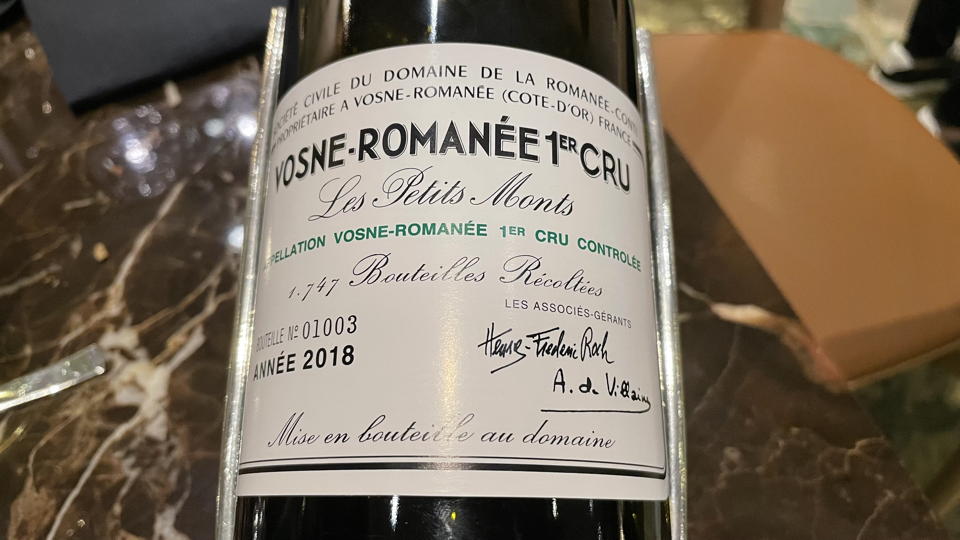 Then, in Vienne, preceding the Rousseau vertical, there was another bottle at La Pyramide at almost half the price in Bordeaux (it’s a good barometer of restaurant mark-ups!) Our group was split over two tables, and the other plucked it from the list, though a benevolent soul offered his glass. Before you go booking a table at the restaurant with the sole intention of ordering another bottle, please note that this was the last one. Infanticide? Guilty as charged. But it’s either that or never drinking it at all.

So, how did it taste?

The 2018 Vosne-Romanée Les Petits Monts 1er Cru expresses the growing season more than the terroir. Bulging with precocious Morello cherries and cassis on the nose, it can barely contain its youthful zeal and, for the Domaine, atypical decadence. The palate follows in a similar vein with saturated tannins, velvety red fruit, plump and sensuality. The purity is utterly seductive, but does not exude mineralité and terroir expression. Thoroughly enjoyable, yet it is not intellectual. But it does heighten intrigue, and I would love to taste the same cuvée in a cooler vintage since, to the best of my knowledge, we will see a few bottles released in the future. Good luck treasure hunting. 91/Drink 2022-2036.