Whilst up to my neck in Bordeaux primeur samples, one sunny evening during a brief return home for Easter, I took a break from Cabernet and cracked open a South African wine that had been sent to my home, the 2018 Taaibosch Crescendo. It was a timely reminder that there are plenty of alternatives to Bordeaux if primeur prices are unfavourable. A bit of background. In the afterglow of post-Apartheid, the Cordoba Crescendo became one of the Cape’s premier wines after debuting with the 1995 vintage. It came from the Helderberg Ward of Stellenbosch, a sought-after site advantaged by altitude (250m to 380m) and proximity to False Bay, sea breezes manifesting a cooler micro-climate. The wine was made by Christ Keet. Unfortunately, the owners’ interest waned and Keet departed. The last vintage was 2003 whereafter the fruit began to be sold off for the profit of other producers. 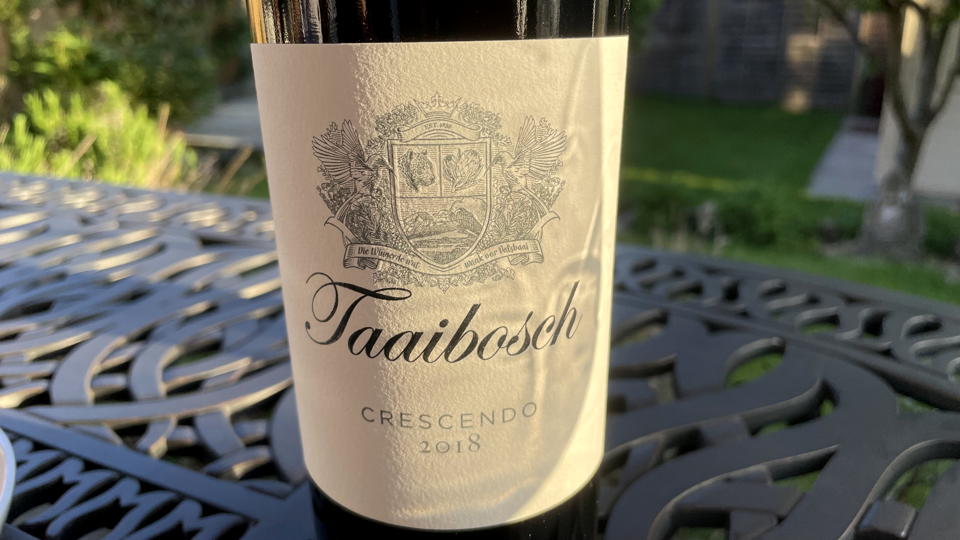 Fast-forward a few years to 2017, and new owners, the Oddo family, proprietors of vineyards in Sancerre and Sicily, bought the estate and renamed it after a species of indigenous fynbos: Taaibosch. The vines are now 21-years-old and organically farmed on Table Mountain sandstone soil over granite. Schalk-Willam Joubet, winemaker of “Rupert & Rothschild” was appointed to oversee the resurrected wine, and the maiden 2018 was released earlier this year. It is a blend of 60% Cabernet Franc, 24% Merlot and 16% Cabernet Sauvignon, matured in a combination of 225-litre oak barrels (one-third new) plus 9,000-liter foudres and cement vats for 36 months. The nose expresses the Cabernet Franc with style, predominantly black fruit, intermingling with lavender, leather and crushed violets emanating from the Cabernet. The palate is very well balanced with quite a plush texture and a finish inspired by the Right Bank, though it is unmistakably from the Cape. It was difficult to resist another sip, an exemplar for the new-style of more restrained, terroir-driven Stellenbosch wines. Think what Figeac might taste like if it suddenly woke up and found itself in Stellenbosch. Be quick to grab the 2018 as it is sold out in many places, though the 2019 will be released imminently. 93/Drink 2024-2040.