In this week's Cellar Favorite column, we offer two completely separate and independent views on the 2021 releases from Château Latour.

The 2016 Pauillac de Château Latour is a compelling, sumptuous wine that shows just how magnificent the year is. How can this be a third wine? Dark and ample in the glass, Latour's Pauillac possesses tremendous breed right out of the gate. Black cherry, graphite, licorice, spice and leather all meld together in the glass. Floral overtones develop nicely with time. Only the (relatively) lighter structure suggests the Pauillac's place in the château's hierarchy. Everything else is first class all the way. The Pauillac is a blend taken from parcels outside the core holdings in the famed enclos, plus younger vines in the enclos. 92/Drink 2022-2036 (AG).

The 2015 Les Forts de Latour is silky, perfumed and wonderfully nuanced from the very first taste. Crushed red berry, cedar, tobacco, mint and blood orange lend striking aromatic nuance. Ample and resonant in feel, yet with mid-weight structure, the 2015 is a total pleasure to taste today. All of the natural radiance of the warm year comes through in the wine's generous, inviting personality. Drink it over the next 15 years or so. 94/Drink 2021-2030 (AG).

The 2013 Latour is absolutely gorgeous. Of course, the 2013 is lighter in body than the norm here, but striking aromatics and silky tannins more than make up for that. A wine of total breed and class, the 2013 is a real pleasure to taste today. Naturally, the lighter structure of the year is impossible to escape. Even so, at eight years of age, the 2013 is just starting to show the first signs of aromatic nuance, and yet it remains a young wine. The spread of botrytis led to an early harvest, with the exception to some blocks on the western side of the enclos that were more resistant to conditions and were therefore picked later. This is a remarkable showing considering a little more than 2/3rds of the vineyards (for the Grand Vin) were farmed biodynamically back then. I can't wait to see how the 2013 ages. My opened bottle stayed fresh for a number of days. 92/Drink 2021-2033 (AG). 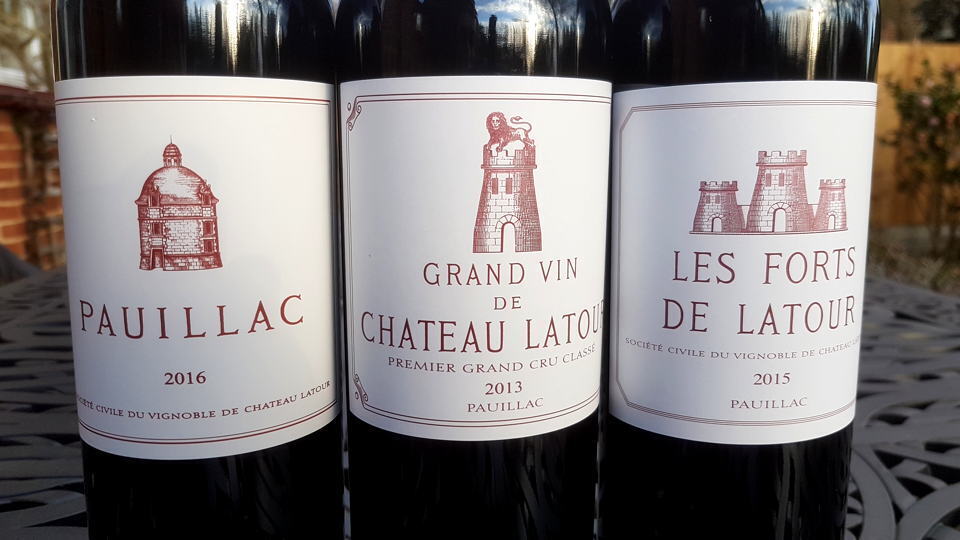 The 2016 Pauillac de Latour, which comes from parcels known as ‘Saint Anne’ in the southwest sector of the appellation augmented by young vines from Enclos, was picked from 22 September to 19 October. As befitting a ripe vintage such as this, it has an intense and outgoing bouquet with a surfeit of fruit: blackberry commingling with bilberry. Blueberry scents manifest with aeration and becomes increasingly prominent. The palate is plush and generous. Lithe and rounded in texture, it is balanced and pure, ladling out a mixture of black and blue fruit like there’s no tomorrow. It is not sophisticated - that is not the raison d’être of this Troisième Vin. To put it prosaically, this is just a delicious Pauillac that is drinking perfectly now and will continue to do so for another 6 to 8 years. 89/Drink 2021-2030 (NM).

The 2015 Les Forts de Latour was picked from 15 September to 10 October, commencing with the Merlot and finishing with the Cabernet Sauvignon. This bottle correlates closely to the one that I tasted blind in January 2019. There is a mixture of blackberry, graphite and cedar on the nose, very well defined and focused. The palate is medium-bodied with very fine tannins, a mixture of red and black fruit with superb mineralité and lip-smacking salinity. Velvety in texture, this is wonderfully poised with great persistence on the finish. Excellent. 93/Drink 2021-2038 (NM).

The 2013 Latour comes from an infamously growing season that saw 30% more rain than the 25-year average and outbreaks of botrytis from 20 September, just seven days prior to the picking that was completed on 11 October. Deep purple in color, initially it has a relatively light bouquet compared to other vintages, scents of blackberry, raspberry preserve and pencil shavings plus hints of gravel. There are certainly no vegetal or green aromas. It has commendable purity, though it does not possess the complexity of profundity of a bona fide great Latour. Monitoring over time, it coheres and gains delineation, peaking about two or three hours after opening, so do not be averse to a short decant. The palate is medium-bodied with graphite-tinged black fruit, just a touch of cracked black pepper and noticeable salinity on the finish. Whilst it does not have Latour’s signature backbone or gravitas, it is approachable, harmonious and winsome. Frankly, it’s about as good as the Left Bank gets in this vintage. 91/Drink 2022-2032 (NM).