Checking in on the Lafon 2010s

Usually we feature older wines in Cellar Favorites, but given the understandable trepidation consumers have around cellaring white Burgundy, I thought it would be interesting to see how a handful of highly touted white Burgundies are faring. To be honest, I had a selfish reason for wanting to taste these wines. I bought many of the Lafon 2010s (it is my daughter’s birth year), but I did so not really knowing when the wines would be ready to drink or how long they will last. I think I can at least offer a view on the first part of that question, but the second, happily, remains a question mark, in the best sense of the term.

Vinous readers will recall that 2010 is unusual in the Côte de Beaune for its combination of both elevated ripeness and high acidity, two attributes one rarely finds in the same vintage. At Lafon, the 2010s were positively electric when I tasted them from barrel and then from bottle. Today, a few years later, the 2010 whites are every bit as impressive.  Although projecting drinking windows for white Burgundy these days is fraught with peril, based on this showing all of the 2010s need at least a few more years in bottle with the possible exception of the Goutte d’Or. 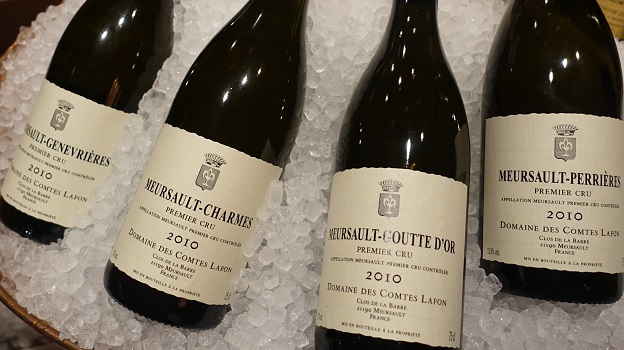 Energetic, precise and nuanced to the core, Lafon’s 2010 Meursault Goutte d’Or offers terrific energy to match its chiseled personality. The Goutte d’Or is the most weightless and lifted of these four wines, but it nevertheless possesses gorgeous energy and fabulous overall balance. This is an impressive showing from the 2010. The 2010 Meursault Charmes is everything Charmes is supposed to be. Soft, enveloping and generous, but with plenty of vintage 2010 energy, the Charmes marries soft contours with layers of saline-infused precision. The 2010 is pretty hard to resist today because its balance is so impeccable, but it should develop even more complexity over time. The 2010 Meursault Perrières takes things to another level. I can still remember tasting the 2010 from barrel, and how vivid it was back then. Today, it is every bit as remarkable. A host of slate, smoke, lemon peel and white flower nuances dazzles the senses. Explosive and positively salivating from the very first taste, the 2010 is simply exquisite. What a wine! 96. While the preceding Meursaults all offer a measure of exuberance – albeit in a classically austere style – the 2010 Meursault Genevrières is a much more introverted wine that draws the taster in with its myriad shades of dimension. Deceptively medium in body, the 2010 is all about intensity, cut and inward energy, with the classic reductive flavor profile that is typical of this great site, and breathtaking harmony. The 2010 refreshes the palate with every taste as it continues to grow in the glass. Over the last few years, the 2010 has blossomed into a spectacular Meursault. This is the best showing yet from the Genevrières.