The 1971 Barolo from Cantina Mascarello is a relic from a time when Piedmont was a very different place than it is today, in many more ways than one. For starters, before the 1980s, reaching full maturity with Nebbiolo was a challenge, so riper vintages like 1971 were welcome. Warmer sites, where grapes reached maturity earlier, were favored, as cooler sites were more susceptible to the fall rains. Barolo was a wine whose popularity was limited only to a relatively small number of passionate consumers and collectors.

Things are totally different today. Climate change has brought with it warmer, drier growing seasons. Rain during fall is rarely an issue. Growers worry about vintages that are excessively hot and dry, and not the opposite, as their parents and grandparents did. Today’s growing conditions have resulted in a reassessment of what the best sites are and will be for Nebbiolo. And of course, Barolo is one of the most highly sought wines in the world. A wine-lover visiting Cantina Mascarello in the 1970s and 1980s could have bought pretty much all the wine they wanted. Now….well, things are completely different, let’s just leave it at that. 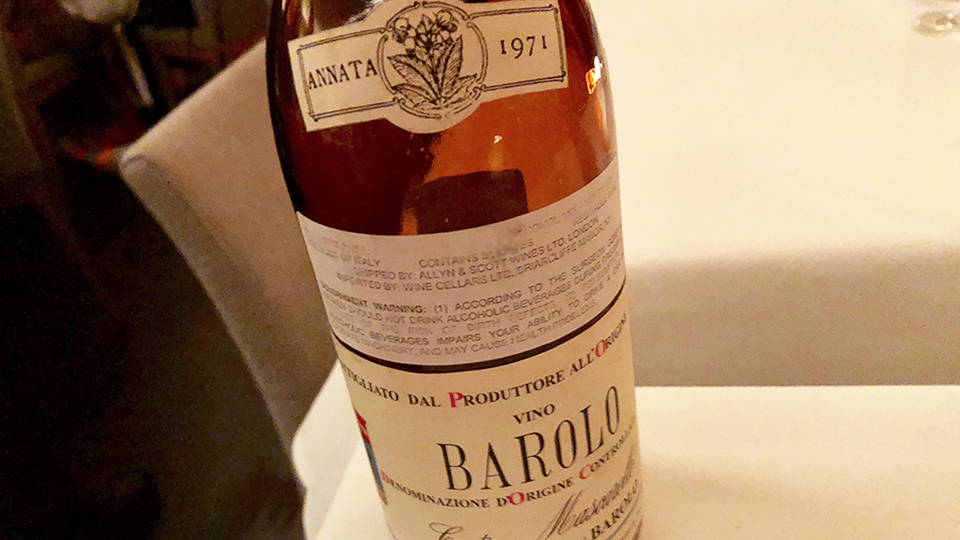 The 1971 Barolo is a real thrill to taste and drink. Let me emphasize that second point. So often, wines like this are tasted among many other wines. On this night the two of us savor every last drop of the 1971. I have had very mixed results with the 1971, to the point I stopped seeking it out. In the 1970s (and later) Barolo was bottled only when it was sold, so it is very likely, if not probable, that the 1971 was bottled botte by botte over a period of years, which naturally leads to a certain amount of bottle variation. On this night, the 1971 is positively stellar. Deep, complex and potent, the 1971 captures all the richness of the year in its multi-faceted personality. More importantly, this bottle does not have any of the barnyard aromas and flavors that are unfortunately common in the Mascarello 1971. Simply put, this is what Barolo from the 1970s is all about. Readers who own pristine bottles can look forward to another two decades of exceptional drinking if storage is perfect. 96/Drink 2018-2038.