Our Cellar Favorite column is meant to bring readers’ attention towards either mature bottles currently drinking well or recent vintages worthy of laying down. This entry fits neither of those criteria. The reason that I cleaved it away from an eclectic tranche of mature Burgundy notes is because of its rarity and uniqueness, to the extent that I previously received two or three enquiries asking whether this cuvée existed. So this Cellar Favorite answers that question: Yes, Christophe Roumier did make a one-off Les Beaumonts in 1985. It is not a figment of your imagination. It is not a fake.

Before broaching the wine, consider its context. Roumier was a young winemaker who took over from his father in 1983, so I suspect that despite his domaine boasting some of the choicest vineyards in the Côte de Nuits, he could not resist branching out and deploying his skill in another appellation. That does not imply that the resulting wine will be a success. I am not someone who is going to rhapsodize about a wine just because it is from a famous grower, a renowned growing season and what is an extremely rare wine limited to a single barrel. That is the second motive for this particular Cellar Favorite: to give an objective opinion. And the truth is this... Alas Christophe Roumier did not make a great Les Beaumonts. I do not know the exact reason why, though being limited to a single barrel means that the winemaker has no option but to bottle whatever that barrel gives him, good or otherwise. Perhaps that was one reason that it took him until 2016 to re-enter Vosne-Romanée with his métayage in Echézeaux! 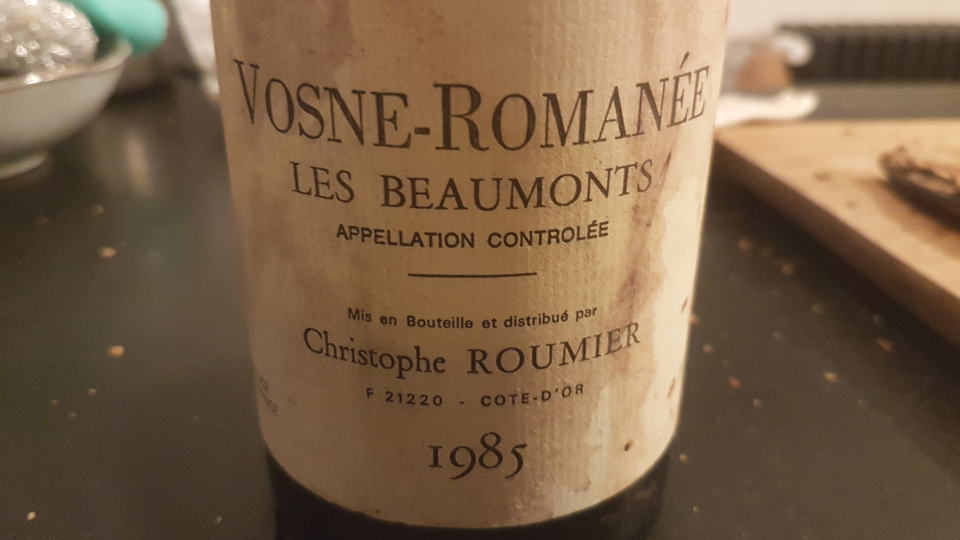 The 1985 Vosne-Romanée Les Beaumonts 1er Cru shows moderate bricking on the rim, commensurate with other 1985’s from the appellation. The nose is quite pungent, with earthenware dominating over the remnants of red fruit. Over time a potent capsicum scent takes charge, intimating that maybe the fruit was not fully ripe. The palate is rather leafy verging on vegetal, which is perplexing in a 1985, rustic and ferrous, tapering towards a slightly bitter finish that is fraying at the seams. No, this is not a great Les Beaumonts and pales against the astounding Les Amoureuses, Bonnes-Mares and Musigny that Roumier produced in that same growing season. If you find any bottles of this rara avis then you can either enjoy possessing one of the most enigmatic wines of the Eighties or drink it soon. 86/Drink 2020-2023.