The 1999 Dunn Cabernet Sauvignon has earned a highly respected place in the cellars of collectors in the know, and we’re not talking about the more popular Howell Mountain bottling. Instead, the Napa Valley mixes estate fruit from Howell Mountain with purchased fruit from the Valley floor to create a more immediate wine - yet there couldn’t have been anything immediate about the 1999 in its youth.

My introduction to this magical old-school-styled California Cabernet was many years ago at a blind tasting with friends. The theme of that tasting was simple: bring one of your best bottles. This wasn’t supposed to be about name recognition or label shock, but instead about sharing a wine that you love with others who can appreciate it - but also with the blind aspect thrown in to add a bit of fun and guesswork to the mix.

The wines on the table ranged from the best from Bordeaux, Spain, Italy and the United States. However, when the 1999 Dunn was passed around, everyone became very quiet. It was obvious that we all had something very special in our glass. Knowing the attendees of this tasting, the sky was the limit. It was clear to us all that this was mature Cabernet, but from where? Only one person at this table knew that this wine was in the mix, and no hints were offered up. The thought that this might be California wasn’t even mentioned; instead, it became a game of trying to figure out which vintage and producer of Left Bank Bordeaux had produced this stunning wine that we were all experiencing. Great names of the region began to fly around the table, often asserted by collectors who know their Bordeaux quite well. In the end, when the 1999 Dunn Cabernet was revealed, we sat back in awe. 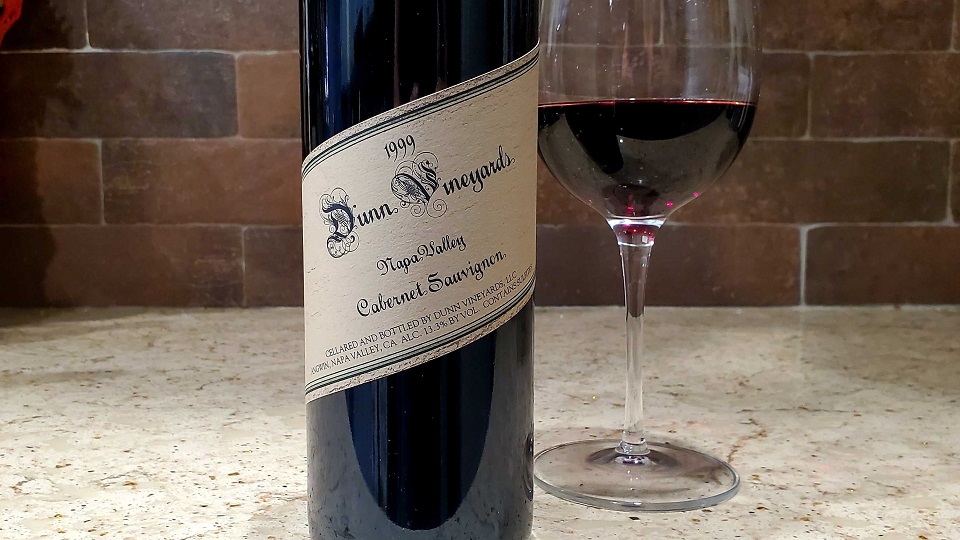 As you can imagine, this prompted us all to be on the lookout for the 1999 Dunn Cabernet Sauvignon (Napa Valley). Since then, it’s a bottle I always reserved for the best of friends and those who can appreciate it most.

The 1999 Dunn Cabernet Sauvignon (Napa Valley) is gorgeous, with a display of sweet tobacco, green stems and sage which give way to musky red and black currants. It gains in depth and complexity with time in the glass, taking on hints of dried flowers, clove and graphite. The textures are velvety; yet the feel is quite lifted, with brisk acids creating a mouthwatering feel while ushering in tart raspberry and hints of bitter herbs. The tannins are nearly resolved but not quite, as the 1999 Dunn finishes elegant and long, tapering off to savory spice and lasting mineral tones. It’s amazing how youthful and fresh this is with twenty-one years under its belt. The best part is that there are many more years of positive evolution in store. 94/Drink 2020-2030.