I rue the fact that I have not or rather cannot keep up with German Riesling. Anyone who doesn’t like German Riesling either doesn’t like wine or is no longer alive. Back in the day, I made at least one trip to Germany each year, including several consecutive years attending the VDP auctions in Trier, an unusual and possibly unique case of German inefficiency, where growers’ top selected wines pass through a byzantine ritual too long to explain here. Let’s just say you need a lot of stamina to remain awake throughout the entire auction, and I usually lost the will to live after four or five hours. Sadly, a lack of time precludes me from attending the auction these days or clambering up vertigo-inducing slate slopes praying that I don’t lose my step, or drinking nearly as much German wine as I would like. 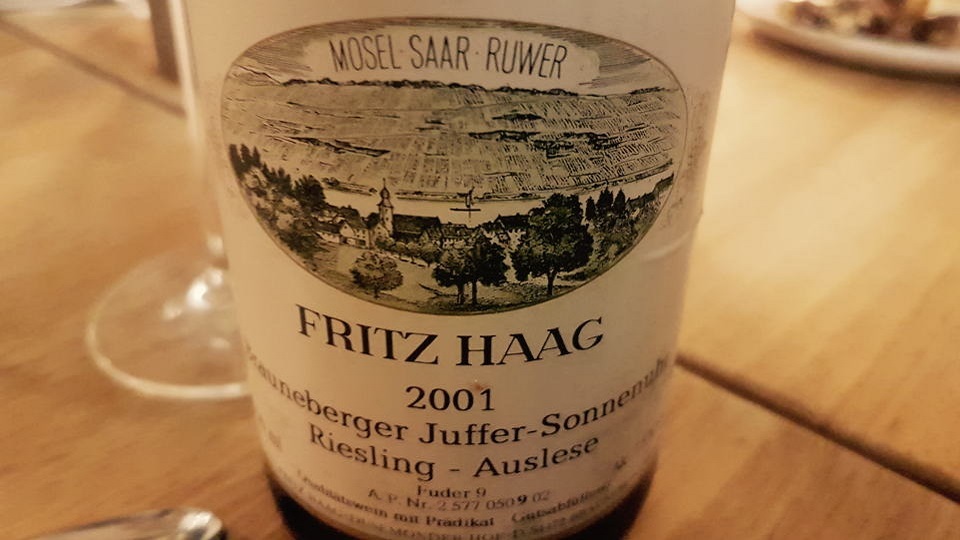 Earlier this year I was reminded of the joys I’m missing out on courtesy of a couple of wonderful Rieslings. One of them appeared at Hatched restaurant in Clapham, London, which I sincerely hope will reopen after lockdown. The 2001 Brauneberger Juffer-Sonnenuhr Riesling Auslese #9 from Fritz Haag is a brilliant wine that is only just beginning to show what it is capable of. Limpid in hue, it has a nose that leaps out of the glass with scents of freshly sliced pear, kiwi fruit, struck flint and just a subtle tinned apricot aroma that remains politely in the background. The palate is brimming with tension that neatly counterbalances the power behind this Auslese. In fact, the razor-sharp acidity is such that blind, I would guess this to be more Spätlese. It is a nimble Auslese that dances on tiptoes, the finish clearly holding plenty of coiled-up energy that ensures it will give another 15–20 years of drinking pleasure. This is Riesling/Fritz Haag in full flight. 95/Drink 2020-2040.