One question that I am often asked is whether Riesling is better dry or sweet? The answer is seldom black or white. This is not to say that it is about shades of grey, but rather that Riesling is one of the few varieties that excels in more than one discipline. What, then, is the nature of an individual vineyard? Are there some sites that consistently produce only one style of wine well? Or can a grape, like Riesling, be good at more than one thing?

That is the question that Wilhelm Weil from the Robert Weil estate in Kiedrich wanted to answer. His Gräfenberg vineyard high in the hills above the Rhine in the Rheingau is classified at a Grosses Gewächs - or Grand Cru. For many collectors, he is one of Germany’s star producers of noble late harvest Rieslings, with his Spätleses, Ausleses und Trockenbeerenauleses regularly being some of the finest wines of any given vintage; but the estate also has a long history of bottling excellent dry Rieslings. Is one better than the other?

On March 11, I sat down with Weil and a few other tasters to survey 38 wines, dating from 2013 back to 1921. They were organized in two flights, one with dry Rieslings that the estate long labeled as their Cabinet and another of Spätleses. 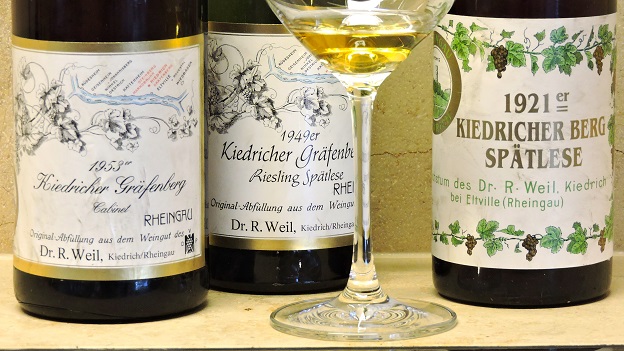 With less than ten grams of residual sugar, 1953 Kiedricher Gräfenberg Riesling Cabinet would be labeled today as a dry Grosses Gewächs. Back then a Cabinett was often the finest cask of a given vintage that was bottled separately and held back for privileged guests on special occasions. It was a breathtaking experience to drink a sixty one year old dry Riesling that was still so young and fresh. A touch of brioche on the nose was the only indication of the wine’s age. 95.

The 1949 Kiedricher Gräfenberg Riesling Spätlese brought goose pimples to my hands. It was electrifying and so mesmerizing that for a moment I could hardly think. At first, I did not want to write, much less put down a score, but knew immediately that I was in the presence of an elder statesman. Perhaps genius would be a better word. 96.