Proprietors Anthony and Olive Hamilton Russell recently tutored a special tasting of Hamilton Russell Vineyards’ flagship Pinot Noir to mark 40-years of vintages. Tim Hamilton Russell purchased the uncultivated 170-hectare land in Hemel-en-Aarde back in 1975 for the equivalent sum of £3,000 (about $4,000). “Serendipitously, my father planted 52-hectares of vines in 1976 on the right kind of heavy clayey soil from a Swiss clone (BK65) that had been smuggled into the country,” Anthony Hamilton Russell explained. “The 1981 Pinot Noir was our first release, and we made an experimental Chardonnay the following year. My father lived in Johannesburg. He never made money from the estate until I bought it from him in 1994. We had around eight labels, but I decided to focus on Pinot Noir and Chardonnay from the best parts of our vineyard. All our Pinot Noir has been made from our own vines since 1992. By the mid-nineties, the vines were heavily virused, and so I began to replant using Dijon clones: 115, 113, 667 and 777. The vineyard had been totally replanted by 1997. We were four-years ahead in that respect – essentially a testing ground for Dijon clones in the Cape. These have since become a little virused, though now we replace them individually instead of uprooting an entire parcel. We have farmed organically since 2014. I sent our vineyard manager to Canada to learn, instead of California where it is too dry.” 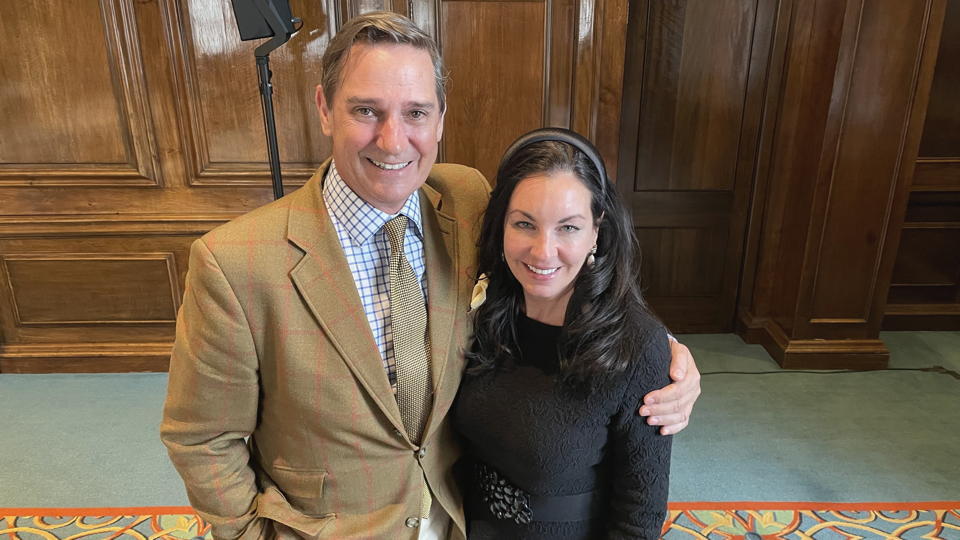 Anthony Hamilton Russell is a disarmingly candid winemaker, and this is reflected in his wines that always wear their hearts on their sleeves. “We made all-kinds of mistakes in the 1980s,” he admits freely. “We did the ‘where to’ right [in terms of where we had planted the vines], but the ‘how to’ [in terms of winemaking] was wrong. However, the aesthetic still came through. We never work against our terroir, and winemakers have never been allowed to impose their ego onto the wines. It is about purity. There is nothing dramatic in our wine.” One principle and noble tenet is that a bottle of Hamilton Russell articulates the entire vineyard, and to this end, a parcel’s wine is only rejected if it is faulty. “That’s why there are no special bottlings,” Hamilton Russell continued. “In 2019, we rejected 84% of the wine because of smoke taint.”

This vertical included seven vintages of Pinot Noir from first to last release. The tasting notes speak for themselves. Suffice to say that the historic 1981 has matured amazingly well. With regards to other vintages, in a sense they reflect a wine that is like a teenager growing up. It is a wine that has learned from its own mistakes. Despite being constant in terms of its Burgundian style, it does not disguise past errors of judgement. 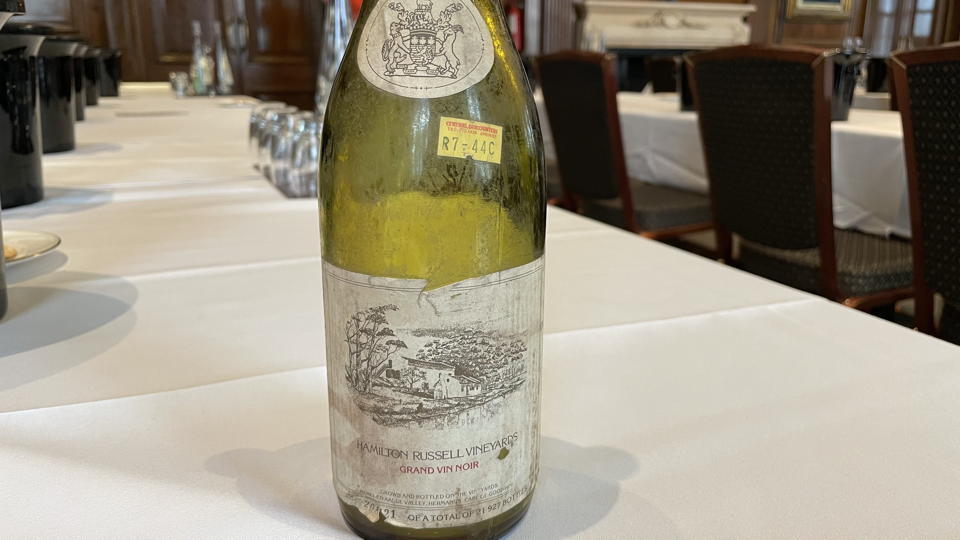 The historic and now even rarer 1981 Pinot Noir replete with original price sticker.

The historic 1981 Pinot Noir is the maiden vintage. Only four bottles remain at the winery, and one of the bottles poured still had the original price tag on the bottle! Mature in colour with russet rim, the bouquet is gentle and well-defined with vestiges of red fruit, touches of iron rust and a hint of bell pepper. This is very Burgundian, top Burgundian too. The palate is medium-bodied with a spicy entry, a dash of white pepper, fine depth with just a touch of viscosity. This has unquestionably lasted well and is thoroughly enjoyable, with a satisfying long tail on the finish. More than a curiosity, this is wonderful and against expectations, it evolves beautifully in the glass into a mature Gevrey-Chambertin.  94/Drink 2022-2032. The 1983 Pinot Noir has a slightly smudged nose, more advanced than the 1981, earthy with an attractive menthol note coming through, though it rapidly madeirizes in the glass. The palate is fully mature, slightly caramelised, sweet with an almost Madeira-like personality. This needs to be drunk soon. 80?/Drink 2022-2022.

The 1997 Pinot Noir has a well-defined nose with Bing cherry, light chlorine scents and fine lift, although not as complex as the 1981. The palate is better with grainy tannins, fully mature with black pepper and clove. This is a little austere, yet balanced with touches of tobacco on the finish. This feels a little static compared to other vintages, rather ‘hemmed in’ and lacking a sense of natural flow. 86/Drink 2022-2025. The 2001 Pinot Noir comes from an era when, as Anthony Hamilton Russell remarks, South Africa was pursuing more consumer-friendly, bigger wines. This is one of the few vintages that came in over 14% alcohol, which Hamilton Russell rues as a mistake in hindsight. The impact of the wood comes through, with more cedar, beef-stock and tobacco aromas complementing the red fruit. The palate is medium-bodied with a slightly honeyed texture. Good substance, denser than other vintages, though it loses just a bit of Pinot DNA on the finish. Drinking perfectly now but it should drink for another decade. 89/Drink 2022-2028. 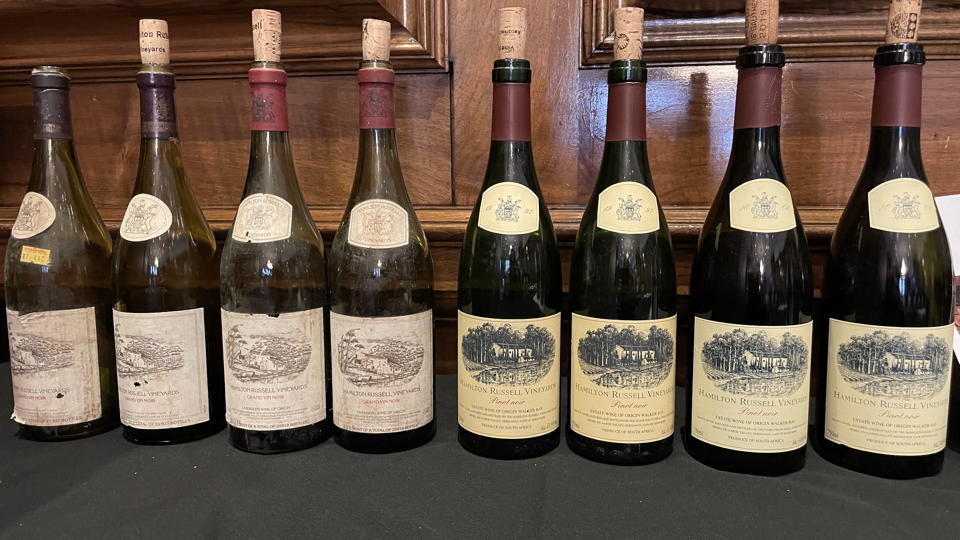 The 2009 Pinot Noir has a slight reduction on the nose that needs aeration to blow off. Cranberry and raspberry fruit, thyme with very light fennel aromas, it just requires a little more precision. The palate is medium-bodied with sappy red fruit, more saline than the 2001, gentle grip with fine structure. Better oak integrated than the 2001, just requiring more precision on the finish that has a slight coarseness. Very enjoyable to drink at the moment, though I find other vintages to be superior. 90/Drink 2022-2032. The 2018 Pinot Noir has a lovely bouquet with pure red cherry and crushed strawberry scents, rose petal and light bergamot scents. The oak here is very nicely integrated. The palate is medium-bodied, with sappy red fruit, quite saline, lightly spiced and fairly linear with a touch more definition on the finish compared to when I last tasted it. Drink now and over the next decade. 91/Drink 2022-2035.

The 2021 Pinot Noir, cropped at around 16hL/ha, has a pastille-like purity: strawberry and red cherries, touches of fresh fig and dates in the background lending a welcome soupçon of exoticism, though it retains Burgundian allure. The aromatics coalesce nicely in the glass. The palate is well balanced with sappy red fruit, just a little chewiness nicely integrates oak with a slightly candied finish, where readers might look for a little more substance. This deserves two or three years in bottle. The components are here, just add time. 91/Drink 2022-2040.