Complete Masseto Retrospective at the Country Music Hall of Fame

Well, I have to hand it to the Nashville Wine Auction and President/CEO Holly Whaley. They really knew how to get me to say ‘yes’ to participating in a Masseto tasting in Nashville. Wine, guitars and country music, all for cancer research and treatment. That will get me every time. I was thrilled to co-host this complete Masseto retrospective with winemaker Axel Heinz, singer/songwriter Martina McBride and her husband, producer John McBride. It was a phenomenal weekend. 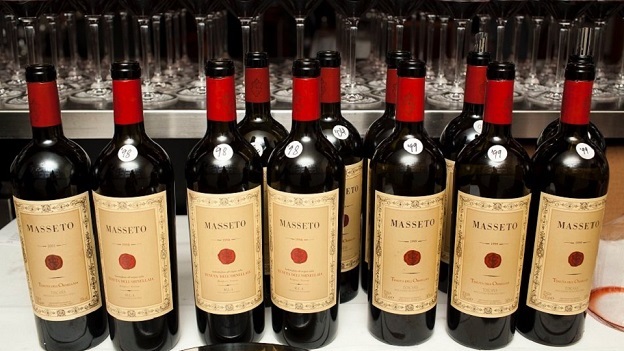 Our first day kicked off with a tour of the Gibson Custom Shop, which was a real thrill for many reasons. I bought my first Gibson, a cherry red ES-335, in high school, using pretty much all the savings I had at the time. The Nashville Custom Shop, one of two such facilities Gibson operates, focuses on solid body guitars and archtops. It’s a no frills visit, as the Custom Shop is not really set up for tours. Instead, Product Specialist Mat Koehler took us through some of the main workstations, where we met a number of craftspeople, many of whom had worked at Gibson for decades, and had a chance to see Gibson’s rich history on display first-hand, including a lot of very well worn-in machine tools. 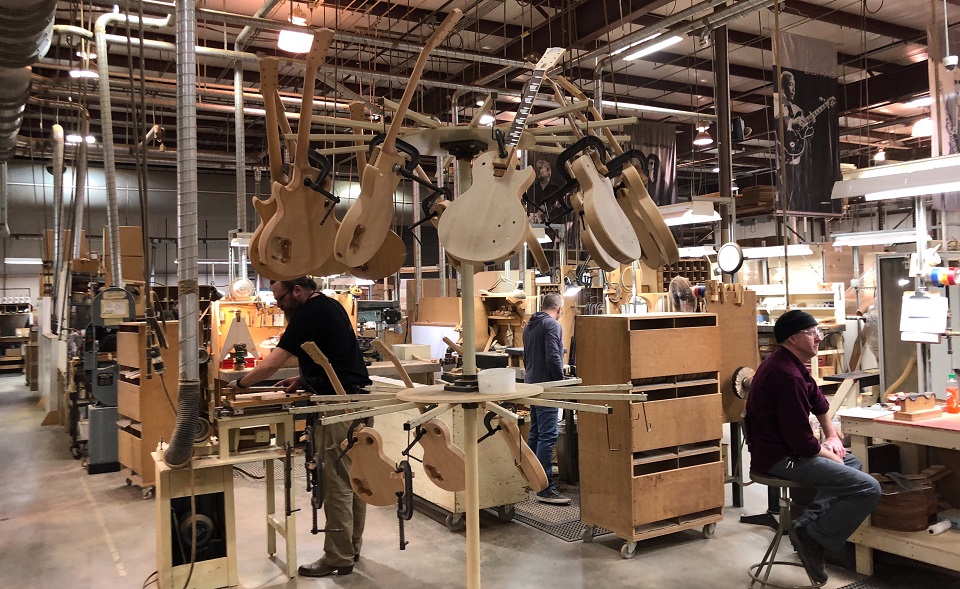 Necks are glued to bodies and air-dried at this station at the Gibson Custom Shop in Nashville.

I was also able to play several instruments right on the floor. Quite honestly, I could have spent the entire day at the shop, but our hosts had a jam-packed day planned for us. Our tour ended in a showroom with a number of instruments on display. “Hold on a sec, I’ve got something for you to try,” Koehler said. A few minutes later, he returned with two SGs. “These just came off the floor,” he added. Heinz, a super-talented guitarist himself, and I took turns checking them out. The first was gorgeous. The second, though, a 1961 Les Paul/SG re-issue, was pure magic. As soon as I picked it up, I knew I had to have it. Light, fast and loud, with superb intonation, this particular SG had everything I look for in an electric guitar, most notably volume and resonance when played unplugged. It sounded and felt great. When it was first released, the 1961 was a controversial guitar. Believe it or not, the SG was first developed as the ‘new’ model of the Les Paul, which was experiencing sagging sales. Today, late 1950s Les Pauls are one of the Holy Grails of electric guitars, but that was not at all the case back then. So, Gibson created the SG/Les Paul, with its thin body and sharp double cutaways, to spice things up. Namesake Les Paul himself hated the new design and insisted his name be taken off. It turns out both Les Paul and Gibson were right. The Les Paul guitar became an icon, while the SG went on to become Gibson’s all-time best-selling model. Anyway, that history was fascinating to think about as Koehler showed us the original pencil-drawn sketches for the 1961 Les Paul/SG. I was not allowed to take photos, but seeing those drawings was such a great experience.

From there, we had a good, old-fashioned Southern lunch before heading over to Carter Vintage Guitars, one of the country’s top dealers of rare and vintage instruments. Here, too, we were so spoiled, as we had the run of the shop. Old Fenders…I played a bunch of Esquires and Telecasters in a room full of them. Then it was a number of Gretsches before I spent some time with a gorgeous Gibson doubleneck. What an incredible shop. I can’t wait to go back. 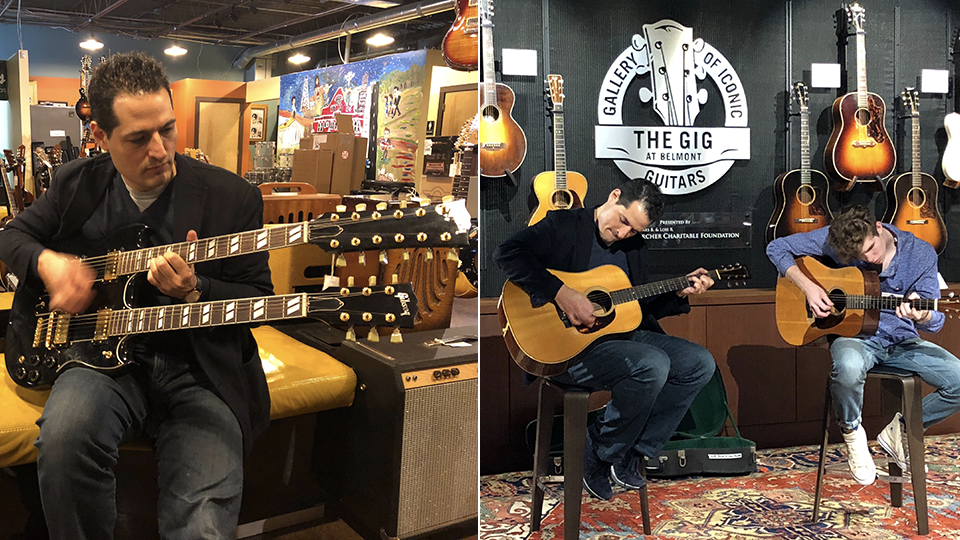 Playing a Gibson doubleneck at Carter Vintage Guitars and a super-rare 1940s Martin at Belmont University.

Our next stop was the Gallery of Iconic Guitars at Belmont University. This remarkable museum was founded with a gift of 500 guitars bequeathed by Steven Kern Shaw, the grandson of Jerome Kern, one of America’s most famous composers of musical theater. It houses a breathtaking array of instruments, including several guitars and mandolins autographed by Lloyd Loar, who designed Gibson’s iconic L-5 guitar and L-5 mandolin. But the Gallery of Iconic Guitars is much more than a museum, it is more of a living collection. Shaw very much wanted these instruments to be used rather than sit in storage, and so the guitars are available for students of the university to check out, sort of like library books, although I imagine there is a bit more to it than that. Axel Heinz and I had the chance to play a few super-rare Martin flattops from the 1940s and 1950s with several students. It was a great way to wrap up the afternoon.

Blackbird Studio is one of the preeminent recording and sound mixing facilities in the world. It was a real treat to enjoy a casual dinner and some fabulous wines with some of the Auction’s biggest supporters. That was the prelude to a tour of the studio that culminated with John McBride sharing the latest technology in sound mixing with a series of re-mastered recordings of iconic songs from Queen, Michael Jackson and the Beatles. What an incredible experience to be at Blackbird, and to breathe in the air that has inspired so many iconic recordings. 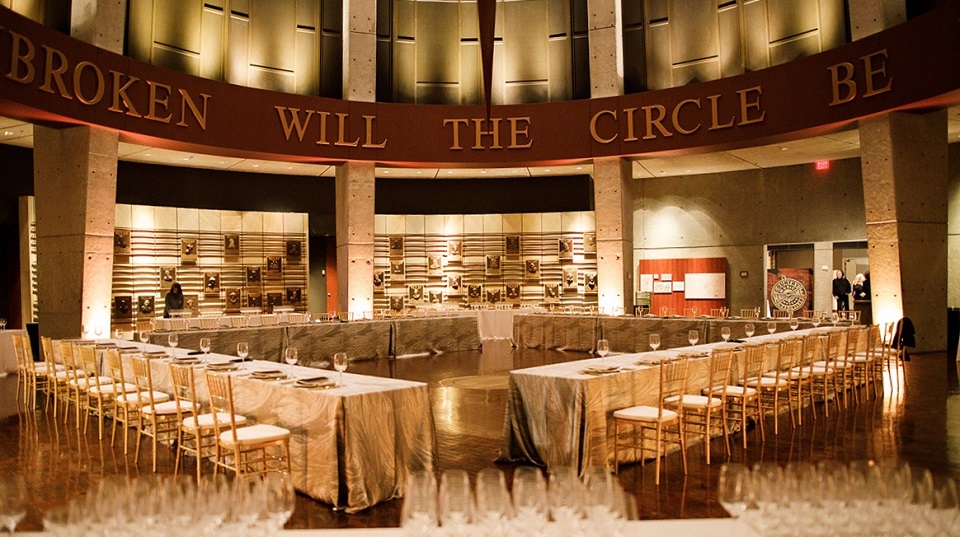 The Rotunda at the Country Music Hall of Fame.

The next day we gathered at the Rotunda at the Country Music Hall of Fame for the main event. A complete retrospective of Masseto is not the sort of thing that happens every day. First made in 1986 as Il Merlot dell’Ornellaia, Masseto has gone on to become one of the most highly sought-after wines in the world. Masseto emerges principally from three Merlot vineyards: ‘Masseto Alto, Masseto Centrale and Masseto Junior.’ The wine sees 3-4 weeks on the skins, followed by malolactic fermentation in barrel. The lots are aged separately for 12 months in 100% new oak, blended and then aged for another 12 months in wood. Earlier vintages saw shorter macerations and less time in oak, broadly speaking. Production is around 32,000 bottles. Readers who want to learn more about the history of Masseto might enjoy this article from some years back. 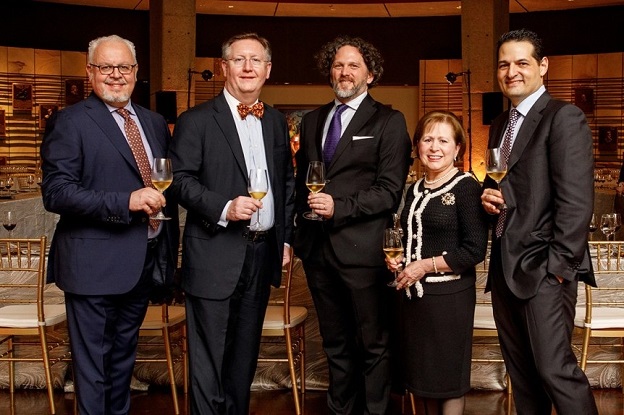 Steve and Pam Taylor, two of the biggest supporters of the Nashville Wine Auction, generously donated nearly all of the bottles for this tasting, with the estate adding a few of the harder-to-find vintages. As I always do with large retrospective such as this one, the wines were grouped into thematic flights rather than served chronologically – but I won’t take credit for actually naming the flights. Andy Chabot, Wine Director at Blackberry Farm, led a team of expert sommeliers through the daunting task of serving all of these wines over the course of dinner. I tasted through all of the wines before the event started.

These were all cool, rainy years, with the exception of the torrid 2003, which was the exact opposite. I must say, I really like Masseto in the cooler vintages, especially the recent cooler years. In the 1990s, the vines were still young, but 15 years later it is another story, both with regards to vine age and also the knowledge that is acquired over time. Masseto is a naturally rich wine, but in vintages like 2002 and 2005, more moderate weather provides a fabulous balance.

This flight was all about vintages that are ready to drink. I thought the 1994 was just sublime, but was also quite surprised by how well the 1987 had held up. The 2000 was also very much ready to go. The 2014, on the other hand, is a Masseto that still has many chapters in its history to write. 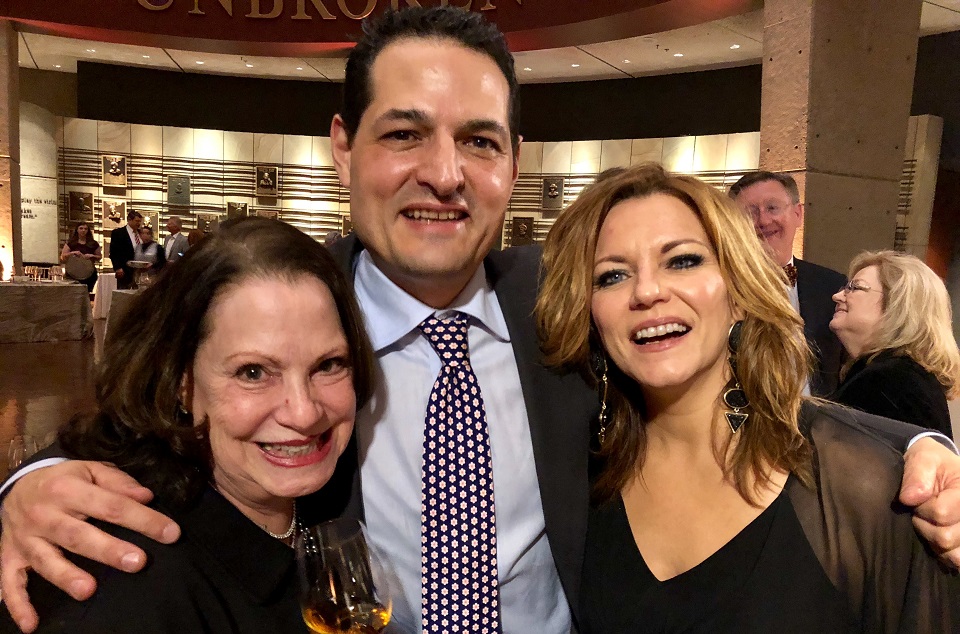 This flight explored a number of Massetos built more on finesse rather than power, although the 2007 was perhaps a bit of an outlier here. The 2004 was profoundly great, as it so often is. I also loved the 2013, one of the all-time greats. I found the 1996 and 1995 polar opposites; the former austere and unyielding, the latter racy and sublime to the core.

Of these four young Massetos, my vote is for the 2008. That wine was so tight and unyielding when it was young, and yet in every subsequent tasting it has gotten better and better. There is also something about the 2012 that is incredibly appealing, especially in the aromatics. 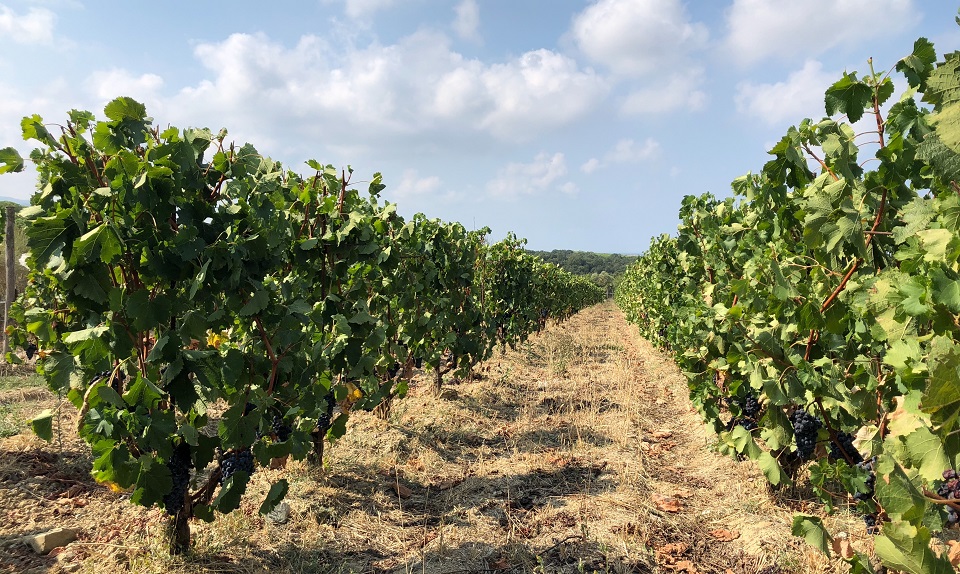 This grouping was the first of two flights dedicated to the all-time great vintages. I had a hard time picking a favorite, but the 2010 and 2006 are clearly towering and profound. Our bottle of the 2001 was not perfect. Maybe it’s time to taste them all side-by-side again…. 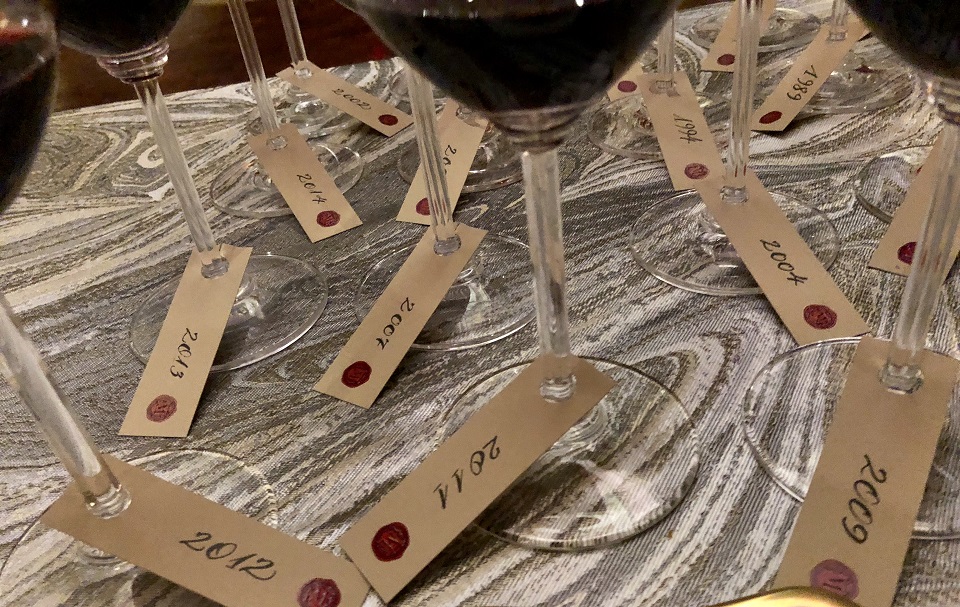 A complete retrospective of Masseto does not happen every day.

This flight explored legendary Massetos with age. Every bottle was magnificent. If forced to choose, I loved the 1998 for its opulence and the 1988 for its sense of classicism. Both were sublime, but the other wines in the flight were nearly as compelling.

All of these wines were tasted in January 2018. It’s always hard to know where in the calendar to slot in articles like this one that are about more than just wine, especially considering I had just done a big Ornellaia and Masseto write up the year before. I trust readers will find value in the tasting notes.