Burgundy’s ascension has created one or two inflated egos in recent years. Thankfully, most winemakers keep their feet on the ground. Even within the loftiest echelon of “superstars,” this cadre of winemakers remain unchanged, almost bemused as a pecuniary whirlwind whips up around them. They hold on to the positive traits of their personality that keep their feet on the ground. An exemplar is Christophe Roumier. His wines have become some of the most coveted in the Côte d’Or, with prices to match. Yet, Roumier, in person, remains self-effacing, down-to-earth and disarmingly amiable, shunning the limelight and trappings of fame when, it must be said, that seems to be the motive of others.

Such is the demand for Roumier’s wines that conducting an objective tasting has become almost impossible unless you are incredibly wealthy. Even then, just obtaining these rarae aves is challenging. It’s easy to forget that Roumier’s wines were affordable for many years, even to myself. When earning a pittance in my first wine job, I treated myself to a bottle of Roumier from time to time, tucked a few away and drank them on special occasions. My bank account has reprimanded me for not keeping them, but I would rather have the memories of consuming them. For a long time, Roumier’s wines were easy to obtain. Presenting not one but two Roumier-themed articles, I suggest viewing them not through the prism of today’s price tags but how they were priced on release. 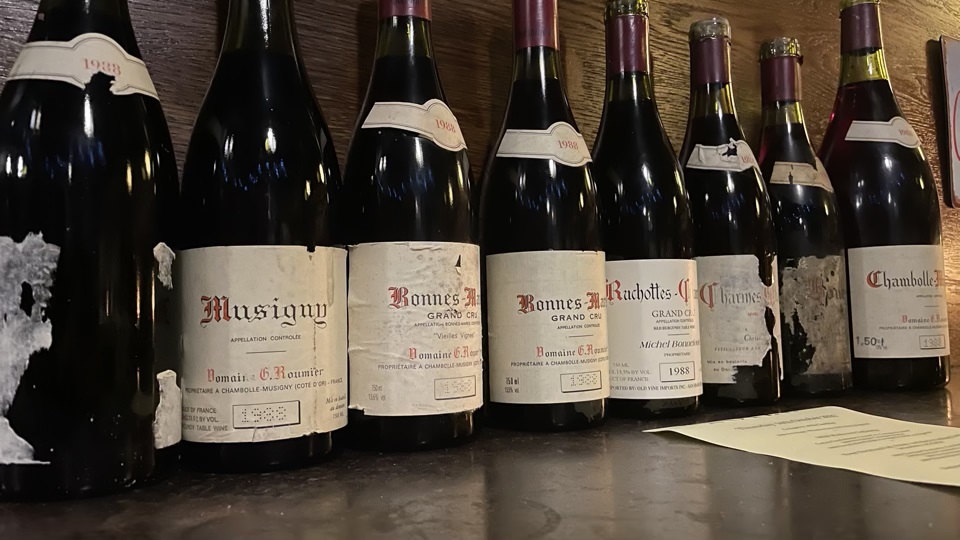 This week I am going to examine Roumier horizontally and vertically. In this first part, I take a cross-section of his portfolio in 1988 to juxtapose the crus against each other, and in the second, I focus upon a cuvée that did not exist in 1988, his Chambolle-Musigny Les Cras. I considered combining the reports, but analogous to Roumier separating Les Cras as a separate bottling, they work better as individual complementary articles. For a history of the Domaine, I recommend reading the article I penned in 2018.

My experiences of the 1988 vintage in Burgundy have been mainly positive. Except for Meursault, the Côte d’Or escaped frost damage. A clement, warm May allowed for an even flowering. June and July saw intermittent showers. Roumier remembers that the overall season was on the cool side though it remained dry and sunny, easy to manage from a viticultural standpoint. The season stumbled as harvest approached, the weather becoming inclement and wet, with temperatures that cooled off. Ergo, most in the Côte de Nuits delayed picking to the end of September and the first week in October. Late-picking meant that the wines were a little riper than usual, alcohol levels often over 13%. They also had relatively higher skin-to-juice ratios; meaning extraction had to be conducted prudently to avoid overly tannic wines. At the time, the reds were warmly received, especially by English critics who deemed them better than the frost and hail-affected whites.

For this tasting, I had the privilege to go through the full range of Christophe Roumier’s wines of that era, from the Bourgogne Rouge to the Musigny. “The 1988s revealed to be quite tannic wines after we made them,” Roumier explained, “but turned quickly more lush and elegant after they had gone through the malolactic fermentation.” 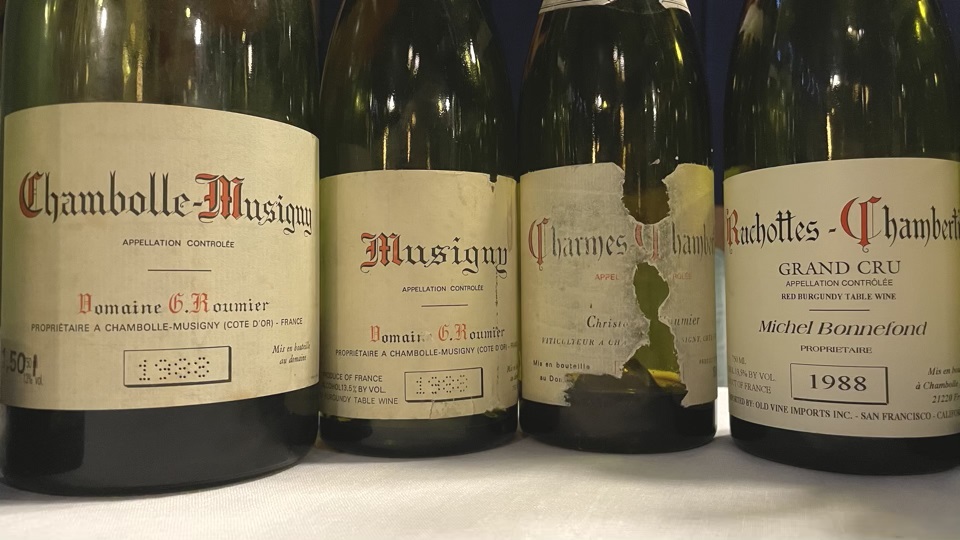 Generally, all the wines attested to their innate longevity, all mature and none I would describe as having fallen by the wayside, except the 1988 Bourgogne Rouge. At the time, it was fully de-stemmed and matured in 19 used oak barrels. It felt a little fatigued, the fruit having ebbed away some time ago…but hold on a moment. We’re discussing a humble regional red that offers a modicum of pleasure even after three decades. I’m being harsh…it’s our fault for drinking it too late. The revelation was the wonderful magnum of 1988 Chambolle-Musigny, matured in a modest 8% new wood. Quantity was large at 116 barrels, including two Premier Crus, Les Cras and Combettes, that at the time were blended into the cuvée. This has held on to sufficient red fruit, embroidered with a fine thread of acidity plus beguiling purity on the finish. I would love to know how much this sold for back then – a pittance?

The next pairing compared the 1988 Charmes-Chambertin and Ruchottes-Chambertin. The former comprised three barrels and delivered vibrant hoisin-tinged red fruit, satin-like textures and a slightly candied finish that suggests this was late-picked. Yet it was surpassed by the brilliant Ruchottes, suffused with mineralité and tension, articulating its limestone soils with panache, utterly enthralling, the archetypal “transparent” Pinot Noir.

The next pair was the 1988 Bonnes-Mares Grand Cru against the 1988 Bonnes-Mares Vieilles Vignes Grand Cru, the only year that it was commercially released. This was the fourth time I could compare them side-by-side, four times more than I ever envisaged. For a background to why Roumier elected to produce two cuvées, I refer you back to my aforementioned Bonnes-Mares article from four years ago; however, I must refine some information presented in that article. “The whole month remained cool and cloudy, except we had good harvesting conditions and without rain,” Roumier explains. “This is why I did not harvest the entire Bonnes Mares on the same day, as I realized that the older vines could ripen a little more, benefiting from the forecasted weather. Back then, the weather forecast was never as good as nowadays, but this was still an element for some decisions taken during harvest.” According to Roumier, the vintage yielded 11 barrels of Vieilles Vignes, of which five were kept and bottled separately and six barrels blended back into the regular Bonnes-Mares. According to Roumier, the vintage yielded 11 barrels of Vieilles Vignes. Of those 11, five were kept and bottled as the Bonnes-Mares Vieilles Vignes and the remaining six blended back into the regular Bonnes-Mares. This “return” into the main blend means that the two cuvées are not strictly a representation of young versus old vines as their label imply. It also means that since those 11 barrels contained 50% whole bunches, ergo, the regular 1988 Bonnes-Mares contains stems, just not as many as the Vieilles Vignes. 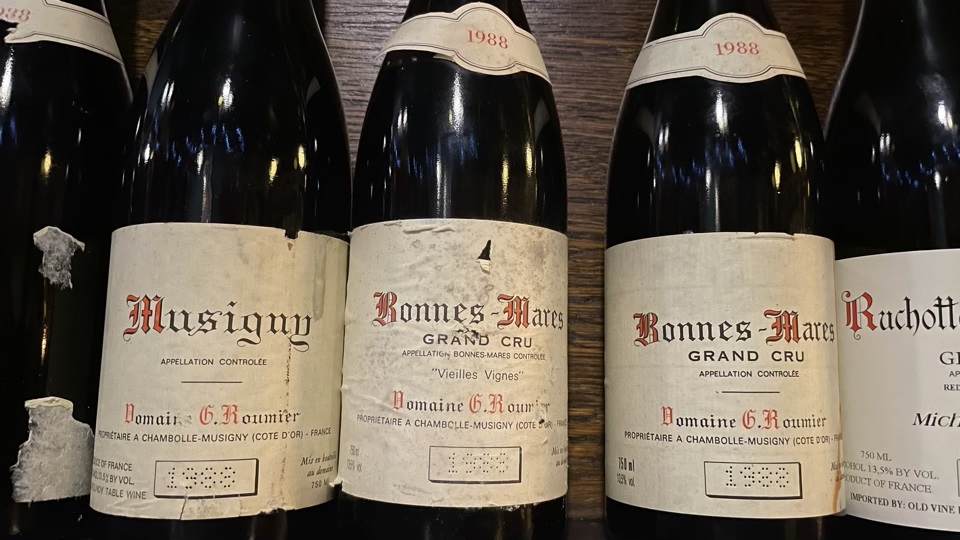 In the last three face-offs, against expectations, I favoured the regular Bonnes-Mares over the Vieilles Vignes. Even at the Bonnes-Mares vertical in London, when I asked Roumier which showed better, he admitted that the regular cuvée had the edge. Still, he was adamant that the Vieilles Vignes had the upper hand in previous comparisons. Here I was, ready to vindicate my recalcitrant view…but this is Burgundy. Nothing is predictable. On this occasion, served blind, the Vieilles Vignes showed more mineralité and complexity. It is perhaps the finest example that I have tasted. These two versions continue to make a fascinating comparison, though I think the Bonnes-Mares is more than a sum of its parts, the two together creating one of the Côte d’Or’s most exceptional wines.

Two heavyweights completed the evening. The 1988 Chambolle-Musigny Les Amoureuses 1er Cru is glorious, undimmed by the passing of time, an ethereal combination of the climat’s voluptuousness and sensuality with a slight edge imparted by the growing season. It is a multi-faceted diamond that continues to glisten. The elusive 1988 Musigny Grand Cru comprises just one barrel and one feuillette, the minute quantity compelling Roumier to add whole bunches. Having undertaken a vertical in Hong Kong in 2019, this was the only missing vintage, so it was satisfying to fill the gap - not easy when it sells for a cool £15,000 per bottle. As it transpired, this is one of the best Musignys I have tasted. That sounds glib, given how coveted and expensive this wine is, but when you only have a barrel to play with, there is no wiggle room; you take what’s given, good or bad. Though market prices suggest otherwise, it is less consistent than the Bonnes-Mares. The 1988 is a magnificent specimen, ineffably complex, with a thrilling crescendo that leaves you smitten in its presence.

It was a privilege to dissect a mature vintage from such a renowned winemaker and juxtapose the climats. They evince a gifted vigneron with many more brilliant wines ahead of him. In the follow-up article, I move forward in time to examine his Chambolle-Musigny Les Cras through multiple vintages.