The second part of my examination of Roumier centres on a vertical tasting originally due to start with Christophe Roumier’s maiden 1993. The bottles were, instead, accidentally consumed and enjoyed by thirsty “bystanders”. I cherish the thought that the wines fulfilled their raison d’être of being appreciated, liberated from analytical examination and pontification that is part and parcel of drinking Burgundy these days. The whole debacle put a smile on my face. Consequently, the purview was a complete run of Chambolle-Musigny Les Cras from 1999 to 2011, with three interpolated Les Cras from Domaine Ghislaine-Barthod to keep this taster on his toes.

A brief word about Roumier’s holdings in Les Cras. Roumier owns 1.76-hectares of vines divided into two plots, the larger at the northern extremity bordering Les Fuées and a smaller plot towards the southeast. The soil is heavy marl. The vines were planted in 1961, so you could argue that they are at the “peak of their powers,” not too old but with experience under their belt. In terms of winemaking, it’s pretty straightforward. Roumier sorts fruit in the vineyard and uses a sorting table installed at the winery reception. Depending on the vintage, he usually adds a small number of stems before fermentation in wooden vessels after a cool soak. As with all his cuvées, Roumier is prudent with the use of new oak. 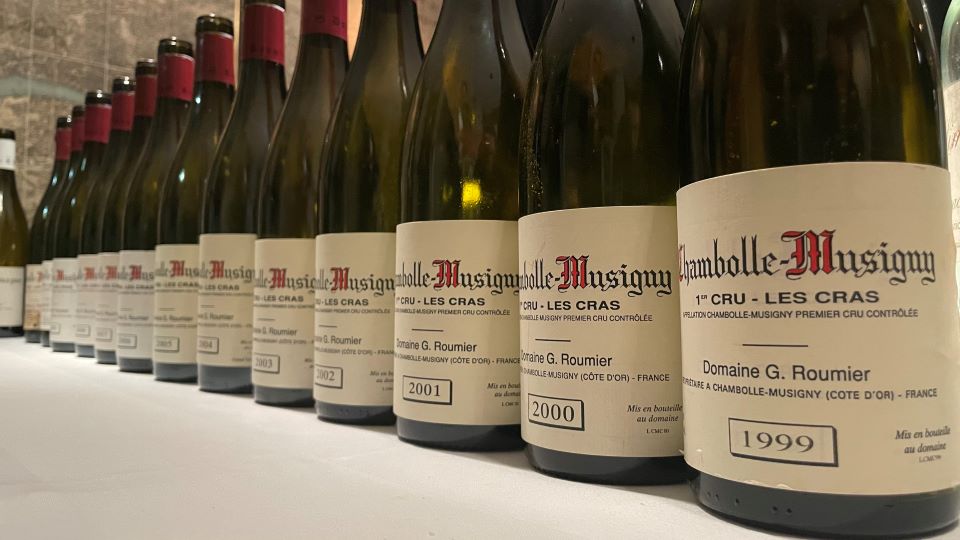 I admire this Premier Cru, up there with Les Fuées and Charmes. I guess the problem is being part of an “elite squad” fighting for attention against the esteemed likes of Bonnes-Mares, Les Amoureuses and Combottes. I have rated Les Cras highly, probably more than Roumier’s Clos de la Bussière, his monopole over the border in Morey-Saint-Denis.

These wines were tasted blind, which made it a far more interesting investigation. I felt that Les Cras is a “steady” rather than “stellar” performer, as if it knows its position within Roumier’s hierarchy. The exceptions were the intense 1999, ethereal 2002 and the sensual 2009 that all transcend the wine’s limitations, given a boost by benevolent seasons. Les Cras is not what I would call a “spectacular” Chambolle-Musigny, for it rarely achieves profound complexity and substance, the panache you find in, say, Roumier’s Les Amoureuses. The one duff vintage is 2004, which, I dare say, should have been blended into the Chambolle-Village. It is riddled with the so-called “green meanies,” just as I found when I first tasted it after bottling when my rather disparaging note elicited a typically polite reply from the winemaker – my first exchange with Roumier. It stuck out like a sore thumb in this line-up. It’s a sign of the times - despite its doubtful quality, such is demand, you’ll get little change from £1,000 per bottle on the secondary market. Whether that is a result of ladybugs or not, this vegetal character is endemic across the Côte d’Or. Though there are exceptions, it seems to affect even the most gifted winemakers.

This insightful tasting proved that Roumier can reach stellar heights and that he also translates the growing season for better or worse. To that extent, it was pretty easy to guess the vintages, which is a positive trait in my book, Roumier is never one to manipulate a wine into something it was not meant to be. Indeed, I would advise affording Les Cras several years in bottle and then drinking up to 25 years for the best vintages.