All too often, white wines are relegated to second-tier status, a sort of warm up for the reds that inevitably follow during most meals. I have long believed that white wines deserve a little more respect than that. Over the years, many of the most riveting experiences I have had have been with aged white wines. The objective of this tasting was to take a look at two of Burgundy’s benchmark whites across a number of vintages in order to gain a better understanding of how the style of the wines is expressed in those years. A few bottles were added at the last minute, so not all wines were tasted in pairs. For that reason, the notes are presented here by domaine, even though the wines were tasted from oldest to youngest in pairs where possible. 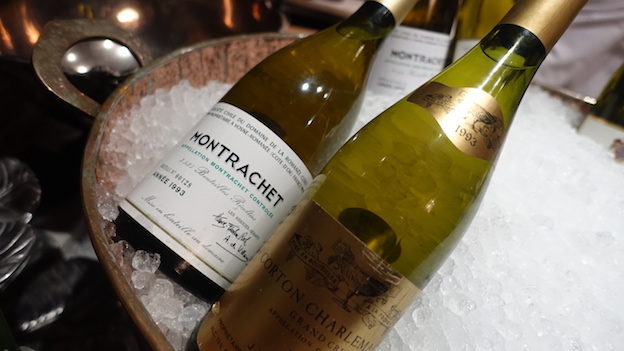 Sadly, in recent times, buying white Burgundy to cellar has become a risky proposition given the region’s well-documented issues with premature oxidation. Among other things, this means an entire generation of younger wine drinkers might never have a chance to experience the glory of aged white Burgundy. I am happy to report we did not have any prematurely oxidized wines on this night.

Jean-François Coche and his son, Raphaël, represent the essence of Burgundy’s vigneron culture. Unfazed by their rabid demand for their wines, the Coches remain down to earth and humble. Rare tastings and visits are granted only in the evening, when most producers are already done with their workday, as the family gives priority to their work in the vineyards during the day.

The Coches own about a third of a hectare in Corton-Charlemagne. The vines were originally planted in the early 1960s. Coche’s first vintage of the Charlemagne was 1986. Like all of the top whites here, the Corton-Charlemagne undergoes a long, slow élevage of nearly two years and is sold only when the Coches deem the wine ready. The Coche style emphasizes crystalline focus, energy and tension. When young, the wines often show an element of reduction that is one of the Coche signatures. 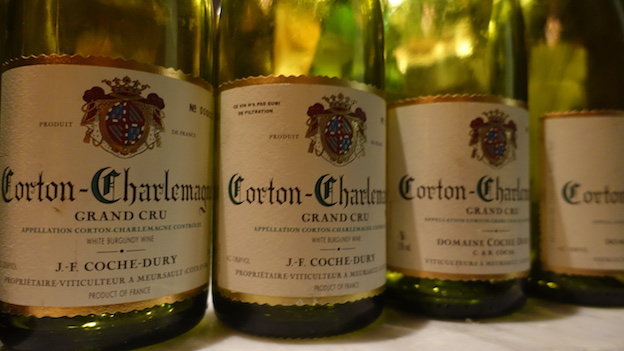 In this tasting, what surprised me most was how long the Charlemagne really needs to be at its most expressive. At a time when so many white Burgundies offer their best drinking early, the Charlemagne is exactly the opposite. It is a wine that takes time, both in bottle, but also in the glass. When young, what comes through most is Coche’s distinctive house style, while the personality and pedigree of the vintage emerge later. All of these wines, tasted after several hours, were even more expressive, vivid and nuanced than they were when first opened. 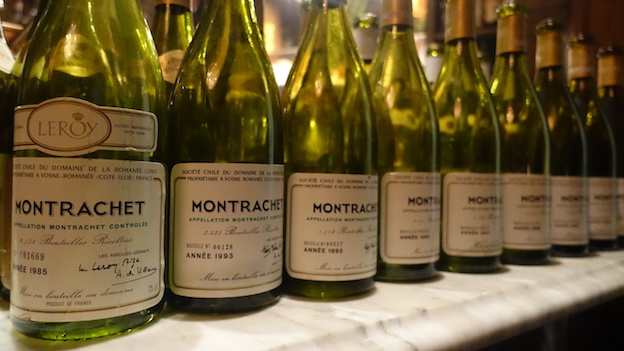 DRC’s Montrachet is distinguished by its textural richness and intensity, qualities that are especially pronounced in years where there is some botrytis. In other vintages, such as 1996, 2004 or 2010, the Montrachet can be much more mineral-driven and pointed. In all cases, Montrachet is a wine that communicates the personality of the vintage with an unmistakable sense of immediacy. For more information on DRC’s Montrachet, readers might like to revisit this recent vertical tasting.

Coche's 1991 Corton-Charlemagne is a wine of extraordinary precision and weightless elegance. Orchard fruit, white flowers, slate and white peppers are all beautifully delineated throughout. Striking in its perfume and transparency, the 1991 is simply magnificent today. Time in bottle has given the 1991 its unctuous texture, yet the wine remains remarkably fresh and capable of drinking well for another decade, perhaps more. What a gorgeous wine this is. The 1993 Corton-Charlemagne is remarkably vibrant and fresh for a wine of its age. Time has added a lovely patina of complexity, yet the 1993 is surprisingly dense and phenolic in style, with striking mineral-infused depth and creaminess. What a pleasure it is to drink, not taste, this magical white Burgundy.

The 1994 Corton-Charlemagne is almost shockingly vinous and intense for a wine of its age. Powerful, explosive and pliant, the 1994 possesses tremendous depth and freshness, with plenty of citrus, orchard fruit and floral notes. The 1994 is another wine that belies its age. The wine’s vibrancy and phenolic intensity are both truly remarkable. One of the more expressive wines of the night, the 1995 Corton-Charlemagne is now showing the softer contours and texture of a wine that is approaching maturity. Dried pear, sage, hazelnut and menthol shape the inviting, silky finish. There is a good bit of Coche precision, but the 1995 also presents distinctly tropical overtones that aren’t often seen in the Charlemagne. The 1995 is best enjoyed over the next handful of years, as it doesn’t quite have the structure of the very best years. Still, how many white Burgundies from the mid-1990s are this alive at age twenty? Not many.

Coche’s 1996 Corton-Charlemagne is one of the very finest wines I have ever tasted. Sadly, this bottle is off and not representative. In today’s day and age, it is virtually inconceivable to taste a ten year-old white Burgundy that is painfully young, but that is exactly the case with Coche’s 2006 Corton-Charlemagne. All the signatures are present – the trademark reduction, precision and salivating energy – and yet the 2006 needs time. The only question is how much. Hints of lime, slate, jasmine and white orchard fruit meld into the tense, pulsating finish. 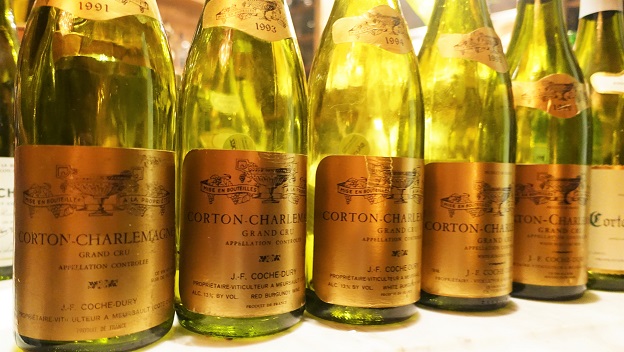 Readers will have to be patient with the 2007 Corton-Charlemagne, as it is still remarkably young and tightly wound. Slate, crushed rocks, pear and herb notes begin to emerge as the wine sits in the glass, but only with great reluctance. The 2007 is both vivid and powerful and yet, today, it only shows a portion of its ultimate potential. One of the most reticent wines of the evening, the 2008 Corton-Charlemagne is vibrant and intense, but it also comes across as a bit burly, rough around the edges and in need of cellaring. I very much like the wine’s explosive energy and overall intensity. There is plenty of the classic Coche crystalline vibrancy, along with real richness in the mid-palate that still needs time to fully emerge.

Readers lucky enough to own the 2009 Corton-Charlemagne will have a hard time keeping their hands off this beauty. The warm vintage has softened some of the contours, resulting in a Charlemagne that is surprisingly accessible at a young age. All the Coche signatures are present, the edges are a bit rounded, which results in a wine of frankly extra-terrestrial beauty. Smoke, slate and crushed rocks are some of the notes that lend nuance to the expressive, silky fruit. The 2009 somehow manages to be radiant and crystalline. This is about as great as wine gets.

The 1985 Montrachet comes across fully mature. Game, smoke, wild flowers, tobacco and dried orchard fruit all add to an impression of a wine that is now past peak. Resolved yet attractive, the 1993 Montrachet has held up well for a wine of its age. If anything, the wine’s power and overall intensity are both pretty remarkable for a wine of its age. Scents of dried pear, roasted nuts and smoke add nuance throughout. Although the 1993 has held up well, any remaining bottles need to be drunk.

Always an intriguing wine, the 1995 Montrachet shows all of its typically exotic, buttery notes, with plenty of candied citrus, hazelnut, honey and spice notes. The 1995 is one of the more flamboyant, opulent Montrachets of the 1990s at DRC, although this is not an especially fine example. One of the many highlights of the evening, the 1996 Montrachet is simply magical. Dazzling in its purity and intensity, the 1996 is endowed with crystalline energy and tension, not to mention exceptional overall balance. The 1996 is a decidedly mineral-driven Montrachet, with tons of citrus, white orchard fruit and floral notes, all buffered by bristling acidity and serious extract. Still very, very young, the 1996 will drink well for another 10-15 years. This is an extraordinary wine by any measure. 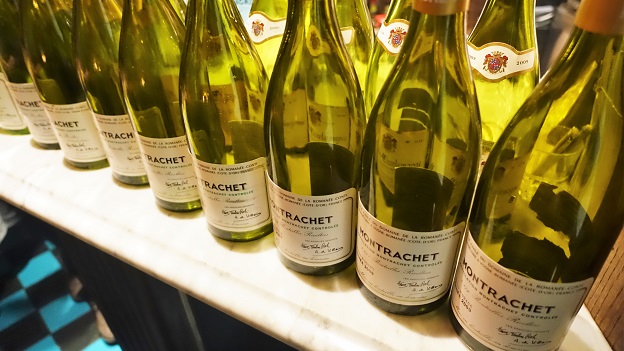 Finesse and power come together in Domaine de la Romanée-Conti’s 2001 Montrachet. Opulent, dense and wonderfully expressive, the 2001 is the kind of wine that can hold a taster’s attention for many hours. With time in the glass, the contours soften and the wine becomes even more voluptuous, but without ever veering into the realm of the tropical. This is a superb bottle. The 2006 Montrachet is an intense, phenolic wine endowed with remarkable power, structure and depth. Today, it is a bit monolithic, especially when compared with some of the vintages that follow it, most notable 2007, 2008 and 2009. With some coaxing, darker tonalities of orchard fruit, sage, chamomile and mint emerge, but the 2006 is a wine that still needs time. Even so, I don’t see the charm and arresting beauty of the very best years. Readers opening the 2006 should plan on giving it quite a bit of air.

The 2007 Montrachet, on the other hand, is super-expressive. Silky, perfumed and unctuous, yet also incredibly well balanced, the 2007 is utterly captivating. Scents of orange peel, smoke and pastry add nuance, but it is the wine’s cashmere-like feel that elevates it to the level of the truly sublime. One of the real standouts in this tasting DRC’s 2008 Montrachet is utterly captivating from the very first taste. Exotic and flamboyant to the core, with notable botrytis influence, the 2008 represents the essence of hedonism in white wine. Tropical fruit, butter, smoke, pastry, honey and wild flowers infuse the oily, viscous finish. The 2008 has long been a favorite. Tonight it is once again fabulous.

The 2009 Montrachet is equally compelling. Deep, unctuous and layered, the 2009 possesses exceptional balance and overall harmony. Orange jam, spice, wild flowers mint and apricots continue to blossom as the wine opens up in the glass. Despite the warm vintage, the 2009 is not as unabashedly opulent as vintages like 1995 or 2008, where botrytis adds sweetness, oiliness and texture. Instead, the 2009 is a wine from a radiant, warm vintage. That is exactly what comes through here. With each successive tasting, the 2009 continues to become more and more expressive.