Since I began writing about Bordeaux, I have profiled practically every major Bordeaux estate on the Left and Right banks. Coverage tends toward the best-known names, since they garner the widest interest. These are properties that are generally able to weather the storm of the current pandemic. There is money in the bank. The brand will always be globally recognized. Négociants will still need to run a business and request allocations once this is over. And self-isolating at your pad down in Cap Féret isn’t so bad. Of course, I would not wish the predicament on anyone, but the truth is that the short- and long-term effects of COVID-19 are not evenly spread.

What if you are not a famous name?

What if you are one of thousands of Bordeaux estates fighting for recognition?

What if you are not located in the most prestigious appellation, but one oft overlooked?

What if, after months of searching and negotiating loans, you were on the cusp of acquiring your first property when COVID-19 reared its ugly head?

Romik Arconian from Canon Chaigneau sent me an impromptu e-mail entitled “How do I get tasted” early this year. There was nothing new about that inquiry, and to be frank, I had never heard of the château. But the message piqued my interest and I decided to follow it up. Part of my motivation was that one easily falls into a ritual of reviewing less-renowned appellations almost by proxy, usually as a sub-section of a consultant’s portfolio, instead of actually going there. Lalande-de-Pomerol is so near and yet so far – Canon Chaigneau is located only a five-minute drive away from Petrus. Yet how often have I actually visited a property anywhere within that appellation? ”Not often enough” is the answer. So samples of older vintages were duly dispatched and a Skype call arranged so that I could put a face to the story unfolding away from the glitz of Grand Cru Classés. And I am glad I did. It was a welcome dose of reality, a pertinent reminder that Bordeaux is a fluid landscape of haves and have-nots. 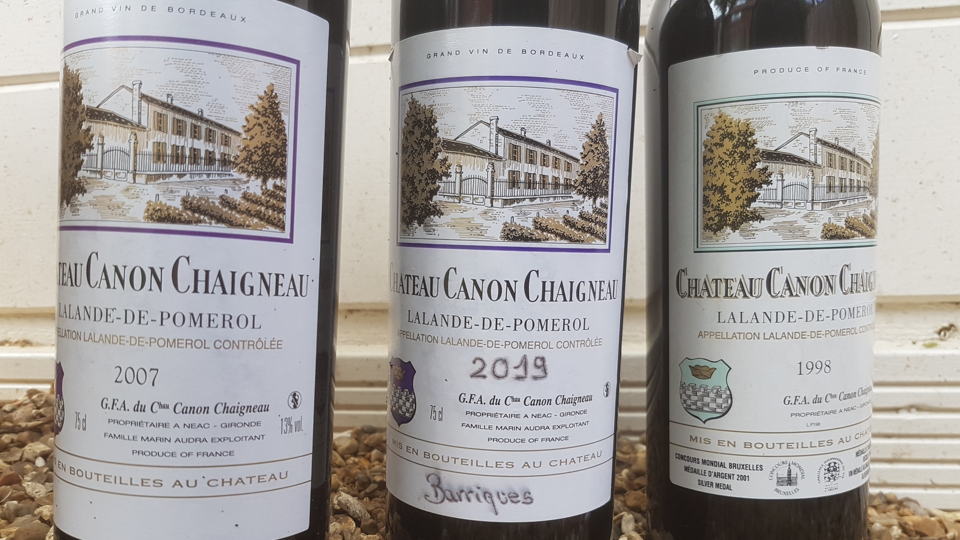 Arconian told me that the Marin family (émigres from Algeria) has owned Canon Chaigneau since around 1961. They expanded plantings from a two-hectare nub located close to Château Siaurac. The children inherited the estate after their parents passed away at the end of the 1960s. Louis Marin took over as vineyard manager. Incidentally, his son is a chef at Cheval Blanc. Since there was no obvious heir in waiting, the family saw little option but to put the estate on the market. So how did it end up (almost) in the hands of Arconian?

“I was actually born in Wimbledon [London], my dad is Armenian and my mother English,” he told me. “I did my third year of studies in Paris, finished my degree in French and economics, and moved back to Paris after graduating, starting my own wine distribution company in 2005. I sold my wine business in Paris in 2017 to Matthieu Decoster, whose family owns La Fleur Cardinale. I had been looking for a property for a while. Having worked in the wine industry, it seemed like a natural progression. I was considering more the south of France, but everything is so expensive and you don’t really get much value unless you go to Côte de Provence or Côteaux d’Aix, where it is difficult to sell the wines for much more than the cost of making them. I love Pomerol, but that was too costly. But I did want an interesting appellation. I didn’t know Lalande-de-Pomerol, at least not as much as I do now, though I was open to anywhere. Canon Chaigneau was actually beyond my means, so I was looking for investors, and in the end, one or two dropped out. But the owners agreed to stay on as minority shareholders with 30% of the business. I had to take a large bank loan – a bit of a headache with what is going on at the moment.” 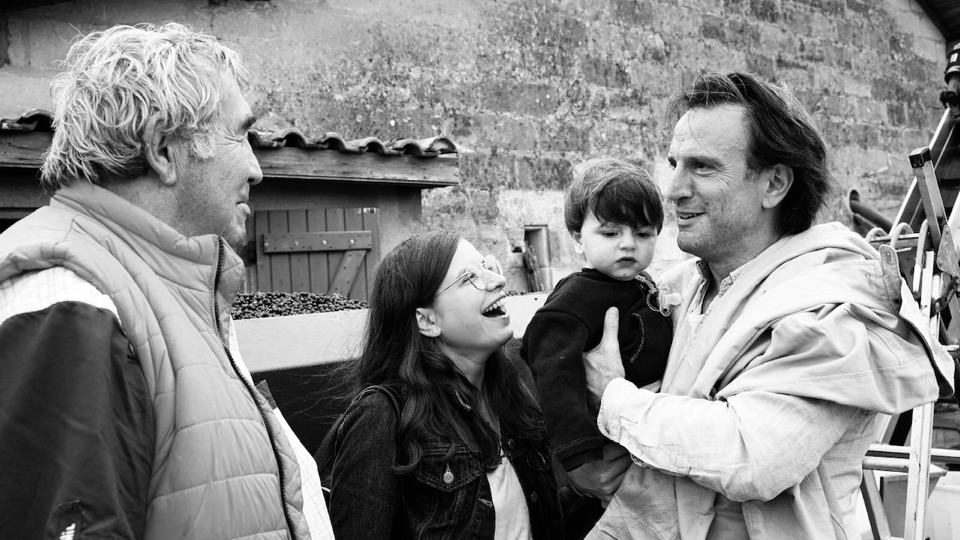 This photograph symbolizes Bordeaux: outgoing proprietor Louis Marin on the left, representing what you might call “old Bordeaux,” and the incoming Arconian family, Romik and his wife Marine with their young son, about to chart a new course.

This is what Arconian is hoping will happen. In 2020, all plans are up in the air. “We were due to sign at the end of March,” he explained. “It got delayed as SAFER has to grant a two-month right of first refusal to purchase the property, which is apparently a formality. But until they get back to work, the two-month period cannot start running again. We will sign hopefully in May when this is over.”

And how does he feel about the future? “Of course, I’m terrified at the prospect of having to sell all this Bordeaux, since the market has already been very difficult, and moving forward, with the predicted recession, potentially even worse. But I convince myself that it will be okay, given the quality of terroir and also the winemaking under the guidance of Thierry Garnaud, who was at Cheval Blanc for so long. I think... I hope that the banks will be patient enough to allow us to get through what might be a few difficult years. There is a lot of very good-quality competition at our price point, though, both in Bordeaux and elsewhere.”

I asked Arconian about the economics of selling Bordeaux at this price level. Historically, the Marin family had sold a large part (and occasionally the entirety) of their production to négociants or bottled under different labels for between €3.50 and €5.00 per bottle.

“I think despite the conditions, we should be able to do it. It is certainly more difficult to sell Bordeaux and Bordeaux Supérieur than appellation wines. Consumers like an appellation even if they are not overly familiar with it. They recognize it as a stamp of quality. Nowadays, even entry-level Pomerol wines have become so expensive that you cannot get a Pomerol of decent quality at retail now for €30 or €40. I don’t think a lot of people know there is a difference between Pomerol and Lalande-de-Pomerol, and a lot of wines from Lalande-de-Pomerol are as good as Pomerol anyway, so they can offer bang for the buck. People want to spend around €20–25 in a wine shop. We have back vintages to sell and at the moment I don’t know how much to sell en primeur. Ideally, I would like to release the wine when it is ready to drink because so many restaurants sell wine that is much too young. It doesn’t make sense.” 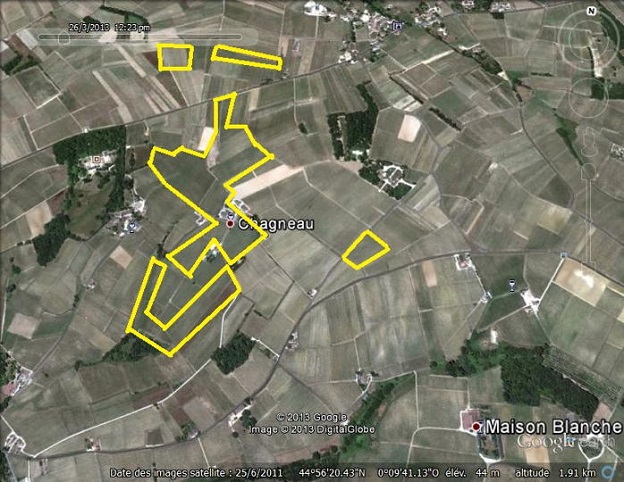 This aerial shot shows the location of the vineyards. The wooded area is Siaurac, now owned by Artemis Domaines.

At least the Marin family maintained the 21-hectare vineyard in good condition, the vines tended lutte raisonnée (so no long-term pesticide usage to eradicate) and replaced when they died. The vineyard is comprised of 90% Merlot, 5% Cabernet Franc and 5% Malbec that had all been harvested mechanically in the past, though Arconian plans to change to manual picking, calculating that cost-wise, it does not work out that much more. The winery is what you might call “old school,” with a high ceiling and thick walls, equipped with ceramic tanks. “I am a big fan of López de Heredia, so I like the old-fashioned way of winemaking,” Arconian told me. “When it gets too hot we have to manually cool things off by opening windows and using ice. I would like to install thermo-regulation, but of course, that costs. If the ferment gets stuck, we use the pressed wine to get it going again.”

There are clearly challenges ahead for Arconian, but challenges that are not insurmountable. His wife, Marine Fontana, graduated as an agricultural engineer, and she is due to take over as vineyard manager, although she will have her hands full as she is expecting their second child in October. Tasting through vintages spanning the last 20 years, if I am to be honest, I found older vintages telling a story of untapped potential, intermittent releases such as the 2007 and 2012 showing what could be achieved and others failing to pass muster. This can be attributed to reliance on mechanical harvesting and absence of temperature control in what is a rudimentary winery. Recent vintages show much more promise, not least the two cuvées from 2019, the first where the prospective new owners had a hand in the winemaking. “The 2019 Canon Chaigneau is a 66,000-bottle production matured in 33% new oak, 500-liter barrels from Taransaud, Sylvain and Demptos chosen by Thierry Garnaud,” Arconian explained. “There is another cuvée that will probably be bottled earlier, which is matured just in the cement vats, though I’m not sure of the name yet.” I actually preferred the cuvée that I provisionally titled “Ex Animo,” since it showed impressive brightness and vigor.

It is always enjoyable to write about a property opening a fresh chapter, looking ahead to new possibilities. That it coincides with such upheaval must surely cause sleepless nights in the Arconian household. They put everything on the line to support their growing family, only to see their dreams jeopardized by a virus beyond anyone’s control. No doubt they are not the only ones in a similar situation. Alas, I cannot write about every Bordeaux estate, but hopefully this piece serves as a reminder that this vast region is not only about the affluent Grand Cru Classés, and that not far from multi-million-euro wineries lie others dreaming about fermentation temperature control. These smaller, less well-known estates are Bordeaux’s lifeblood. Its future depends on people like Arconian reinvigorating previously underperforming châteaux and offering Bordeaux lovers something new and something affordable, especially if the region hopes to recapture a younger audience.