Covering Burgundy often feels like running a marathon, where upon entering the home stretch, you hear somebody bellow that there is another lap to go. So, you go around again, only to find that there is another lap, and another, and so on, ad infinitum. It never ends. (Sounds like a Black Mirror episode.) Apropos of Burgundy, you can guarantee there is always something over the horizon: one more producer whose doorbell you never rang, a tip never acted upon, or the disquieting feeling that the next big thing is tapping its fingers, just waiting to be discovered. So, after publishing the largest report of my career, here is another tranche of additional 2019 Burgundy notes. These come mainly from one UK importer whose annual tasting was cancelled as the country reentered lockdown. They responded by personally driving samples down to my abode. The assemblage includes a number of producers that I was eager to taste, so I appreciate their effort. These notes are augmented by reports on two or three producers, such as Château Corton C. and Albert Morot, who sent samples directly. A further tranche will be added so long as couriers can overcome the challenges of importing samples from France after Brexit. But, since the wines in this article are being offered at the moment, I saw no reason to wait.

These 2019 Burgundy additions include several producers from the Côte Chalonnaise, among them the leader of the pack, Domaine Vincent Dureuil-Janthial, the “king” of Rully, whose wines I have adored since the early Noughties. In 1994 the domaine passed into the hands of Vincent and his wife Céline. They own 17 hectares split between Rully and Mercurey, plus another three hectares in the Côte d’Or. Vines have been farmed organically for over a decade, the Chardonnay undergoing a hard pressing to impart a higher percentage of solids in the juice. New oak is prudently used, never more than 20% for the whites and 30% for the reds. The result is an invariably complex wine that habitually transcends expectations of modest appellations such as Rully or Mercurey. I plan to visit as soon as it becomes possible in order to taste the entire range, but the four wines here give an idea of what was achieved. Readers will also find reviews for Domaine François Lumpp, one of the leading Givry producers. Lumpp, now accompanied by his children Pierre and Anne-Cécile, is another grower who practices fastidious vineyard husbandry, perhaps utilizing a little more new oak than Dureuil-Janthial, though it is never excessive. His 2019 Givry à Vigne Rouge would give many Premier Crus in loftier appellations a run for their money and beat them hands down in terms of value. 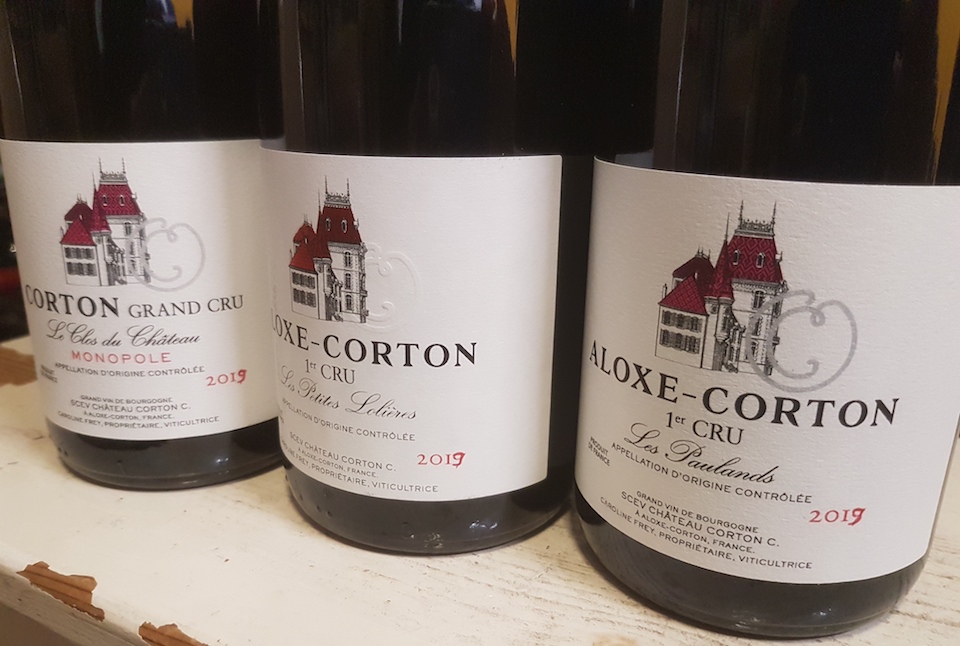 Another plan for 2021, assuming that travel becomes possible once again, is to restart my annual trip to the Mâconnais. That trip has been curtailed in recent years for various reasons, much to my displeasure, because this region is vastly improved and represents a less expensive alternative to the Côte d’Or. Fingers crossed, I will publish a standalone report on the region, but I could not wait to sing the praises of Domaine Frantz Chagnoleau. Husband-and-wife team Frantz Chagnoleau and Caroline Gon have been conjuring top-drawer wines from their 6.8 hectares scattered across Mâcon, Viré Clessé, Saint Véran and Pouilly Fuissé for a few years now. (Incidentally, Gon runs Dominique Lafon’s Mâcon operation, whose 2018 and 2019s are reviewed in the Côte de Beaune part of my report.) In 2019 the pair oversaw one of the finest wines from Viré-Clessé that I have ever encountered. Don’t read another sentence until you’ve tried to secure a few bottles.

Of course, there are additional producers from the Côte d’Or. I specifically wanted to review the 2019s from Domaine Joseph Colin since Joseph Colin split from his brother Damien at Domaine Marc Colin. The division does not appear to have been detrimental to either winemaker, and though Damien kept the Grand Cru jewels, Joseph’s wines from his seven hectares in Chassagne-Montrachet, Saint-Aubin and Puligny-Montrachet, all made with minimal use of SO2, have been very promising. Another producer whose 2019s hold a lot of potential is Domaine Confuron-Cotétidot. Farming 12 hectares of vine organically, their style almost goes against the grain in Burgundy, not in terms of whole-bunch addition, but insofar as Yves Confuron’s tenets lean toward late picking and away from the “infusion” maceration currently in vogue. I must admit that previously I have found their wines inconsistent, but I always approach each vintage with a clean slate, and I discerned less variability in their 2019s. The selection is crowned by a marvelous Mazis-Chambertin and a lovely Gevrey-Chambertin Lavaut Saint-Jacques. Confuron also makes the wines at Domaine de Courcel in Pommard. Again, I confess that I often find these wines excessively green, and here, the four that I tasted lacked cohesion and displayed unwanted green, bitter finishes. I always get the feeling of tasting two dichotomous wines in my glass, one pursuing ripeness and opulence and the other more herbaceous and tertiary. The problem is that they do not gel but jar together.

I will also draw attention to Château Corton C. This is the renamed Château de Corton André, which in 2014 was bought by the Frey family, proprietors of La Lagune and Domaine Paul Jaboulet Ainé in Bordeaux and the Rhône, respectively. I was pleasantly surprised by the quality I found, especially with respect to their fine 2019 Aloxe-Corton Les Paulands 1er Cru and a very winsome 2019 Corton Le Clos du Château that bodes well for the future. I appreciated the understated style of these wines and look forward to tasting more in the future.

Another vineyard and another monopole to keep your beady eye upon is  Pommard Clos de la Commaraine. Harvard professor Denise Dupré and Mark Nunnelly, former managing director of a Boston-based capital fund, bought this 3.75-hectare vineyard in 2017 from Domaine Jaboulet-Vercherre, who had been selling the fruit to Louis Jadot and Pierre André. The property lies adjacent to the village’s northern flank. Dupré and Nunnelly appointed Louis-Michel Liger-Belair to oversee production, and I could see his signature in this 2019. While I think it does not quite have the pedigree of the top Pommards from, say, Les Rugiens or Les Pézerolles, its potential is clear to see. This tasting note is accompanied by several from Dupré and Nunnelly’s Meursault-based négociant label Les Parcellaire de Saulx, under the direction of Jean-Luc Vitoux. I have to admit that I did discover quite a lot of variation in quality here, especially with some Village Crus that felt chewy and rustic, and a Nuits Saint-Georges Les Murgers burdened with too much oak that occluded the terroir. On the other hand, the Aloxe-Corton Les Guérets 1er Cru is much more promising. I suspect that a little tweaking in terms of sourcing might be needed to achieve greater consistency. Pending any Brexit-enforced delays at the Channel ports, I should be receiving further samples from Dupré and Nunnelly’s other label, the Rully-based Domaine Belleville, in forthcoming days. 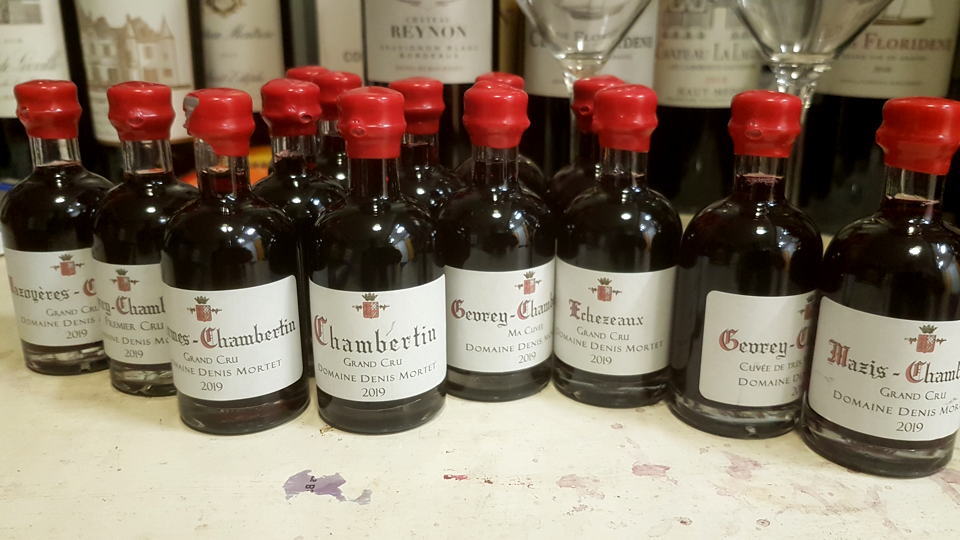 Just in the nick of time, I received samples from Domaine Denis Mortet in Gevrey, a producer that I was scheduled to visit prior to France re-entering lockdown. Arnaud Mortet, meticulous as ever, extracted samples from barrel and sent them in miniature glass bottles and waxed each one for that authentic touch. These 2019s include both Domaine and négociant labels, the latter whereby Mortet has 100% control of the vineyard and winemaking. These are labeled under his own name. His 2019s are extremely impressive in terms of capturing and controlling the intensity of the vintage and imparting an almost sorbet-like freshness, reaching its zenith with a fabulous Clos de Vougeot and Mazis-Chambertin.