Before clocking out for the day and inspired after putting the final touches to the Norwegian fjords, God created a small amphitheatre a few kilometres southwest of Chablis. Perchance adding a little drama to the rolling landscape. Unwittingly, He created a meso-climate that is warmer than its surroundings, rendering its steep slopes suitable for red varieties in a sea of Chardonnay and Sauvignon Blanc. Today, Irancy is an unspoiled, tranquil village that feels secluded, despite its proximity to Chablis, encompassed by serried rows of vine and orchards. It’s a “lesser-spotted” appellation that is finally becoming more noticed as increasing numbers seek less budget-crippling alternatives to BBB’s (Burgundy beyond budget). 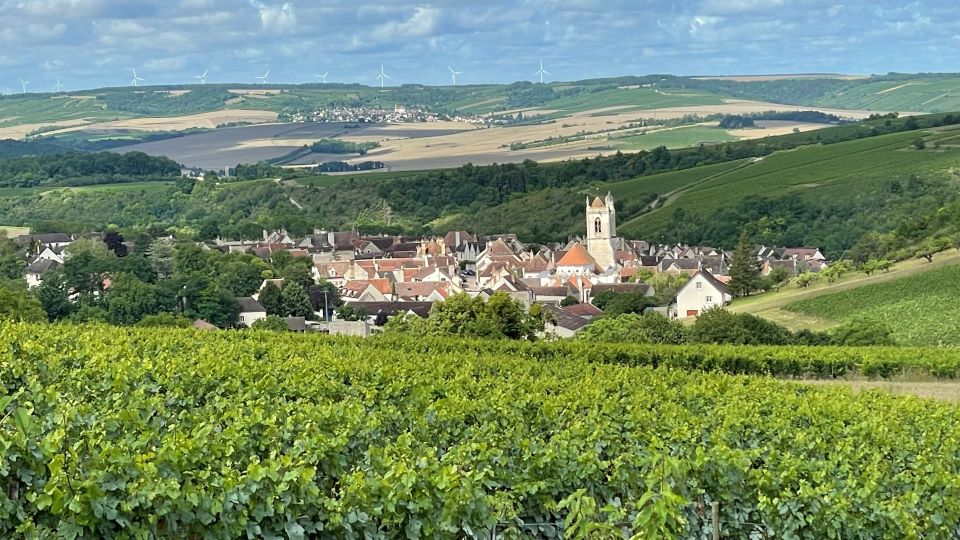 The village of Irancy nestled at the foot of the amphitheatre.

Since last year’s report on the 190.5-hectare appellation was well-received, during this year’s trip, I, once again, asked the BIVB to organise a blind tasting of producers. This year, I threw off my duvet early in order to walk around vineyards, before ringing the doorbells of two of Irancy’s leading producers: Benoît Cantin and Thierry Richoux. (For a brief introduction to its history, vineyards and viticulture, I recommend reading that report.)

Focusing on the 2020 and 2021 vintages, I found that the former really suited Irancy’s aforementioned meso-climate. Generally, the standard is above those I found in 2018 and 2019 as its slightly cooler summer reined in some of the excess its wines can display. Perusing the spec sheets, there is now a dominance of pure Pinot Noir over the inferior César that could dominate blends before appellation rules were introduced, since limited to 10% of the blend. Frankly, it adds nothing to a blend, and if anything, detracts from it, not unlike adding bagpipes to a violin solo.

There is still some way to go. I found some under-performing wines that come across rather saccharine and candied. Irancy’s potential is consistently shown by its undisputed leading producer, Thierry Richoux, where the tousle-haired winemaker is passing the baton to his sons, Félix and Gabin, who joined in 2013. Their 19 hectares of vine are located in some of Irancy’s prime climats such as Cailles, Veaupassiot and Palottes. The Richouxs are meticulous. Their vineyards were certified organic by Ecocert in 2010. Biodynamics was introduced the following year albeit without certification for the moment. “We usually prune at the beginning of December,” Thierry Richoux explains. “I would like to start later, but we have 21 hectares and so we have to finish in a good time.” Yields are kept low. “The figures are quite easy to remember,” Gabin Richoux tells me. “They were 30hL/ha in 2019, 20hL/ha in 2020 and then just 10hL/ha in 2021 picked Monday to Friday from 24 September…” I almost quipped that mathematically the Richoux’s should expect nothing in 2022, but that would be tempting fate. Incidentally, if you think those figures are low, the average yield in the frost-affected 2016 vintage was a paltry 8hL/ha. 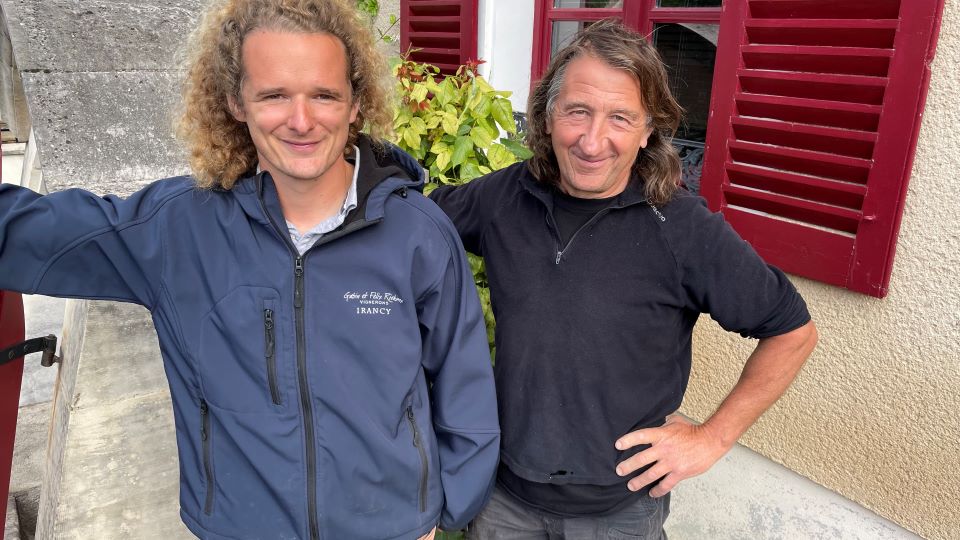 The fruit here is completely de-stemmed, though personally I am intrigued what a few stems might add. They use natural yeasts and minimal SO2, though Richoux admits that they used a little in 2021 due to poor sanitary conditions - they are not hidebound by dogma. “Even though we have two sorting tables, the fruit still needed some protection,” he explains. Maceration is around two weeks, sometimes three, though again, the Richouxs adapted their approach in 2021 and conducted a shorter maceration, with no pigeage and just a gentle remontage.

Their new winery has afforded them a clean and spacious environment to work in. This is crucial here because of their policy for a long élevage, a minimum of 18 months in a combination of foudres and cement vats before transfer into oak barrels. “We normally do a three-year élevage,” Thierry Richoux tells me, “We have only just finished bottling the 2018s.” Yet, the prudent use of wood contact and a hell of a lot of patience always knits their wines together beautifully. I also tasted the 2019 and 2020 Irancy Merci La Foule which comes from a 0.20-hectare parcel of high-density planted vines – 23,000 per hectare, trained on individual stakes and containing 100% whole bunch, not that you can tell in the final wine. Just one barrel is made per year…but it is spectacular. You’ll have to wait a couple of years for the 2020 but make it known to your merchant now that you’re interested. 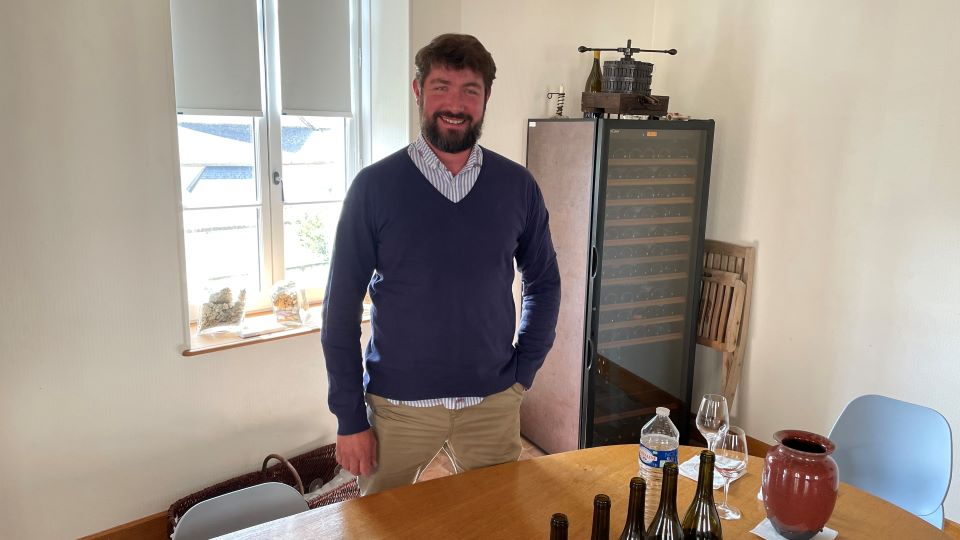 Just as Irancy has its leading producer setting benchmarks, so does neighbouring Saint-Bris in the form of Domaine Goisot. I have been following, reporting and waxing lyrical about Jean-Hugues and his son, Guilhem Goisot’s wines for a number of years now. It is Guilhem who introduced biodynamics in the vineyard, and like Richoux, applies an attention to detail expected of a leading Côte d’Or producer, albeit without the same financial returns. Goisot’s quality remains superlative, and their retail price almost criminally undervalued.

“We started picking on 10 September in 2021, later than other years,” Goisot tells me in his tasting room. “We picked over three weeks…for a small harvest. The Pinot Noir matured first, but we had to pick quickly, especially for the whites - exactly when the parcel was ready, almost to the hour, sometimes just one or two hours in a day.

Yields was very low. I did no pigeage, just some pump-overs during a 24 to 25-day maceration, the fruit 100% de-stemmed. The wines are matured in one-, two- or three-year old plus new barrels (Chassin and Rousseau) with no racking.”

Irancy and Saint-Bris are definitely appellations to keep an eye on. I’ve been saying that for a few years now. They just need a few more names to join the charge to help place them at the forefront of minds. With global warming, I sometimes wonder whether Irancy’s meso-climate could become a hindrance; notwithstanding that located in northerly latitudes, both Irancy and Saint-Bris are prone to frost, as it transpired in 2016. Admittedly, neither is ever going to become large-volume appellations that can slake the thirst of Burgundy-lovers seeking affordable alternatives. Yet, they boast a lot of potential and as already seen, in the right hands, their wines can rank as some of Burgundy’s most intriguing, complex and terroir-driven.