Striving to give readers the lowdown on London’s hottest restaurant openings, yours truly visited Trivet exactly a month and a day after it opened. (I always allow a new restaurant to settle down and tackle any teething problems before casting judgment.) Trivet has serious credentials; it’s the first restaurant by two alumni of The Fat Duck, where Jonny Lake was head chef for 12 years and Isa Bal MS the highly regarded head sommelier. There are parallels with another destination restaurant, Clare Smyth’s Core, in terms of a chef leaving the shadow of a high-profile name and striking out on their own. Gordon Ramsay’s protégé succeeded in winning two Michelin stars for Core just a year after opening. Does Trivet covet the same ambitions? 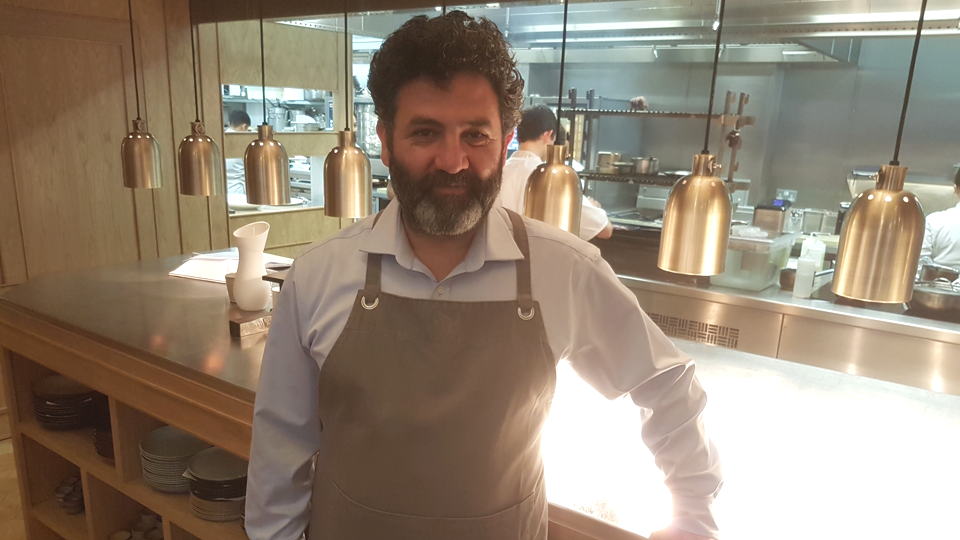 Named after the iron plate that you rest hot pots and pans upon, Trivet is located a couple of minutes’ walk from London Bridge station. It’s tucked away out of sight, and consequently I had to follow Google Maps until I was virtually outside the front door. The interior decor follows similar lines to that of Hide: spotlessly clean, wood as smooth as a baby’s bottom, that Nordic aesthetic that’s so in vogue. The restaurant is partitioned so that one side accommodates mustard-colored banquettes and opens only in the evenings. A partially open kitchen lends atmospherics and allows diners to see firsthand the fastidious preparation of each plate. There is also a chichi bar at the entrance. As an aside, Bal told me that they have introduced a separate bar menu. You could argue that the decor lacks a little warmth and coziness and might not be the first choice for, say, a couple seeking an intimate romantic dinner. 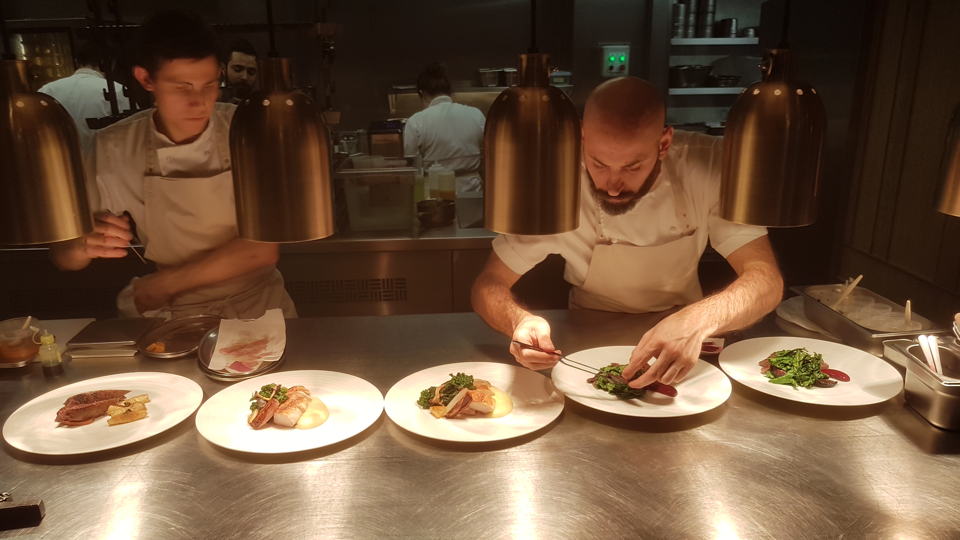 Plating in the open kitchen

There is no set lunch (an oversight that I think should be addressed to increase bookings during the day) nor any set tasting menu. While Trivet’s menu is limited, the wine list comes in a hefty 60-page leather-bound tome containing an eclectic and assiduously chosen 350 wines. It takes the novel approach of corralling wines in chronological order of when the respective countries began to make wine, all the way back to 6000 BC. It also means there are good selections from Greece, Turkey (Bal’s country of birth), Armenia, Syria and Eastern European countries, inter alia, not to mention a fair few Japanese sakes. The selection from classic regions, most notably Bordeaux, is small by comparison. Bal told me that he does plan to expand this in the future, though frankly I am quite content with the current gallimaufry of bottles from all corners of the world. One small feature I appreciated is a legend indicating not just the wines available by the glass, but natural and biodynamic wines and “funky” wines with the obligatory sketch of a bearded dude.

But we’ll get to the wine later. How about the food? Like The Fat Duck, does it involve listening to waves lapping on a shore on an iPod as we devour a miniature beach? Err... no. 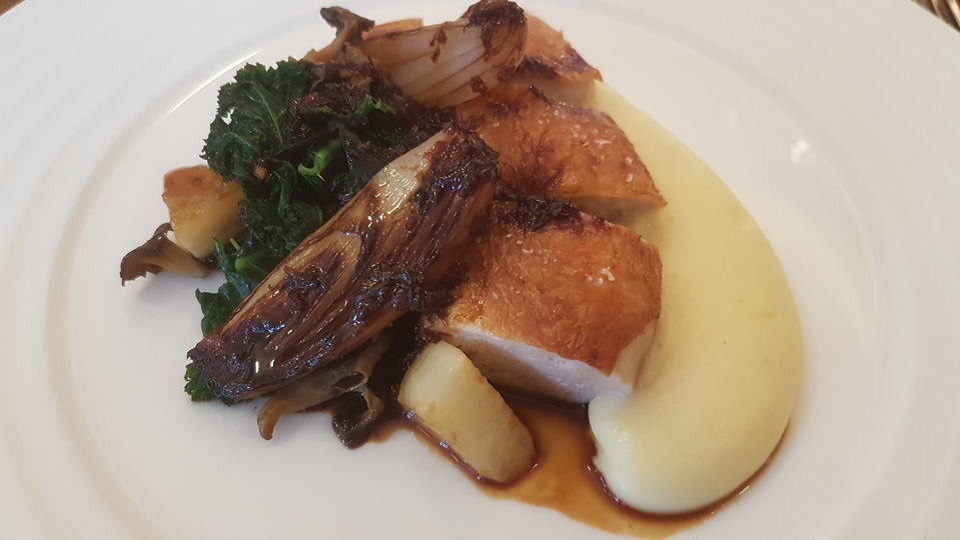 The menu itself is limited to five starters, five mains and five desserts. After a gooey warm sourdough from Devon with cube of cultured butter, I could not resist the scallops with barbucine and sesame, seasoned with Buddha’s hand, an odd-looking yellow Asian fruit that does resemble a deformed hand and tastes like the second cousin twice removed of Japanese yuzu. The scallops, from the Orkney Isles, were more thinly sliced than you might find elsewhere and displayed a perfect soft consistency, their natural sweetness offset by the bitterness imparted by the barbucine, partially charred and lending a smoky, ashy aroma. This was an outstanding starter.

We ordered two mains. My chicken with vinegar sauce, kale, roasted onions, puréed potato, button turnips and pomegranate seeds was devilishly simple but utterly delicious. The red wine vinegar reduction was the guiding hand and discreetly lent a slightly acrid bite to the perfectly cooked chicken, while the kale was not too strong or bitter. 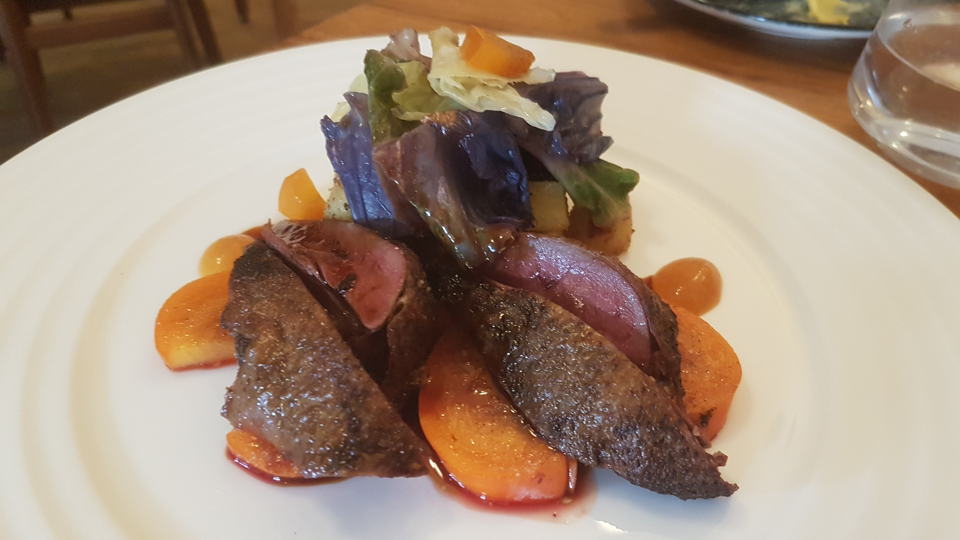 The sliced roasted pigeon was pink and tender, having been marinated overnight in milk and yogurt. It partnered beautifully with the persimmon, given lift by the earthy chervil root. This was a stunning combination and outshone the chicken. 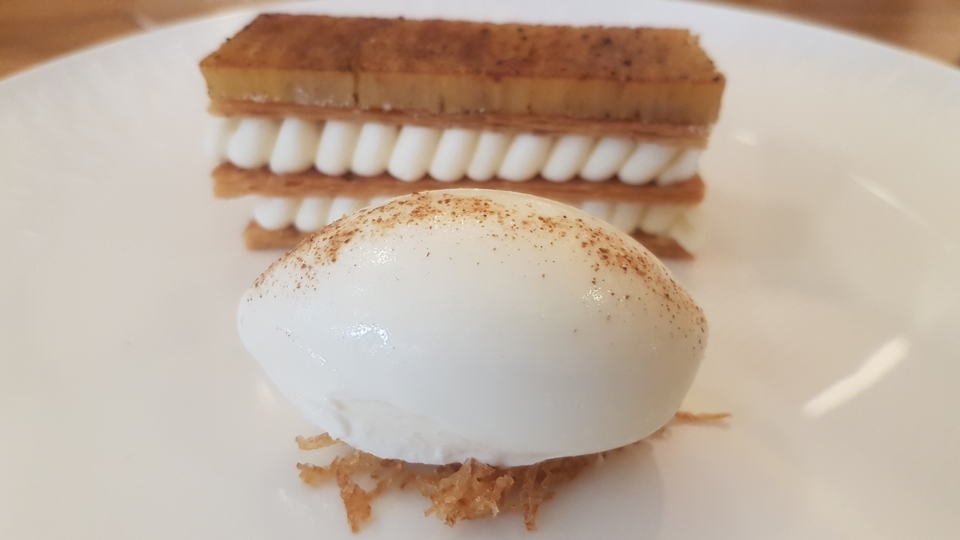 The Hokkaido potato mille-feuille has already become a celebrity dish

The star of the show might well be the already Insta-famous Hokkaido potato mille-feuille with sake and white chocolate mousse and butter and sake gelato. One restaurant review claimed that this is so popular it occasionally sells out, though Bal refuted this. You cannot visit Trivet without sampling this dessert. Bal told me that he was traveling with Lake through Japan a few months ago. They stopped at a Sapporo izakaya (a kind of informal restaurant) and chanced upon their indigenous small, thick-skinned potato loaded with butter. Bal remarked how they hadn’t really come across any potato dishes during their trip, and set about incorporating it into a dessert. The result is very individual and has divided restaurant critics, but I loved it. For a start, using potato for the mille–feuille means that is it not loaded with sweetness and/or calories. The trick was to partner it with a brilliant sake and white chocolate mousse that is to die for.

On the other side of the table came a chestnut Mont Blanc flavored with bergamot and vanilla. This was less adventurous than the mille-feuille but no less delicious, offering perfect consistency and sweetness. 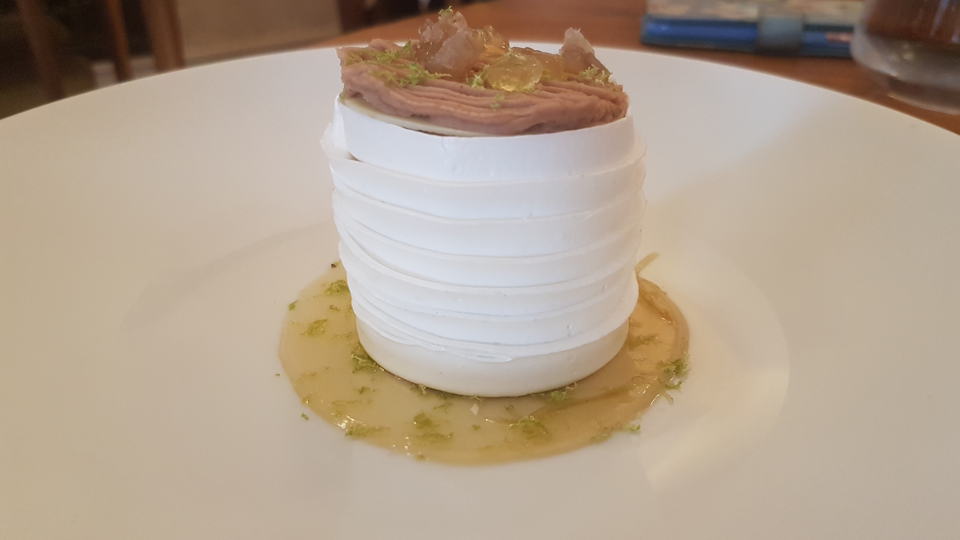 Apropos of the fermented grape juice, rather than opting for a full bottle at lunch, we exploited the fecund list of wines available by the glass. Usually I avoid this, because too many establishments pour fatigued wines from bottles opened God knows when. Isa Bal would never allow this. The wines were as fresh as a daisy, equivalent to how they would taste if consumed from unopened bottles. This meant we could be adventurous in our choices, and so I focused on Greece and Turkey for both white and red.

The 2017 Santorini Assyrtiko from the Artemis Karamolegos Winery was a revelation. Having come off the back of tasting reams of Burgundy whites, this was a timely reminder that (a) you can find equivalents from less coveted regions that offer just as much pleasure and (b) Assyrtiko is sorely underrated. This was full of tension on the nose, quite Chardonnay-like in character, surprisingly reserved at first but opening with aeration. The palate was fresh and vibrant. maintaining superb tension from start to finish, and showing fleeting traces of orange zest and white peach toward the finish. What an outstanding Greek wine! The 2016 Odrycia Narince from the Arcadia Winery in Thrace (Turkey) made a fascinating counterpart. This was about texture: the aromatics were muted at first, and the palate was deep and waxy, revealing a subtle flor-like note toward the finish. But it changed in the glass, developing much more fruité on the nose (dried apricot, kumquat and nectarine) while the palate gained more and more tension with aeration. I have little experience of Turkish whites, but this was sublime. 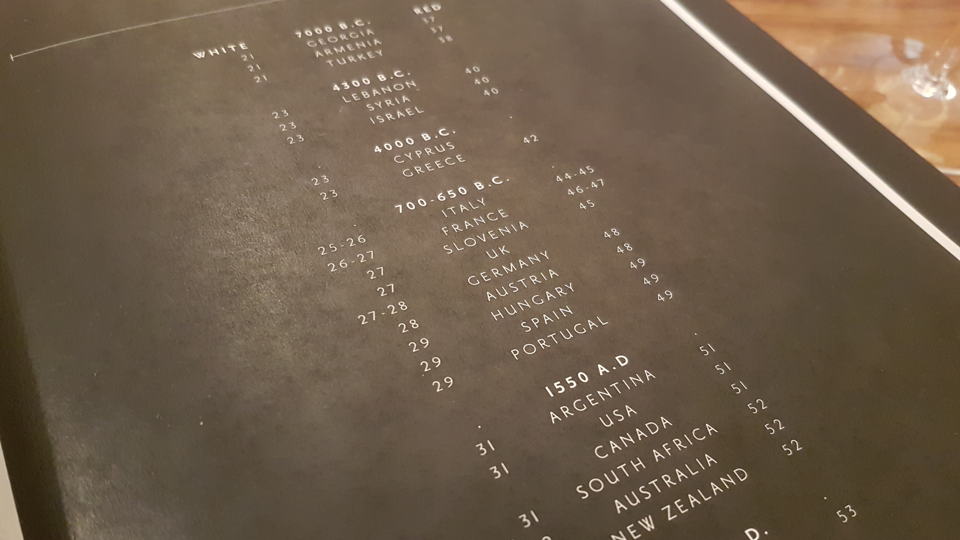 Moving on to the reds, the 2016 Kavaklidere Prestige from Kalecik Karasi in Central Anatolia was open-knit and redolent of a Châteauneuf-du-Pape on the nose, which was a bit soft and gamy, and just missing a little tension. The palate displayed fine depth and plenty of flesh, coming across a little animally in personality, with perhaps just a hint of brettanomyces on the finish. Nevertheless, it was still enjoyable. The 2011 Goumenissa from Domaine Tatsis was the better of the two. Despite eight years in bottle, this blend of Xinomavro and Negoska sported a lovely blackberry, raspberry and cedar-scented nose not unlike a Haut-Médoc of similar age. The palate was quite structured and grippy at the beginning, but it softened with aeration, revealing fine balance and sappy red fruit on the finish. This was very impressive.

I asked Bal to recommend two sweet wines by the glass to accompany our desserts. The 2017 Costat Darrèr “Les Grains des Copains” Jurançon from Jean Marc Grussaute, a blend of 80% Petit Manseng and 20% Gros Manseng, was endowed with attractive dried apricot, quince, lanolin and peach on a nose full of tension and focus, while the palate was well balanced with a fine bead of acidity, Barsac-like in some ways, and a fresh, persistent finish. The Japanese sake, Tedorigawa Yamahai Junmai, comes from the Ishikawa region and was served at room temperature. It had a potent, beautifully defined bouquet of grilled hazelnuts mixed with macadamia, dried honey and a steaming bowl of rice. I was not quite as taken with the palate, which was just a little too oxidative for my liking, but I appreciated the tangy sharpness and the nutty/smoky finish. 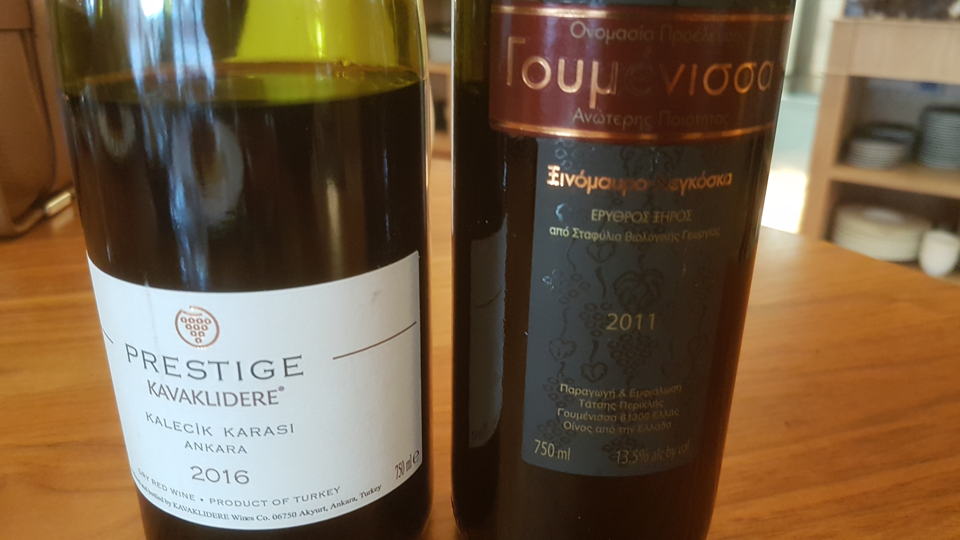 The two reds from Turkey and Greece made interesting comparisons

Trivet offers dishes that are not designed to show off or dazzle. They initially appear simple, but when examined close up, they are much more nuanced than the rather laconic menu suggests. Trivet clearly has ambitions, but unlike Core, its approach is more straightforward, remaining faithful to the idea of a three-course lunch or dinner without the frills and theatrics. There are no amuse-bouches or pre-desserts. I like that. I came away without feeling bloated and having eaten healthily. There is a personal touch that I like at Trivet, in terms of both Lake’s menu and Bal’s choice of wine. It’s their restaurant, and they stamp their personalities and their experiences upon it. Let’s be frank – it is not cheap. At £38.00 for the most expensive main course, you can easily run up a two-ton bill without splashing out on the wine. Then again, there are so many reasonably priced bottles that wine-lovers will come away satisfied and feeling it is money well spent. The standard of service was exemplary, as you would expect from two seasoned former employees of The Fat Duck. The ambiance is casual, fitting with London’s move away from formal dining. Isa Bal candidly remarked that they have no desire to rush things and their desire is to build the restaurant gradually. The more I reflected upon Trivet, the more I liked it. Moreover, I think it’s going to get even better. If you seek a restaurant with cuisine from the top drawer, without fuss and ostentatiousness, and an eclectic wine list not intent on gouging you for every penny, then Trivet comes recommended.

“Has Heston Blumenthal been here yet?” I asked before leaving. “Not yet,” Isa replied. When he does come, I am sure he will enjoy the experience.