John Kongsgaard had his Syrah epiphany in France. Kongsgaard, who first gained renown for the Chardonnays he made for Newton Winery in the early 1980s, and subsequently for his Merlots and Cabernets, visited Condrieu in 1986 with Peter Newton, who was very interested in Viognier. On the trip, Kongsgaard discovered Côte-Rôtie and got the bug for Syrah in an Old World style. “Before that I was a Bordeaux guy, but I was awestruck by the northern Rhône, especially Côte-Rôtie,” Kongsgaard told me during an epic vertical tasting of his Syrah in March. “I had tasted Syrahs from Australia and California, but the super-fruity version wasn’t so interesting to me. I gravitated to the northern Rhône’s leaner, minerally, energetic wines that were more about soil than fruit.”

Kongsgaard had worked with Lee Hudson ever since this outstanding Carneros grower started planting vines at the beginning of the ‘80s, but his involvement had been with Chardonnay and Bordeaux selections. (Kongsgaard purchased Hudson Chardonnay fruit for Newton in 1983, the first commercial vintage for Hudson.) But Hudson had also planted some Syrah vines at the outset and Kongsgaard bought two tons of Syrah fruit from Hudson’s Q block in 1996 and launched his own label. (That same year Kongsgaard and his partner Fritz Hatton established Arietta. Kongsgaard eventually sold his share of Arietta to Hatton in 2005, so that he could construct a winery and expand his eponymous label.) 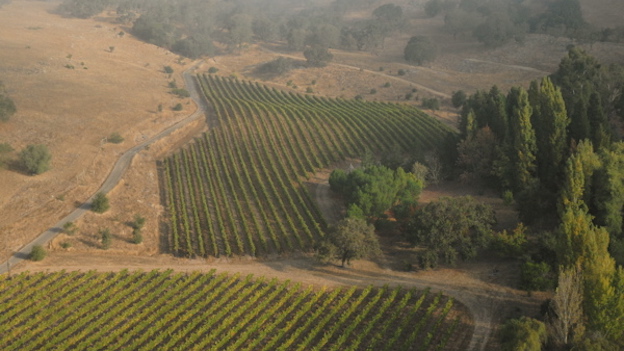 Q Block - The Source for the Syrah Hudson Vineyard

From 1996 through 2000 Kongsgaard bought two tons of Syrah fruit annually, but after Jade Mountain, another client of Hudson’s, was sold, Kongsgaard was able to get all five tons of fruit from this 2-1/2-acre, southwest-facing hillside site, which Kongsgaard describes as “one of the rare instances in Carneros where the volcanics are on the surface.” Carneros, he explained, normally features ocean deposits of shale and clay from 20 million years ago. But during the volcanic period 6 million years ago, there were vents in the ground through which ash and lava flowed out. “So we have a very interesting combination of mineral content and cool conditions near San Pablo Bay,” he summarized.

The distinctiveness of the site, in conjunction with low crop levels and Kongsgaard’s minimal-intervention winemaking, has produced what is arguably California’s greatest single Syrah bottling. When the 1996 was released, it was also the most expensive Syrah in California—and intentionally so. “We didn’t want to make Syrah unless we could compete at the world level, just as with Cabernet Sauvignon in Napa Valley,” Kongsgaard explained.

Harvesting strategy and vinification have been steady from the start. Kongsgaard normally picks his Syrah at the end of September, in most cases in a single day. Potential alcohol levels in the grapes are normally within a fairly narrow range. “The fruit is typically herbal, grassy and green well into September but suddenly, at 24 or 25 or 26 degrees Brix, it goes from tasting like a vegetable to tasting fruity. It begins to show an almost dessert-like character. And that always happens at a high pH [typically between 3.75 and 3.9 in the finished wine].” 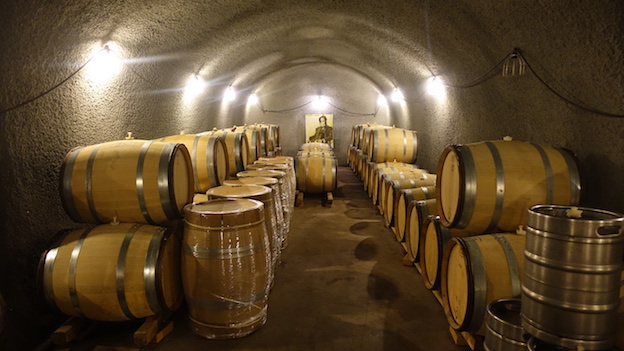 As the fruit comes in cold from the vineyard it normally takes four or five days to start fermenting with its indigenous yeasts. Kongsgaard describes his vinification as “fairly northern Rhône from the start,” noting that he “makes wine against the fruit.” He begins by destemming the grapes, explaining that “our wine is already peppery enough, with good color stability, and sufficiently tannic without the stems.” Total cuvaison time during the “medium-hot” fermentation is about three weeks, with two pumpovers per day at the beginning of the fermentation, then one a day for the second part of the process. “Then we simply keep the cap wet during seven days of post-fermentation maceration,” he noted. “There are never problems with the fermentation of Syrah and we always finish by Thanksgiving.” The wine spends about 20 months in 50%-new French oak barrels, mostly supplied by François Frères and Billon.

Of that first Kongsgaard Syrah from 1996, not a bottle remains. And the wine was not sold commercially in 1997, so my otherwise comprehensive tasting began with the 1998 release. Nowadays Kongsgaard normally has about 15 barrels of Syrah—with vine yields typically under two tons per acre. But in 2015 there were only eight barrels of wine, and in 2011, the only growing season that suffered from rot problems, Kongsgaard ended up making just four barrels of wine. Alcohol levels are virtually always between 14.5% and 16% alcohol and Kongsgaard has never acidified his Syrah. As a rule, the wines show excellent freshness and energy, which Kongsgaard attributes largely to the natural lift provided by the rocky soil. “The sparky, flinty minerality in the wine definitely comes from the vineyard,” he told me.

In the early years, Kongsgaard racked the wine twice, plus a third time for the bottling, which is done without fining or filtration, but nowadays he does four total rackings. He explained: “We discovered that the wines prior to 2006 needed 6 to 24 hours of decanting, so we thought we were cheating the wine buyer by not racking more.” 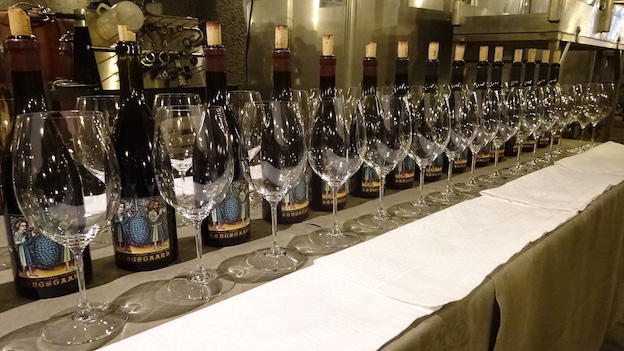 I tasted these exciting wines with Kongsgaard in his cave cut into volcanic rock at his home on Atlas Peak. While they are indeed “minerally, energetic wines . . . more about soil than fruit,” consistent with Kongsgaard’s objective, they are also wonderfully rich and complex, and are evolving at a deliciously slow pace.

Multimedia: John Kongsgaard on His Syrah, Stephen Tanzer, May 2016