As I have written many times before, I grew up in a family that rarely ventured outside English cuisine. I could have gone to prison and eaten better. If a dish had not been served at King Arthur’s (round) table, then my family would shun it as “foreign.” Thinking back, the first “exotic” food I ever ate was Chinese. No, it was not a Manchurian feast, just a mundane paper bag of sweet-and-sour pork balls. But they were so scrumptious that they instantly put this crazy idea in my head: maybe… just maybe… there was more to food than gammon and chips. Years later, I often attended wine tastings held at the Royal Horticultural Halls in Victoria, central London. If I was feeling peckish, I would pop into a very good Chinese restaurant nearby. It was called A Wong. I would sit at the counter and order whatever sounded appetizing. Trust me, it all tasted better than those sweet-and-sour pork balls. 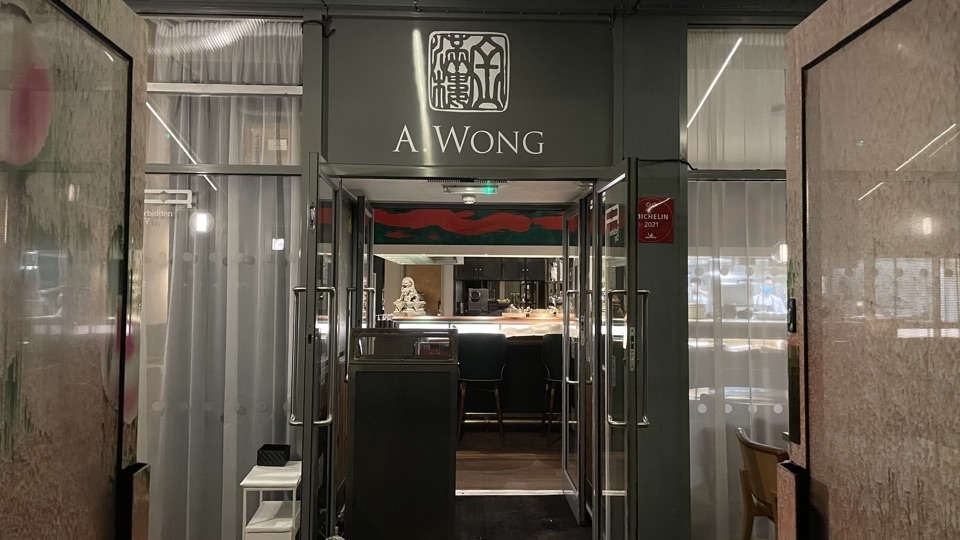 A Wong subsequently became one of the country’s most lauded Chinese restaurants, with two Michelin stars to its name. There’s now a long waiting list to experience Andrew Wong’s cooking. It was not a given that Wong would take over his parents’ restaurant, Kyms, after studying anthropology at LSE, but a tour of Chinese regions and their cuisine inspired him to don his apron and rebrand Kyms in December 2012. 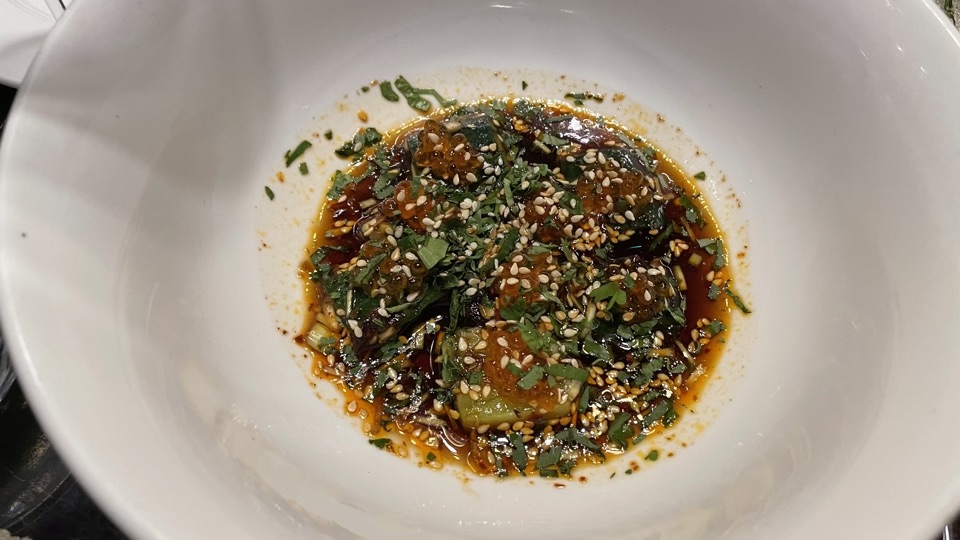 Having not dined at A Wong for a while due to the pandemic, I was eager to return. So when a friend came over from the other side of the pond last August, I joined a small gathering. The restaurant is still located just a five-minute walk from Victoria Station (and two doors down from my restaurant of 2021, Lorne). The front was crowded with al fresco diners under patio heaters. The interior is split between a ground floor with the kitchen counter and a basement where we ate; both were absolutely jammed with patrons on a weekday night. The wine list is actually quite extensive and reasonably priced, though we negotiated corkage on some special bottles that I will broach later. We opted for the “Taste of China” menu, designed to be a culinary and historical tour of a cuisine that has evolved over 4,000 years, and let the kitchen choose the dishes. The plates came out in such a flurry that it was almost impossible to keep up, and therefore, I have just noted some of the highlights. 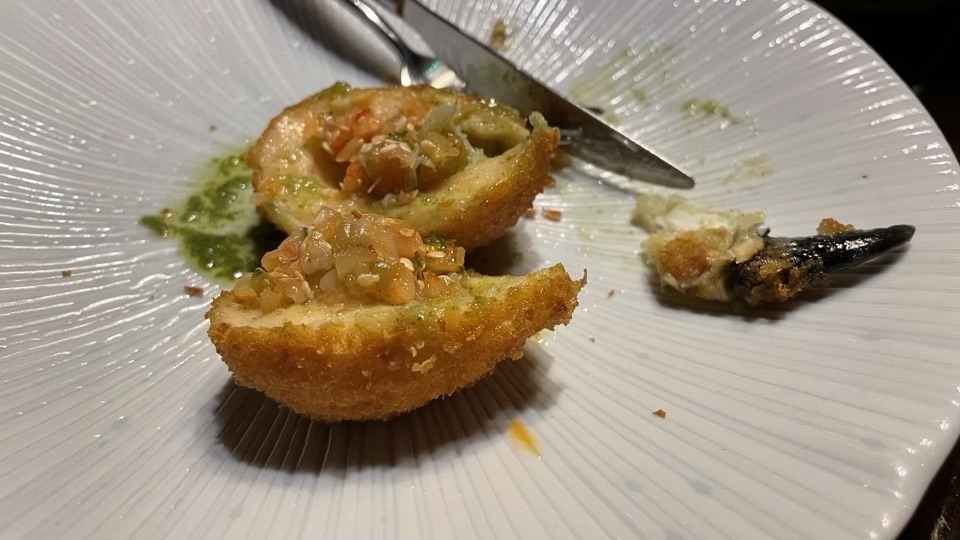 Firstly, the chilled “smacked” cucumber with trout roe, chilli and garlic vinegar was a judiciously spiced dish that slapped you round the cheeks. As an opening “pay attention” dish, it worked a treat, and though on paper it should have killed the two Rieslings from Klaus-Peter Keller, they were a perfect match.

The crab claw with cured scallop and wasabi was perfectly seasoned, the wasabi thankfully not excessive and complemented the delicate crab flavors. 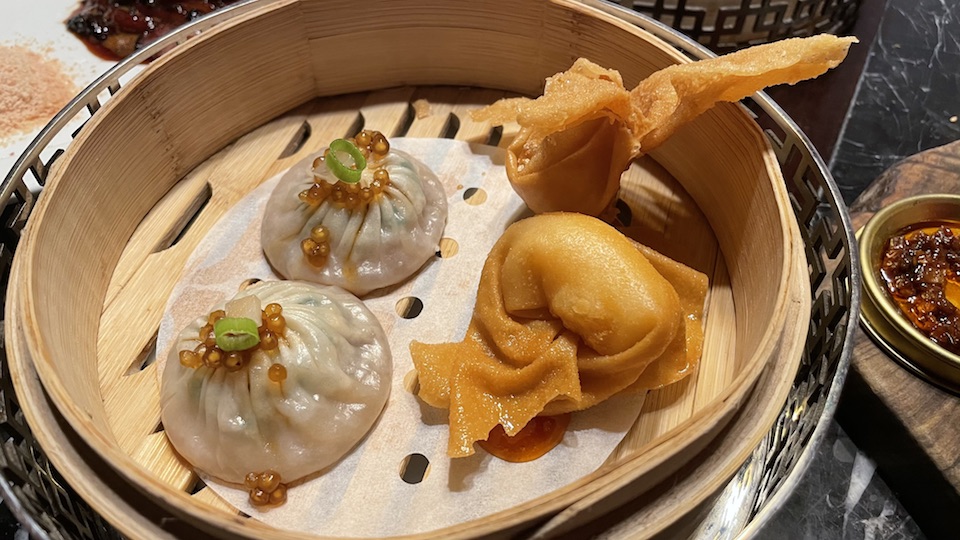 The dim sum baskets were nuanced, with a gooey glutinous texture, utilizing salmon roe or shiso leaf to lend salinity and a little fire, respectively. 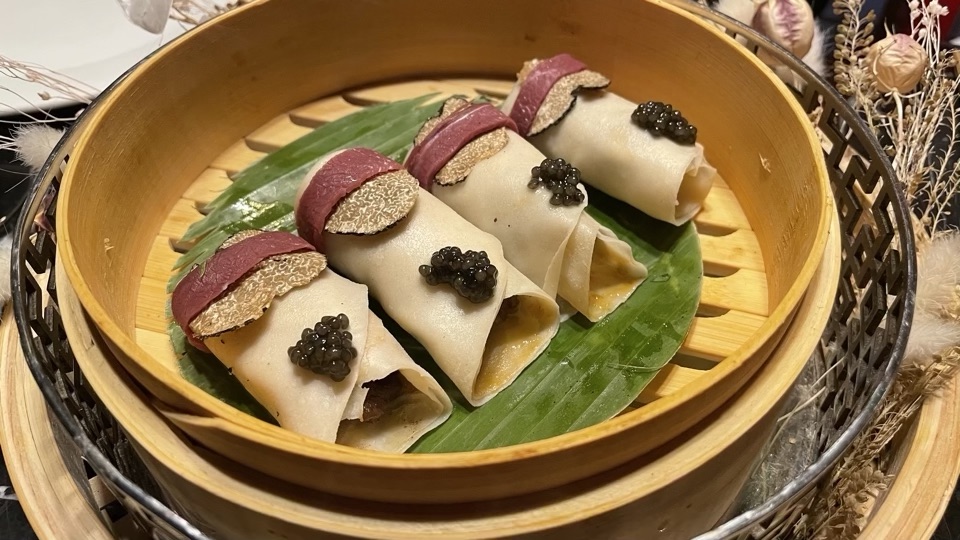 One of the best dishes were these cherry-smoked Peking duck wraps, served with black truffle and a dollop of Oscietra caviar. 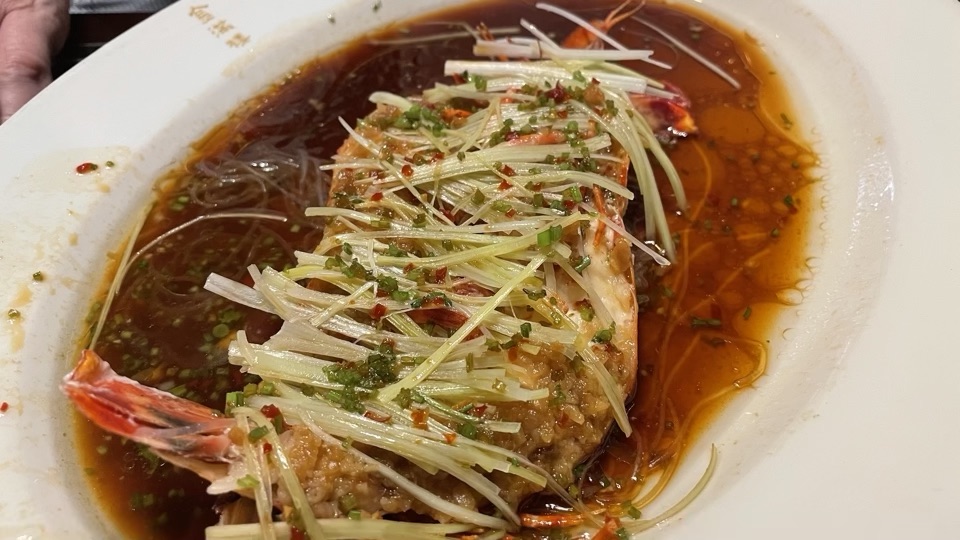 The garlic-steamed wild tiger prawns with mung bean noodles and superior soy were packed full of flavor. Perhaps here I might have dialed down the chillies a little, but there was no denying that the magnificent tiger prawns were cooked to perfection. 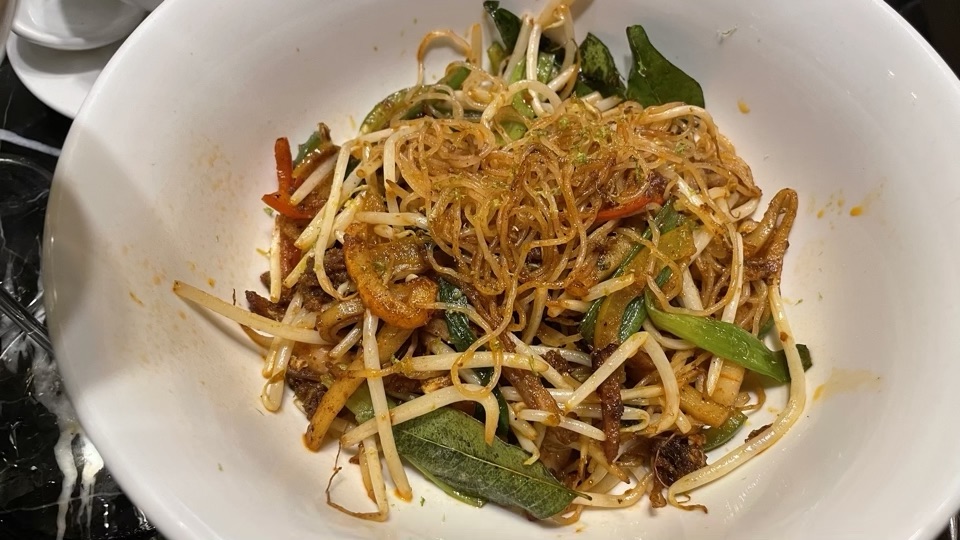 The steamed rice and rice noodles with dried scallop vinaigrette were delicious, although they missed the complexity and “wow factor” of the other dishes. 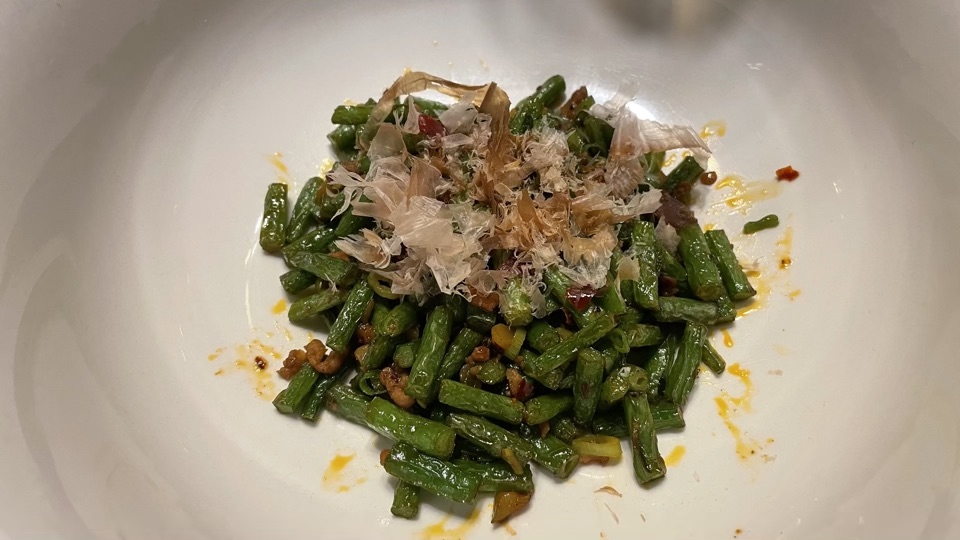 The dried fried French beans with minced pork and dried shrimp were an interesting  combination that worked well.

The dessert of coconut water ice, bird’s nest and fermented coconut with mulberries, yogurt and mochi was a spectacular finale, immediately refreshing the senses. The sweetness of the coconut counterbalanced the acidity lent by the mulberries.

Our group assembled a fascinating and quite eclectic array of bottles. Interestingly, they leant more toward white than red, and indeed, I feel that white wines marry better with Chinese cuisine, avoiding a clash between tannins and sauces. 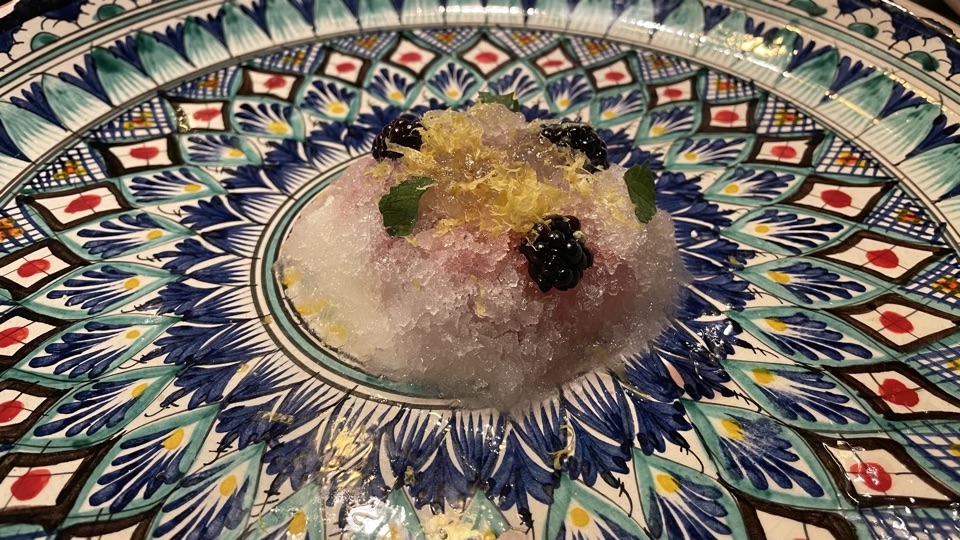 We kicked off with two bottles from Klaus-Peter Keller. The 2011 Westhofener Kirchspiel Riesling Grosses Gewachs possesses a fragrant nose of orange blossom and even light mango scents, assiduously reduced, though that reduction ebbs with aeration. The utterly harmonious palate has superb weight and gravity, with veins of acacia honey furnishing the finish. This is absolutely divine, a Riesling that just wants to sate the senses and does so with effortless ease. Riding shotgun, the 2011 Westhofener Brunnenhauschen Abtserde Riesling Grosses Gewachs is a completely different wine. This is razor-sharp on the Zen-like nose of Granny Smith apples, struck flint notes and citrus peel; you could almost describe it as uncompromising. The palate has a citric spine and tastes quite saline, with hints of orange peel. Harmonious, penetrating and ethereal, this is a brilliant Riesling from Keller, but one that you have to meet on its own terms. This pair was partnered by a 2019 Schloss Johannisberger Riesling Spätlese Grünlack, from the historic Rheingau estate. It is clearly very primal on the nose, offering fragrant scents of pineapple, quince and a light Muscat-like aroma. The palate is well balanced with a fine spine of acidity, not overly complex yet texturally satisfying. There’s good substance on the finish and melon and tinned white peaches on the aftertaste. This is a wine I would cellar away for three or four years. 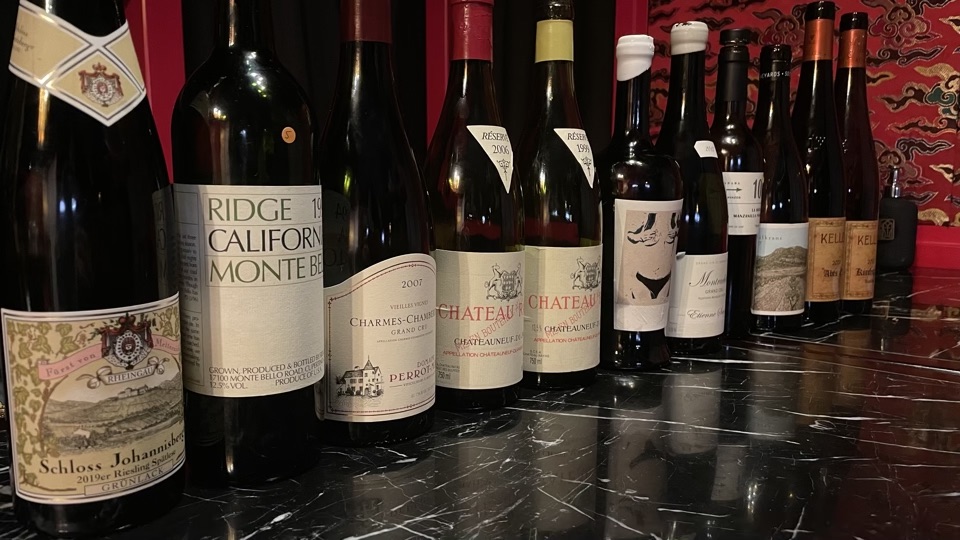 We then journeyed to the Southern Hemisphere courtesy of a 2017 Huilkrans from Alheit Vineyards in South Africa. Probably the most inexpensive bottle of the evening, it more than held its own against prestigious company. The nose has closed up a little since I last tasted it, but with coaxing, it offers gorgeous dried honey, fennel and dill aromas; a subtle basalt note emerges with time. The palate is tensile right from the start, offering hints of honeysuckle and crushed rock, delicate stem ginger and chai notes toward the finish, which lingers in the mouth. This is a profound Chenin Blanc from winemaker Chris Alheit. The 1999 Châteauneuf-du-Pape Réserve Blanc from Château Rayas has a lucid straw hue. Scents of dried honey intermingling with tangerines, licorice, aniseed and desiccated orange peel form the complex nose. The palate is dense and weighty in the mouth – what you might call a “white wine with tannins.” Underpinned by a fine line of acidity, this has an almost Alsace-like sweetness, revealing dried pineapple and tangy clementines toward the slightly waxy-textured finish. Mercurial in the glass, it seems to change with every passing minute. A stupendous Rayas at the peak of its powers.

Two more whites, albeit very different in style, completed the lineup. The 2015 White Wine Entre Chien et Loup from Sine Qua Non, a blend of 40% Chardonnay, 40% Roussanne, 8% Petite Manseng and 2% Viognier, has an enticing nose that expresses the Roussanne with style. Exuberant scents of apricot, kerosene, chamomile and chai blossom from the nose. The palate is intense but balanced and perfectly controlled, quite spicy with grilled walnuts and smoke, and sports fantastic definition on the persistent finish. I am not familiar with Manfred Krankl’s whites (we don’t see them much on these shores), but this bottle made me want to investigate further. The 2015 Montrachet Grand Cru from Etienne Sauzet is just missing a little delineation and precision on the nose, where the oak barrels are too vocal, drowning out the terroir expression you want from a Montrachet. The palate is better, with wonderful balance and fine concentration, though it does not quite deliver the mineralité or tension I seek on the finish. I wonder where this will go in the future. 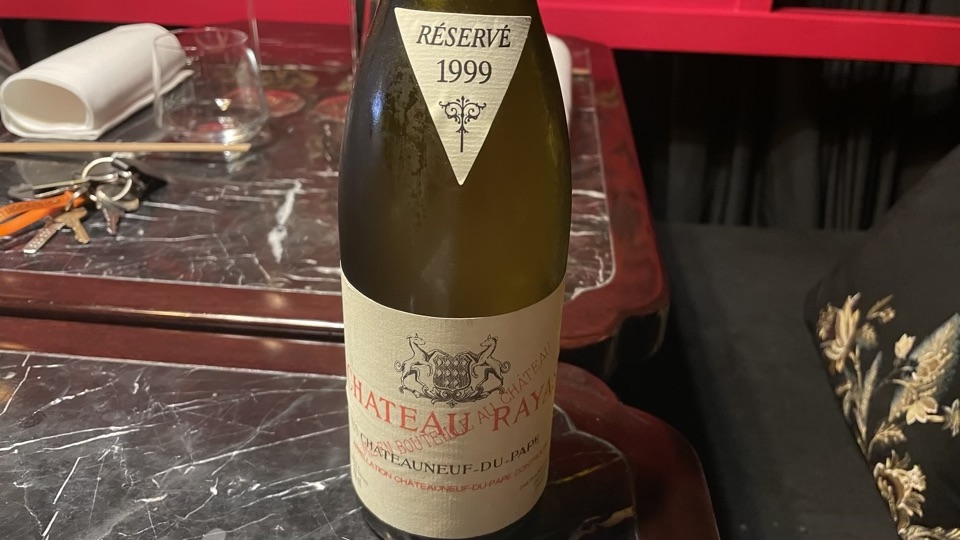 Separating the whites and reds was the La Bota da Manzanilla Pasada 100 from Equipo Navazos. Sherry is rarely served in the middle of a meal, yet I find the acidity and oxidative notes a perfect palate cleanser. According to the Equipo Navazos website, this October 2020 bottling was made using barrels with a higher-than-usual fill, above the normal five-sixths level, thereby dialing down the influence of the flor. It has an explosive bouquet of grilled walnuts, hazelnuts, brine, singed hay and yes, subtle flor-like aromas, less pronounced compared to other bottlings I have had from Navazos. The palate is arresting and very nutty, with cutting acidity and such a saline finish that you want to go out with a bucket and spade and build a sandcastle. Brilliant.

There were just three reds, probably because we felt that whites tend to match Chinese cuisine better. The 1994 Monte Bello from Ridge Vineyards showed well with its old-school nose of mulberry, eucalyptus and touches of truffle, shoe leather notes emerging with time. The palate is beautifully balanced and refined, with candied red fruit, though a touch of dryness on the finish suggests it will not improve with bottle age. On the other hand, I cannot see any rapid decline based on this example, though it is not the best Monte Bello I have tasted and was trounced by the superlative 1991 I encountered just a month later. The 2007 Charmes-Chambertin Grand Cru from Domaine Perrot-Minot offered red cherries, iodine and inkwell scents on the nose, perhaps not quite as delineated as Perrot-Minot’s current releases. The palate is built around a sweet core of morello and raspberry preserves and hints of cassis. The confit-like finish intimates that a slightly earlier picking might have been beneficial. Still, this is drinking perfectly now, though I would not keep it more than four or five years. Finally, there was the 2006 Châteauneuf-du-Pape from Château Rayas. This rather overshadowed the preceding Burgundy with its flattering scents of crushed strawberry, ripe clementines and incense, light leathery notes emerging with time. The palate is elegant and refined, one of the most transparent Rayas reds that I have encountered, leading to a persistent, licorice-tinged finish. This is a wonderful, refined Rayas, probably at its peak. 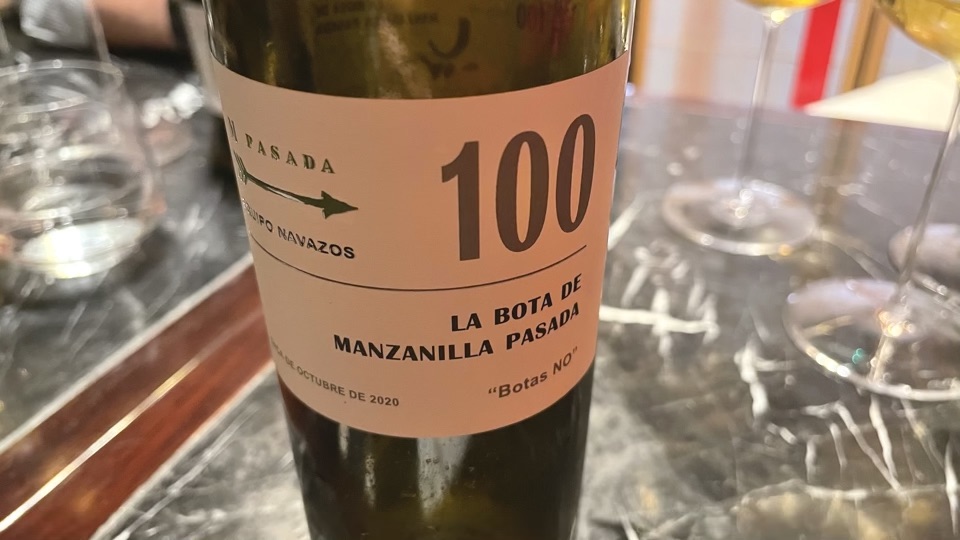 I apologize for not providing a more comprehensive description of our dinner dishes. I contacted A Wong to ask if they could elaborate on their sourcing and ingredients, but unfortunately a reply was not forthcoming. Overall, A Wong provided an impressive multi-course feast. That said, this is not an inexpensive menu, and looking it back, it didn’t blow me away. I cannot point to a singular astonishing dish that left me desperate to return. Oddly enough, I did experience exactly that feeling when I used to order one or two things at the counter back in the old days. It’s possible that the intensity of flavors was overwhelming, the nuances canceling each other out; it can happen. Perhaps the meal would have been more satisfying with fewer dishes. I will return to A Wong at a later date, hopefully after a tasting at the Royal Horticultural Halls when they recommence post-pandemic. Who knows – maybe there’ll be sweet-and-sour pork balls on the menu.