An Unforgettable Charity Dinner at Saison

Saison Reserve Caviar; white sturgeon caviar, warmed by the fire in a packet of giant kelp, served on a bed of spinach poached in seaweed butter

Striped Horse Mackerel; sashimi with a broth of rose and verbena

Local Spot Prawn; cooked live over the fire, a sauce of salted peach and sudachi

Black Cod; line-caught and cured over kelp, served with a sauce of yogurt and citrus leaves

A broth of grilled mushrooms

Squash; cooked above the fire

Raspberries dressed in their own juices 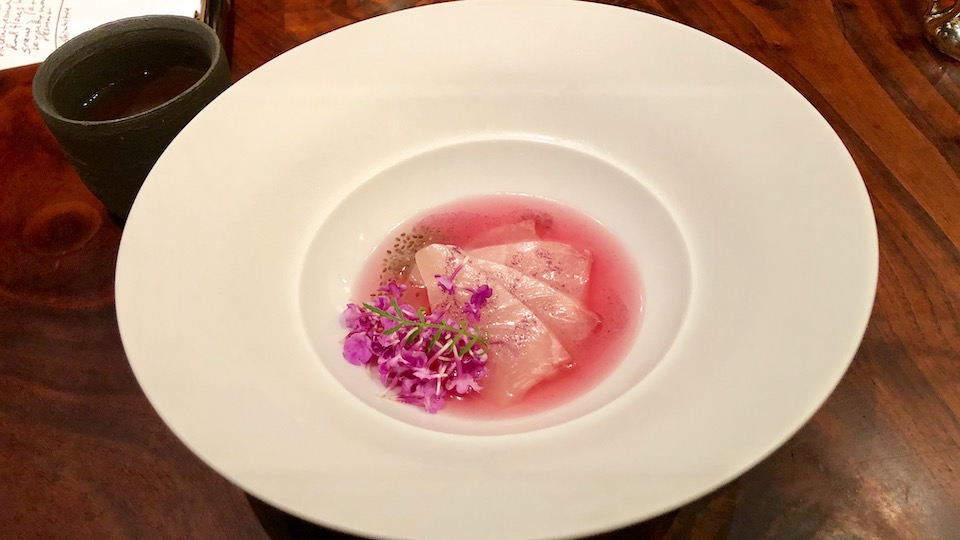 Striped horse mackerel; sashimi with a broth of rose and verbena

In many ways, this article is a companion piece to a review we published recently of a Saison dinner from last year. I wanted to publish the two together because they really cover two eras in the restaurant’s history. Chef Laurent Gras joined Saison in mid-2018, and brought much needed breath of fresh air to the restaurant. Not that Josh Skenes' food wasn’t fabulous before, it was, but the menus tended to be repetitive. Some of this is understandable because diners are often disappointed when they don’t find the signature dishes at destination restaurants. At the same time, a balance between the tried and true classics and newer creations makes return visits much more fun and interesting. On this night, Gras and his team prepared a stunning menu full of highlights. Course after course, the food was just exquisite. 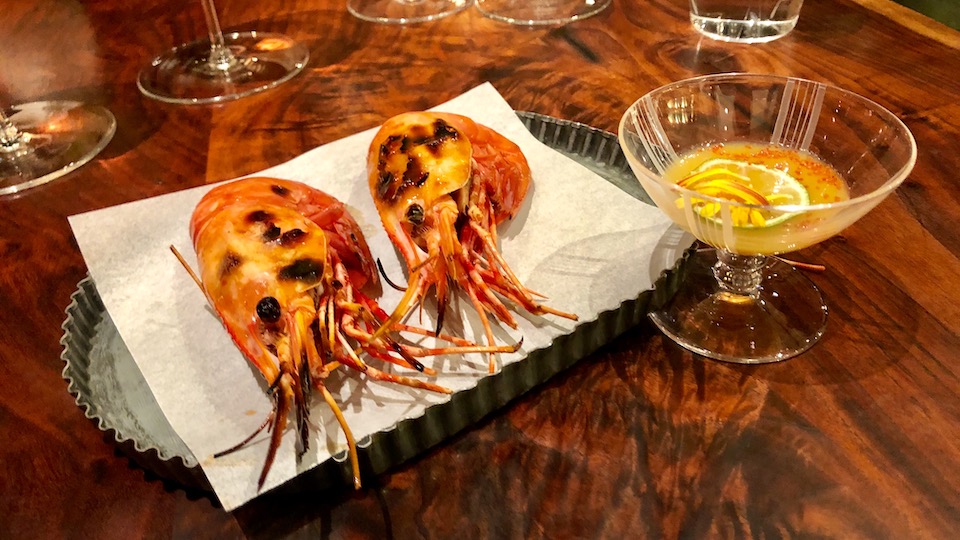 Local spot prawn; cooked live over the fire, a sauce of salted peach and sudachi

The white sturgeon caviar and sea urchin on grilled bread, two Saison classics, were both delicious. I also really enjoyed the striped horse mackerel, which was served in broth of rose and verbena full of floral and bright flavors. The spot prawn, cooked live over the fire, was quite similar to a dish I tasted at Angler, Saison’s new sister restaurant, a few weeks prior. I didn’t mind having it again, as it was sublime. The tomato course, served as three small plates, was captivating for its interplay of intense flavors and textures. I opted to skip red meat on this night. A succession of vegetable courses that followed were all delicious and didn’t make me feel like I was missing anything at all. Desserts were exquisite, as usual. 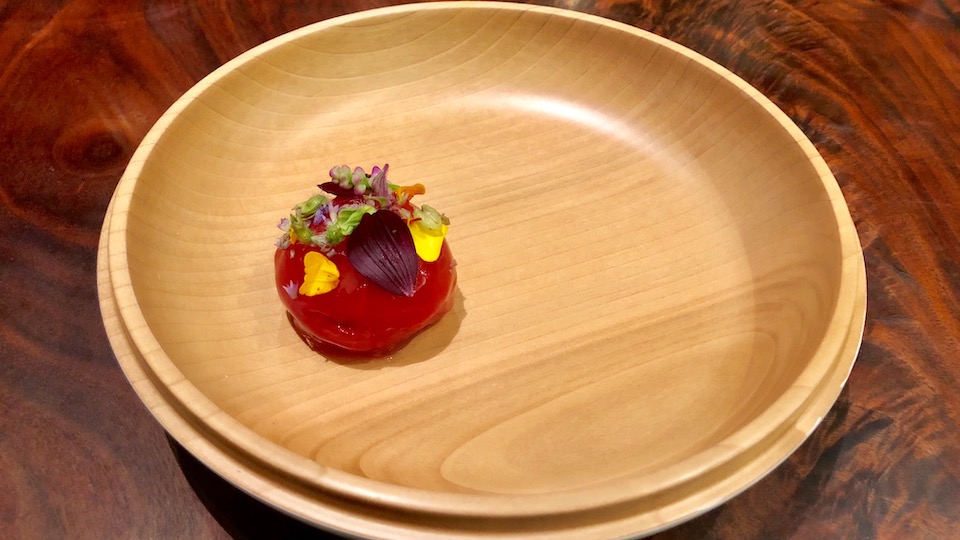 Embered tomato inside another tomato

For the wines, I focused on a selection of bottles I thought would pair well with the food, but I also wanted to balance some more obvious choices – Burgundy and Piedmont in particular – with a dose of Tuscany, Alto Piemonte, under the radar Friulian whites and an impossible to find Champagne from Cédric Bouchard, most of which were unfamiliar to guests. Once again, Wine Director Noah Dranow and his team did a superb job in keeping wine service brisk and attentive, both of which we greatly appreciated.

The 1995 Krug is gorgeous. I chose it because one of my guests loves Krug and I thought the 1995 would have the right amount of complexity to pair beautifully with the smokiness in Saison’s caviar. Although the 1995 Krug is not a truly epic wine, it is in a sweet spot right now and it works perfectly with our first course. 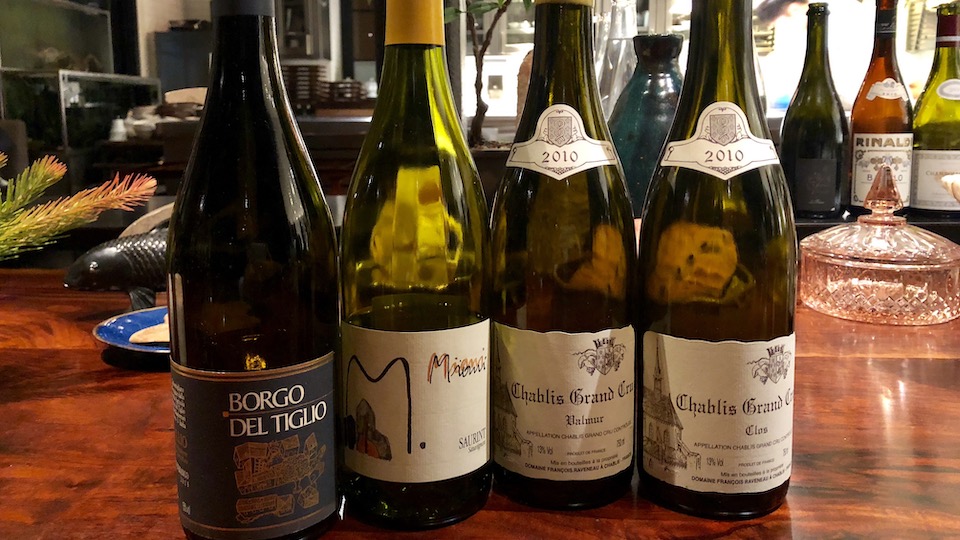 We then moved on to a pair of Chablis from Raveneau. Why not? Here I wanted something luxurious. These two profound Grand Cru Chablis deliver the goods and then some. An utterly mesmerizing wine, the 2010 Chablis Valmur reaches dizzying heights of profoundness, with a stunning interplay of rich fruit and a host of more mineral, slightly reductive overtones that form a fabric of exquisite beauty. Time only does wonders for the 2010, a wine of simply extraordinary beauty, but its most satisfying moment arrives next to the embered tomato inside another tomato, where the explosion of aromas, flavors and textures is simply breathtaking. The 2010 Valmur was a last-minute replacement for an awkward 2004 Dauvissat Clos that I wanted to serve next to the 2010 Raveneau Clos, but in the end it all worked out well. Speaking of the 2010 Chablis Clos, it is stunning, just a little less stunning than the Valmur. I usually prefer the Clos to the Valmur, but on this night the Clos is a bit elusive. I am also taken aback by the wine’s exoticism and textural unctuousness, qualities I would have expected to see more in the Valmur. In fact, I hadn’t seen the bottles myself, I would have sworn the wines were mixed up! Readers fortunate enough to own the 2010 Raveneaus are in for a treat. A few days after this dinner, I opened a 2010 Blanchot, which I then forgot about for a few days. I was shocked to see how gorgeous that wine was after having been left open in a refrigerator for three days!

We then moved into two Friulian whites, which I chose because I expected my guests would not be familiar with them, and I thought they would work well with the food. Borgo del Tiglio’s 2013 Studio di Bianco, a blend of Friulano, Sauvignon and Riesling, is silky and gracious, yet also pulsing with understated energy. Orchard and stone fruit flavors, along with floral and minty overtones, make for a wine of total grace. Although the 2013 is not the greatest Studio di Bianco, the wine is very pretty and a really nice departure from Burgundy. The 2015 Sauvignon Saurint from Miani takes things into another dimension with a head spinning mix of soaring varietal notes and striking textural depth. Enveloping and vivid, the Saurint is another wine that leaves a lasting impression on guests. This is an especially fine bottle. 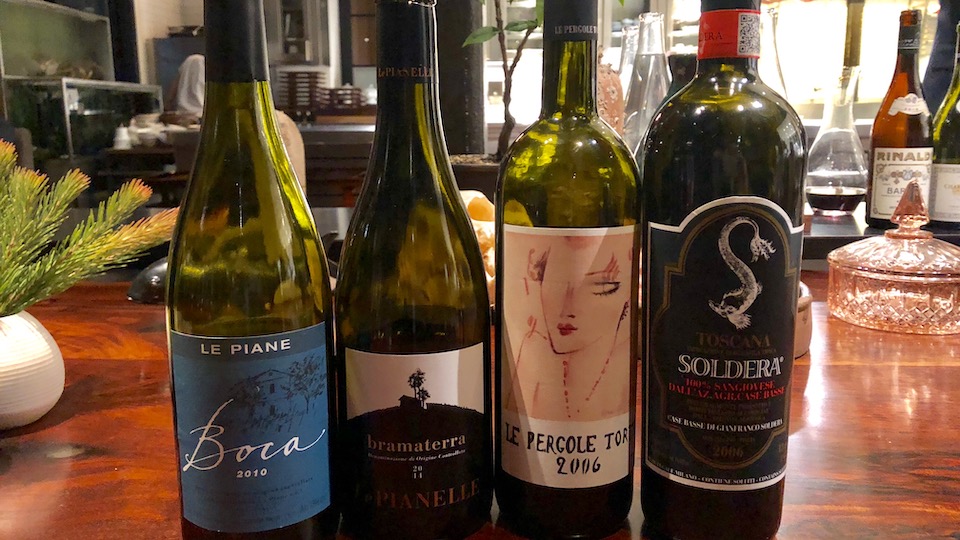 Alto Piemonte is a region I very much believe in. I chose two Nebbiolo-based wines to move into reds, both of which I thought could work well with Saison’s transparent, pure cuisine. The 2010 Boca from Le Piane is absolutely gorgeous, as it always is. Rose petal, lavender and sweet cherry are all beautifully lifted in this slightly nervous, vibrant red. The 2014 Bramaterra from Le Pianelle has shut down quite a bit over the last few months, and yet it offers tremendous persistence. The late harvest yielded a wine with gorgeous ripeness in both flavors and tannins that nevertheless retains the mid-weight, edgy feel that is typical of young reds from this appellation. Both wines need quite a bit of air to be at their best. I thought they showed exceptionally well. 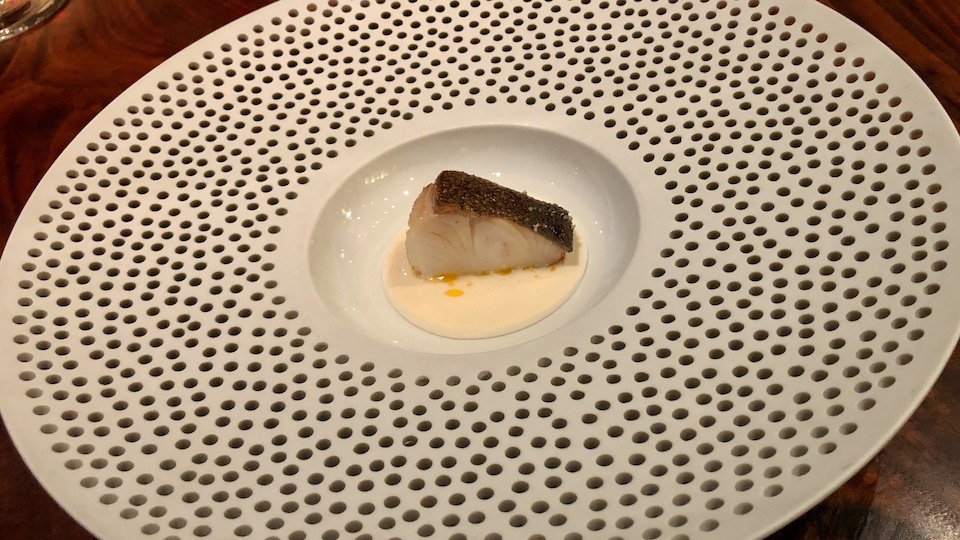 Black Cod; line-caught and cured over kelp, served with a sauce of yogurt and citrus leaves

Next, we move into two pure Sangioveses, both from estates where legendary consultant Giulio Gambelli played an important role. Gianfranco Soldera’s 2006 Sangiovese is the last cask released during a tumultuous period for the estate that saw six vintages of wine in oak destroyed by a disgruntled former employee. Soldera first released his 2006 as a Brunello di Montalcino Riserva, but became so infuriated with his colleague producers in the aftermath of the loss of his wine that he left the appellation and decided to bottle all of his future wines as simply Sangiovese. In the glass, the 2006 Sangiovese is exquisitely perfumed and lifted, with subtle layers of flavor that develop over time, and superb balance. Today, the 2006 is pure finesse. Montevertine’s 2006 Pergole Torte is also 100% Sangiovese, but it emerges from vineyards in Radda in Chianti. The late Sergio Manetti created Pergole Torte at a time when the Chianti Classico regulations dictated that white grapes be part of the blend in Chianti Classico. Manetti created Pergole Torte as one of the first 100% Sangioveses, a wine that at the time had to be declassified to Vino da Tavola, the lowest designation, but it did not formally comply with the regulations of any appellation. Of course, a bevy of pure Sangioveses followed, but Pergole Torte was among the first. It remains one of the great wines of Italy. On this night, the 2006 Pergole Torte is shockingly powerful, dense and structured, with big tannins that give the wine energy and vibrancy. Readers should be in no hurry to open bottles. What a wine!

I often enjoy serving Champagne in the middle of dinner to refresh the palate. Cédric Bouchard’s 2013 Blanc de Blancs La Bolorée does that, and so much more. For starters, the wine is just positively brilliant. Statuesque and enveloping in the glass, the 2013 La Bolorée is a Champagne of pure and exquisite beauty. All of the Bouchard Champagnes are produced in tiny quantities. La Bolorée, an unusual pure Pinot Blanc, is one of the rarest wines in this range. Most people never even see it. And that is why I wanted it for this dinner. In a word: profound. 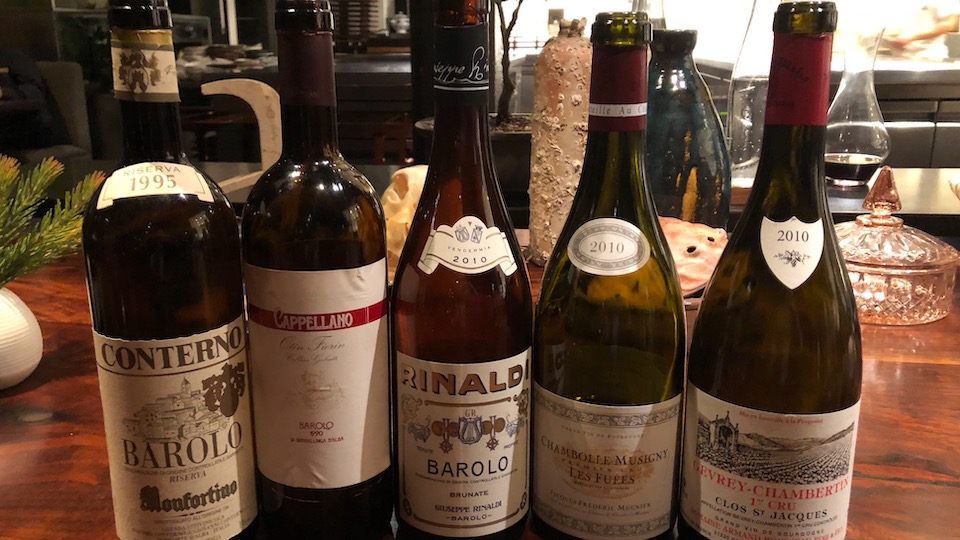 Barolo is next. Cappellano’s 1990 Barolo Collina Gabutti Otin Fiorin is deep, resonant and super-expressive. As good as it is, I have had fresher bottles. The 1995 Conterno Barolo Riserva Monfortino, on the other hand, is simply glorious. From one of the under the radar vintages of the 1990s, the 1995 is going through a brilliant phase today. Scorched earth, leather, tobacco, smoke and dried herbs add myriad layers of nuance to a wine that is old-school Barolo at its best. This is a superb bottle of the 1995. I ask my guests if they would like more Barolo. I am not surprised by the answer. So I share a very special wine, and one I only have a few bottles of. The 2010 Barolo Brunate comes from a small stash I acquired from a collector friend in Italy and is 100% Brunate, as opposed to the commercial release of this wine, which is in reality 85% Brunate and 15% Le Coste. Italian regulations allow producers to blend in fruit from other vineyards (up to 15%) and still list the name of the main vineyard in the label. Don’t ask me why this is. In France, a vineyard designate must be entirely from a single site, but we are in Italy here. As for the wine, itself, the 2010 Barolo Brunate is a towering monument to the glory of Nebbiolo in this magnificent vintage. Although it is naturally very young, the profoundness of the 2010 Brunate requires no real explanation. 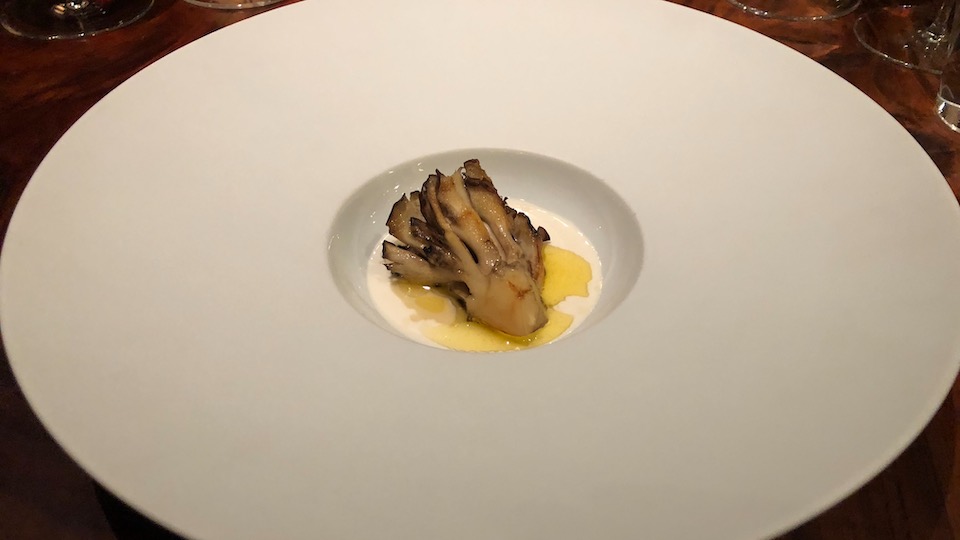 Two fabulous Burgundies bring the evening to a rousing close. The 2010 Chambolle-Musigny Les Fuées from Frédéric Mugnier, is, well, classic Mugnier. Floral, ethereal and lifted, the 2010 is a captivating, hauntingly beautiful wine. The purity of the flavors and textures is utterly mesmerizing. I must confess, I had some misgivings about opening Rousseau’s 2010 Gevrey-Chambertin Clos St. Jacques, as I feared it might not be ready to drink. Those concerns are quickly dispelled as soon as I taste it. From the very beginning, the 2010 Clos St. Jacques is a total stunner. Deep and beautifully layered, with exquisite aromatics and tons of class, the 2010 is one of the wines of the night. Sure, the 2010 will be even better in a few years, or maybe even decades, but it is flat-out gorgeous today. What a wine! 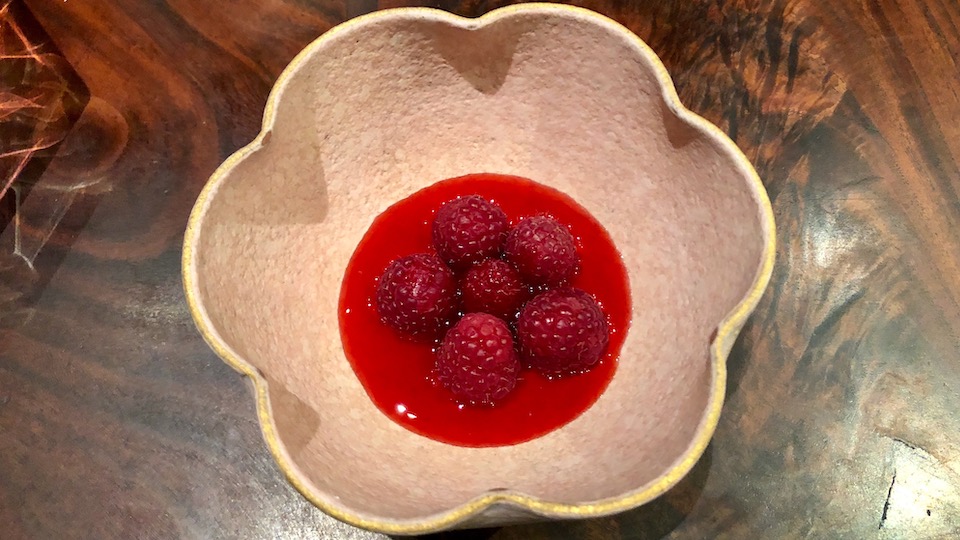 Raspberries dressed in their own juices

The evening winds down as we savor the last drops of these magnificent wines. I would like to thank Saison and our generous donors for making this such a special evening. There are few things in this world that are more heartbreaking than watching a young child waiting for a chemotherapy session. The funds raised at this dinner will go a ways towards easing that suffering for so many families. 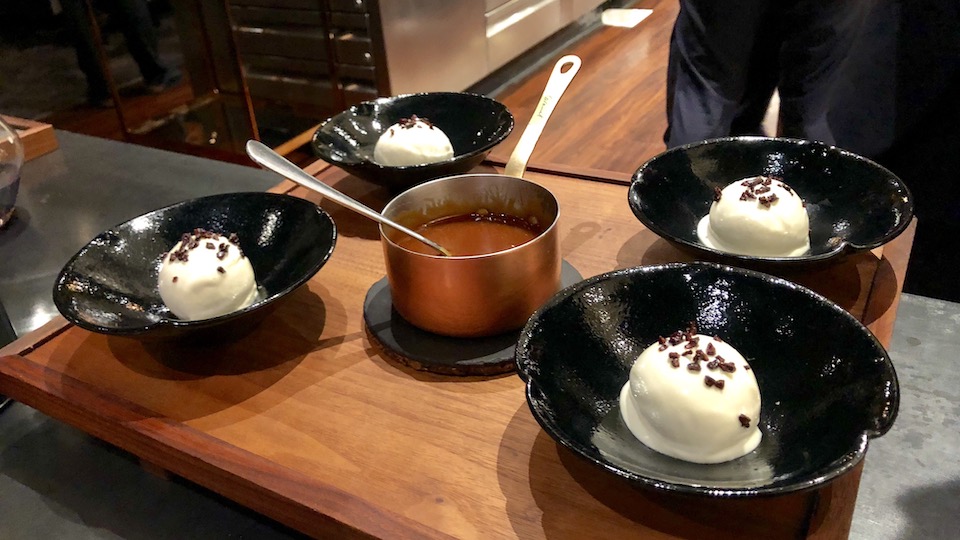