Andrew Edmunds, dressed as usual in navy gilet, chequered shirt and jeans, sits at an outside table chatting away to someone or other. Is he talking food? Perhaps wine? Whatever the subject, he’s gossiping as if there’s no tomorrow. We’ve exchanged small talk over countless pleasurable visits to his eponymous restaurant. Having not entered these doors for an unforgivably long time, not to mention that Edmunds can be a bit of a grumpy old sod at times, I don’t interrupt. There’s always another time.

Andrew Edmunds is a gastronomic institution, one of Soho’s fixture and fittings that has stoically witnessed the churn of media offices, record shops, haberdasheries and dive bars. It has been frequented by London’s ne’er do wells since it opened its doors in 1985. Edmunds himself was an art dealer specialising in 19th and early 20th century cartoons and worked out of an 18th century townhouse, acquiring neighbouring buildings in the 1980s. Auberon Waugh installed a private members club, The Academy, on the first floor, and the bar expanded into a restaurant occupying the ground and basement floor, where the kitchens are housed. Though Edmunds kingdom enlarged, it remains fixed in time, immune to Soho’s inexorable gentrification, a thriving embodiment of its bohemian past. Sure, it’s always looked a bit timeworn with its black window-framed façade and tenebrous interior, tropes more of a country gastropub with its hand-scrawled menus and specials chalked up on a blackboard, tables so close that you can easily eavesdrop on your neighbour, often a journalist or establishment figure. Andrew Edmunds always foments a lively atmosphere, noisy when full and yet intimate, a place to woo your date as I’ve done myself in the past.

Over the years, I frequented Andrew Edmunds as often as humanly possible since it is located a hop, skip and a jump from my former office in Hanover Square, plus I was drawn to its wine list like a dipsomaniacal moth to a flame. Like many oenophiles, I soon cherished this place. There was a period when their comically low-priced 1994 Angélus meant I was there almost every other day. It’s a favourite haunt for the trade, a venue for many a winemaker dinner when Edmunds would join whether invited or not. Indeed, he often sidled up to your table, glass in hand, for a cheeky pour of whatever you had just ordered. That sounds rude, but it was his unwritten prerogative, part of the charm of what one newspaper article recently termed the “Edmunds’ tax”. 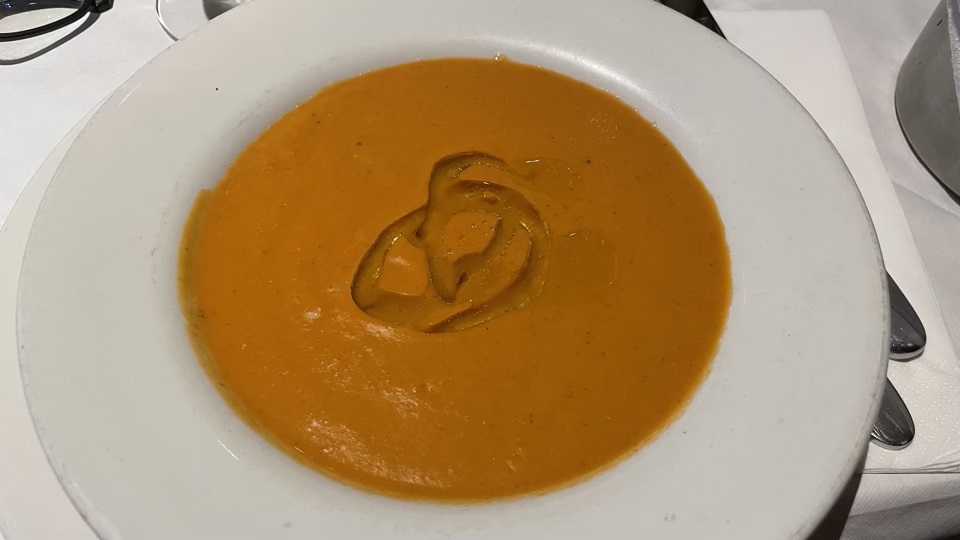 Familiarity breeds complacency. Andrew Edmunds not so much fell off my radar, but I took it for granted, contentedly walk on by or even popped into the bao bar opposite. Therefore, in late June when seeking a venue to meet an old university friend, I decided it was time for a return visit.

The menu has always revolved around European cuisine. Nothing flashy. Nothing froufrou. Yet ingredients are fresh, well-sourced and seasonal, dishes well-cooked. Upmarket tummy fillers! As summer was simmering outside, I opted for a fresh gazpacho, an oft-overlooked starter perfect when the mercury is high. Theirs was a little spicier than others, though refreshing and packed full of flavour. It had just the right consistency, so much so that I could not resist mopping up the remains with any bread to spare. 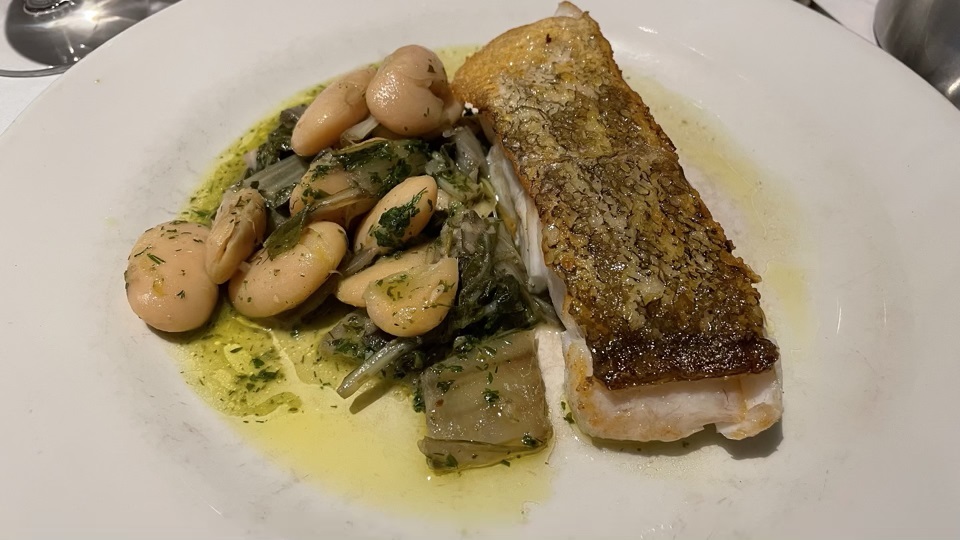 My main was a cod fillet served with butter beans, Swiss chard and salsa verde, again, a dish that offered temporary respite from the heat. The fish was perfectly cooked with a crispy skin and flaky white meat, the humble butter bean a perfect accompaniment and the salsa verde lending that all important bite. 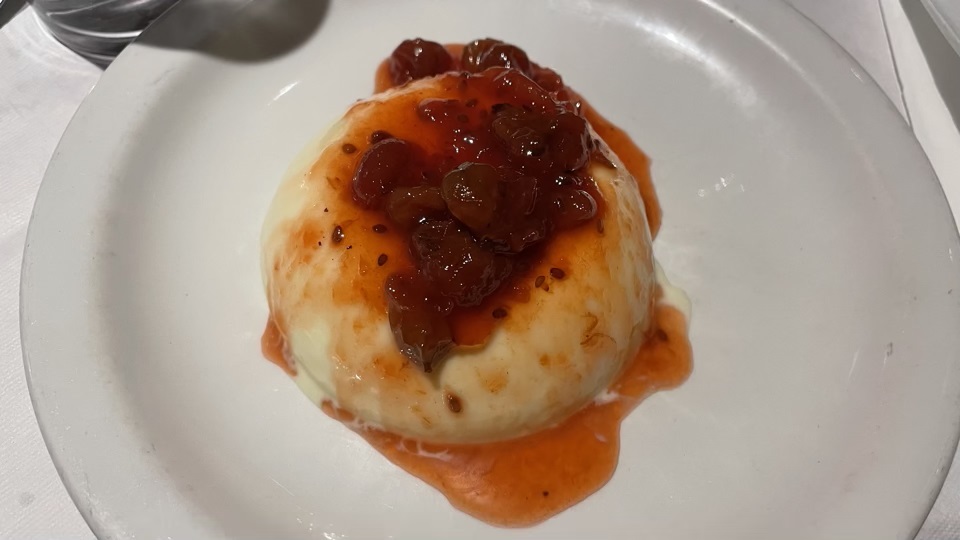 To finish, a raspberry semifreddo. It’s the kind of pudding you dreamed about at school dinners, if only the cook didn’t serve jam roly-poly every day. Light and airy, with a gooey raspberry topping that puts a smile on your face, the semifreddo is terrific.

The wine list has never been hugely expansive but boasts a roster of tempting Bordeaux and Burgundy wines with well-chosen forays elsewhere around the world. My magpie tendencies meant that I always picked off the Burgundies, bottles like Cathiard’s Premier Crus for prices half market values, and not just recent releases, but bottles out of their diapers. 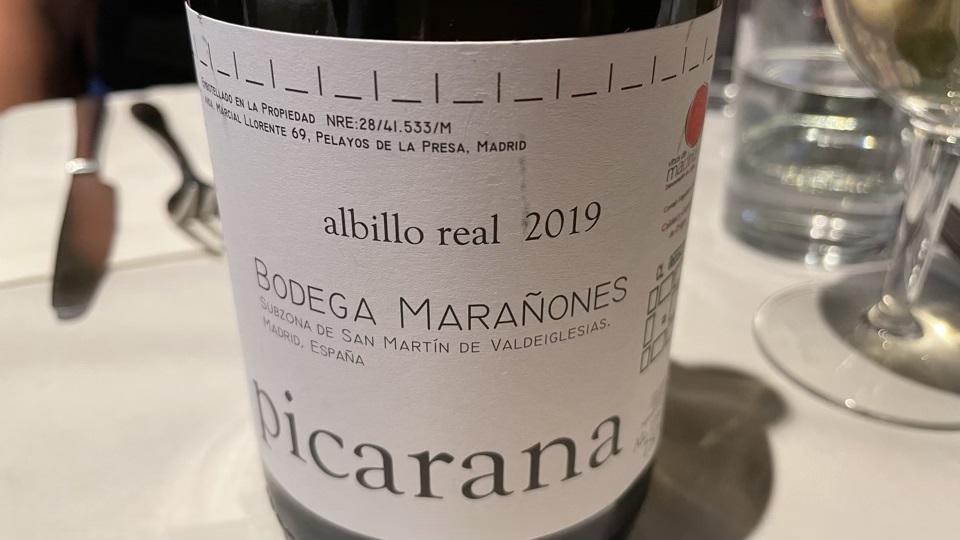 Since I was not inclined to blow the budget, I chose one of Spain’s lesser-known grape white varieties, Albillo, which is always worth looking out for. The 2019 Albillo Real Picarana from Bodega Marañones is from the Vinos de Madrid D.O. The nose doesn’t come galloping out with bags of fruit, rather it unfurls with oily, linseed and jasmine scents that remain “contained”. The palate has a lovely balance, akin to a pithy Chardonnay. With hints of white peach, Golden Delicious and almond towards the finish, this is very pure, understated and more-ish. The NV Pedro Ximénez Sherry El Candado from Valdespino is a guilty pleasure. Heady on the nose, it offers entrancing aromas of kirsch, blood orange, fig jam and Medjool dates that don’t hold back. Likewise, the palate is viscous on the entry, intense and with seductive sweet fig and date notes, yet the acidity maintains balance and freshness. Wonderful. 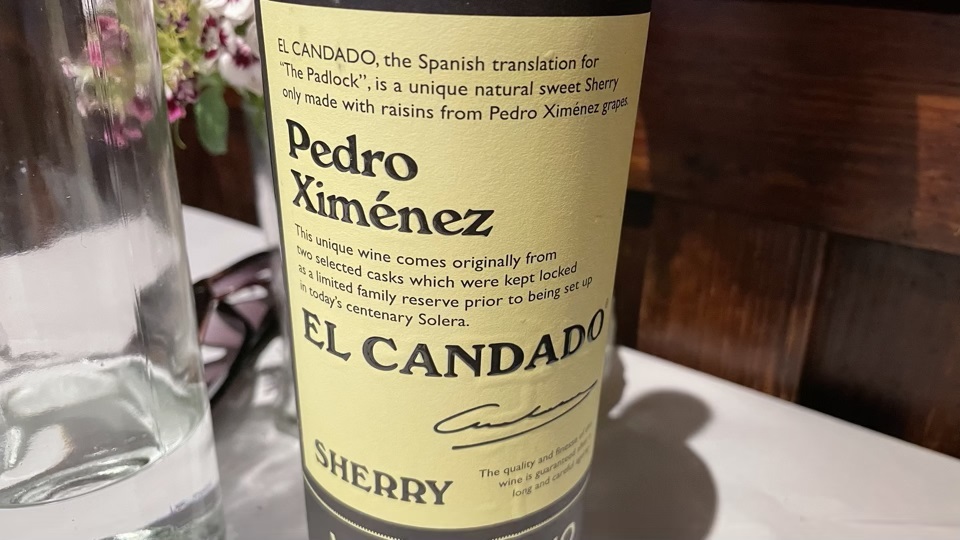 It was a perfect midweek supper. I made a mental note to return soon and bid a hello to Andrew Edmunds, no longer at the table by the time I depart back into the outside world. There’s always another time.

If only that were true. As I sat in my car on the Pauillac quayside, watching the Queen’s funeral on my phone, I learned that Edmunds had unexpectedly passed away following a minor illness. As if my day was not melancholic already. It felt like a piece of Soho’s history had gone. Fortunately, the restaurant’s doors remain open. I cannot recommend Andrew Edmunds highly enough, especially those seeking a place to eat that is suffused with history and draped with charm, a bit rustic and yet serving delicious food accompanied by a trove of vinous treats. If you enter its doors, raise a toast to the man who, thank God, never moved with the times and in doing so, created a timeless restaurant.