Octopus with paprika and olive oil

Gastronomes flock to San Sebastián, the coastal city of northwest Spain, a constellation of boisterous pintxos bars and destination restaurants such as Arzak and Martin Berasagetui (the latter of which provided the most dazzling meal I have enjoyed over the last decade). Personally, I always make a detour to the city’s less trodden and touristic enclave – namely, the nearby port of San Juan de Pasajes, or Pasaia in the Basque tongue, directly east of San Sebastián.

Let’s not beat about the bush; at first glance San Juan de Pasajes looks like the city’s industrial underbelly with its blocks of vast warehouses and rusted quayside cranes. As you walk up the pedestrianized cobbled single artery on the northern flank of the Río Oiartzun that ends at a craggy keyhole entrance to the Atlantic, you cannot help noticing the timeworn shabbiness of the ancient buildings, the graffiti or the occasional whiff of urine in the darkened underpasses. I can live with that. This is a thriving fishing community with busy wharfs, and a place soaked in history (Victor Hugo resided here for several years). The bay is packed with rowing teams practicing their synchronized strokes, the bars are noisy and the squares are busy with locals enjoying their pintxos amid noisy chatter. There is something visceral about Pasaia that keeps bringing me back – along with one of my favorite restaurants. 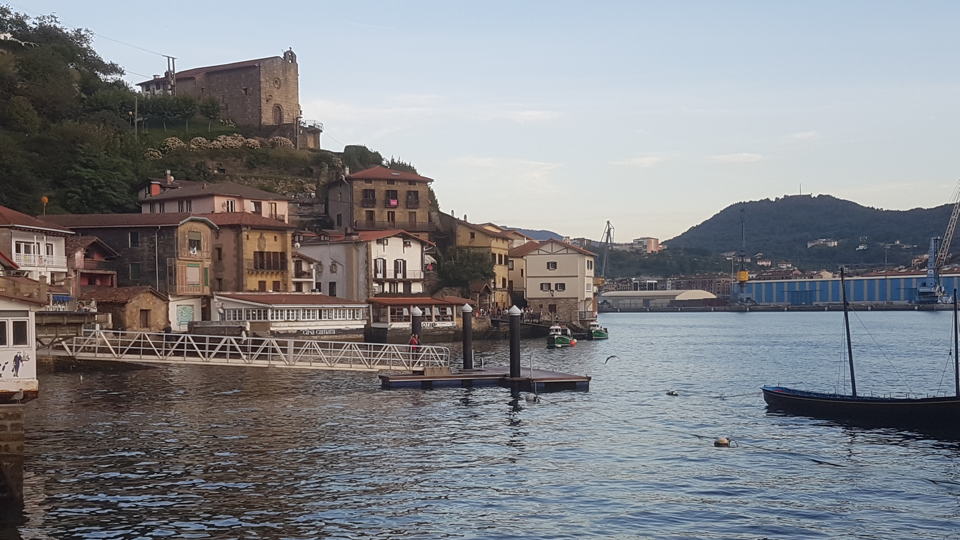 Casa Cámara sits on the Río Oiartzun. It is the building in the center of this picture.

Nestled down this thoroughfare, huddling among higgledy-piggledy 17th-century houses on the cusp of tumbling into the sea, you will find Casa Cámara, one of the oldest restaurants in the region. Founder Pablo Cámara served the first meal here in 1884. Four generations and 135 years later, every table was full of couples and families, a mixture of regulars and foreigners who had caught wind of this gem. Longevity is a rare commodity with respect to restaurants, and Casa Cámara has outlasted them all. It’s a great place to take little ones, not least because they can lean over a balustraded square opening and peer down at the caged lobsters in the shallow seawater below. This is where a bit of theatre comes into play. Whenever lobster or crab is ordered, the cage is hoisted up by a series of pulleys that look as if they were installed back in 1884. Awestruck kids gather to watch the creatures crawl around the cage in the middle of the restaurant, something you don’t see in your local McDonald’s. The night of my visit, I watched a young boy dangle his chosen lobster by the tail. He was escorted by the waiter to the kitchen to see it boiled alive. I doubt he will grow up to be vegetarian. 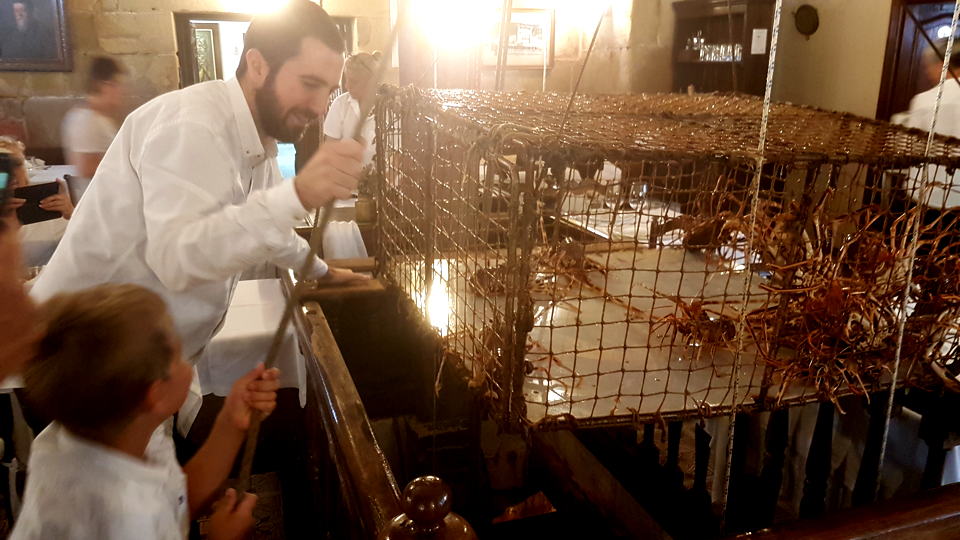 The waiter invites one of the young diners to hoist up the cage and choose dinner.

As you might guess by now, I would never advocate Casa Cámara as one of the region’s most salubrious places to dine, yet it undeniably possesses a unique beauty. Half the restaurant – in fact, the dining area – is built on stilts over the water that laps immediately below the window-side tables. You become mesmerized by the commuting fishing boats chugging their way outside. This time, I noticed the beautiful tiled flooring that must have been laid decades ago. Latticed windows extend around all three sides of the restaurant, generating a feeling of space and creating a sensation of eating outside rather than inside. It is quaint and pretty, charming and unpretentious. The Cámara family continues to serve customers and make sure everything runs smoothly. The staff, refreshingly, consists of not hip young dudes but a mixture of family members and older ladies who have been there for years. 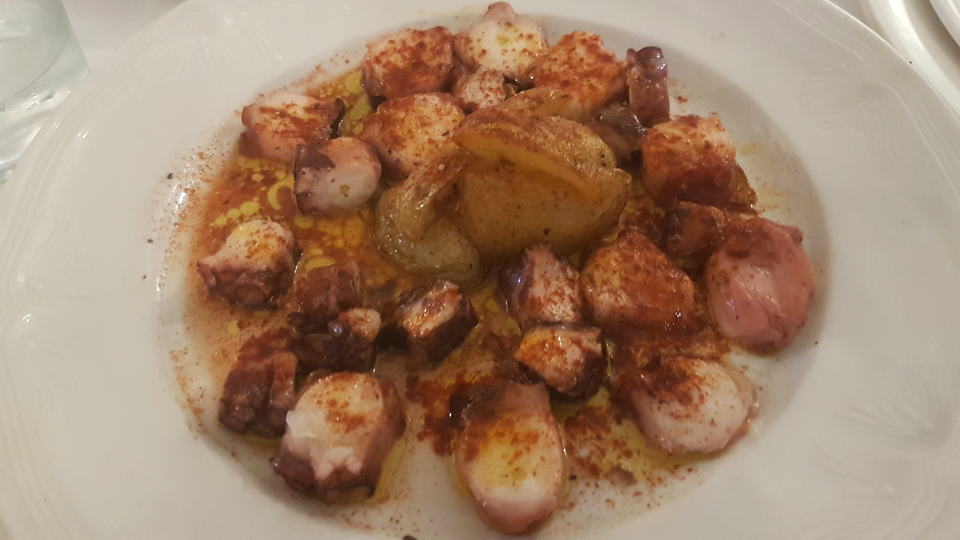 Octopus with paprika and olive oil

Of course, seafood is obligatory at Casa Cámara. I ordered three starters to share. The fried calamari was good, though not as good as at some of the upper-end tapas bars in the city. These came in a light batter, which kids love, but which I find detracts from the flavor. Better was a fabulous plate of locally caught octopus generously sprinkled with paprika and olive oil, perfectly cooked and seasoned. Best of all were the freshly caught razor clams that came simply garnished with parsley: chewy but not overcooked, and displaying a subtle saline tang. 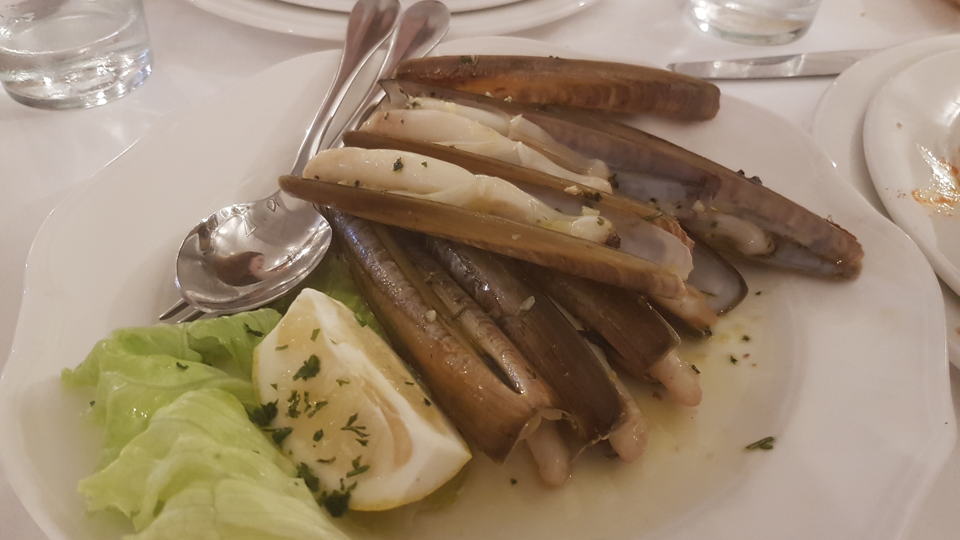 In the past I have enjoyed a fantastic sole meunière at Casa Cámara, and the fresh lobster is as good as you will find. I was recommended the shared whole turbot served with cockles, peeled prawns and roast potato. The fish is divided at the table according to your instructions. I compared it to the already legendary turbot served at Brat in London. Of course, here you do not have the emulsified skin, and there is less fleshy white meat by comparison. I would say that the turbot at Brat is more of an event and more memorable, whereas this is just a lovely, mouthwatering fish with perfectly crisp black skin oozing flavor. I also ordered hake in a pil-pil sauce – faultless, to be honest. 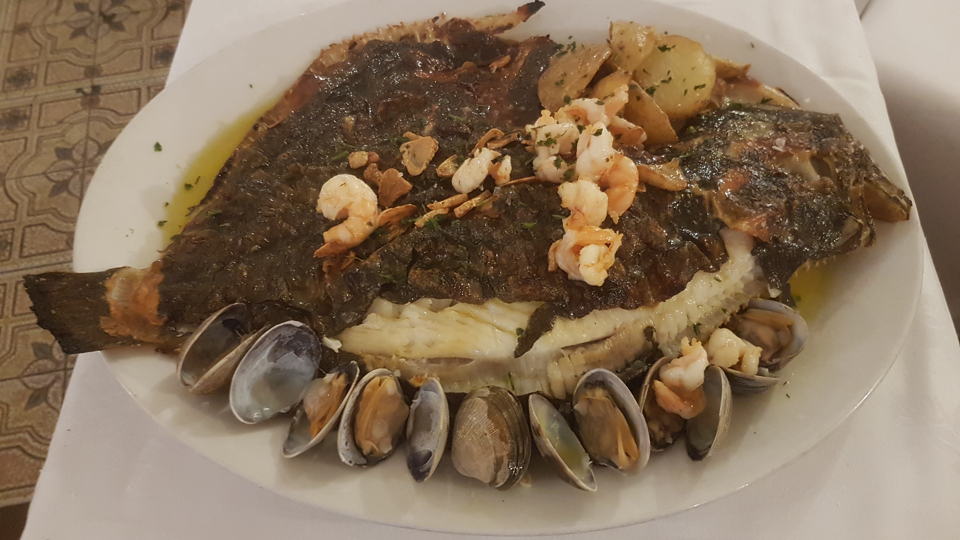 The main attraction was this delicious whole turbot with all the trimmings.

The desserts probably get overlooked in a place like this, but I had forgotten how good they are. A gooey strawberry cheesecake, one like your mum used to make, was polished off in no time, and the only complaint about the chocolate mousse was that there was too much to finish the bowl. The reineta pudding with custard was moist and dense, if just a little too sweet for my taste.

There’s good news and bad news about the wine list.

The bad news is that it’s way too brief and choices are severely limited; that has always been the way here. The good news is that they did have what might well be the finest white from the local D.O. Getariako Txakolina that I have tasted. I was blown away! The 2017 Argiñano from Bodegas K5 is a 100% Hondarrabi Zuri cultivated on granite soils that overlook the Cantabrian Sea; the bodega’s name derives from the five founding friends. The wine sports green flecks in the glass, and the fabulous nose offers vivid lime and Granny Smith scents flanked by pungent sea spray, crustacea and seaweed to ram home where this wine comes from. The palate is so razor-sharp that the acidity could leave you with a paper cut on your tongue, yet it is perfectly balanced, intense but not overwhelming, with a lip-smacking salty kiss on a finish that is blooming glorious. If anything, it improved over the next 24 hours, gaining more harmony and nuance. It left me pondering why we pay such premiums for classic regions, when this gem is a measly €25 on a restaurant list. 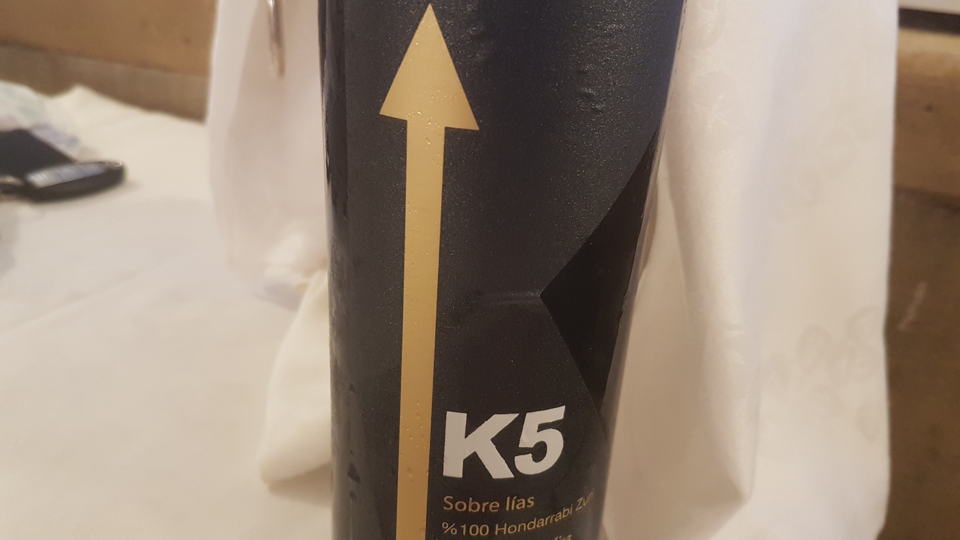 Casa Cámara is a great place to go to if you want a break from the glitzy, touristy side of San Sebastián and its environs. The restaurant is not directly accessible by car and requires a 10-minute walk; alternatively, a ferry boat across the bay drops you just a few meters away. Booking is essential, although it is not a place you must reserve months in advance. Spanish and French are spoken, and one of the waiters spoke perfectly good English; likewise, the menu is written in all three languages. This is an institution that goes about its business in discreet fashion, doing what it has done for decades: serving delicious seafood and providing a memorable evening out. I have no doubt it will be here for decades to come.