In the minds of many knowledgeable food experts and lovers, Dal Pescatore is Italy’s best restaurant. Housed in a beautiful countryside villa, with spacious, well lit rooms and large tables that are set far apart Dal Pescatore offers guests precise cooking deeply rooted in the classics and a fine wine list with older vintages, all delivered with professional but not stuffy service. 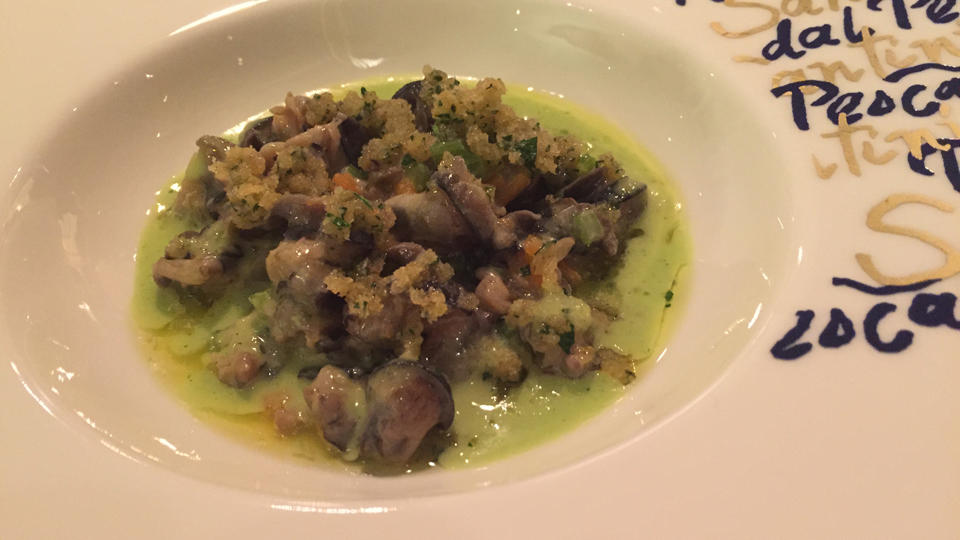 Dal Pescatore is arguably one of the world’s twenty or thirty greatest dining destinations. Simply put, Dal Pescatore is everything a restaurant should be. A member of the Relais & Chateaux chain, located in a bucolic countryside setting in the Parco dell’Oglio in northern Italy not too far from the beautiful city of Mantua, Dal Pescatore offers a combination of restaurant, a peaceful retreat and a hymn to good taste like few other dining destinations I can think of.

Clearly, this success is due to the owners, the Santini family, who have been at the helm here for generations.  Most of the cooking today is done by Nadia Santini (once voted “world’s best chef”) and her son Giovanni, but Nadia’s mother-in-law, Bruna Santini, is also still at work in the kitchen. Dal Pescatore has always been a matriarchal kitchen. Young Giovanni is the first male to play any major role behind the stoves in Dal Pescatore’s long and distinguished history. The restaurant was founded by Antonio and Teresa Santini in 1925 (Teresa was actually born in Brazil from well-traveled Italian parents) who a couple of years later had their son Giovanni (who later married Bruna). Giovanni and Bruna had a son, Antonio (named in honor of the grandfather as tradition dictates), who married Nadia. The two together, thanks to an innate curiosity and will to improve, traveled to gourmet temples all over the world (especially France). Technical ability helped complete the transformation of what was once a simple osteria (Vino e Pesce) into one of the world’s best restaurants. I stress the family history because it is a very important aspect of Dal Pescatore: in fact, not just the restaurant, but the family is well steeped in tradition and attachment to the local territory, its recipes and ingredients. That mindset is very much evident in everything about Dal Pescatore and one of the secrets of its longstanding success. 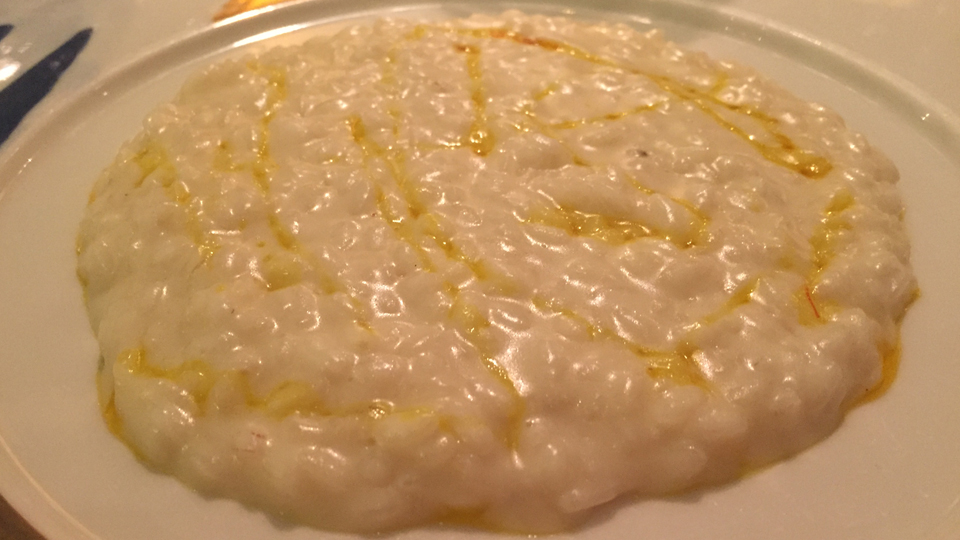 Rice with a mixed goat cheese fondue and saffron honey

The food is nothing short of spectacular. While most foreigners are well versed in all there is to know about Tuscany, its food and its recipes (Tuscan cuisine is certainly hearty and flavorful, but it’s hardly one of Italy’s best or even more interesting regional cuisines), I am always amazed by how little is known about the truly exceptional ingredients and recipes of other Italian regions. Sure the Medici are Italy’s most famous noble family (and rightly so, for a slew of important reasons) but how many people are aware, I wonder, of the many contributions of say, for example, the Gonzaga dynasty to Italian history, lore, reputation and general well-being? It so happens that Mantua has a long and distinguished history of uniquely fine food. 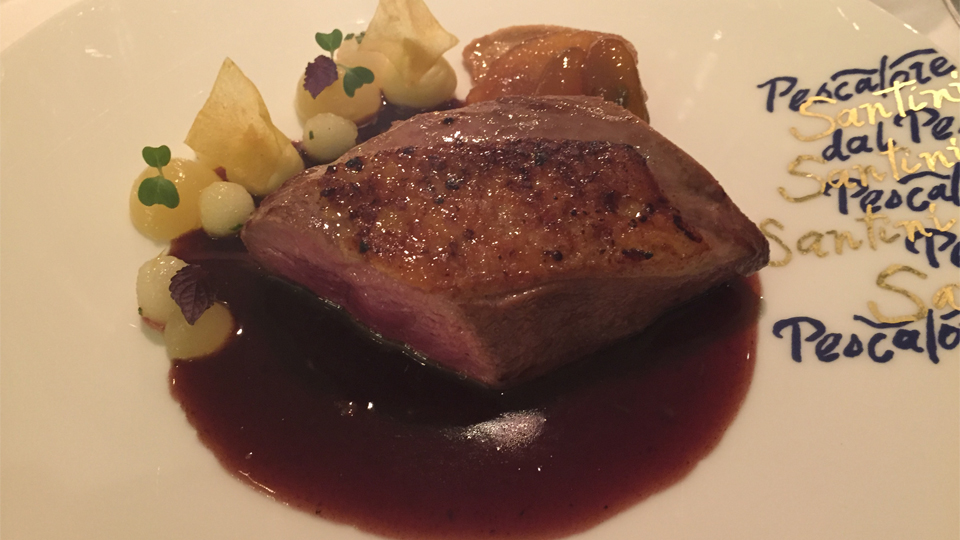 The city’s finest hour in food rings in with the tortelli di zucca, of which there are myriad interpretations throughout northern Italy (in a roughly 200 kilometer area spanning from Ferrara to Cremona), though all versions rely on various combinations of pumpkin, amaretti, parmigiano, and spicy fruit mostarda. It is one of those Italian recipes you might try countless times and that you’ll find will never be exactly the same in two restaurants, or even two households for that matter, each individual tweaking the recipe according to what his or her mother and/or grand-mother used to do, or what local traditions demand. When properly cooked, tortelli di zucca belong in Italy’s pantheon of greatest all-time recipes. Clearly, as it’s a dish of Renaissance times when sweet, sour and salty juxtapositions and generally stronger flavors than today’s were much in vogue, tortelli di zucca provides a different taste experience than most pasta dishes you may know and love. Certainly, you need to like a little sweetness in your food to enjoy them at their fullest. At Dal Pescatore, 330 grams of flour and ten eggs are used in order to make about 60-70 tortelli. Nadia and Giovanni’s filling is particular in that it includes a rare mostarda of white watermelon, along with more usual ingredients, such as nutmeg and breadcrumbs. About six of these heavenly candy lookalikes make it into your dish, smothered with grated parmigiano and liquid butter (but the Santini’s have reduced the amount of butter and parmigiano over the years, in an effort to lighten up the dish in tune with more modern lifestyles). I guarantee, once you’ll have gobbled down those six small morsels of pasta heaven in just a few seconds (they’re that irresistible), you’ll be left thinking you could have easily eaten three times that number and be none the worse for wear (such is the magic of a memorable, perfectly rendered recipe and dish!). All the various creations I tried on my latest evening at Dal Pescatore were of a similarly, precisely cooked high level. My meal could not have been any better. 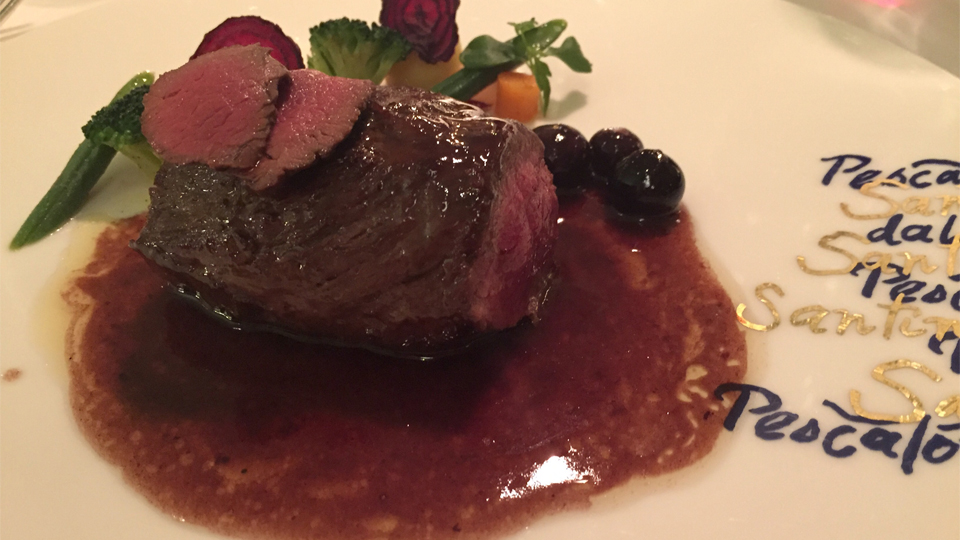 Rack of roe deer with Cabernet and blueberry sauce

As Vinous readers know only too well, a good wine list with many older vintages only adds to the pleasure of the overall dining experience. In Dal Pescatore’s fine list, wines are curiously listed by vintage, from youngest to oldest. It’s a veritable who’s who of all the most famous names in wine. Clearly, Antonio and his son Alberto, who roam the dining room, are wine lovers with very classic tastes, and have admirably stuck to the personal favorites they have bought and collected over the years. So you’ll find lots of bottles, for example, from the likes of Coche-Dury, Gaja, and Trimbach. The list is not just a bunch of famous names lumped together, but rather a well thought out compilation of wines clearly chosen from estates known for very food-friendly wines too. For example, it can’t be by accident that their wine choices from Alsace include mainly wines from the likes of Trimbach and Kientzler, two Alsatian names that make some of that region’s driest, purest and most refined wines that match well to Italy’s for the most part lighter, fresh ingredient-based cuisine (this is yet another example of the attention to detail that goes a long way in explaining Dal Pescatore’s long running success). 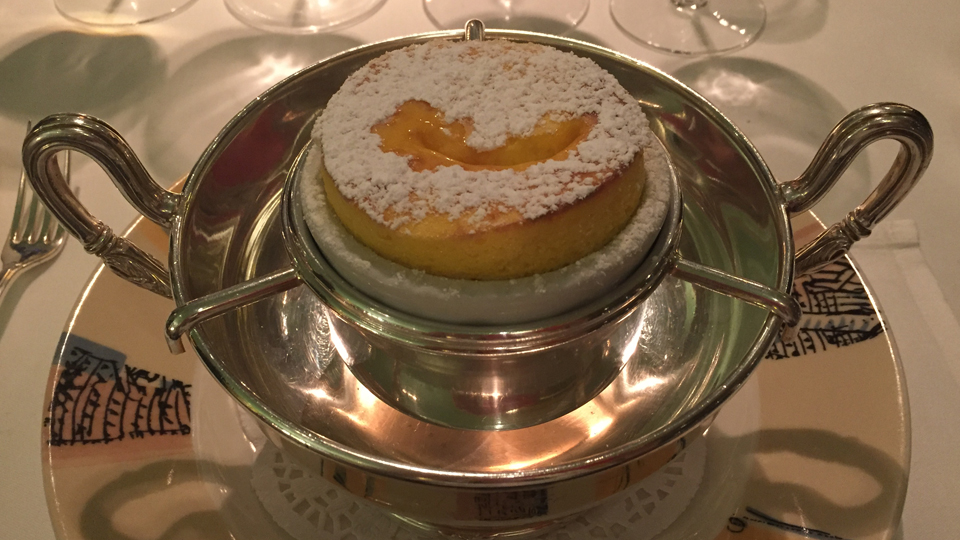 On this night, the 1999 Trimbach Riesling Clos Sainte Hune was slightly less magnificent than usual, most likely due to a less than perfect cork, one that allowed oxygen to seep through at a slightly faster rate than would have been ideal. Though not the freshest example of this wine I have ever had, and in fact already quite golden-yellow in color, it still offered a heady mouthful of licorice, mineral, citrus and musky flavors of an intensity and precision that only Clos Sainte Hune, amongst the world’s great dry Rieslings, can deliver. Drinking the 2010 Coche-Dury Meursault Perrières in 2017 was infanticide, but I wanted to see how this magnificent wine was developing. Currently tight as nails, very shut down and dominated by a generous amount of new oak, I was left thinking I should have ordered something else. I’m into studying a great wine’s development as much as the next guy, but attempting to drink this very youthful beauty on this night was not one of the most intelligent things I’ve done. I won’t touch another bottle for at least another five or six years. By contrast, the 1997 Montevertine Il Sodaccio di Montevertine was ready to go. A blend of 85% Sangiovese and 15% Canaiolo Nero, the Sodaccio was a drinking experience I won’t soon forget. Beautifully red in color, it was a textbook example of everything this great blend of grapes should always be. Il Sodaccio was a single-vineyard wine made from 1981 through 1998 only, when the vines (planted in 1972) had to be ripped up because of esca disease (the grapes from the new vines planted are now used to make the estate’s flagship Le Pergole Torte). The 1997 drank beautifully and boasted well delineated red berry, black tea and tarry flavors, as well as wonderful balance. As good as the Il Sodaccio was, the close to the meal was even better. The magnificent 1983 Trimbach Gewürztraminer Séléction de Grains Nobles is a work of art (actually, the Trimbachs throw all their guns at you on this label, which reads Gewürztraminer Réserve Personnelle Vendanges Tardives Séléction de Grains Nobles). It showed just how delightfully complex and balanced a great Gewürztraminer wine can be. 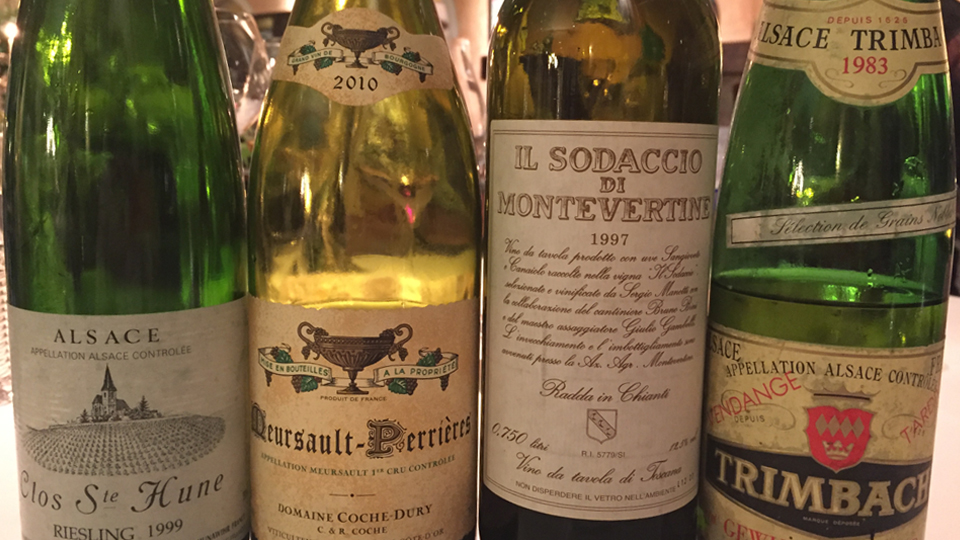 In the final touch of elegance and classy behavior that epitomizes Antonio Santini, his family, and his restaurant, I found it on my bill at night’s end at the same, much lower price, of another sticky I had originally chosen and ordered to finish the night off with. As these things might happen, Antonio had been unable to find the other SGN I had asked for, and so generously came back from the cellar with a choice of two other different wonderful Alsatian SGNs, and so I chose the 1983 Trimbach. I fully expected to pay a much steeper price for my sin of gluttony, but that was not to be the case, as Antonio charged me exactly the same amount as the bottle I had originally asked for, but that must have momentarily gone AWOL. In the end, that’s the sort of little things that go a long way in making an impression. I was once again reminded why Dal Pescatore is Italy’s longest running three Michelin star restaurant (ever since 1996). Clearly, there are reasons why that is so. Yes, there are reasons.