Whatever happened to lunch?

Where did it go?

At what point did it vanish from our daily routine?

In my first job, feigning work for a Lloyds’ underwriter, lunch was proper. The entire office would migrate like swallows to a nearby watering hole for a swift pint (or two) soaked up by steak sandwiches. Friday lunch was extended and inevitably one or two faces would not resurface until the following Monday, on one occasion, never again. The stab in the heart for lunch was Gordon Gekko’s famous refrain: Lunch is for wimps. Subsequently lunch shrunk into an emaciated sandwich scoffed within 20 seconds hunched over the computer with a half-eaten Kitkat. Its final vestige is the country where I am writing this Vinous Table - France. At one nanosecond past noon, the entire nation switches off their computer, puts down their pen and pulls down the shutters for two hours. Lunch is sacrosanct, a pillar of society. As the French motto goes: Liberté, Egalité, Fraternité, Déjeuner.

Upholding the tradition of a proper lunch with all its bells and whistles is the informally titled Grouse Club, formed for no reason but to share the titular game bird after the Glorious Twelfth. Entry is easier to Grouse Club than the better-known Fight Club. No need for fisticuffs. Just proof that you know your Claret from your Beaujolais, vehemently oppose veganism and can talk nonsense for an afternoon. This year saw an honorary addition to Grouse Club, no less than Brett Graham. Anyone who dined at The Ledbury will attest that Graham knows his way around a stove. It was the equivalent of inviting David Beckham round for a spot of footie in the back garden or Jimmy Page to come and tune your guitar. Given the inconvenience of a global pandemic, instead of a restaurant, Lord Bruce’s suggested we use his pad. All Graham had to do was rustle up the greatest lunch ever, something that I know from personal experience is not beyond his means.

Hey Gekko...this lunch was not going to be for wimps. 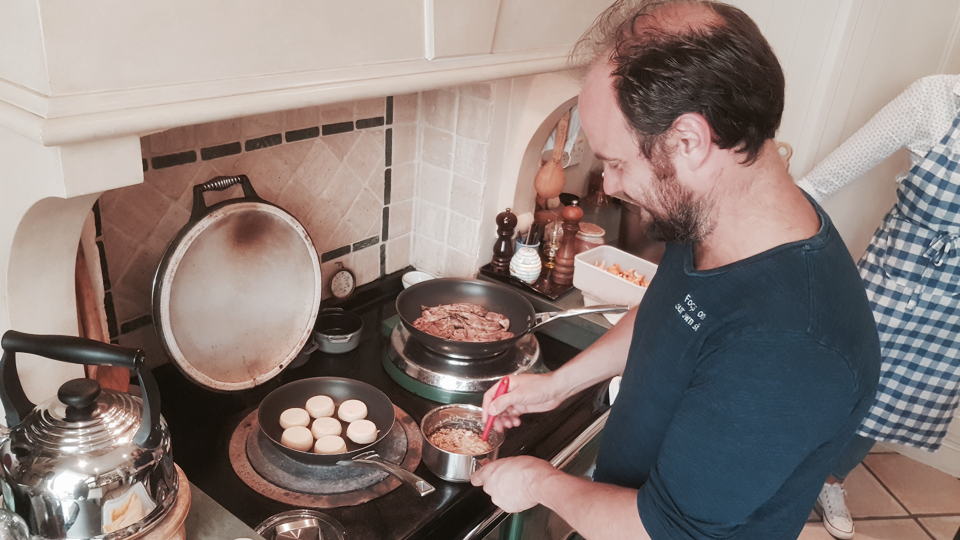 Brett Graham hard at work in the kitchen. I thought about offering him some advice, but he seemed to know what he was doing.

Parking my bicycle in the hallway and disentangling myself from facemask, my olfactory senses went into meltdown thanks to the heavenly scents wafting from the rear kitchen, a mixture of game, wild herbs and sizzling potatoes so intoxicating that my tummy gurgled with glee. Lunch began in the Lord’s rear garden, one that makes Versailles look like dumping ground on the outskirts of Dagenham. Having not seen each other since the outbreak of lockdown, there was an inevitable outpouring of pre-prandial gossip until Graham sashayed into the garden holding a plate of oat and herring milt. 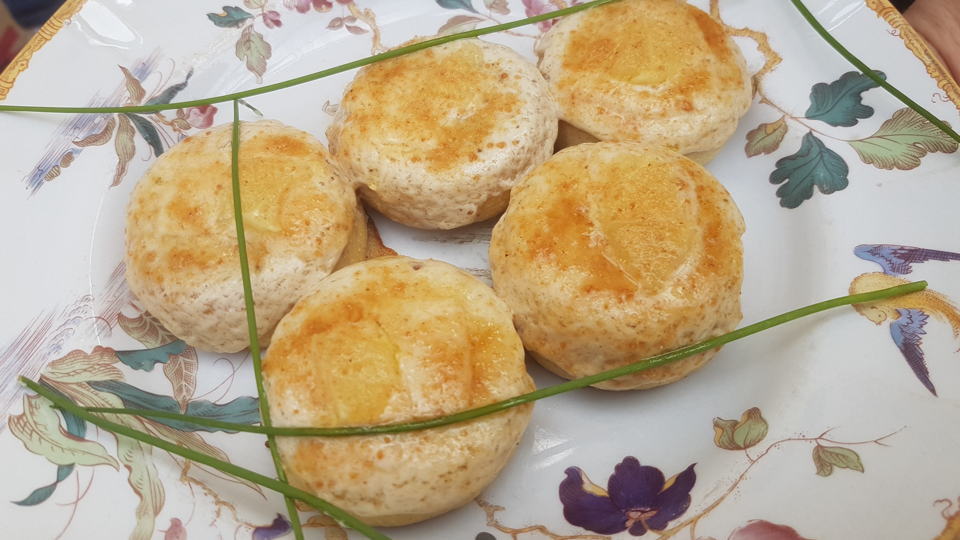 A quick search on the Interweb reads as follows: Milt refers to the male genitalia of fish when they contain sperm. Now I understand why somebody invented the more appetizing description. Sperm notwithstanding, it emitted one of the most gorgeous aromas I have ever encountered, alongside the milky whiff of a newborn child or the spice market of a Turkish town long forgotten or the Ginza branch of KFC. It was like inhaling all your cherished childhood memories at once – so warm and soothing, something your grandma might have welcomed you home with after a long winter’s walk across the dales. 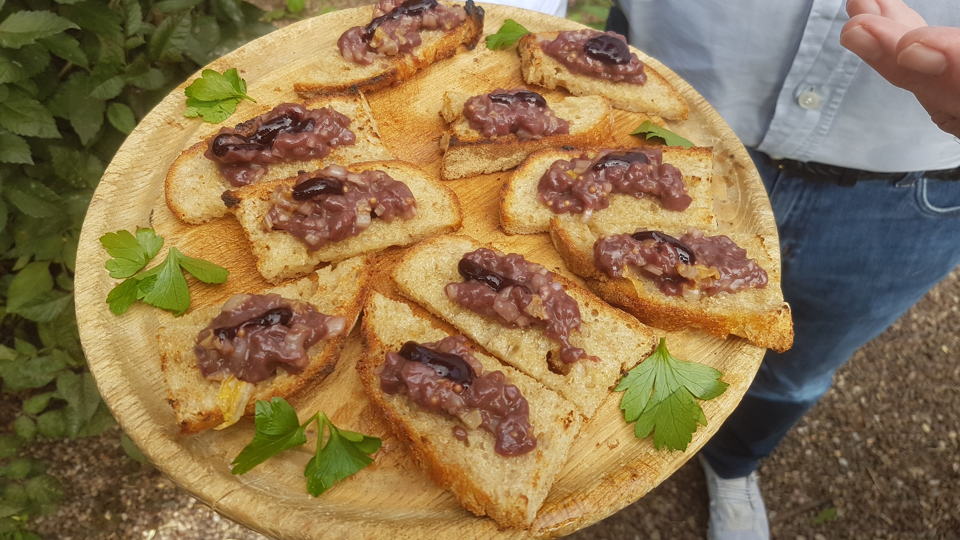 Hot on its heels came the vegan option - raw fallow deer heart with damson ketchup and beef fat toast (well, vegan if you served the blob of damson ketchup and skipped the Bambi on toast.) I could have sworn its heart was still beating. Continuing the deer theme came caramelized fallow deer heart with balsamic. Its texture was not unlike foie gras though presumably the deer does not spend weeks being fed gavage. Graham could confirm this since the deer actually came from his own herd. 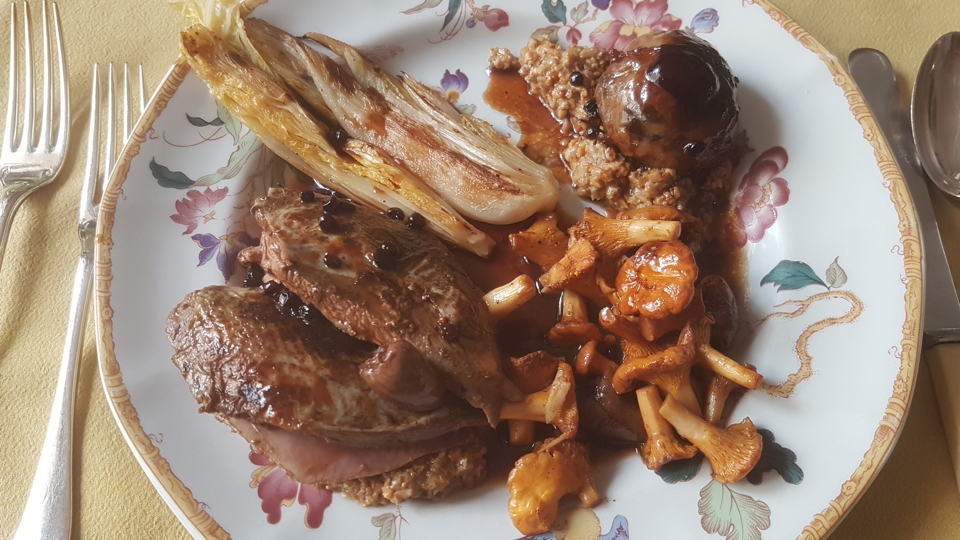 I had to avert my eyes whilst editing this image because it looked so delicious.

We then moved into the main dining room. The main course of roast Gunnerside grouse with creamed girolles, grouse faggots (meatballs) and elderberries served with roast potatoes cooked in goose fat and fermented cabbage was nothing short of sen-bloomin’-sational. Nothing fancy. No culinary froufrou. Simply grouse at its zenith, lifted by the sweet and tangy elderberry sauce that married perfectly with the kind of roast potato you expect from a feted two Michelin starred chef, in other words, a million times better than yours or mine even though you cannot tell what is done differently. The supplementary bowl of grouse legs begged to be sucked off the bone, so fabulous that I scribbled down the recipe. It just reads: Grouse. If only all culinary dishes necessitated just one ingredient. 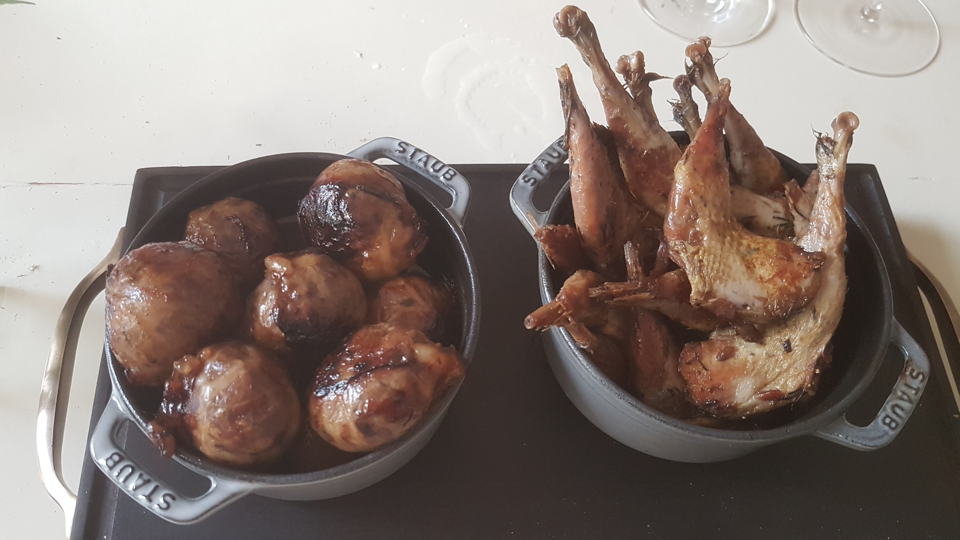 Finally, homemade chocolate cake, cooked by no less than her ladyship. It was perfect in every way, shape and form.

The wine wasn’t bad either. Lord Bruce’s cellar makes the legendary Glamis Castle cellar look like my IKEA wine rack when its only resident was a supermarket Auxey-Duresses from some one-star négociant. 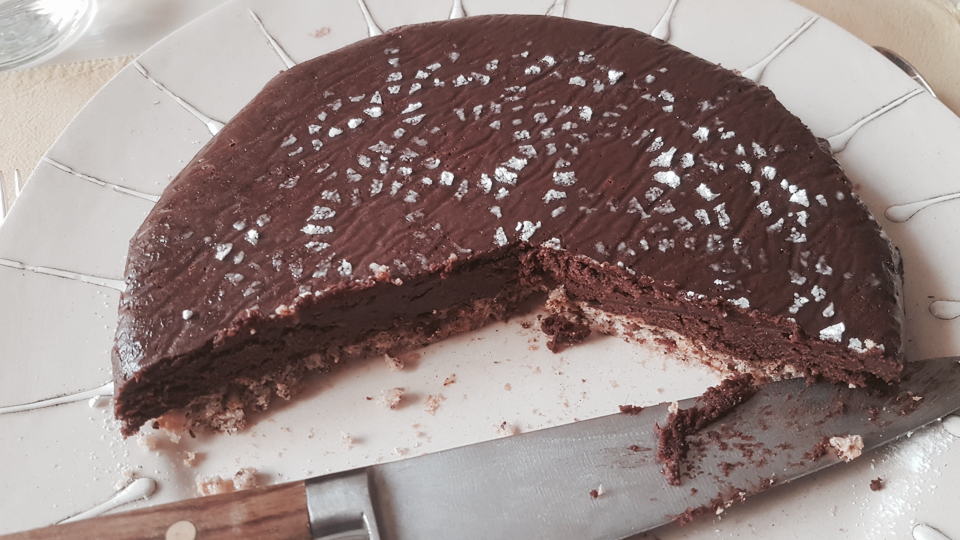 We commenced with the 1988 Cristal. I wish every Tuesday lunch would start with ‘88 Cristal. Burnished amber in color, it has a captivating bouquet with mandarin and apricot scents, then traces of honeysuckle, Mirabelle and light Tokaji aszú aromas. Despite its 32-years of age, it was vibrant as the day its umbilical was cut, weighty in the mouth with real grip. The acidity was spot on and the finish brimmed with tension, orange rind and marmalade notes zinging around the mouth some 30-45 seconds after it was gone. Just brilliant. 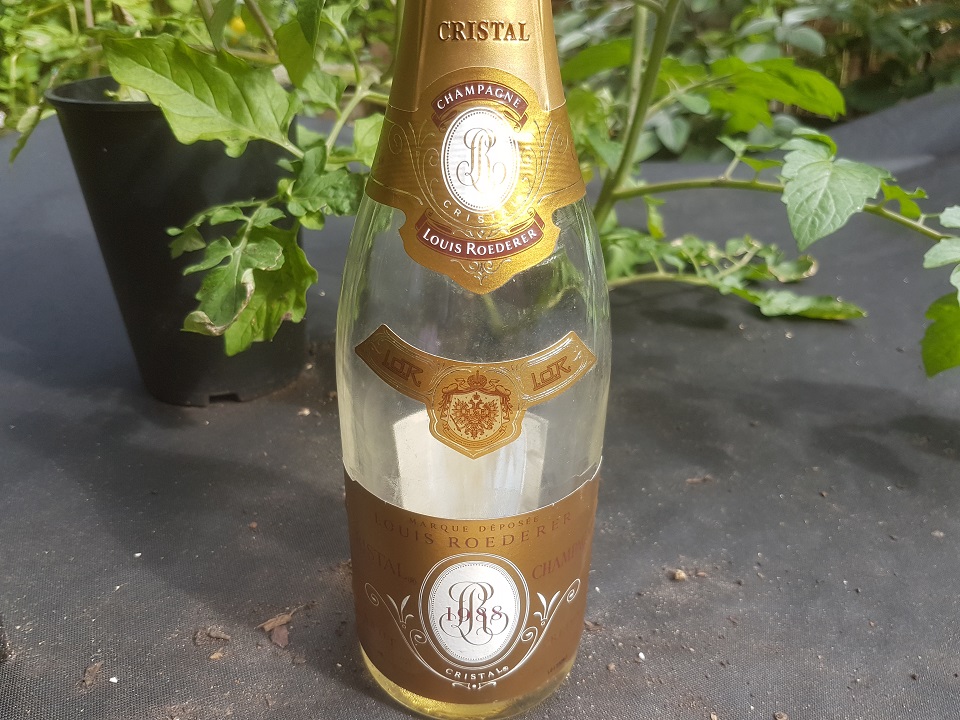 The vinous centerpiece was a quartet of Left Banks from the legendary 1928 vintage. Thankfully unlike last year when the chef at Otto’s seasoned his sauce with 1964 Petrus, Graham knew better than to sex up his elderberry sauce with a splash of 92-year old Claret.

First came the 1928 Ducru-Beaucaillou, to date the oldest vintage that I have tasted. It was a significant year for the Saint-Julien grandee. Since 1866 the Johnston family had owned the estate, however, their profit line was more dependent on the négociant business that ran into financial dire straits after Prohibition. The quality of wine is said not to have suffered, though they were forced to sell the property in 1928 to one F. Debarats de Burke, related to the Miailhe family of Pichon Comtesse de Lalande. He never made a success of it and in 1941 sold it to Francis Borie, grandfather of present owner, Bruno Borie, a gourmand who I suspect is reading this and dearly wishing he had been here. It was clearly showing its age in the glass with a wide bricked rim. The bouquet was initially fragile, yet cohered in the glass with leather, earthenware and undergrowth aromas. The palate was fully mature though certainly not past its sell-by date, the tannins frailer than the accompanying Saint-Julien with a slightly acetic finish. It was a thoroughly enjoyable Ducru-Beaucaillou, though I would drink any bottles sooner rather than later. It was paired with the 1928 Gruaud Larose. At this point in time the estate was divided after the Sarget portion was sold to Mme Adrienne Lavielle, the Baronne Sarget de Lafontaine. It was only reunited in 1945. This is one of my favorite wines of the 20th century, a spellbinding example poured some 10 years ago in London that stunned its audience with its grandeur. This bottle was not quite as spectacular but the aromatics were more compelling than the Ducru-Beaucaillou with vestiges of brambly red fruit, sage, leather and mint. The palate has a little more depth and grip, wonderful balance and depth with a gentle but insistent grip towards the finish. Granted, I noticed that it just began fading after an hour in the glass, unlike the previous bottle that continued soaring to the heavens, yet it remains one of the best Left Bank wines of the vintage. 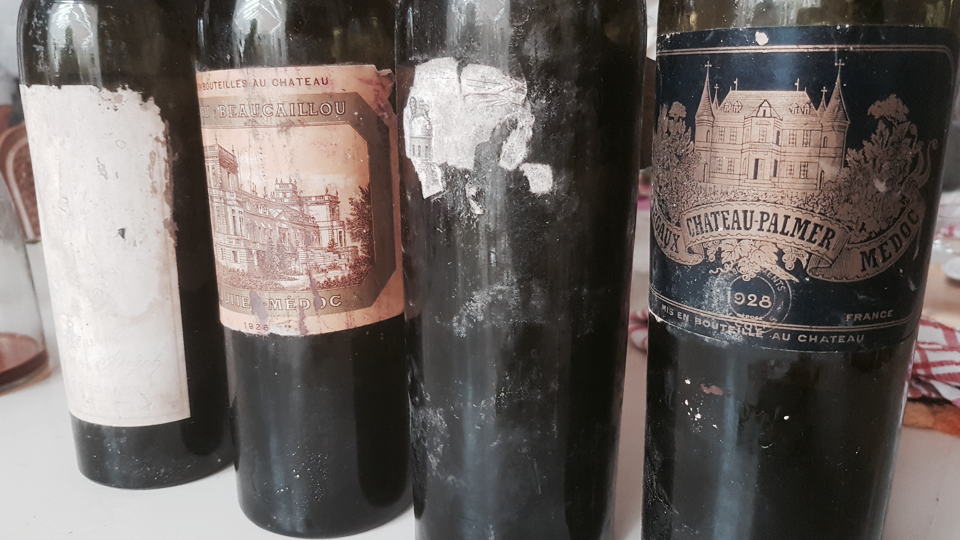 Then the 1928 Palmer waltzed in and stole the show. This was my third bottle, the first astonishing and the second, reconditioned at the property, not correct. This bottle replicated the mesmerizing quality of that first. Deeper and more youthful in color than the preceding pair of Saint-Juliens, the bouquet bursts from the glass with blackberry, crushed violets and peony, vestiges of blue fruit and iodine, quintessentially Margaux. Not only did it make an immediate impression but also over the course of two hours it never faded one jot. The palate did not disappoint: supple tannins, remnants of black and blueberry fruit, sinewy and with impressive grip, yet nubile on the extraordinary long finish. It prefigures the legendary 1961, two wines cut from the same impeccable cloth. Provenance clearly played a part but if your bottle is as good as this then this otherworldly Palmer will amaze you. The 1928 Latour was perplexing. There was nothing identifiably faulty about the bottle and yet having drunk this “Everest” three of four times in the past, I knew that it was a Rolls Royce with a flat tire despite sound provenance. It was forgiven because of its age – that’s just the way it goes sometimes.

There was one younger wine. The 1978 La Mission Haut-Brion is one of the best wines of that decade and did not disappoint. Still youthful and dark in hue, it has that wonderful bouquet of blackberries, gravel and black olive, here displaying a heightened marine/Japanese nori scent. The palate is medium-bodied with dense black fruit, melted tar and pencil lead, a La Mission that responds to aeration as it gains depth and grip, whilst maintaining outstanding delineation. It still comes across quite sweet on the finish, testifying a La Mission that intends to give pleasure for many years to come.

Last but certainly not least, the 1959 Yquem. This is another wine that I have drunk on three or four occasions. The first couple of times, it did not reach my lofty expectations, yet the last two bottles have delivered fireworks. Limpid amber in color, the bouquet errs towards Barsac in style, scents of orange pith, Clementine, dried apricot, hints of saffron and lemongrass. The palate is quite weighty, oddly, like a second cousin twice removed from the 1988 Cristal enjoyed earlier, of course, without the residual sugar and bubbles! But it had a similar weight, more waxy in texture than viscous towards the finish. It conveyed superb energy and grace. 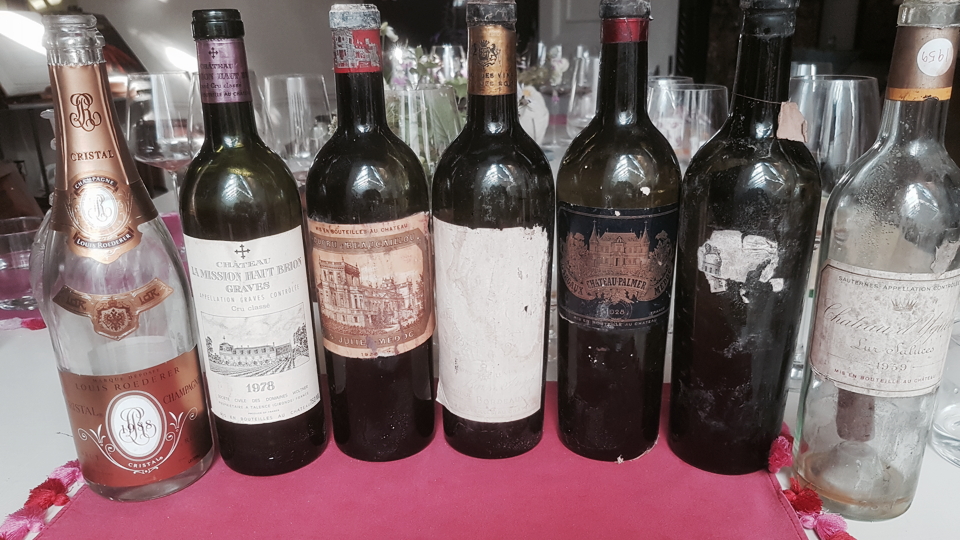 The full line-up of fermented grape juice that formed a ‘proper’ lunch.

As we finished the dregs of Sauternes, lunch began to wind down, as it ought to after four or five hours of wanton libation. In any case, Graham needed time to put on his Marigolds to do the washing up. It had been a lunch fit for kings. Really, it had been a lunch where we felt renewed appreciation for friendship after weeks being denied much in the way of social interaction. Not knowing whether winter would bring a second wave of pandemic, we had pulled out all the stops and done it in style. What I appreciated about this dinner, friendship and banter aside, was its simplicity. Graham cooked dishes that were packed with mouth-watering flavors, yet their straightforwardness formed a perfect blank canvas against which we could appreciate the stunning array of wines. How Grouse Club will top the 2020 edition, God only knows. It will have to involve a private jet, a Hollywood star and a magnum of 1945 Romanée-Conti. On second thoughts, all it just needs are good friends, good wine and grouse.

Special thanks to Brett Graham for cooking lunch and Lord Bruce for hosting and providing such special bottles of fermented grape juice.