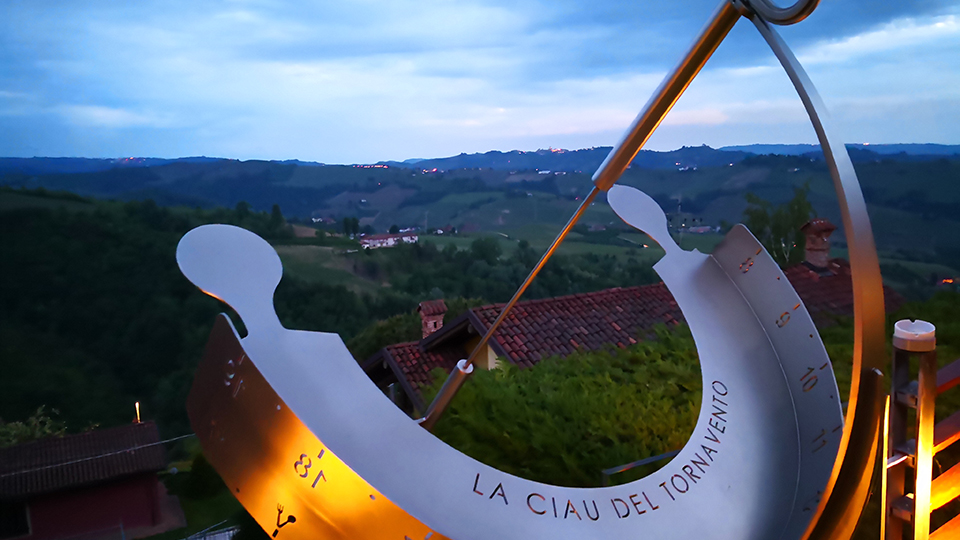 One of my many wine stories, accumulated over almost 40 years of visiting wine estates and restaurants, tells you almost all you need to know about La Ciau del Tornavento, one of Italy’s truly great, great restaurants. A few years ago, while sitting with Jean Trimbach in the family tasting room in Ribeauvillé (no, that’s not a typo; I know this Vinous Table is about a Piedmontese restaurant, but bear with me), he said to me, “And now, Ian, a wine even you have not yet tasted.” Clearly, even though I was thankful for Trimbach’s kind compliment, I asked what wine that might be, for just like everyone else, there are many wines out there that I have yet to try. Trimbach replied, “I want you to taste our new Séléction de Vieilles Vignes Riesling that I am just about to release.” At those words, my synaptic connections started immediately sputtering and firing, and a vague wave of memories floated down into my conscious sphere. And so I replied, “But you know, Jean, I think I have actually had that wine.” “No, you haven’t,” he said matter-of-factly, his layers of Teutonic-derived patience no doubt tested by the Latin impudence on display. “But I’m pretty sure I have - in Italy somewhere,” I offered, suddenly more tentative. Trimbach smiled but cut the discussion short: “Ian, it’s impossible.” Well, precisely at that moment in time, my little grey cells (which have obviously developed a good deal of alcohol resistance over the decades and still function despite the never-ending effluvium) must have had Poirot eyes twinkling, as they enabled me to fire off the answer I had been looking for: “La Ciau del Tornavento, just a few months ago!” I blurted out. Admirably, Jean Trimbach did not miss a step; just as quickly, and still smiling, he retorted with a very Gallic shrug: “OK, OK, I see now. That place has one of the world’s best wine lists, and is only one of three I can think of that has this wine right now.”  I always like to imagine that such busy and capable little neurons would have left Hercules himself pondering what might have been had I been around in his life instead of Captain Hastings. 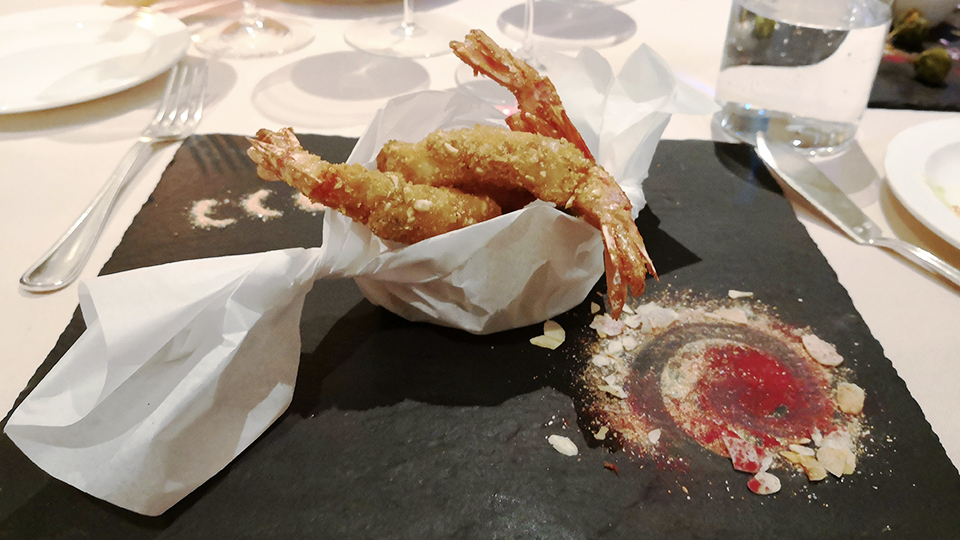 Founded by Maurilio Garola and Nadia Benech, La Ciau del Tornavento is not just one of Piedmont’s but one of Italy’s best and most beautiful restaurants. La Ciau offers expertly prepared food an idyllic terrace, beautiful views of the vineyards, an aromatic herb garden, rooms to sleep in (the restaurant is also a small inn) and one of Italy’s “top ten” wine cellars. Readers who have followed me even just a little over the years know I do not throw around titles like that one at every turn of my laptop; in fact, La Ciau del Tornavento offers wine lovers 2,899 wines from 334 different producers and 13 different countries. About half of the wine collection is made up of Barolo and Barbaresco, but a vast array of other Piedmontese reds is also present. Roughly one-tenth of the cellar is devoted to Italian white wines, but in fact, all the world’s greatest wine estates are well represented (another 10% of the cellar is composed of Bordeaux’s great wines, for example). Even better, and unlike other impressive wine cellars in famous restaurants of Italy, La Ciau del Tornavento’s cellar is an orderly, almost museum-like space in which it is a pleasure to walk around while admiring all the many gorgeous bottles. (For those who can afford them, or like to dream, or realize they never have a big enough bag with them when they really need it, there are entire walls of Cristal, Krug and d’Yquem.) You can easily understand why small and large groups of sybarites choose to start the evening with an aperitif in the cellar. And you also understand why remaining too long underground in this specific space means risking Stendhal’s syndrome. 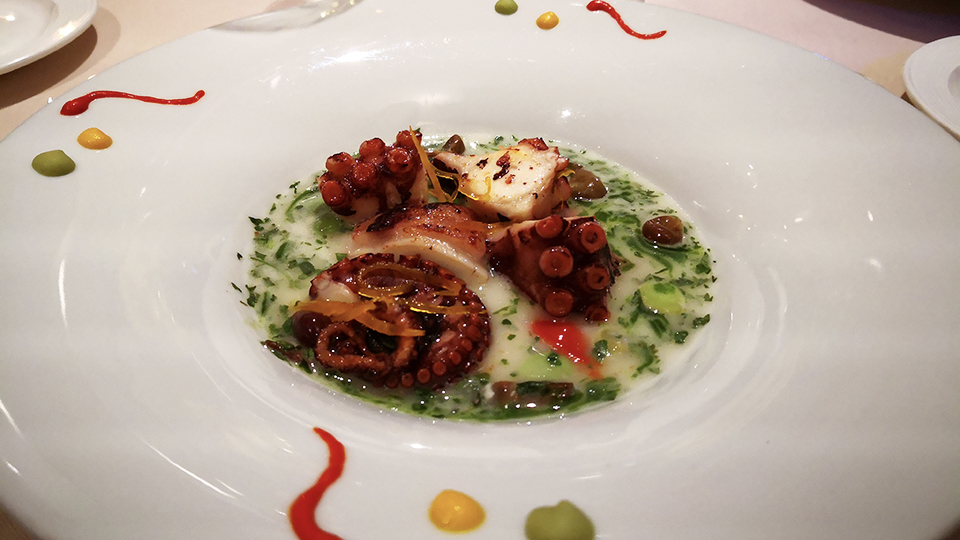 However, the food at La Ciau del Tornavento does not play second fiddle to the wines. Garola intelligently saves a section of his menu for the “classics,” and frankly, those are the waters I almost always fish in when sitting at one of this restaurant’s tables. Frog drumsticks, snails (somewhat unfortunately translated as “escargot” on the menu, but I’ll keep quiet; after all, this part of Italy has a very French soul), the agnolotti (“ravioli” in the menu’s English translation) del plin filled with roast meat sauce or with seirass (when good, as the one used at La Ciau del Tornavento undoubtedly is, seirass is a fantastic, truly unbelievably delicious local Piedmontese ricotta) and the vitello tonnato are must-tries. But all the other dishes on the menu usually reveal above-average technical ability, first-rate ingredients and great care. I have always felt that the frog drumsticks,  especially, must come served on plates with invisible holes, such is the speed at which those cute little mouthfuls disappear from the plate while you sit there, feeling light and with armies of Pavlovian-dog-like saliva molecules still rioting in your mouth long afterward, when there is nary a drumstick in sight. 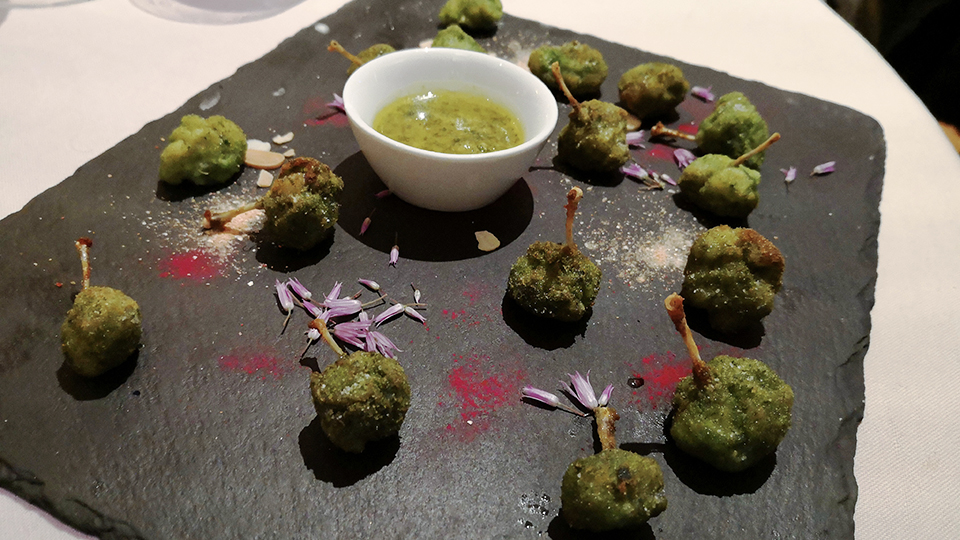 I drink more Barolo and Barbaresco than my liver cares for (Grignolinos and Freisas too, for that matter). And so on this particular evening, and given the wine list, I chose to go with what are arguably Italy’s two best bubblies, in themselves well suited to many classics of Piedmontese cuisine. The 2005 Ferrari Riserva del Fondatore Giulio Ferrari is the result of a difficult year for sparkling wines in Trentino (rather hot in June and then again at the end of July) but the wine is lovely, deep, rich and complex. It was first made in 1972 as a trial by winemaker Mauro Lunelli (the Lunelli family owns the Ferrari wine estate of Trentino). Mauro Lunelli decided to set aside a couple thousand bottles of a Ferrari sparkler that smelled and tasted different to him than all those he had made up until then. Eight years later, he surprised his brothers Franco and Gino with a bottle (he hadn’t told them that he had set the wine aside), and the bubbly so impressed everyone that they decided to release it as a new wine dedicated to the estate’s founder, Giulio Ferrari. Made with 100% Chardonnay, the wine is a Blanc de Blancs (though this is not stated on the label, and neither is the category of dryness it belongs to). The 2005 Giulio Ferrari differs from some other vintages because it is an Extra Brut (it has less than 3 g/L residual sugar), which helps heighten the precision of the Chardonnay’s aromas and flavors (especially in a hot growing season). The grapes were grown in the Maso Pianizza vineyard at about 500-600 meters above sea level. 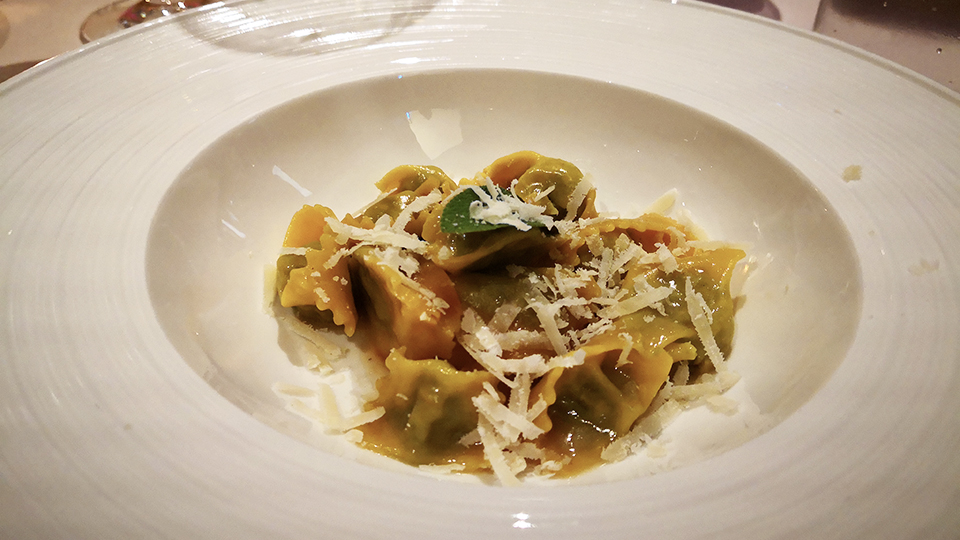 Slightly more nuanced and deeper, the 2005 Franciacorta Riserva Cuvée Annamaria Clementi is a blend of 55% Chardonnay, 25% Pinot Bianco and 20% Pinot Nero; the vines average about 13 years of age (the Pinot Bianco vines are in their 20s, the Chardonnay close to 40 years old). Blessed with laser-like acidity and very precise white peach, nectarine, lemon verbena and hazelnut aromas and flavors that linger on and on, this very complex wine is at once rich and light on its feet. I think that producers in Franciacorta have to start thinking about this iconic Franciacorta’s extremely high percentage of Pinot Bianco, when only a few other Franciacortas have a very small percentage (usually 5%, if any). In any case, the 2005 Annamaria Clementi is one of the brightest, freshest and most refined versions Ca’ del Bosco has ever made, and the less than 1.5 g/L residual sugar makes it taste like an Extra Brut and really lets the fruit shine. The secret to the 2005 Annamaria Clementi’s freshness is not explained by a simplistic analysis of its acidity values (for example, the 2005 clocks in at a pH of 3.05 and 6.15 g/L total acidity, while the much rounder 2006 Annamaria Clementi boasts very similar values: pH 3.02 and 6.1 g/L total acidity) but by the length of time spent on the lees: roughly seven years for the 2005, and more than eight for the 2006, which was also a warmer growing season. That combination of factors led to a fairly unique, remarkably well-chiseled Annamaria Clementi in 2005. 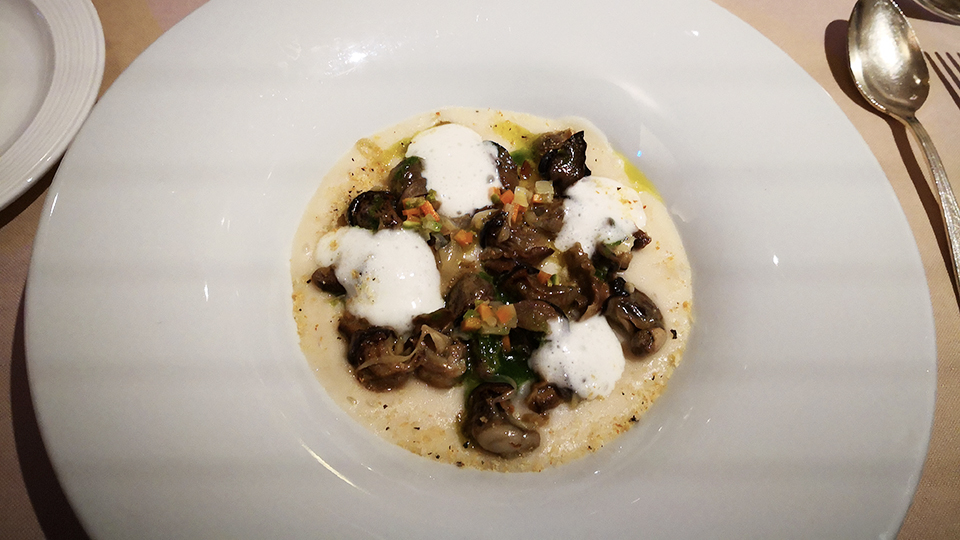 La Ciau del Tornavento is a must-get reservation for anyone seriously into food and wine. The restaurant, housed in what used to be the Treiso post office building, is beautiful, bright and spacious. Admittedly, over the years, not every dinner I have had there has gone as well as I might have liked (in those instances, it was most often service that was the problem), and I am well aware that there are those who have come away from their dining experience at La Ciau less than impressed. However, my most recent dinner at La Ciau del Tornavento was an exercise in great food, wines, and service, and in fact it is only fair to say that my last three meals there have been nothing but a smashing success. Interestingly, during my most recent meal at La Ciau (in July), a girlfriend and I were surrounded by what seemed like the equivalent of a small city of food lovers, both on the terrace and inside the dining room. A number of people also dining there that evening (for the most part, local wine producers with guests) came over to say hello during the course of the aperitif and meal. So keep in mind that this is a place you might want to go with someone you actually want to be seen and recognized with, especially in high season. But despite how incredibly packed and busy the place was on this specific night (an obviously very creative staff member had thought of sticking tables into places I would not have thought possible), service moved like clockwork. For what it’s worth, to truly revel in what is an almost magically gorgeous and great food and wine experience, make sure you try dinner here at least once in your life, but during the off-season. For example, in December, crowds are usually down; tables in the dining room are set spaciously apart, service is less harried, and the Christmas tree is absolutely beautiful to look at. But no matter when you choose to go, the chances are high that La Ciau del Tornavento will leave you smiling from ear to ear. 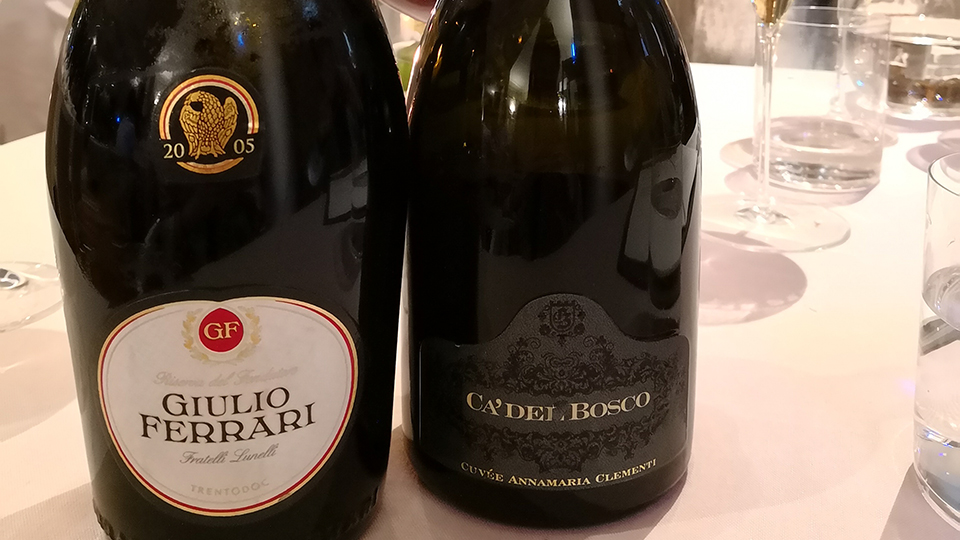