Bone marrow in the bone with herbs 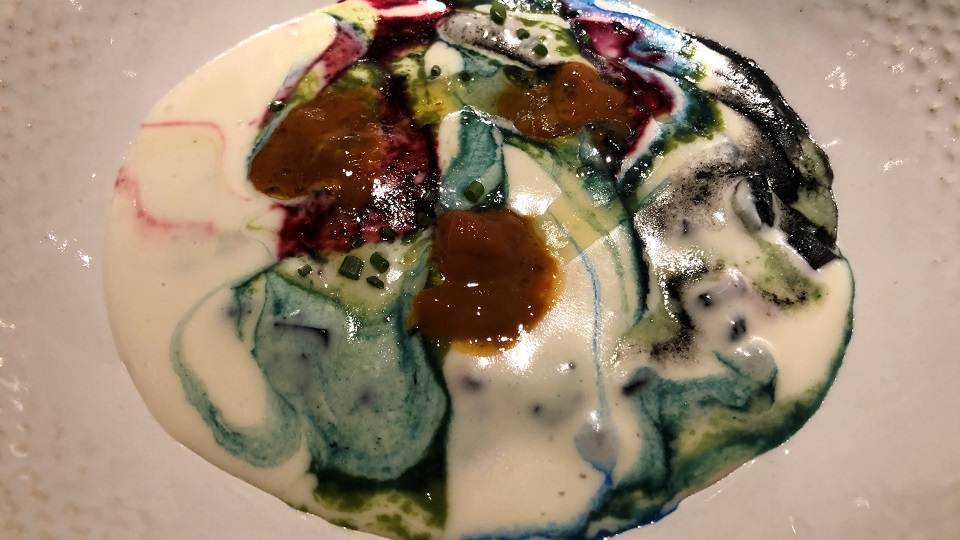 At 38 years and counting, Le Calandre is still at the top of its game. In fact, there are very few restaurants that can realistically, and truthfully, vie for the title of Italy’s best. They include Dal Pescatore, the temple to traditional high gastronomy built by the Santini family; Miramonti L’Altro, the amazingly underrated four-star eatery (because even three would not do it justice) where traditional Italian food becomes a triumph at every turn of the plate (not to mention it is the home of the country’s best – by a light-year – cheese trolley, all three of them, that is); and Osteria Francescana, where celebrity chef Massimo Bottura elevates traditional Emilia Romagna food to an art form. Any food lover worthy of his or her fork and spoon simply must get to each one at least once, for nobody in Italy does the country’s traditional regional cooking better. After which, let the sybarite voting chips fall where they may, as it’s practically impossible to choose between the three (though I have my favorite). By contrast, it’s ridiculously easy to pick Italy’s best restaurant in the “modern Italian cuisine” category: while there are countless over-hyped chefs who would like to claim that title for their restaurant, the simple fact is that Le Calandre in Veneto has absolutely no competition. It’s not even close. 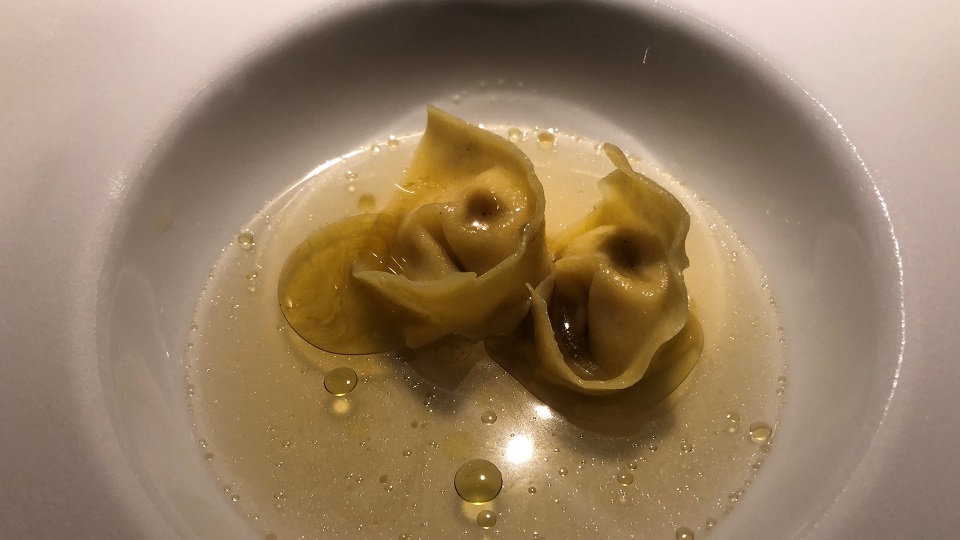 Back in 1981, Erminio Alajmo and Rita Chimetto launched Le Calandre, a small restaurant in Rubano, on the periphery of Padova, that also gave employment to the couple’s three children, Raffaele, Massimiliano and Laura. The restaurant quickly gained a good reputation among food lovers as well as accolades from newspapers and guides. By 1992 it was already a one-star eatery where many gourmets purposely stopped during their trips to Italy’s northeast (I myself used to eat there regularly on my way to Vinitaly, long before the place became the temple of high gastronomy it is today). But as good as Le Calandre was back then, things improved exponentially in 1994, when young Massimiliano took over the kitchen. His technical wizardry aside, what has always impressed me about his cooking is that you can actually eat his creations and enjoy their taste, rather than only (more or less) look at them and marvel at their cleverness, but conclude that one mouthful is more than plenty. And clearly, I wasn’t the only one getting turned on by what was on my plate. In 2002, at only 28 years of age, Massimiliano Alajmo became the youngest-ever three-star chef in the world. 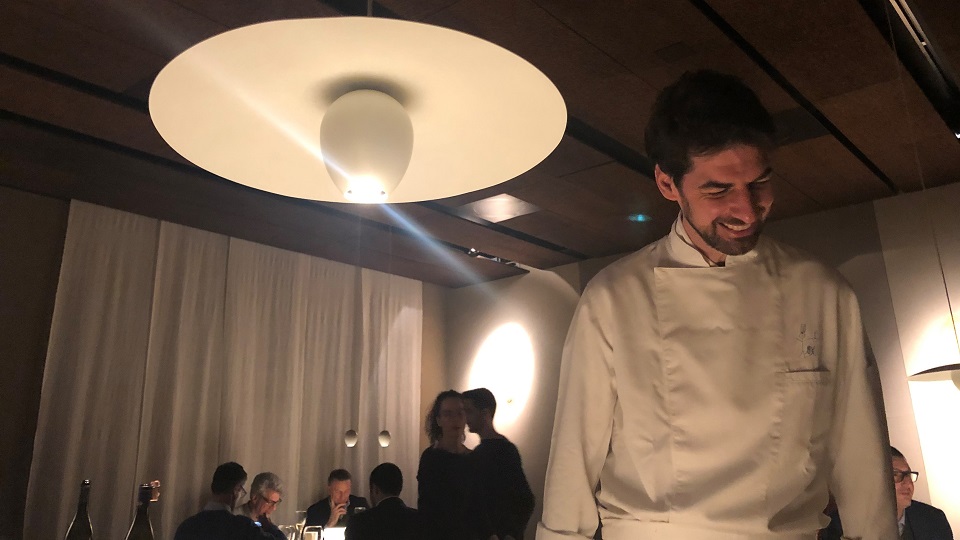 Reaching such lofty levels all on your own isn’t exactly easy; it helps when your brother is endowed with major-league business acumen. Raffaele Alajmo is the CEO of a group that today boasts 10 dining and food establishments (four are in Venice; one, Café Stern, is in Paris, on the Passage des Panoramas, a few steps from the Opera). But that sort of success would most likely have never been possible if the rest of the family had not also shared this vision for the future. Nor could it have happened without a capital infusion in 2010 (the 2008 financial crisis was tough on everyone, all over the world) from a private equity firm that allowed the opening of the new venues envisioned in the family’s long-term growth strategy. 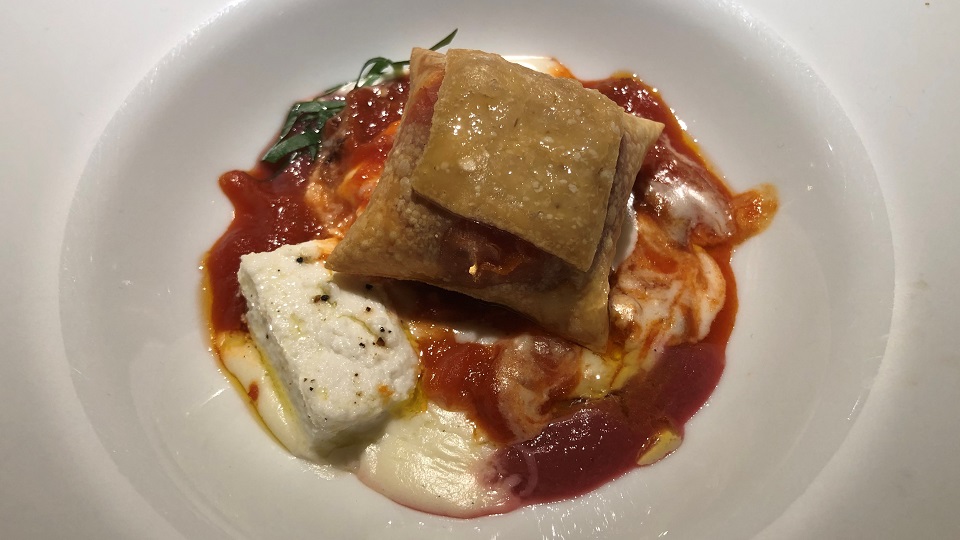 Le Calandre is the summit of the Alajmo food and drinks empire. The long, sleek, relatively dark, rectangular dining room (with a side space accommodating a few more tables) screams “modernist minimalism.” Well-appointed and spaced-out tables are illuminated by one small but very bright lamp immediately overhead. Le Calandre employs 20 people in the kitchen. The young, stylish servers (their uniforms look like something Dolce & Gabbana might conjure up) are quick, polite, and friendly, and well managed by maître Andrea Coppetta Calzavara, who has been with the restaurant for close to a decade now. Matteo Bernardi, the sommelier, is one of Italy’s most knowledgeable and modest. This all adds up to first-class service. But clearly, the food is the most important variable of Le Calandre’s very successful equation. There are three menus, which could not be more different: the “Classico,” the “Max” and the “Raf” (the latter two take the diminutive names of the two brothers). You can pick and choose between the various menus and create your own food liturgy, depending on what strikes your fancy. The “Classico” is an homage to Alajmo’s most famous dishes, such as the cuttlefish and ink cappuccino (in its simplicity, one of the greatest dishes of Italian modern cuisine) or the saffron and licorice risotto. The “Max” is characterized by dishes with a lighter, wistful touch, while the “Raf” offers dishes that are more savory and textured. To each his or her own. When I go, I invariably pick a number of items from all three menus. 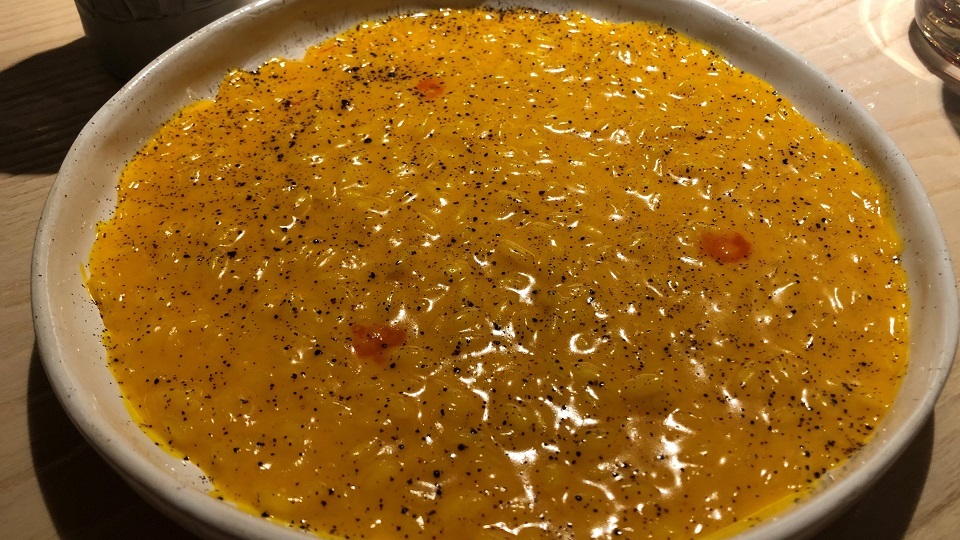 Risotto is Heaven in a dish, Italian style

And so it was on this night, too. The murrina cappuccino is a beauty to look at (it’s a different, very colorful take on the aforementioned cuttlefish and ink potato cappuccino that harkens back to Venetian glass), while the crispy buffalo milk ricotta and mozzarella cannelloni with tomato sauce is always a crowd-pleaser and never disappoints. But this evening the most satisfying dishes turned out to be the breaded sweetbreads with maispan, licorice, chicory, artichokes and aioli, and the saffron, licorice and chorizo risotto with asparagus consommé. The former dish offered interesting texture and flavor juxtapositions (for example, the plump juicy sweetbreads contrasted nicely with the crunchy chicory), but the latter was even better, hitting one high note after another; the saffron and licorice combination was outstanding, and I don’t even care much for licorice. Bone marrow eaten with a spoon directly out of the bone is a wonderful way to end the meal prior to moving on to dessert. 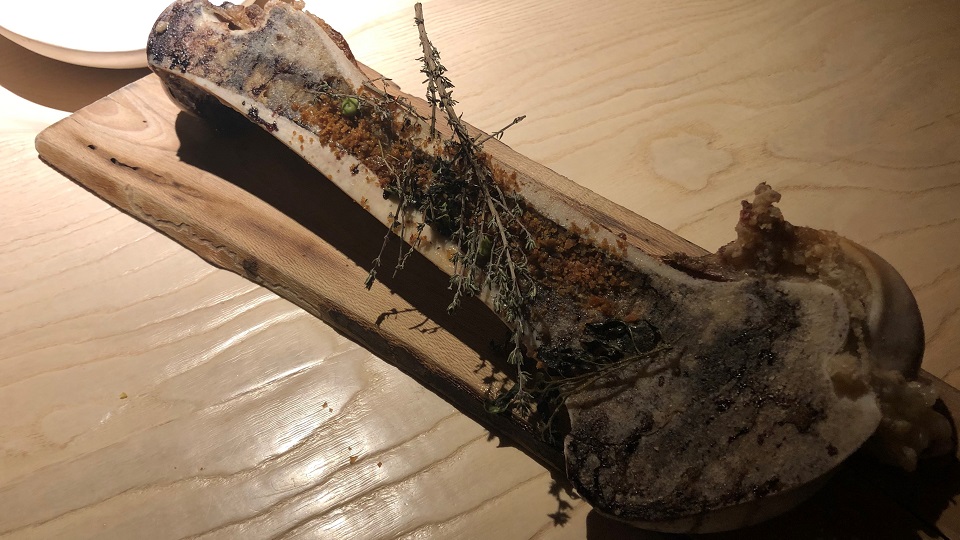 I not only ate splendidly but also drank well on my night out at Le Calandre. The 2017 Ronco del Gnemiz Chardonnay Friuli Colli Orientali Sol was a beauty, one of only a handful of Chardonnay wines from Italy that can stand up to world-class competition. Beautifully taut, chiseled and mineral, it provided a perfect start to the meal, leaving the palate feeling fresh and lifted and ready to encounter more food and wine. Proprietor Serena Palazzolo and Christian Patat of Ronco del Gnemiz are huge fans of Miani’s wines (Patat and Miani owner Enzo Pontoni have long worked together, too), so you can understand the level of wine quality we’re talking here. The 2015 Dupont-Fahn Puligny-Montrachet Les Charmes, from a little-known producer, is a likable, rather soft white Burgundy offering plenty of upfront charm at relatively modest cost. It proves well balanced and gently oaked, and does not overpower the food in any way. The 2005 Leroy Chorey-lès-Beaune, from an outstanding vintage, is drinking splendidly well and is exceptionally smooth and crammed with sweet juicy red fruit; however, there’s no real complexity to speak of, which makes its high price a little hard to swallow. Last but not least, there was the little-known 2009 Vignale di Cecilia Moscato Colli Euganei, a wine made with Moscato Bianco from the volcanic soils of Veneto’s Colli Euganei, an area perhaps slightly better known for its Moscato Giallo wine production. Located near the town of Baone, just beneath Mount Cecilia, the estate was founded in 2004 and is run by Paolo Brunello, who now rents another four hectares on top of the four he owns. This delicately sweet wine is well balanced and long on the finish, and features a nice savory touch. It’s great to see an important restaurant like Le Calandre shining a spotlight on local, small vignaioli who don’t have much media visibility or presence on the world stage. Good for Matteo Bernardi and his team of sommeliers. 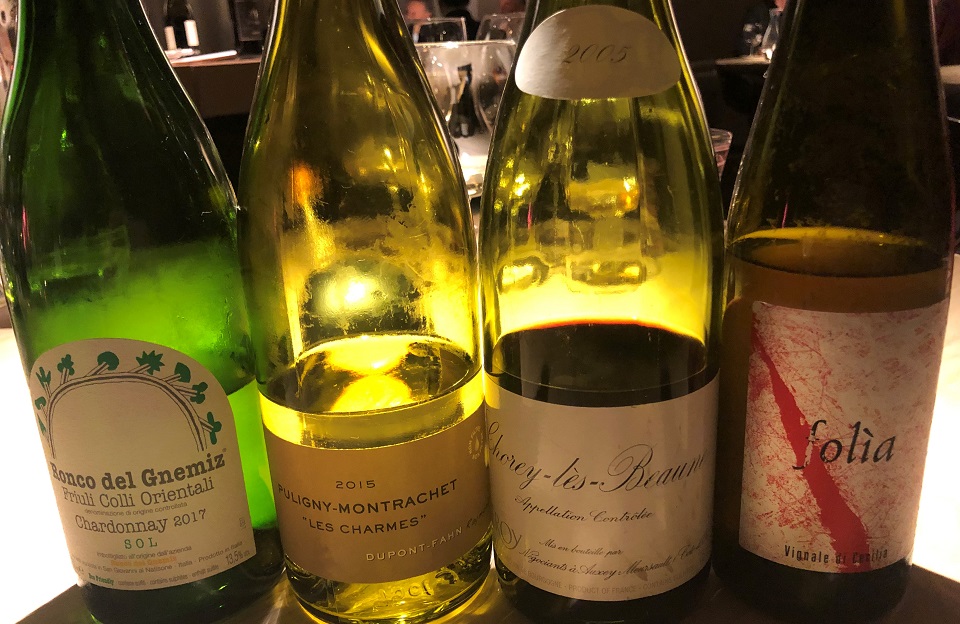 A meal at Le Calandre is well worth the time and effort. Yes, prices aren’t cheap, but then again, they never are in similar dining establishments (11 dishes, 225 euros per person; or choose three courses for 135 euros per person, four for 170 euros or five for 200 euros). At least at Le Calandre, once dinner comes to an end, you won’t find yourself regretting the expense, which is more than I can say for many other (so-called) high dining experiences I have endured over the years.