My name is Neal Martin, and I used to be a reality TV addict.

It’s a phase we all go through. Hours spent glued to the screen, fixed upon incarcerated fame-seeking nobodies doing nothing in particular for weeks on end, wondering if your ennui is greater than theirs, or alternatively, witnessing a caterwauling burger-flipper transform into the next faux Beyoncé or Bieber until their tragic dance remix of an old Leonard Cohen ballad plummets from the charts quicker than their record company can feed their contract into the shredder. They make a brief reappearance on some degrading reality show transmitted at two in the morning, clinging to the final strands of fame before the machine churns them out, back to their normal life.

Unless you are Olivier Streiff.

To be fair, in 2015, Moselle-born Streiff appeared on a reality show that at least demands skill. He became a household name on “Top Chef,” distinguishing himself not just by his culinary chops, but also by his unorthodox Goth looks, as if Robert Smith had decided to study haute cuisine instead of composing songs about death. After exiting “Top Chef” in the semifinal, Streiff opened his restaurant in Beaune under the shadow of the Hôtel Dieu, together with his wife, Nina Montchovet, the daughter of biodynamic pioneer winemaker Didier Montchovet, whom I highlighted in a recent Cellar Favorite. Le Relais de Saulx is basically a bijou two-person operation. Having visited just a few weeks after it opened, I returned for a second time last October, assuming it would be easy to get a table given the absence of tourists. On the contrary; we were lucky to reserve one of the half-dozen or so socially distanced tables and found it impossible to obtain another booking.

Was that because of Streiff’s modicum of fame or because of the food on the plate?

In marked contrast to Ma Cuisine, Streiff’s menu is a reflection of the man himself: nonconformist. And maybe this is the key to his success. Plenty of chefs try to put a twist on Burgundy’s regional cuisine and end up overreaching themselves, trying to show off their skills instead of pleasing customers. Streiff’s novel combinations of local, organic ingredients look a bit bizarre on paper, but they work. 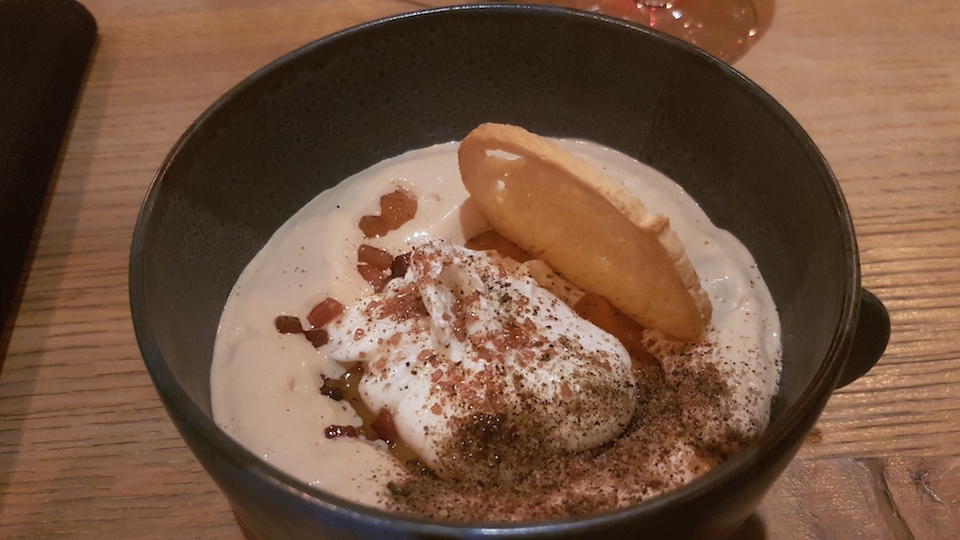 I went for the very reasonably priced (about 35 euros or thereabouts) three-course menu, commencing with the poached egg with coffee, sweet potato and tartuffon mousse, mouillette and lardons. Coffee with poached egg? I mean, I love both at breakfast, but I prefer one on a plate and one in a mug. Yet it succeeded. The coffee powder was judiciously sprinkled over the egg, and the sweet potato and tartuffon (a white truffle cream) mousse had a wonderful light consistency. It was not excessively sweet and the lardons added any saltiness needed. This was a bold, adventurous starter that instantly explained why all the tables were booked when other nearby establishments remained empty. 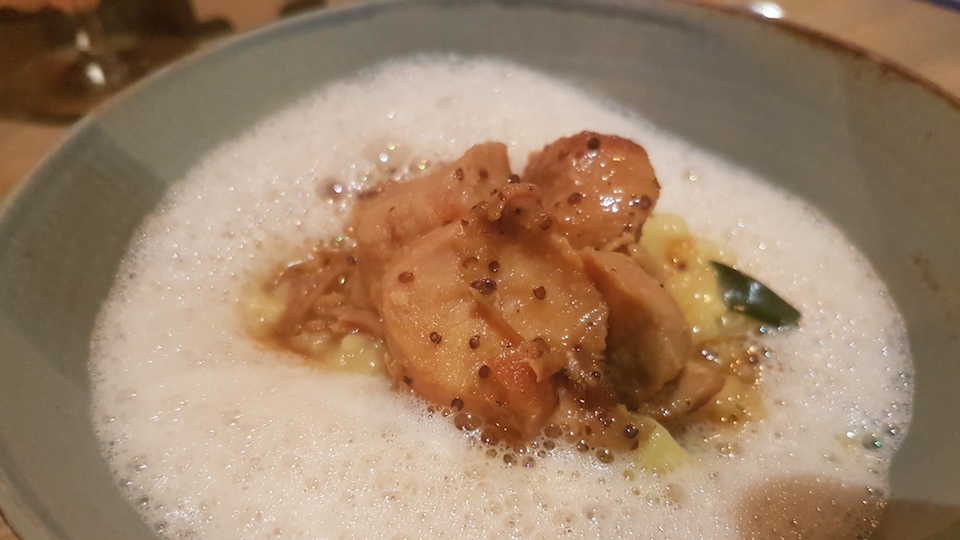 For the main course, there was curry risotto and rabbit with mustard, beer and a coconut reduction. This was magnificent. I don’t eat much rabbit these days – only when I visit Beaune, really – but the meat was lean and wonderfully seasoned. The curry risotto was delicately spiced and certainly did not overwhelm the accompanying wine; it was counterpoised by the sweetness from the coconut reduction. This dish was all about balancing flavors. My only complaint was that I was scraping my bowl clean far too quickly. 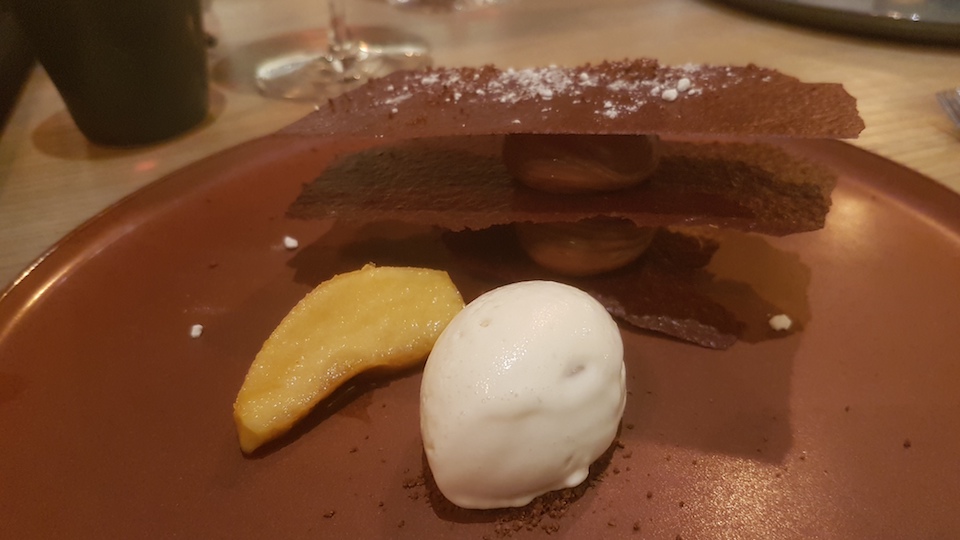 To finish, I ordered chocolate and yuzu crémeux and caramelized apple with honey sorbet. It was as delicious as it sounds. I’m a sucker for anything with yuzu, especially when mixed with dark chocolate – a killer combination. Yet again, I found the ingredients perfectly balanced, and what might have been a cloying dish in less talented hands was the perfect ending to a mightily impressive dinner. 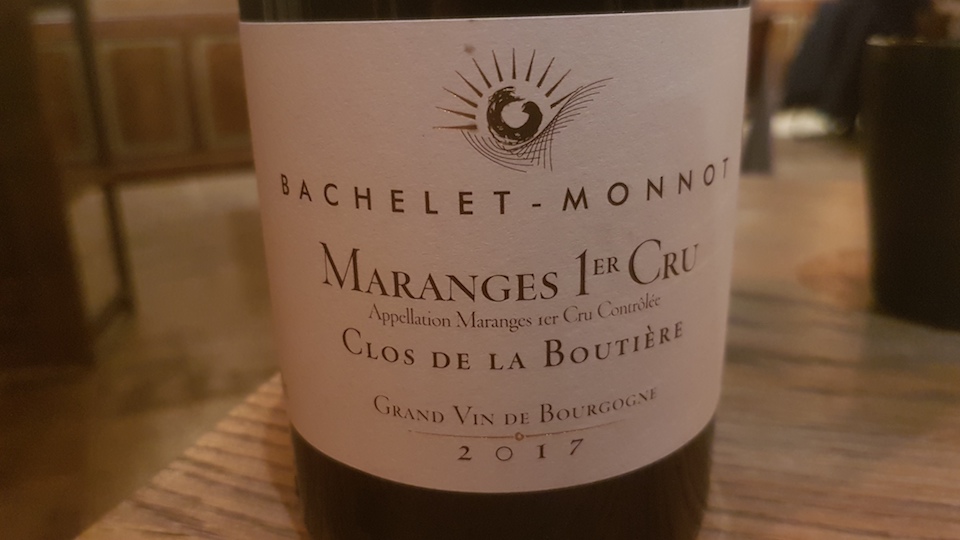 The wine list is brief but well chosen. This isn’t the kind of restaurant that stocks blue-chip names, so don’t come looking for the big guns. The selection leans toward the organic/biodynamic end of the Burgundy spectrum from less coveted appellations and upcoming growers. I chose a 2017 Maranges Clos de la Boutière 1er Cru from Domaine Bachelet-Monnot. Being a huge fan of Alexandre and Marc Bachelet, I had high expectations. This bottle surpassed them. Vivid scents of Morello cherries, wild strawberry and freshly tilled loam unfolded with confidence throughout the dinner, beautifully defined and animated. The palate is a typical 2017 Côtes de Beaune, bright, fresh and tensile with a perfect line of acidity, offering crisp cranberry, red cherry and loganberry fruit, and completed by a sapid finish that has a spring in its step, beckoning you back for another sip. Polishing off a bottle between two was not a problem. It is not a heinous crime to open this Maranges now, but give it an hour’s decant or otherwise another couple of years in the cellar.

Le Relais de Saulx served one of the best evening meals I had in Burgundy last year. I enjoyed its cozy and informal ambiance; it’s one of several recent additions to the Beaune restaurant scene that is refreshingly relaxed and unstuffy. I also appreciated the interior décor, with oversized weathered oak beams, rustic wooden tables, exposed brickwork walls and a chalked-up daily menu. Somehow it felt as if the restaurant had already been there for years. Also, the service was excellent, friendly and attentive.

It should be said that on neither occasion did I spot Streiff. He never exited the kitchen to sign autographs or pose for selfies; rather, he let his food do the talking. Le Relais de Saulx is a welcome addition to Beaune’s dining scene because while the menu is a little outré, for sure, it’s still Burgundian at heart. Streiff knows what works, and where the limits are. At the time of writing, restaurants are closed during the national lockdown, but once France reopens, I have no doubt that people will flock back. In the meantime, I presume the French are glued to the goggle box watching the latest “Top Chef,” perhaps looking out for the next Olivier Streiff.