Over the next few weeks I intend to publish a series of Vinous Tables that focus on a region close to my heart and palate: Burgundy. At time of writing, restaurants’ shutters are down and a 6pm curfew is in place. For a tourist-dependent town like Beaune, that poses a significant challenge. On the other hand, during my five-week stay last October, despite the upsurge in COVID-19 cases and step-by-step implementation of increasingly tighter restrictions, restaurants were as busy as ever. Tourists might have vanished, but the denizens of Beaune were eager to get out and socialize with another lockdown looming and even with a 9pm closing time – they are French, after all! Hungry patrons just shifted their déjeuner earlier and ate with a side order of speed.

It would be remiss of me not to commence this series at the institution I first visited on my maiden voyage to Burgundy in 1997, Ma Cuisine. Over the subsequent 23 years, there has been hardly a trip where I have not dined at Pierre Escoffier’s restaurant, tucked down a cobbled artery off Place Carnot. I cannot recall what I ordered during that first meal, but I do remember that I drank a bottle of 1990 Nuits Saint-Georges Clos de l’Arlot, an epiphany that opened my eyes to the joy of Pinot Noir.

Ma Cuisine is a smallish restaurant, around 30-40 covers, the kind of place where you are guaranteed to bump into an old friend with whom you end up sharing bottles (which now seems very COVID-unsafe). It has never been the spot for a quiet romantic meal. Instead, Ma Cuisine grew into a mecca for wine lovers who salivated over its extensive wine list, a few specials secreted away for those most deserving. Back in the days when Burgundy was a niche interest, it attracted pilgrims from all over the world, especially East Asia, ergo you had to book well in advance or face disappointment. Dinner at Ma Cuisine became a Burgundy ritual alongside posing by the stone cross at Romanée-Conti or spending half your yearly salary procuring wine books in Athenaeum. And let’s not kid ourselves: back in the day, for gourmands it was one of the only decent places to eat among the numerous tourist-trap restaurants dishing out ordinary fare for undiscerning palates.

Nowadays there are options other than Ma Cuisine, most notably the more upmarket and swish L’Hôtel de Beaune, and also Cave Madeleine, not to mention the recent arrival of L’Expression. But familiarity can breed ennui, and some of my acquaintances got a bit jaded by Ma Cuisine. The menu never really changed, and the surge in Burgundy prices means the wine list is nothing like the affordable eye-popping treasure trove of 20 years ago. Eventually it became a bit passé to mention that you were dining at Ma Cuisine. 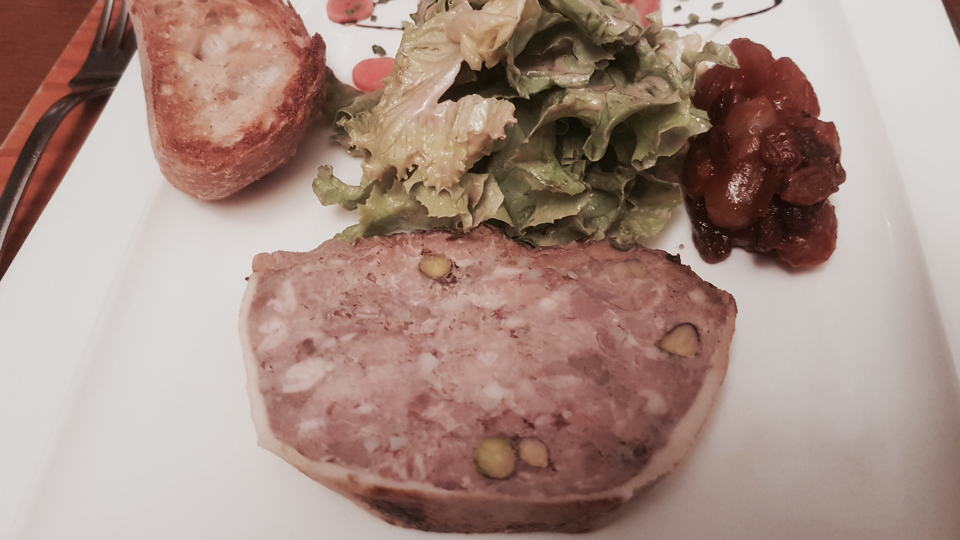 Personally, I am never tired of it, not one bit. I cannot recall a single disappointing meal. And you know what? I don’t want the menu to evolve. I appreciate traditional Burgundy fare because it is nigh impossible to find here in the UK your oeufs en meurette, beef bourguignon or chicken with morel sauce. When I am spending all day tasting, I don’t want fancy food or Michelin stars; I crave something simple, hearty and delicious.

During the first week of my most recent trip to Burgundy a friend from Bordeaux asked to meet up, and I suggested Ma Cuisine. This was Tuesday, probably the quietest day of the week, and still it was quite a shock to open the doors and not be smacked in the face with a warm, convivial atmosphere and a hubbub of noise. Ma Cuisine was empty – a sign of the times rather than a reflection on the restaurant. I took a seat at the corner table. My friend was coming down on the TGV from Paris and running late, so I resisted the temptation to polish off all the obligatory gougères and typed up a few of that day’s tasting notes until she arrived in her usual blaze of glorious color. 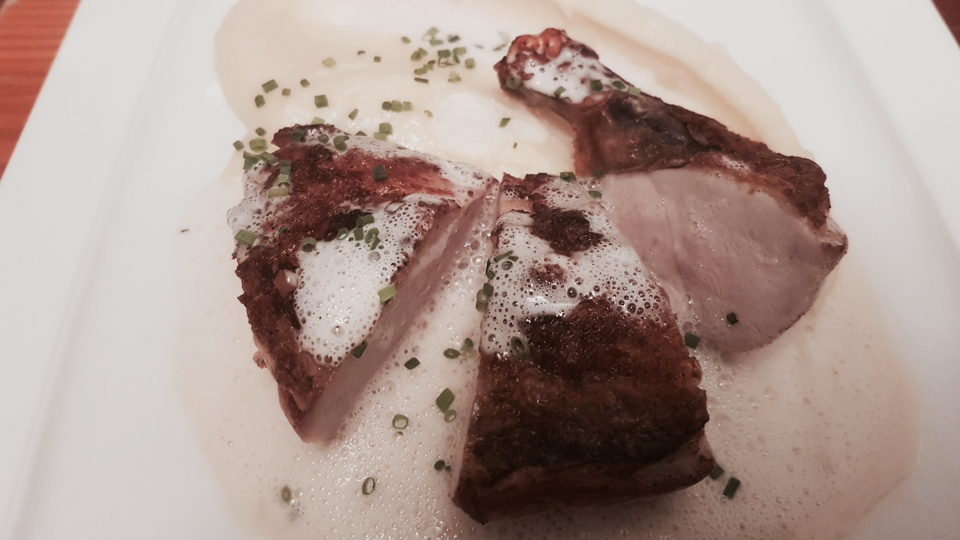 I knew exactly what I wanted to eat. I started with the rabbit terrine. The rabbit was packed full of flavor, peppercorns imparting that touch of spice, the side of tomato chutney tangy and just perfect. Nothing spectacular, but I could easily gulf down another.

For the main course I ordered chicken breast with a vin jaune sauce and creamy mashed potato. I know, I know. It’s not going to challenge El Bulli for culinary art and it won’t have Thomas Keller losing sleep. But it filled my tummy after a hard day’s work at the coalface. As always, the chicken was tender and moist, the vin jaune sauce perfectly seasoned with just the right amount of sharpness, as you would expect from an establishment that has been serving this dish since time immemorial. The potato probably contained far too much butter for my dietary regimen, but I could not resist. 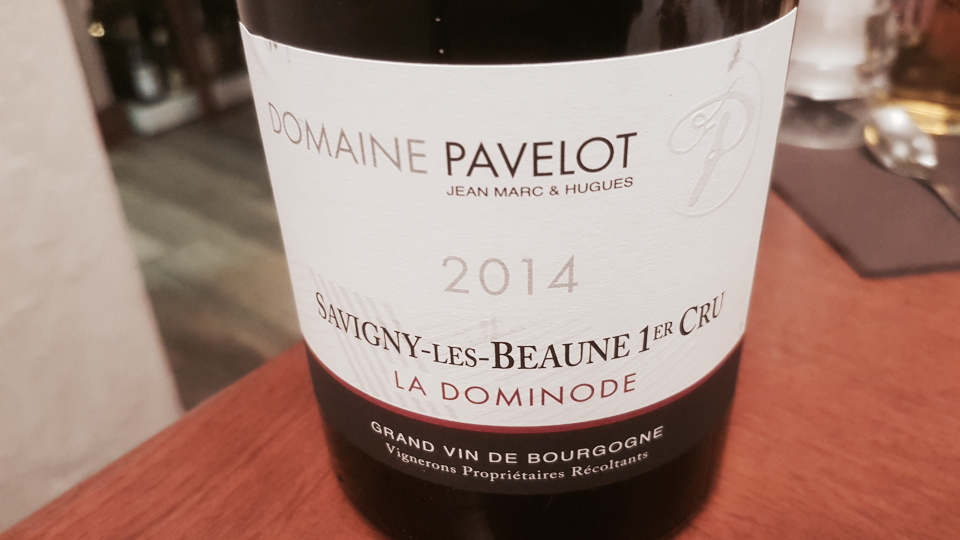 If this does not make for a riveting Vinous Table, then no apologies, because if you dined at Ma Cuisine, this is exactly what you want to eat. For once I didn’t need pudding. Instead, we gossiped like there was no tomorrow and drank a bottle of 2014 Savigny-lès-Beaune La Dominode 1er Cru from Domaine Jean-Marc et Hugues Pavelot. This example did not quite deliver as I expected, being, I suspect, in a bit of a dumb phase. It just lacked a little presence on the nose, coming across angular and unable to settle, the stemmy element dominating too much for my liking (and this from someone who loves whole-bunch addition). Likewise, the palate missed the charm that it exuded when I originally tasted it from barrel. My advice would be to leave it for a couple of years to exit its sulk.

Throughout the entire evening we were joined by just one other couple. My friend managed to fill a silent pause with a burst of opera that I’ll hazard a guess was audible back in Bordeaux. The cooking was exemplary as always. Beaune would not be Beaune without Ma Cuisine. For sure, I missed the atmosphere that makes Ma Cuisine what it is, but it will return with flocks of customers once COVID-19 is in the rearview mirror.

Next up, a restaurant located just around the corner from Ma Cuisine, but with a modern twist on regional cuisine…