This recent dinner at Marea marked a return of sorts to dining out in New York City and getting together with friends with a bit more peace of mind than in the prior months. It was the first dinner for this group since COVID. It felt great to be back at Marea, seated in our usual corner table with all of our bottles, tucked as far away as possible in order to not disturb patrons enjoying a nice night out in town. Wine Director Francesco Grosso took care of every detail of service with his typical aplomb.

It’s always special to walk into this space, which was a temple to Italian wine and food before the Marea days, when Tony May operated his iconic San Domenico here. Michael White and his Altamarea Group transformed the location into Marea in 2009 and instantly created a New York City classic that is consistently packed. White has since moved on, but the team led by Executive Chef and Marea veteran Lauren DeSteno has not missed a beat. Three dinners over the last year have all been terrific. 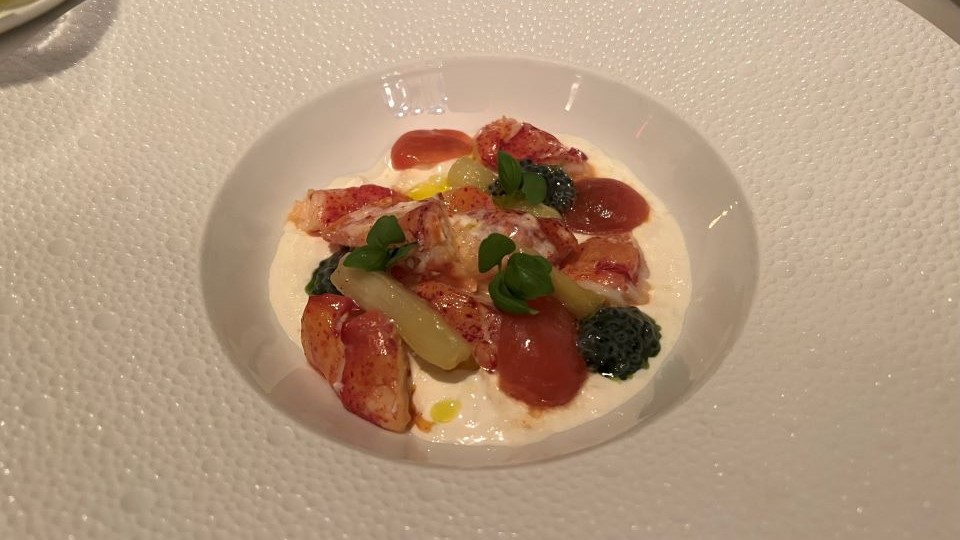 I decide to go with the Marea classics, the dishes that really made the reputation of the restaurant in its early days. There is something cathartic about this evening, and I really crave that food. The Nova Scotia lobster and burrata appetizer is delicious. My only critique here is that it is served too chilled, which really mutes the flavors and takes out all the lustiness of what really is a terrific combination. The fusilli with octopus braised in red wine and bone marrow is fabulous. My serving is pretty large, but I am not complaining. The pasta is cooked perfectly, with the twists of the fusilli capturing all of the natural goodness of that sauce.

The Dover Sole is very good. But it could have been great. Personally, I would prefer to see Dover Sole deboned at the table. I think that might help keep the meat a bit moister and also help the presentation. I don’t have a huge sweet tooth, but there are a few things I absolutely can’t resist. Bomboloni is one of them. Marea’s are divine. 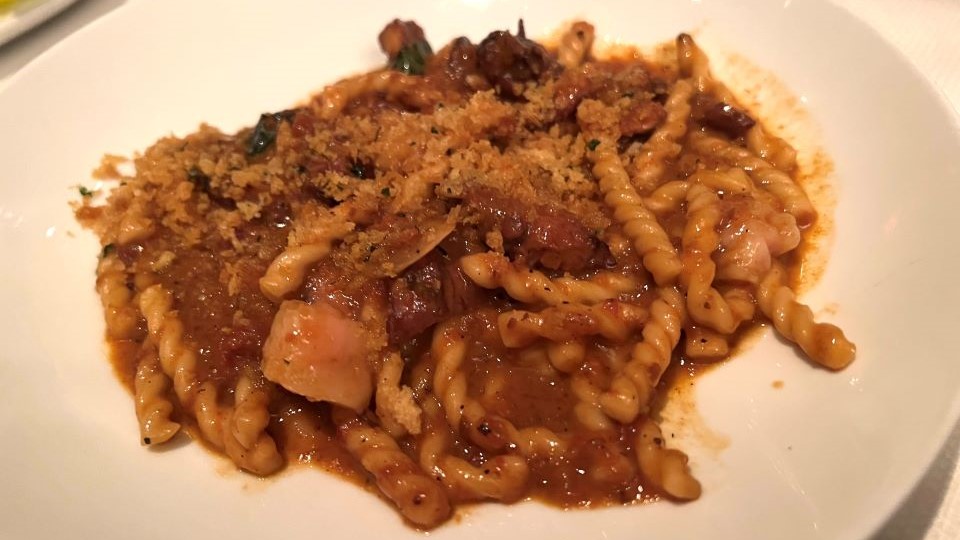 Roederer’s 2002 Cristal, from magnum, is just off the charts. What else is there to say? The magnum format is so well-suited to Champagne. As opposed to still wines, which are just aged in glass, for Champagne, the secondary fermentation takes place in the glass. I am convinced that is a major part of what makes Champagne from magnum (or larger) often so compelling. The texture, breadth and overall pedigree here is just remarkable, with layers of apricot, spice, dried flowers and citrus confit that continue to build over time. The 2002 is neither old nor young; it is quite simply eternal. What a great way to start the night. Wow!

Our first white of the evening, the 1999 Puligny-Montrachet Les Folatières 1er Cru from Domaine d'Auvenay is quite rich and heavy. Scents of crème brulée, apricot, chamomile and spice, along with slightly oxidative notes, are all signs of a wine that is fully mature. At twenty-three years of age, for any other grower, I would conclude that the 1999 is simply mature, but not necessarily premoxed. But for Lalou Bize-Leroy, whose whites typically age gracefully for decades, this is not a great showing. Whether that is attributable to the wine itself or to other conditions such as shipping and or storage is of course impossible to know. 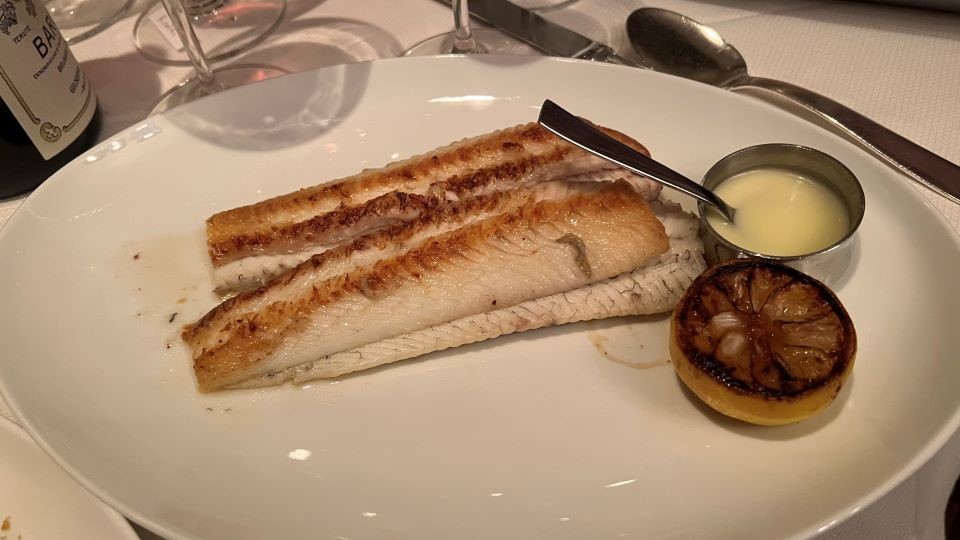 Coche-Dury’s 2010 Corton-Charlemagne Grand Cru really needs a few hours to open. Several recent bottles (don’t kill me for that) suggest the 2010 is starting to head into the early part of its first plateau of maturity, the stage where some of its youthful angularity starts to soften, the textures open and the aromatics become more expansive. If I had multiple bottles (I don’t) I would wait on the 2010 and let it settle a bit more. It is very clearly a magnificent, special wine. Another stellar 2010, the Meursault Charmes 1er Cru from Domaine Comtes Lafon is off the charts. What a wine. This is an especially great, great bottle. Then again, I bought it on release in France and brought it back to US myself. Vibrant and chiseled, the Charmes captures all the magic of a vintage marked by low yields and bright acids. Citrus, white flowers, mint, slate and crushed rocks race across the palate, building into the intense, mineral-stained finish. Magnificent. Sadly, I can’t say the same thing about Lafon’s 2010 Montrachet Grand Cru. It shows good depth and power, but is also more advanced than it should be. Again, trying to understand the ‘why’ is not easy. Our flight of whites concludes with the 1990 Coche-Dury Meursault Perrières 1er Cru, a gorgeous wine for readers who enjoy white Burgundy with bottle age. Now gently softened by time, the 1990 offers up a compelling mélange of apricot, dried flowers, chamomile and light caramel touches. I love the richness and weight. 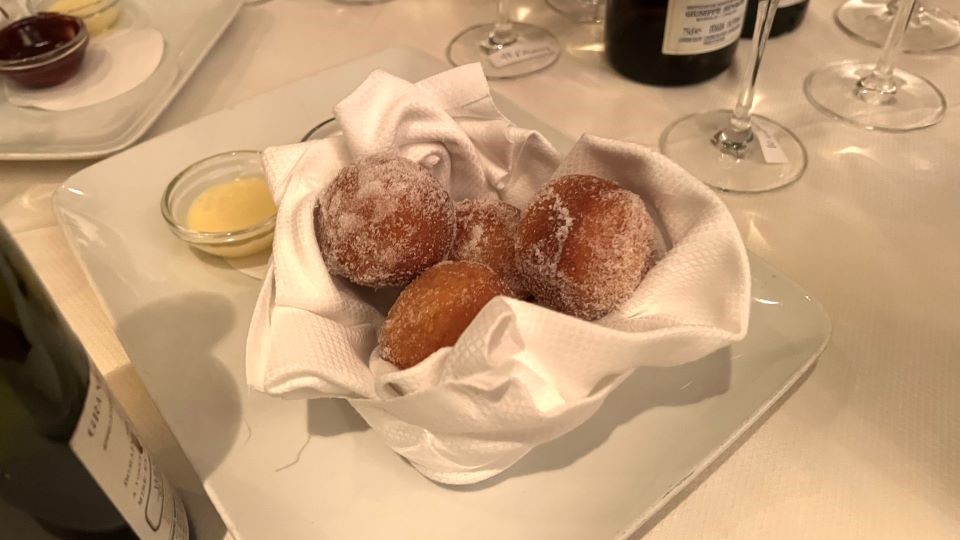 The 1990 Grands Echezeaux is one of my very favorite Domaine de la Romanée-Conti wines. Always a bomb, the 1990 is damn delicious. The bouquet alone is so alluring. Bright red-fleshed fruit, crushed berries, spice and mint fill out the layers in a gorgeous, wonderfully expressive, open-knit GE that is an absolute thrill to drink. When it is on, and that is most of the time, the 1990 is lights out. This bottle is tremendous. What a great way to move into the red wines. Beppe Rinaldi’s 2008 Barolo Riserva Brunate is quite the surprise. Marea’s Wine Director Francesco Grosso emailed me earlier in the day to let me know that the bottle that I had delivered had the “Le Coste’ crossed out. That could only mean one thing. That the 2008 was a very rare bottle of the pure Brunate Riserva made only for the family and a few close friends, one of whom I happen to know. These are such rare wines, and I was so excited to drink the 2008. Captivating Nebbiolo aromatics soar out of the glass. Translucent and nuanced, with striking delineation and inner sweetness, the 2008 is simply magical. It is one of the very finest Rinaldi Barolos I have ever tasted. It’s vibrant, and the energy will ensure several decades of fabulous drinking.

The 1989 Haut-Brion is very, very good. All the telltale Haut-Brion signatures of dark fruit, minerals, herbs, gravel and spice are present, but this bottle is lacking the textural opulence and depth of the best examples. Readers who have had the 1989 know what an epic wine it usually is. Sadly, the 1961 Margaux is beset by strong notes of game and brett that dominate. There’s good depth for the 1961, but things never fully come together. I expected more. 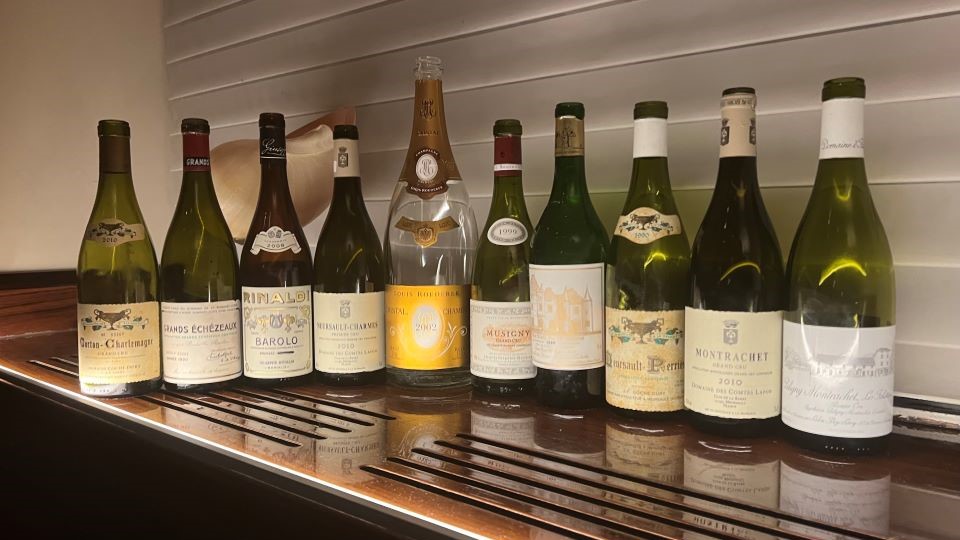 A spellbinding bottle of Mugnier’s 1999 Musigny Grand Cru rounds out the evening. So complex and beguiling, the 1999 is at once light on its feet and quite deep, with terrific freshness and breathtaking balance. Aeration brings out further layers of dimension. The 1999 is at times quite cerebral, while in other moments it is more overtly virile. Like all truly great wines, every taste reveals a different facet of its personality. What a thrill it is to drink this with a group of my closest friends.

As great as the wines are, I am once again reminded that wines are made special by context, in other words the circumstances, places and people that surround them. This was a truly unforgettable night of food, wine, friendship and camaraderie. Until next time…