I enjoy the run-up to Christmas more than the day itself. I am surely not alone in that opinion. Anticipation builds to a point whereby Christmas Day never lives up to expectations. You spend all day unwrapping unwanted gifts from forgotten relatives, putting the lumpy gravy through reverse osmosis, avoiding civil war over the Monopoly board and snoozing in front of the TV because you overdid the cheap Prosecco at breakfast. Despite all that, I still experience a palpable sense of excitement throughout December. During the last run-in, I threw caution to the wind and dined out as much as humanly possible, accepting my fate if I did end up catching the virus. Thankfully, I got to the end of the month unscathed. One of the most pleasurable fixtures in the calendar was a bacchanal held at Noble Rot restaurant. Friends and I gathered upstairs at the fully-packed Soho branch to celebrate the fact that we could celebrate, pull a few crackers, talk rubbish, tuck in to some tasty grub and share decent vino. And this year, the vino was extremely decent.

Co-owners Dan Keeling and Mark Andrew arranged a festive menu. As usual, the dishes were simple, on this occasion, intentionally “old school” and utterly delicious from start to finish. The signature choux bun with duck liver parfait and Tokaji jelly were obligatory, melt-in-the-mouth gorgeous and probably undid the good work of all those 5km Parkruns over the last few months. They are irresistible and limiting oneself to a single mouthful is not easy. Fortunately, the first course of dressed crab with herbs was much healthier. This was delicately seasoned, allowing the subtle flavours of crab to shine through. I’m not a massive fan of crab to be honest, but I could not complain about this. 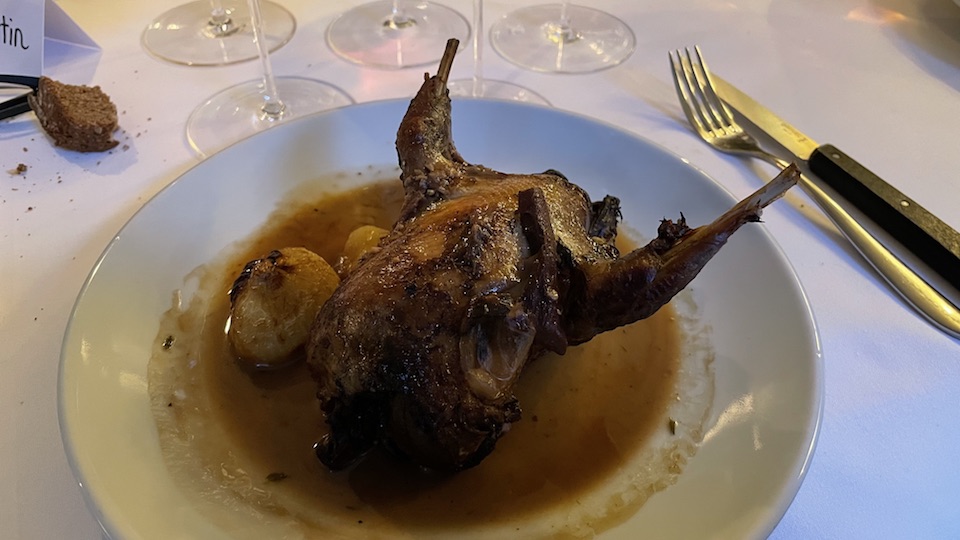 The second dish was a homage to the great, and I would argue, under-appreciated British chef Robert Carrier. He was hugely influential, particularly with his 1967 recipe book “Great Dishes of the World”. The peripatetic Carrier introduced not just French, but also Moroccan and Chinese cuisine to the Britain’s meat ‘n two veg gastronomy scene. His pâté aux herbes was one of his trademark dishes, and this was beautifully prepared.

For main, what could be more seasonal than partridge? No pear tree was included, rather it was served with Porcini, braised in red wine with potato and celeriac torta. Partridge is one of my favourite game birds and perhaps plays second fiddle to grouse in the minds of some gastronomes. Maybe it’s too synonymous with Christmas, like goose? This partridge was cooked to perfection, pink and moist inside and with just the right amount of crispness on the skin. I wondered, why we don’t eat this more often?

Following a selection of cheeses, most of the party wisely peeled away home. Stomach pump and carriages were stated on the menu – fortunately we had need for the latter, not the former. After jabbering away and finishing the dregs of the bottles, we saw it fit to order a round of white truffle tortellini to soak up the vino and make sure we returned to families with some semblance of sobriety.

Let’s move on to the fermented grape juice. These were proffered by attendees, and what a fabulous group of wines they turned out to be. There was no set theme, though by chance it ended up focusing mainly on Burgundy and Rhône. The libation actually commenced with two vintages of Cristal, 1995 and 2002, though I was too busy chatting to take any notes. 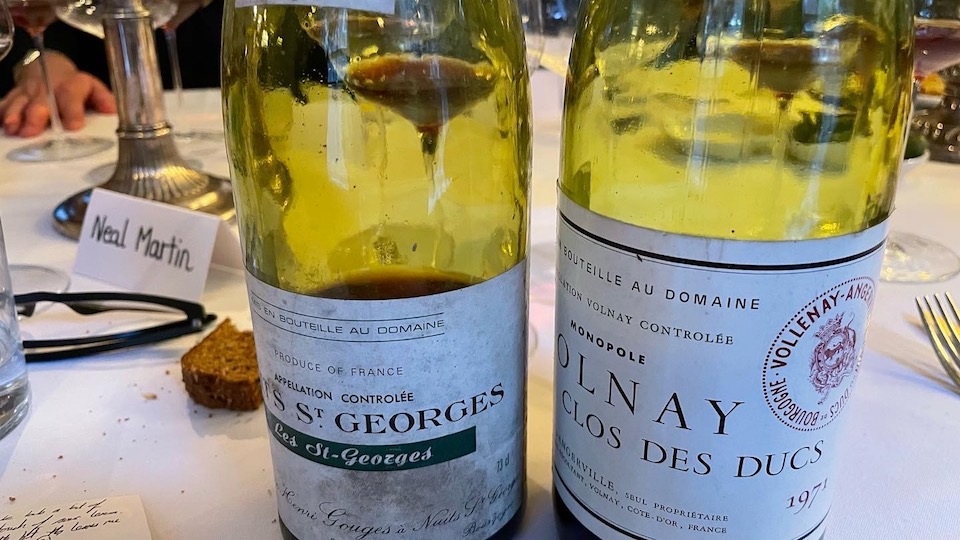 The whites began with the 2004 Chablis Montmains 1er Cru from Domaine François Raveneau. This has a light waxy bouquet with scents of white flowers and Japanese yuzu. A saline influence becomes noticeable with time. The palate displays satisfying weight, though I feel this lacks a bit of tension. Lime and sour lemon surface towards the finish. There is fine length, but you got the sense that the growing season shaved off the élan that great Raveneau has in spades. Apropos my own contribution, well, I took a chance, a chance that paid off. The 1982 Meursault Charmes 1er Cru from Domaine Buisson-Batault is an absolute gem. Old bottles from this less well-known producer have punched well above their weight, and this was another. Lucid straw in colour, it has a captivating nose with impressive concentration for the vintage with scents of dried honey, lanolin, beeswax and wax resin. It’s everything you want in a mature white Burgundy. The palate was finely tuned with a silver bead of acidity, taut and fresh with much more tension than you would expect. This is hard to find, though probably cost a fraction of the amount you paid for that 2020 white Grand Cru a few weeks ago. The third bottle was the infamous 2002 Saint-Véran Terres Noires Atom Heart Mother from Verget: Jean-Marie Guffens’ tribute to the prog rockers. This was similar to the previous bottle with its yellow flower and orange blossom nose, perhaps this example a little more honeyed. The palate is rich and packed full of flavour, exhibiting what feels like some botrytis and that irresistible lychee finish. Lovely. 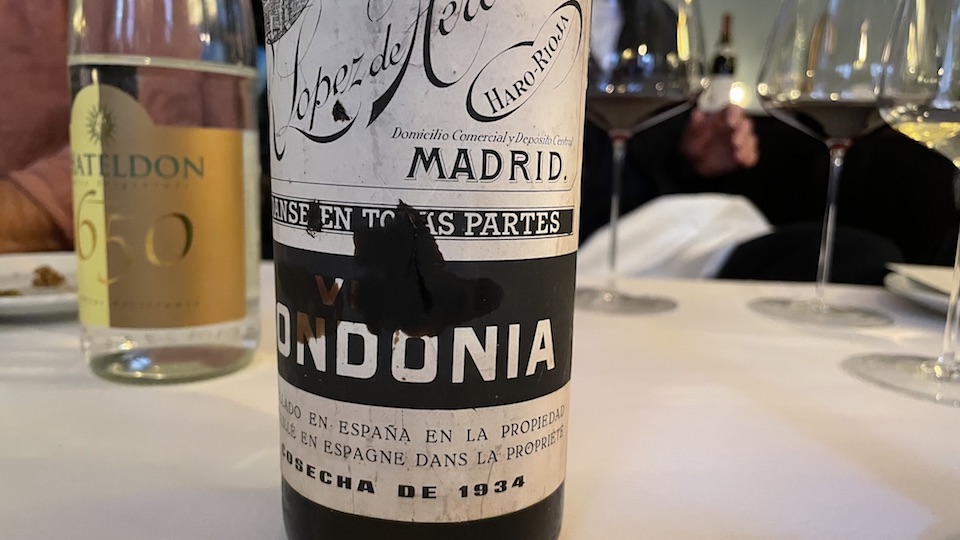 The red flight began with two bottles of the 2002 Chambolle-Musigny Les Amoureuses 1er Cru from Domaine Joseph Drouhin where one showed better than the other. A fragrant bouquet with dark cherries, fig jam, black plums – all quite rich, almost decadent for a 2002 Côte de Nuits. The palate is well-defined with a slightly leathery entry. Plump and generous, this is a sensual Les Amoureuses, though as I mentioned, the second bottle demonstrates a little more precision and earthiness. The 1971 Volnay Clos des Ducs 1er Cru from Domaine Marquis d’Angerville is a mature red Burgundy that I have been fortunate to encounter a couple of times before. This was consistent with those previous notes. It has a ‘contained richness’ on the nose with ethereal mulberry and strawberry notes, this bottle with a little more kirsch than previous ones. Disarmingly pure on the palate, it offers lace-like tannins that frame the fleshy red fruit bound with dried orange peel, hints of brown sugar towards the poised finish. This continues to cruise at high altitude. The 1971 Nuits-St-Georges Clos des Porrets 1er Cru from Domaine Henri Gouges is another that I have drunk before. This is perfumed on the nose with light red fruit; this bottle is more ferrous and more rustic than the previous one. The palate is well defined with intense red cherry fruit and some volatile acidity towards the finish that just feels a little drier than the best examples that I have encountered. Not the best bottle, but a lovely mature 1971. I was eagerly anticipating the 1971 Morey-Saint-Denis Clos de la Bussiere 1er Cru from Domaine Georges Roumier, but this was dead as a doornail.

The next bottle was simply labelled “Mystery Wine” on our menu. It was an absolute stonker. Such was its precocity that nobody got within a mile of its true age, though it was clearly of Spanish origin, and my neighbour nailed the producer, which in retrospect was obvious. The 1934 Viña Tondonia Gran Reserva from R. Lopez de Heredia is deep in colour with a light russet rim. The bouquet is a potent cocktail of kirsch, candied orange peel, inkwell and just a slight acetic/nail varnish tincture. You feel it is teetering on falling apart yet never does. The palate is beautifully balanced, plush and decadent, surely with a boatload of VA, yet sweet and pure on the finish. Zingy orange zest lingers on the aftertaste. Stunning. 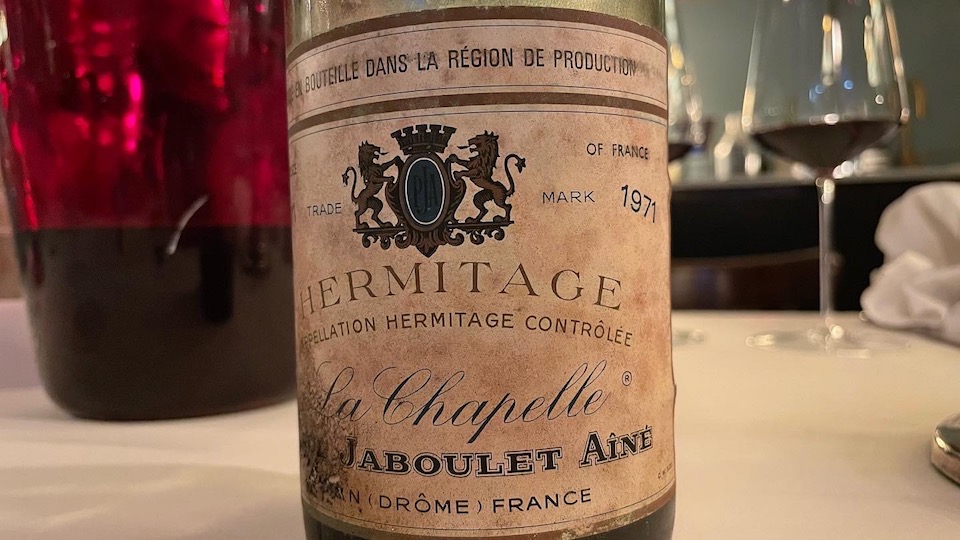 Next were three legendary Rhône wines. The 1971 Hermitage La Chapelle from Paul Jaboulet Aîné is a vintage that I had not tasted for a decade. This is a reminder of Jaboulet’s purple patch throughout the Sixties and Seventies, decades bejeweled with wines that continue to show brilliantly after half-a-century. It has an absolutely bewitching nose with precise red fruit, peppermint and camphor, vivacious and focused, constantly gaining intensity in the glass. The palate has a velvety-like texture, moderate acidity, utterly harmonious with layered piquant red fruit interlaced with Provençal herbs and a light minty note on the finish. There is a quasi-Burgundy allure about this Hermitage, and I could have drunk it all night. The 1976 L’Hermitage from Domaine J-L Chave comes from an era when conversely, the estate was not quite firing on all cylinders, as it did in decades before and after. It has a distinct chlorine-tinged bouquet, quite intense and becoming more floral, a touch of singed leather emerging with time. The palate has adequate, quite sweet plummy fruit, a bit soft around the edges with a melted quality on the finish. I suspect bottles should be consumed in the near future. Drink soon. 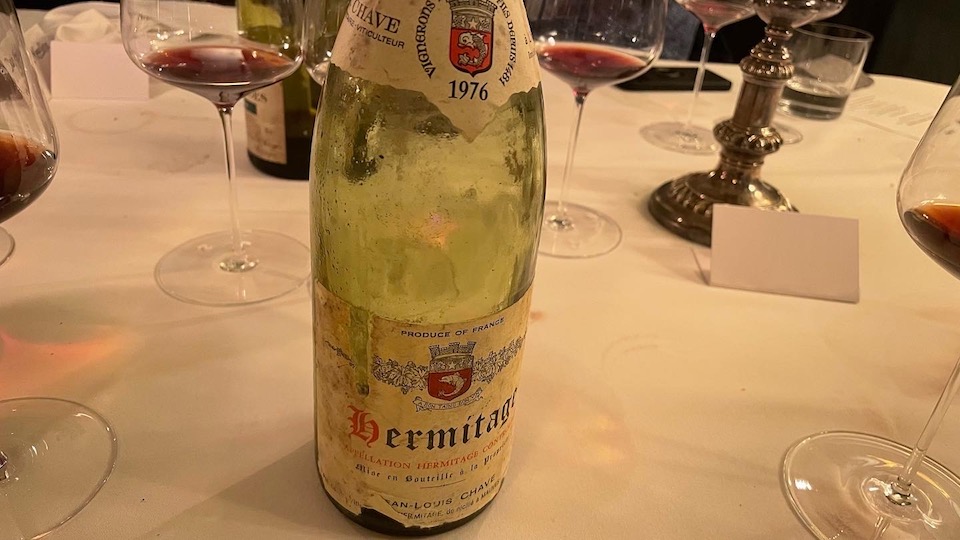 The 1981 Châteauneuf-du-Pape from Château de Beaucastel is famed for its brettanomyces, though I discerned it being less apparent on this bottle than others. Singed leather, hung game and black pepper unfolds on the attractive nose, then a scent of an old pair of plimsols that you forgot to throw away a few years ago. The palate is plump with some VA, yet somehow balanced with a liquorice tinged finish. It’s a wine that has always worn its faults with pride, and you cannot help but fall for its charms. 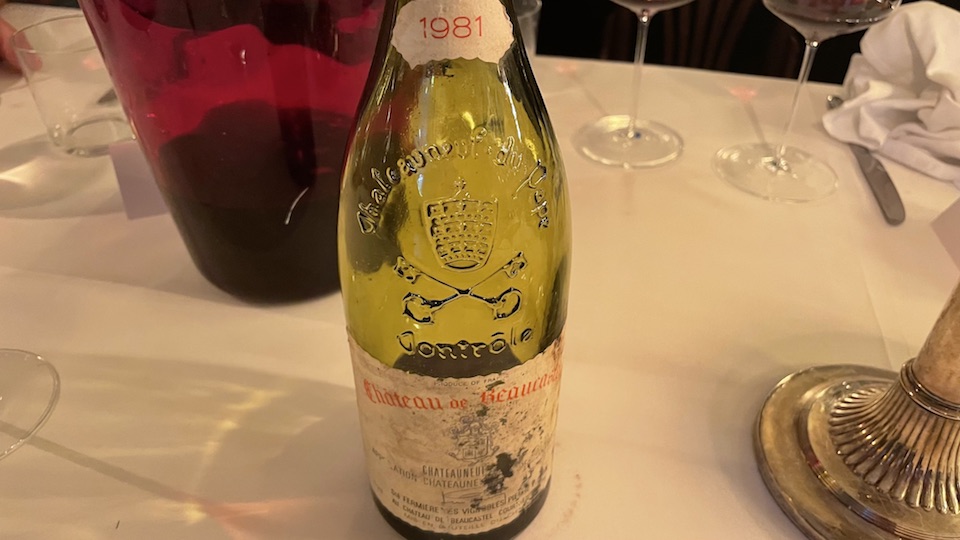 By now, some members of our festive party were peeling away, but I stayed to the end when a bottle of Pauillac was opened, as if we had not drunk enough already. The 1966 Pichon-Comtesse de Lalande has never really been my favourite vintage from this era. Mature on the nose, it offers vestiges of black fruit, cedar and tar, a little dried out, tea leaf emerging with time. The palate is rustic and a bit rough-edged though there is some freshness coming through on the finish. Not bad, but I always preferred the 1961 or 1970. 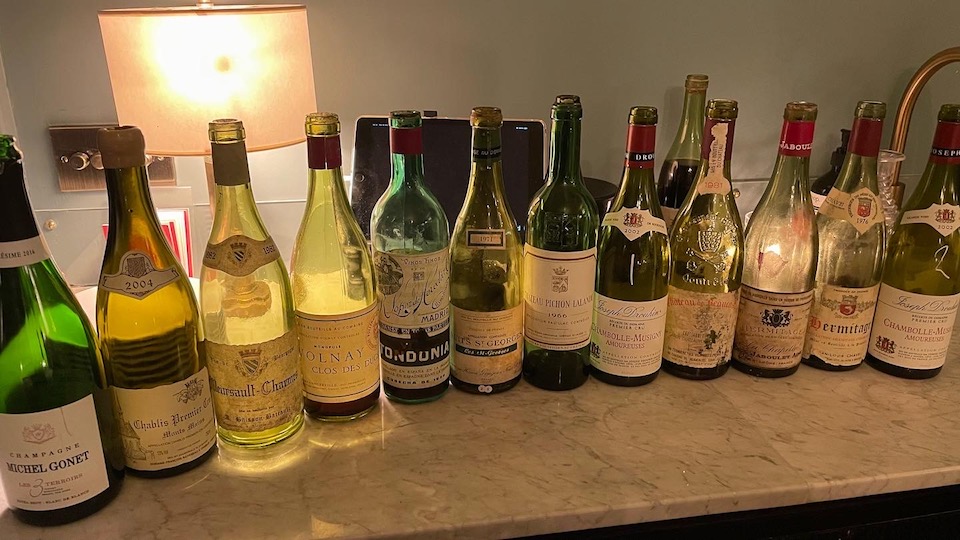 It had been a long and bibulous afternoon, one that reignited my love for mature Rhône and ancient Lopez de Heredia. Walking back through the busy streets of Soho, quieter than it normally be at this time of year, I still felt that tingle of excitement thinking of Christmas edging closer. Santa was oiling his sleigh up in Lapland, managing his elves and giving his reindeers the itinerary for the big night. Maybe I don’t believe in Santa as I did when I was child, but I do believe in celebrating Christmas with fine wines and company like this.