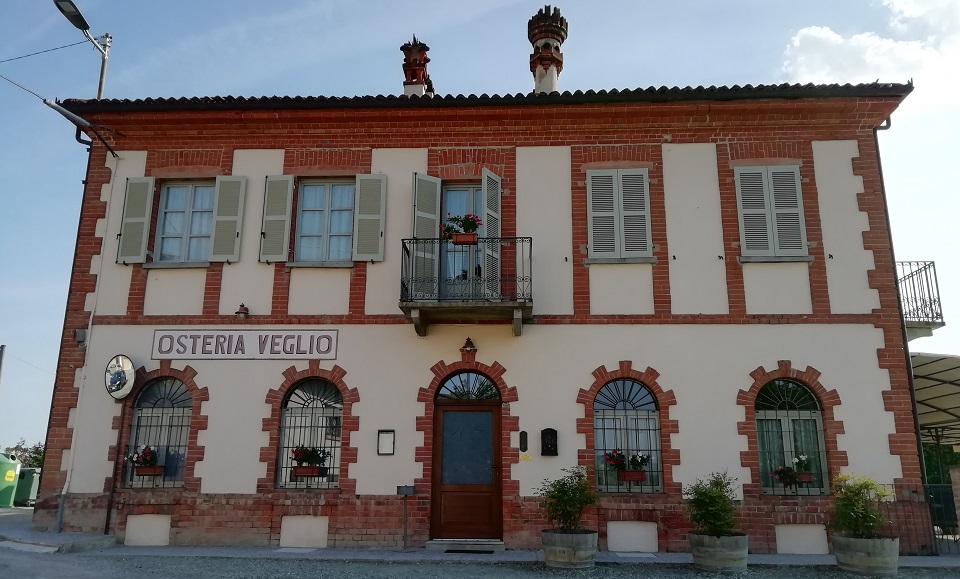 
There is a lot to like about Osteria Veglio: the location (in La Morra’s bucolic Annunziata neighborhood), the cleverly refurbished interior of an already charming old country school building, and the terrace overlooking a beautiful Langhe panorama, a truly magical spot for a late spring or summer dinner. 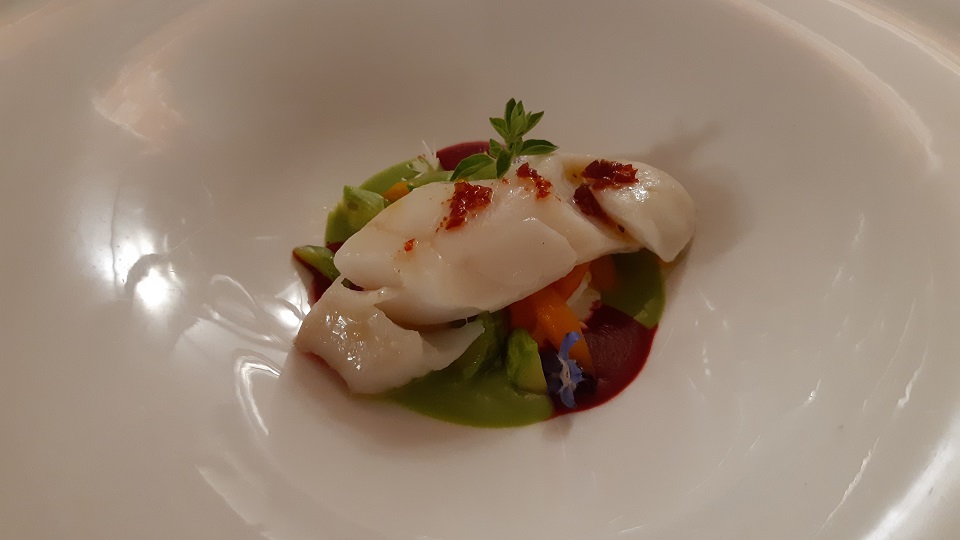 This country restaurant is now run by two couples who took over in 2006. Emanuel Marengo and Massimo Corso are the chef, while Cristina Dalzotto (wife of Massimo and sister of Emanuel) and Caterina Zahn, Emanuel’s significant other, run the front of the house. The two chefs have serious culinary training under their belts. Emanuel worked as Ugo Alciati’s sous chef at the Villa Reale in Serralunga d’Alba, while Massimo was previously the chef of the once highly touted La Libera restaurant in Alba. The women have similarly impressive resumes, as they also plied their trade in the same two restaurants where their husbands cooked. Just think how society has changed over the centuries: now it’s the men who cook while the women are out in the dining room talking to the guests and running the show. 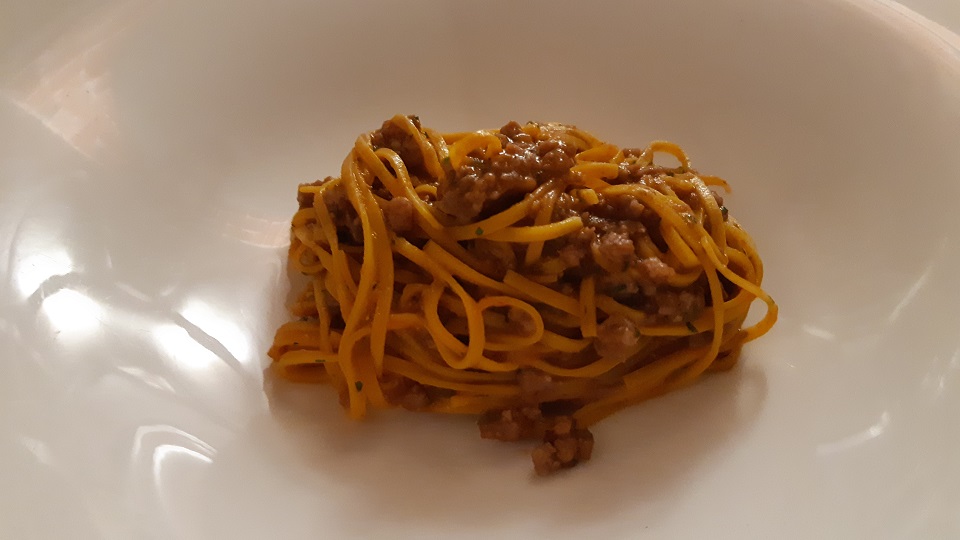 Osteria Veglio specializes in traditional, precisely rendered Piedmontese classics (vitello tonnato, tajarin, bunet), but seafood dishes are available too. The ingredients are first-rate; the chefs, for example, often hit the road very early in the morning to buy the best possible fish at Turin’s market. My most recent meal at Veglio was outstanding – in fact, the best I’ve ever had there. I had invited three very famous French winemakers and their wives, individuals who are used to the finer things in life, and they came away just as impressed by the Osteria Veglio experience as I was. 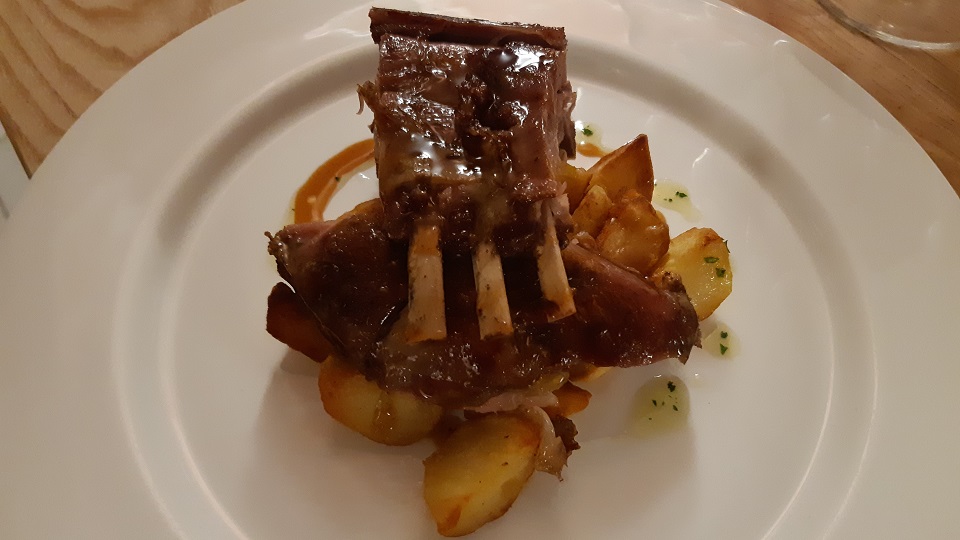 On this night, the vitello tonnato was its usual standout self, the tuna lending pungency of flavor and creamy support to the precisely cooked and thinly sliced veal. The tajarin had just the right spring to their texture, and the meat sauce was both flavorful and present in the right amount. Tripe is one of my favorite dishes – along with innards in general, though it really couldn’t be otherwise with any true denizen of Rome – and Veglio’s tripe is some of the best I’ve had outside of the capital city, so that’s real praise. The roast kid was succulent and flavorful, and the very traditional Piedmontese desserts that I can never get enough of (bunet, panna cotta) were perfectly rendered. 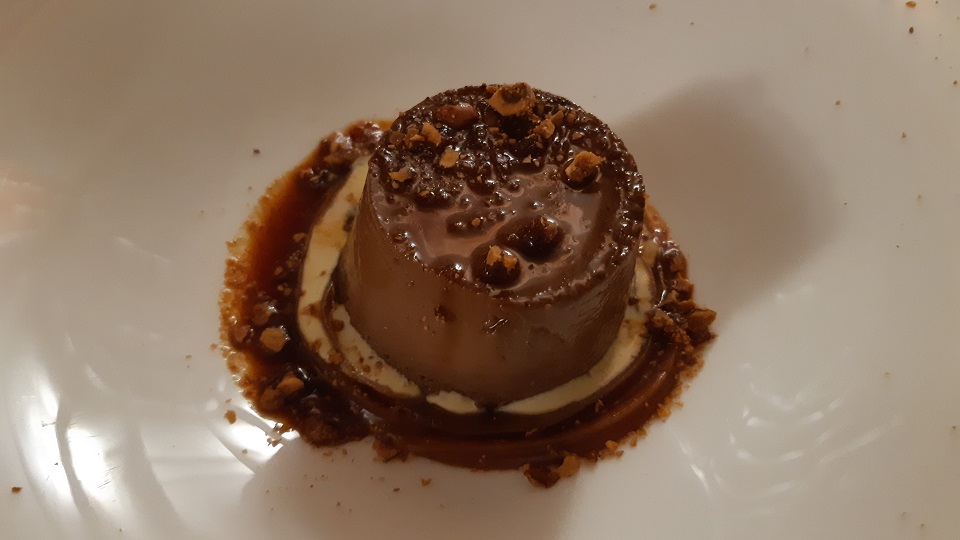 Osteria Veglio’s wine list, like the food, was always good, but it has also steadily improved over the years. Of course, it offers many different Barolos, with all the big and usual names well represented, but there has also been a conscious and commendable effort to include wines made from lesser-known and underrated Langhe varieties, such as Freisa. Some readers might find it curious that Osteria Veglio boasts a page (slightly more, actually) devoted to Rieslings made outside of Italy, but in fact Riesling is so popular in Italy right now that numerous restaurants all over the country offer “Riesling lists” (and many Piedmontese producers are now trying their hand at the grape, with mixed results). Furthermore, Katharina Zahn loves Riesling, so the strong presence of these wines in Osteria Veglio’s wine list is no surprise. 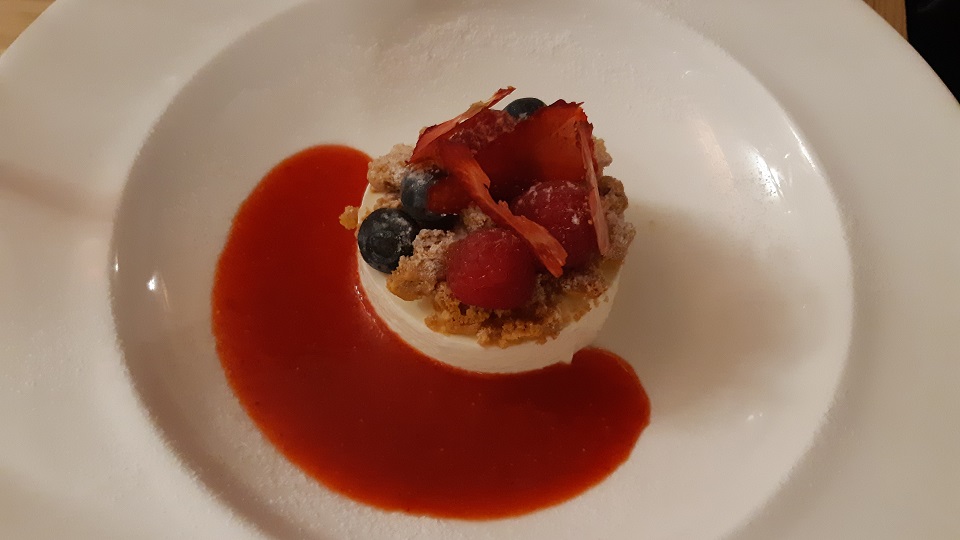 Our group kicked off with a surefire crowd pleaser, the 2017 Giovanni Almondo Arneis Roero Bricco delle Ciliegie. Despite the hot vintage, it proved sufficiently bright and focused in its white flower, nectarine and soft citrus aromas and flavors. This lovely wine impressed my French guests (it’s always a good sign when the French start touting the merits of an Italian wine!), but I have had more chiseled, well-delineated vintages of this wine. Let’s face it, 2017 was just too darn hot. Next up was the 2015 Wittmann Riesling Kirchspiel GG Rheinhessen, an outstanding German Riesling that provided a little more body and savory oomph than the Arneis, following up neatly on that wine’s fresher mouthfeel. It also provided more texture with some of the evening’s fleshier, more tactile dishes. These two very different whites were, in their respective ways, absolutely spot on for this meal. Freisa is a grape variety that is currently going though hard times, as its tough tannins, which require years of patience before finally smoothing out, are not everyone’s cup of tea. But the variety can give wines that are exceptionally perfumed and remarkably complex, not to mention spectacularly ageworthy. In my experience, at 15-20 years from the vintage, wines made with Freisa can be not just delicious, but also very hard to distinguish from Barolo – which is not surprising at all, given that Nebbiolo and Freisa are relatives, and extremely close ones at that. 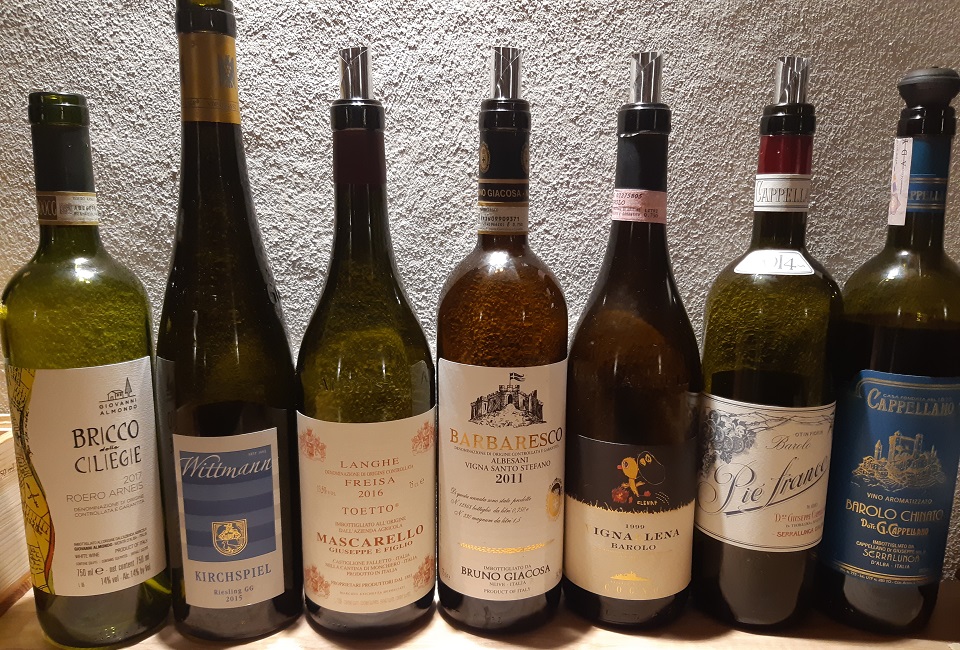 The 2016 Giuseppe Mascarello & Figlio Freisa Langhe Toetto is still very young and austere, and unless one has acquired a taste for young Freisas, probably tough going right now, but it showed very pure strawberry aromas and flavors nicely framed by mineral nuances and citrusy acidity that speak of a long, healthy life ahead. I have no doubt it will prove a splendid drink about five to eight years down the road. Unfortunately, the 2014 Cappellano Barolo Otin Fiorin Pié Franco was too evolved and not what it should have been, possibly because of a not-quite-perfect cork. It happens. Happily, the 2011 Bruno Giacosa Barbaresco Albesani Vigna Santo Stefano had no such issues, and confirmed itself as a wine of early appeal loaded with easy charm. It’s drinking beautifully right now, a refined and silky quaff redolent of ripe red cherry and rose petal aromas and flavors, though this specific bottle seemed a little more evolved compared to other bottles of this wine I have tried recently. We ended the meal with a Piedmontese classic, the always exceptionally good NV Cappellano Barolo Chinato. From the house that invented it, this is a Chinato of real pedigree: long, suave, complex and rich, featuring lovely, lingering notes of quinine and dark berries and a very typical resiny nuance (typical of this estate’s version of Chinato, that is). It provided a wonderful and very Langhe way to bring our dinner to a close.

The food at Osteria Veglio is classically prepared and extremely well-focused. Of late it also strikes me as being even more exceptionally rendered than usual. While there’s no reason to suppose things won’t remain as great as they are now, my advice is to dine at Osteria Veglio while it’s red-hot and firing on all cylinders.