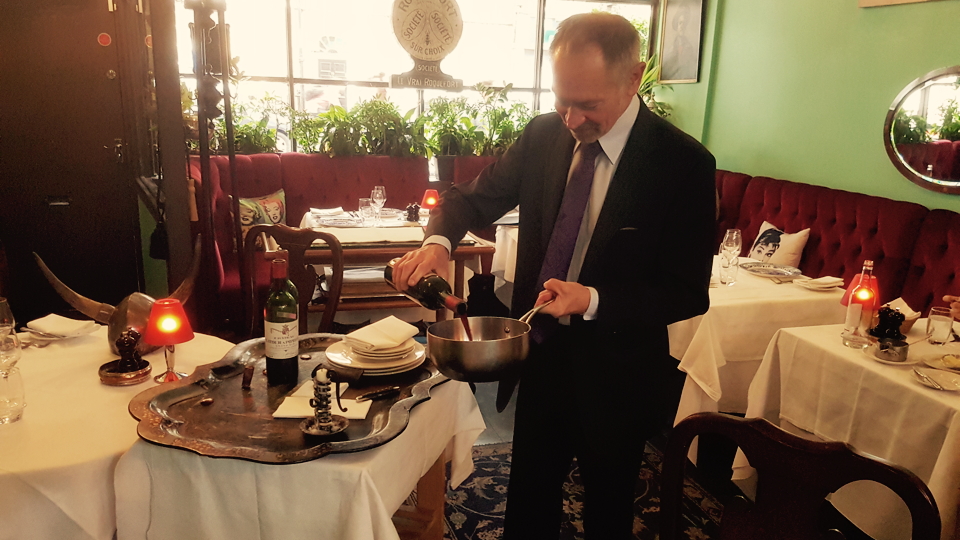 The evidence. That red liquid you see pouring into the saucepan is a pristine bottle of 1964 Lafleur.

Otto Tepasse pours the ‘1964 Petrus into a saucepan to season his reduction and doubtless at that precise moment, Jean-Claude Berrouet feels an inexplicable cold shiver pass through his core. Our whirling dervish of a maître d’ is not finished. No sir. As this legendary Pomerol bubbles away, the 1964 Lafleur screams for mercy as it is martyred in similar fashion to add a little “je ne sais quoi” to this increasingly expensive sauce. My bewilderment and disbelief are soon usurped by admiration. In this pious age where wine is often measured by monetary worth, Otto’s brazen act is a timely reminder that rules are there to be broken. Life is about not thinking but doing the unforgivable; consequences be damned. This treasonable act should be celebrated. Go for it my friend!

His wily frame brandishes the third bottle, no less than 1964 Latour-à-Pomerol. His audience of three guests along with Bacchus himself, laugh, cheer and applaud.

There is still one bottle per sybarite so we will not go thirsty this afternoon.

This was unlike any other lunch that I have attended. Each year I meet with bon viveur Lord Bruce and his trusted butler Gareth Birchley so that together we can put the world to right and to paraphrase Withnail himself, enjoy the finest food and wine known to mankind. I had prepared a bottle of Claret in advance, however Birchley advised me not to bother, signalling that my contribution would be overawed by Lord Bruce’s munificence. I will broach this vinous trio after telling you all about Otto’s because you might never heard of this dying breed of restaurant, the kind that must be cherished.

Following this year’s personal upheaval, I was determined not to miss our annual meet-up.

I had wanted to visit Otto’s for many moons, but as I walked from Chancery Lane up Grays Inn Road, I was perturbed by this rather scruffy part of London, replete with Tesco Metro and second-hand mobile phone shops and dog-eared boozers. Next to a dry-cleaner you find Otto’s, a black awning and a handful of potted greenery brightening up on the facade. Perhaps its mundane locale tricks the unsuspecting first-timer into lowering their guard because the interior comes as a shock: old school Parisian decadence. 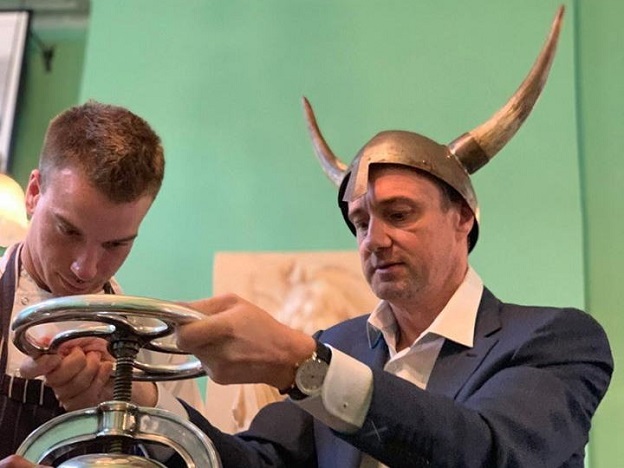 Lying in hospital recovering from open-heart surgery I did not imagine this scenario just a few weeks later.

Otto’s is essentially homage to that French institution, “Tour d’Argent”, the restaurant on the banks of the Seine and the bastion of traditional French cuisine since time immemorial. These restaurants have two things in common. Both use antique presses that are theatrically wheeled to your table, whereupon your chicken or lobster is squeezed with each turn of the screw in order to eke every drop of flavour-rich juice. The difference is that at Tour d’Argent the waiter will turn the press whereas Otto insists that first-timers don a ludicrously horned metal Viking’s helmet and turn the screw themselves. It is completely mad, but we need frivolity and silliness more and more these days. The second common feature is Otto himself. He worked at Tour d’Argent before moving to these shores to work at Mirabelle in its heyday, before opening his namesake restaurant in 2011. However, its ambiance deceives you into thinking Otto’s has existed for years.

We pre-arranged a special lunch menu centred upon seasonal grouse. September is the perfect time to eat this game, in my opinion better than immediately after hunting season begins on the Glorious Twelfth. My theory is that the first shot birds must be the most stupid. If you were a grouse, wouldn’t you choose to stay at home instead of flying outside every 12 August? 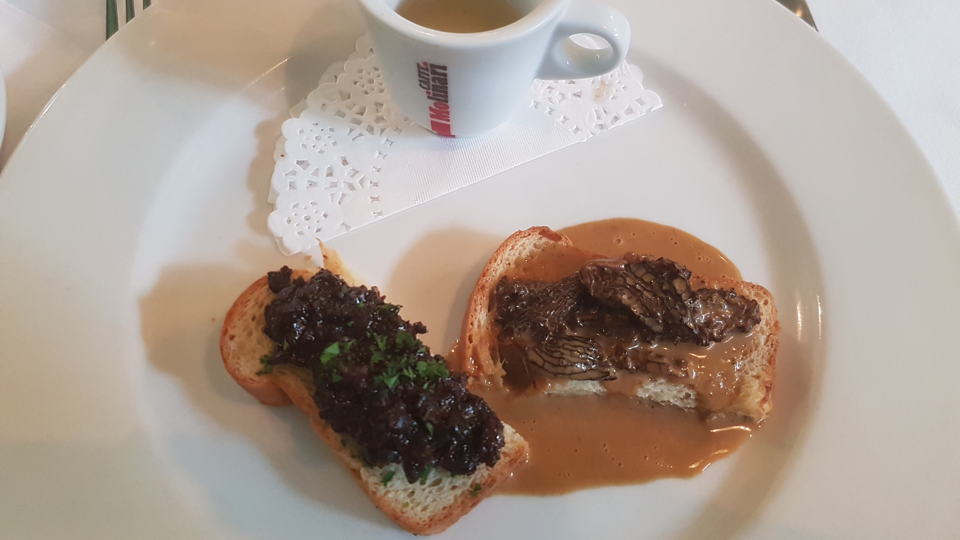 Grouse livers on brioche toast. Not something one you consume every day after heart surgery, but one day shouldn’t do too much harm.

Had my heart surgeon walked into Otto’s, as I consumed more calories per mouthful than the entire previous month, then he would have wondered if my heart op was worth it. So, I played as safe as I could with a starter of sautéed wild mushrooms on toasted brioche, foie gras poêlé and truffle sauce, all mouth-wateringly delicious. I am not obsessed about food and wine matching, but fungi such as morels and girolles are ideal matches for mature Pomerol. The brioche was perfect and the sauces strong but not overpowering. We shared a plate of boned pig’s trotter stuffed with calf’s sweetbread and morels that seemed to melt in the mouth, its deliciousness only equalled by pangs of guilt indulging in such gustatory decadence. 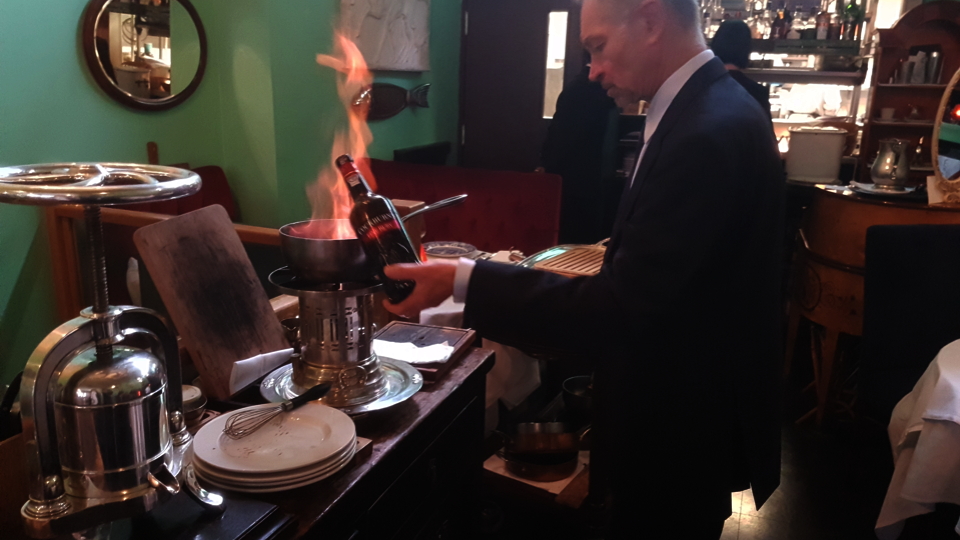 Otto had at work with this antique silver press, mid-flambé. Thankfully by this time he was no longer using our 1964 Pomerols for his reduction.

Now it was time for the main course, though more accurately it was theatre with Otto its star. The action happens around your table. The restaurant offers “Canard de Rouen à la Press” and “Homard à la Presse”, duck and lobster, which must be pre-ordered. These antique presses are made of solid silver, so rare and valuable that apparently burglars recently tried to break in and steal one. The bird is presented whole for inspection, then disappears into the kitchen and returns as tender slices. The rest enters the press. Otto ignites a burner and creates the reduction for his audience (the 1964 Pomerol seasoning is optional.)

We ate two courses, the first with the grouse livers, sautéed and served on warm brioche and morels, tangy and rich, though not has gamey as I expected. The main course of grouse bathed in the reduced sauce, served with a bowl of potato soufflé, was ineffably delicious. Of course, it was perfectly cooked, perfectly pink and perfectly seasoned. It is not the very best grouse that I have eaten, but it was up among the best. By this time my stomach was full and yet I could not resist the tarte tatin with a boule of vanilla ice-cream. 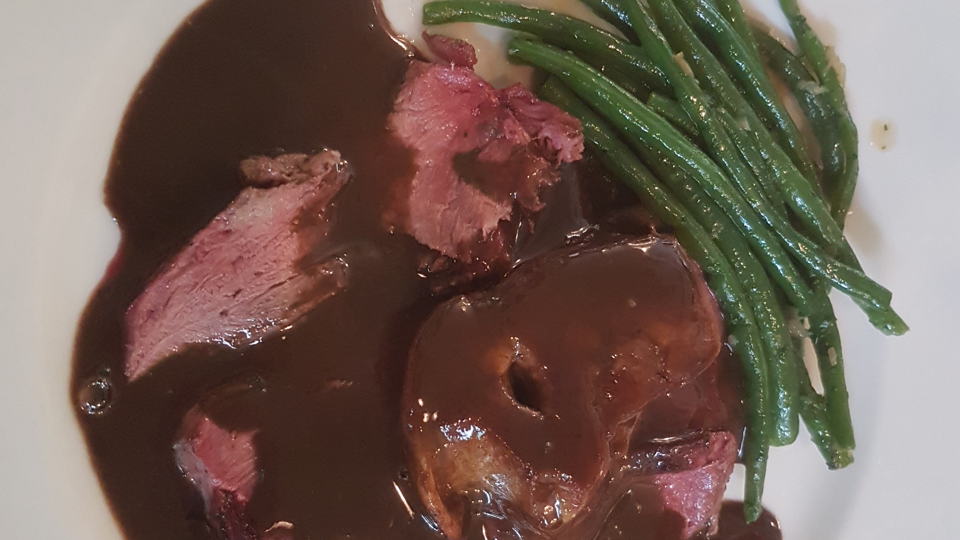 This photograph does not quite capture the richness of the reduced sause that smothered the grouse.

Now it was time for the three Pomerols. What a privilege, drinking these legends side-by-side and observing their transformation with aeration over the course of hours. Jean-Claude Berrouet made two of these wines. In fact, when sitting next to him in September during the 2019 harvest, I showed him a photograph of the bottles, prompting Berrouet to recall how Jean-Pierre Moueix recruited him fresh out of his oenological studies. He had never even tasted Petrus before he was charged with making the 1964. These bottles all had outstanding provenance, purchased in the Seventies and stored in a perfect cellar in West London, the Lafleur from an original wooden case.

The 1964 Latour-à-Pomerol comes from the end of a golden era for this Pomerol cru. It is a wine that I have tasted two or three times previously and one that lies in the shadow of the 1964 Petrus. It shows more maturity in colour than either the Petrus or Lafleur with visible bricking on the rim but still has a fairly deep core. Initially it is the most flamboyant of the trio with ebullient red fruit, kirsch, sandalwood and bay leaf, then after a couple of hours it develops a distinct menthol aroma. The palate is beautifully defined, perhaps with a soupçon of volatile acidity, the red fruit laced with clove framed by fine tannins. It feels pliant in the mouth, silky in texture with a subtle crescendo towards the finish. I find this Pomerol to be the most sensual of the three and it remains a wonderful wine. The 1964 Lafleur is the biggest surprise. It is a very rare wine, a magnum encountered several years ago was disappointing. Consequently, my expectations were modest, though co-proprietor Baptiste Guinaudeau recently assured that there exist far superior bottles. This was clearly one of those. It has a mercurial bouquet that delivers Indian spice and cardamom aromas at first, later tobacco, Montecristo cigars and a light brine-like influence. After a couple of hours, I notice a whiff of antique furniture and furniture polish. Yes, this is more bucolic than the 1964 Latour-à-Pomerol, yet utterly compelling. Perhaps this bottle is the one that most demonstrates melioration with aeration in the glass, finishing up just a couple of paces behind Petrus. Initially it manifests red fruit, followed by darker, sultrier fruit with time. Then-proprietors Marie and Thérèse Robin conjured a magnificent Lafleur. 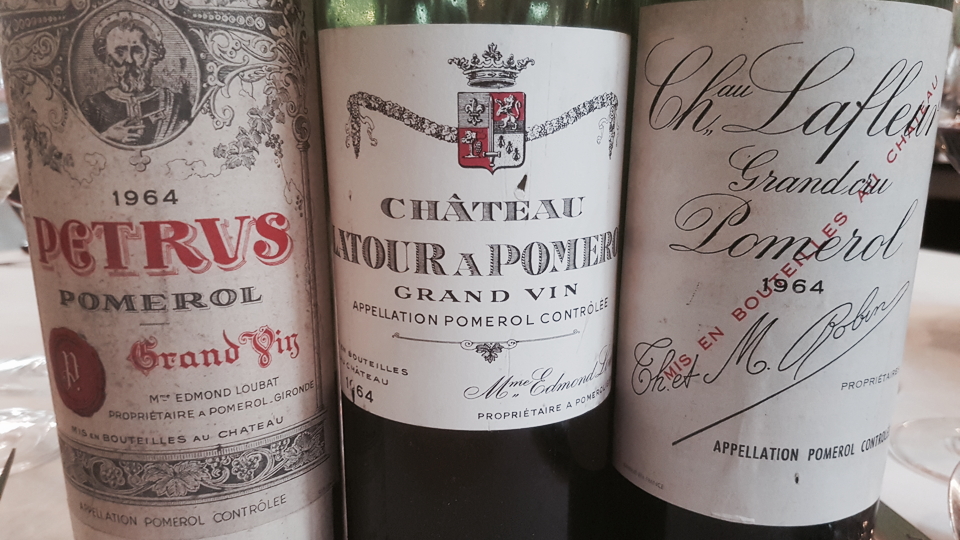 The 1964 Petrus sports the deepest colour of the three Pomerols. It is one of the finest bottles that I have met: dark berry fruit, freshly tilled earth, a sprig of wild mint, hints of bay leaf all delivered with impeccable precision and focus. This is a bouquet that you can easily lose yourself within. The palate is sublime with sappy red fruit, mulberry, thyme and clove, fanning out towards the finish that is fathomlessly deep. The harmony in this Pomerol is otherworldly and I feel it is blessed with the greatest persistence of the three. At 55-years of age, the brilliance of this Petrus remains undiminished.

It was an afternoon like no other: the theatre of Otto’s and Otto himself, the decadence of the food and this triptych of astonishing Pomerol. All of it would have been pointless without commensurate company, and the banter flowed as freely as the wine. How do we top this year’s lunch, I have absolutely no idea, but you can guarantee that however it transpires, it will be recounted here on Vinous Table.

Thanks to Lord Bruce for so generously providing the bottle for lunch.